Written by Art Williams, Photographs by Michael Amador | From the May 2009 issue | Updated: August 4, 2020 | Filed Under: TRAVEL 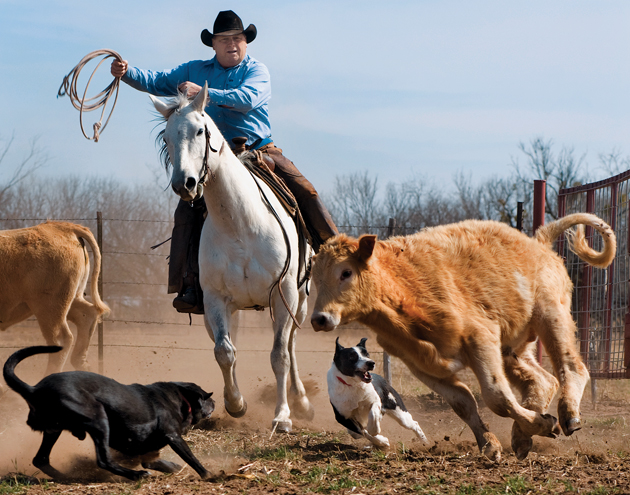 Texas’ Rolling Plains hold secrets. The vastness draws the eye to the horizon. The dominating sky smoothes and conceals features, giving an impression of sameness, even emptiness. What lies between here and that distant mesa? More gently rolling prairie and mesquite flats, probably. Is the distance five miles or 15?

In 1854, during his trip through badlands near present-day Seymour, U.S. Army Captain Randolph Marcy wrote, “It is a land I doubt will be inhabited into the next century.”

Unbeknownst to Marcy, perhaps, the Texas plains had already been inhabited for thousands of years-first by stone-age hunters, followed by Neolithic farming peoples, and then, during Marcy’s time, by the mighty Comanche, who often baffled pursuing Texas Rangers, bounty hunters, and the U.S. Army by vanishing in the seemingly bare, featureless prairie.

“I want to show you something,” says Randy Walker, co-owner of Ranger Creek Ranch, as he downshifts his Land Cruiser into second gear. “This always amazes visitors.”

We leave the ranch headquarters, about 18 miles west of Seymour, and drive northwest through cropland and mesquite flats toward the South Fork of the Wichita River. Though it’s early February, the air smells of juniper and sun-warmed soil. As we start up a slight rise, a wild hog crosses the road in front of us.

We top the rise, and the plains fall away into red, gypsum-striped buttes, scenic mesas, cedar-studded draws, and clear springs flowing over Permian clay. *Northward, near the horizon, on the legendary Waggoner Ranch, ochre cliffs, lit by the early afternoon sun, rise above the Wichita River.

Little wonder the Comanche could quietly vanish. Looking out over these badlands, I want to strap on a backpack and vanish for awhile too.

Ranger Creek is a working cattle ranch, primarily a cow-calf operation. The horses, cattle, cowdogs, pens, and tack aren’t for show. However, in the 1980s, like many Texas ranchers, Randy and Ranell Walker and Ranell’s parents, Gaylon and Joyce Scott, began looking for ways to diversify operations. In 1988, they hosted their first dove hunters.

They soon realized that people would enjoy coming to the ranch just to escape urban bustle for a few days. So the “adventure” side of the Ranger Creek was born. Nowadays, in addition to hunters, the extensive spread hosts hikers, mountain bikers, birders, equestrians, and urban dwellers looking for a few days of prairie wind and birdsong.

After hors d’oeuvres-bacon-wrapped shrimp and jalapeños, I enjoy a supper of mesquite-grilled steak, steakhouse potatoes (sliced and baked with a cream sauce, onions, bacon, and cheese), and a spring-mix salad with feta cheese, sauteed tomatoes, and homemade balsamic vinaigrette dressing.

Don’t expect structured dude ranch activities. “If you just want to hike, we’ll give you a map and turn you loose,” Randy says. “If you want to drive around the place, we’ll rent you our Jeep or ATV, or you can use your own truck.”

Some visitors want to watch and even participate in daily ranch work. “I get a lot of folks who just want to ride around and help feed the livestock,” Gaylon says. Randy trains and works some of the best cowdogs in the country, and when schedules and circumstances allow, guests can ride horses into the pastures to watch cowhands and cowdogs at work. Some of the most exciting action takes place during branding in April and weaning in October and November.

My first morning at the ranch, I watch as Randy’s dogs, Buster and Bubba, a pair of Catahoula-border collie mixes, and Leo, a Catahoula cur, tear across a pasture toward a dozen or so wild, scattered yearlings. Within a couple of minutes, the dogs have the steers bunched and heading to a designated corner. Woe be to any hardhead that tries to go his own way. Sharp barks and bared teeth send him high-kicking and bawling back to the herd.

Fancy yourself good with horses? Feel free to choose and saddle your own. If, on the other hand, you’ve never ridden, you’ll get all the help you need.

“I ask folks to be completely honest about their horsemanship,” Randy says. “That way, I can match the horse to the person’s experience and ability!”

Depending on the season, birders can expect several raptor species and scores of grassland birds. An informal list kept by the ranch staff boasts 68 species. The guess is that there are many more.

After watching the dogs, I hike down into the river breaks and spring-fed creeks. Mockingbirds, cardinals, golden-fronted woodpeckers, lark buntings, tufted titmice, and several kinds of sparrows and warblers forage in the cedar and mesquite. Hawks and turkey vultures hunt overhead. Roadrunners … well … run the road. I list the species in my notebook and imagine western kingbirds, scissor-tailed flycatchers, Swainson’s hawks, and other spring migrants arriving in a few weeks.

On the small lakes and ponds, wary late-season waterfowl flush before I can get a good look with binoculars. When I return, I’ll bring a spotting scope.

Numerous hunting blinds also serve as prime spots for general wildlife viewing. In the damp, red sand along one creek, I find tracks of coyote, bobcat, turkey, deer, wild hogs, and raccoon. In big, wild country, I’m always torn between covering ground to see what’s over the next rise and picking a spot like this one and watching quietly, from downwind.

Now, the sun is overhead. Except for sparrows and juncos flitting in the brush, most wild things seem to be keeping to cover. There’s more country here than I can explore in a year, so I’ll keep walking. With luck, I’ll find a perfect place to sit and watch when furtive rustling begins just before dark