Where Aloe is King 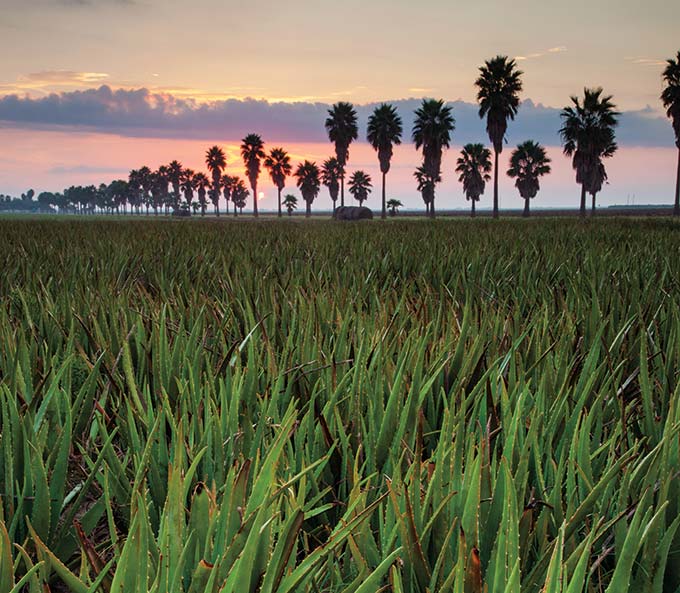 Luxuriating in the tropically landscaped oasis of Hilltop Gardens, I feel sheltered from the world by palms, hibiscus, and birds of paradise. The Inn at Hilltop, a Mexican Colonial/Mediterranean-style B&B, perches on a rise at the Rio Grande Valley site west of Lyford, surrounded by fields of aloe vera, vegetables, and sugarcane. It’s a magnet for those seeking a warm and tranquil winter haven. 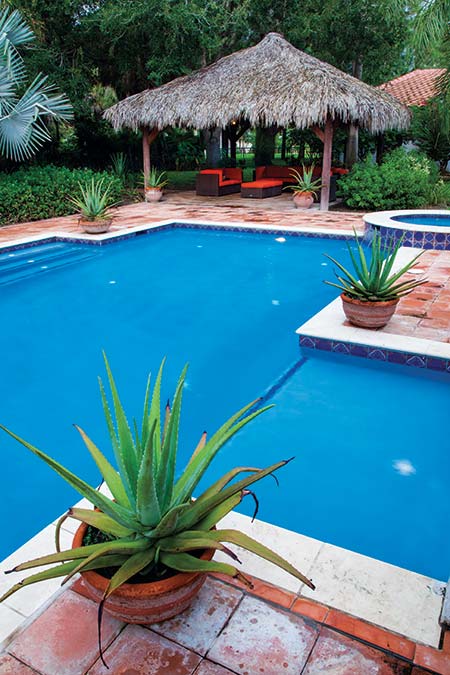 Hilltop’s 12 acres of botanical gardens contain one of the nation’s largest public collections of aloes—more than 200 species expertly landscaped and labeled—along with sensory gardens and a healing garden, shaded by royal poinciana, wild olive, and orange-and-yellow-bloomed caesalpinia trees.

In 1939, Lee Ewald and her husband Sherman bought 100 acres to start Hilltop Garden Nursery, placing their house on the miniature hilltop. When Ewald saw workers breaking off leaves from aloe vera in the gardens around the house and rubbing the transparent gel on wounds, she began researching the succulent plant, sometimes called “relief in a leaf.” The Ewalds started their commercial aloe farm—among the first in the country—that same year.

For dinner, head northeast to Raymondville’s Casa Blanca Restaurant (956/689-3230), a local fixture with a friendly vibe and the best Southern fried chicken around. Or try the juicy hamburgers at the Boot Company Bar & Grill (956/689-3850).

Part of the Lower Rio Grande Valley National Wildlife Refuge, three fabled salt lakes fan north of Hilltop. From the junction of Texas 186 and Texas 1761, head north to the interpretive kiosk at East Lake or La Sal Blanca. Accessible only by foot, the wildlife refuge’s lake is a little more than a mile down a caliche track bordered by a “Watch for Ocelot” sign, yucca, and mesquite. Also watch for nilgai, deer, quail, and groove-billed anis. What looks like a snowfield is all salt, 99.9 percent pure. The salt crunches underfoot as you trek across the hard, white surface, and the salt crystals sparkle like glass shards. At points, your feet sink into soft salt, and the footprints rapidly fill up with brine. An underground salt dome pushes up the salt, which has supplied Native Americans, Spanish pioneers, and Valley ranchers.

The Willacy County Historical Museum (956/689-2668), housed in a 1927 brick school in Raymondville, gives glimpses of the deep South Texas frontier. Mifflin Kenedy, who made his fortune running Rio Grande steamboats during and after the Civil War, established his La Parra Ranch nearby. Artifacts include the 30-pound metal vest Kenedy wore for protection (from bushwhackers and bandits), sidesaddles, a rug of 10 coyote skins, and two battered but beautiful terra cotta roundels in the style of 15th-Century Italian sculptor Luca della Robbia. Also on display is a segment of La Parra’s hand-hewn cypress fence and gate, which crossed the Corpus Christi-Alice-Brownsville stagecoach road until 1904. Don’t miss the museum’s 1545 astrolabe, the world’s oldest example of the ancient navigation tool. It was recovered in 1967 along with other treasures from the 1554 wreck of Espiritu Santo, one of three Spanish cargo ships that sank in a storm due east of here off South Padre Island. Take time to cruise down county roads under some 300 wind turbines, which look like unsynchronized swimmers, three arms flailing away in the southeast breeze.

One of the first documentations of aloe’s healing properties dates to more than 3,500 years ago in Egypt. Transplanted to the Americas with early Spanish explorers, aloe became part of the folk medicine of many cultures and was used to treat cuts, burns, and insect bites. After experimenting to find a stable formula for aloe gel, Ewald and her daughters, chemist Phyllis Schmidt and physician Ann Bates, pioneered the use of aloe gel in cosmetics with Phyllisann Lee Sales brand aloe creams in 1959. Their aloe products soon included baby lotion, shampoo, aftershave, and suntan lotions.

Today, 50 acres of aloe vera and more than 250 palm trees border the road that leads my husband Guy and me up to the two-story inn’s carved wooden doors. The white stucco exterior, red-tile roof, and lush bougainvillea remind us of Hacienda Santa Engracia, a 200-year-old retreat near Ciudad Victoria, Mexico, that we used to visit for peace and pampering. Hilltop’s B&B captures the old hacienda’s serenity with high ceilings crossed with wooden vigas, cool Saltillo tile floors, French doors admitting filtered light, colorful pottery, and carved armoires and tables. The Texas version includes a hibiscus bouquet in our tropical garden-themed room.

After we discover the palapa, an opened-sided, thatched cabana overlooking the heated pool in the B&B’s private garden, we grab our Nooks. I drape myself on a cushioned rattan couch in the palapa and listen to the sounds of breeze-blown bamboo, green jays, and water cascading into the pool.

The B&B welcomed its first guests in 2012, 24 years after a Korean corporation took over the farm (it’s now part of the Econet family of companies). Hilltop later built the visitor center and public botanical and aloe gardens, and added organic vegetables to the commercial aloe fields. The gardens close to the public at 4:30 p.m., but inn guests can roam the grounds by moonlight and low-wattage lights. That evening, we paddle in the pool with stars twinkling overhead. The silence is broken by cicadas and a screech owl’s trill.

Two walls of windows showcase the pool, banana trees, and ferns as we settle in the breakfast room with Joseph Kim, Hilltop’s executive vice president. He talks about the 517 certified organic acres surrounding the B&B, where Hilltop grows Swiss chard, kale, cilantro, and other greens sold under the “Plantation Produce” label in Texas and on the East Coast. A bowl of diced fresh fruit starts our breakfasts of eggs, potatoes, bacon, and toast. The slightly tart jelly is made from Hilltop grapes and sweetened with agave nectar. 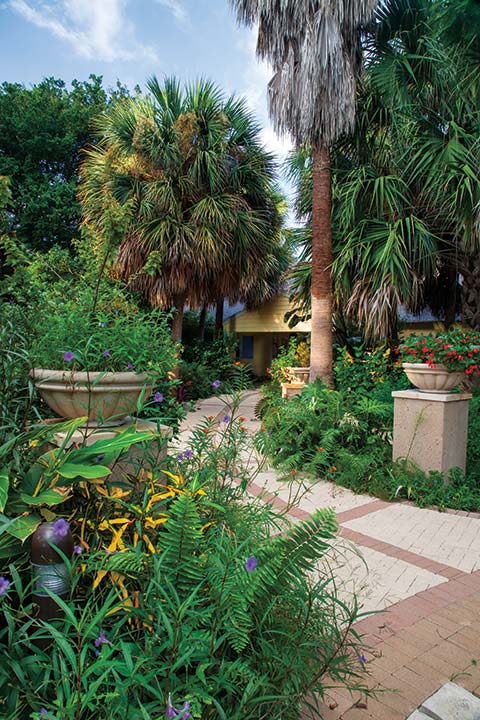 Paul Thornton, the botanical garden manager, guides us through the different gardens as buff-bellied hummingbirds dart about, feasting on native plants. At the Memorial Aloe Garden, 220 different aloes are identified by their African country of origin and common names like tiger tooth aloe, rocket aloe, red hot poker, and jeweled aloe.

“In a species garden, it’s all about the differences: color, texture, shape, and bloom style,” Paul explains. Plump, narrow, striped, streaked, spotted, huge, twisted, and delicate aloe leaves characterize different specimens from Zambia, South Africa, and Madagascar. Some grow 40 feet tall, while others creep along the ground. I love the aloe that looks like arm-wrestling octopuses.

The sensory gardens that circle the visitor center form a verdant mini-jungle. Local citrus and palms interspersed with Hawaiian and Filipino plants crowd the curving paths where we see, touch, and smell plumbago, Turk’s cap, guava, chile pequin, and dragon fruit cactus. The walled Healing Garden, centered by a long reflecting pool and rimmed by fragrant basil and rosemary, offers a quiet refuge for mind, body, and spirit. The gardens, and particularly the inn, are geared to adults, although a children’s garden with a small rock-rimmed pond welcomes well-behaved youngsters.

In the Hilltop Gardens gift shop, we stock up on whole leaf aloe gel and moisturizer, and then step into the visitor center, built on the footprint of the Ewalds’ farmhouse to preserve the tropical gardens. A video covers Hilltop’s aloe and organic farms, showing the seasonal cycle, and I pause to reflect on the traveler’s oasis that Hilltop Gardens has become. Much like the healing properties of the aloe lining the fields around us, we are soothed and restored by this tropical getaway.