Home tour and holiday events on the square 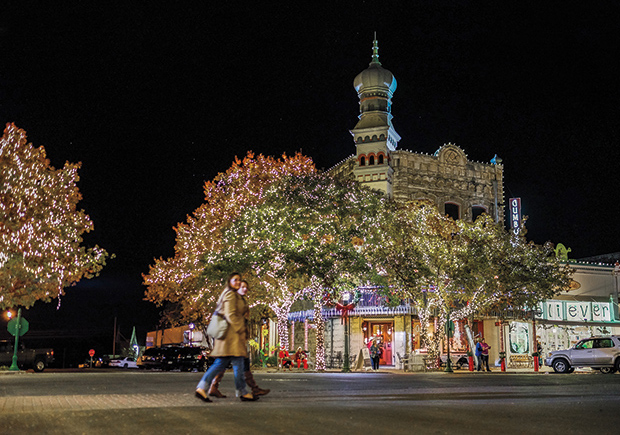 Strictly speaking, Georgetown isn’t exactly a small town; with just under 65,000 residents, it can probably be better described as small-ish or maybe medium-sized. But anyone who has spent time here around the holidays, when every tree and building on the square is ablaze with lights, can see that in spirit, Georgetown is the epitome of a small town. Despite its designation by the U.S. Census Bureau as one of America’s fastest-growing cities, it remains the kind of place where folks greet each other by name, regard their neighbors as extended family, and welcome visitors as if they were old friends.

The Georgetown Christmas Stroll takes place on and around the Williamson County Courthouse square Dec. 2 (5-9 p.m.) and Dec. 3 (10 a.m.-8 p.m.) For more information, call 512/868-8675; www.downtowngeorgetownassociationtx.org. See www.georgetownheritagesociety.org for details about the home tour on Dec. 10-11.

For general information about Georgetown, including lodging, restaurants, events, and attractions, call 800/436-8696.

Even winter weather can’t dampen the enthusiasm of those who put on Georgetown’s annual holiday celebration, which begins with a tree lighting on the courthouse square on the day after Thanksgiving. The following weekend marks the city’s beloved Christmas Stroll, a two-day event that has its origins in 1960, when a handful of local craftsmen got together in the heart of town to sell their wares in the days leading up to Christmas. In the decades since that first loosely organized market, the event has evolved to include a crowded schedule of family-friendly activities.

This year marks the 36th annual Stroll, which begins with choirs of schoolchildren serenading visitors with carols and ends the next evening with a visit from Santa. The Saturday Christmas Market now features more than 150 vendors selling gourmet foods, crafts, and other handmade holiday gifts; entertainment on three stages; and a Dr. Seuss-inspired “Whoo Village” that offers cookie-decorating and crafts stations for kids.

The town’s festivities continue the following weekend, when the Georgetown Heritage Society’s Holiday Home Tour will showcase five privately owned historic houses that exemplify this year’s Mid-Century Modern theme. The former Grace Episcopal Church, built in 1881 and now the Grace Heritage Center, will serve as the tour’s hospitality center and home base, from which guests can walk to the homes featured on the tour.

This year, organizers expect more than 40,000 residents and visitors to attend the town’s holiday events, a far cry from the 500 or so who showed up for the first Stroll back in 1980.

Staging such an undertaking year after year requires the efforts of a small army, and it is in this respect that Georgetown has a leg up on some other towns. In part because it is home to 176-year-old Southwestern University, a private liberal-arts college and Texas’ oldest post-secondary school, the city enjoys the benefits of a dynamic and supremely civic-minded core group of citizens who love promoting Georgetown’s charms to visitors.

Nell Benold is one of those citizens who moved to Georgetown to attend college and never left. A resident since 1946, she says that the early holiday festivities differed widely from the events that visitors experience today.

“The church choirs met on Austin Avenue, then sang as we walked to the square,” she recalls. “As we approached, the lights on the square came on to signify the light of Christ. It was very sincere and simple; not at all elaborate. There were candles in all the trees, and you could smell the chestnuts roasting.”

But despite the growth of the town, Benold insists that the spirit of the original event remains.“It’s still a wonderful community effort by all of us who love this town,” she says, “and a gathering that is a true celebration of and by Georgetown’s community.”

Benold’s longtime friend Jeannine Fairburn moved to town in 1971, when the population hovered around 6,000. A military wife, she had moved quite a bit during her married life, but says that Georgetown fit her like a glove. “This is still the friendliest town I’ve ever seen,” Fairburn says. “Those of us who have been here awhile have seen great changes. But as we grow, we still keep that small-town friendliness. People are really proud of Georgetown, and you can feel it dur-ing the Stroll.”

Some Stroll visitors stay at the Sweet Lemon Inn & Kitchen, a boutique hotel and farm-to-table restaurant housed in a converted 1918 home in a prime location just off the square. The three-room inn can accommodate groups up to 10, and features well-appointed suites with modern furnishings and kitchenettes, plus quaint touches such as clawfoot tubs. The town also boasts several chain hotels—including a brand-new Sheraton—as well as a handful of other inns and B&Bs.

Georgetown, which bills itself as “The Red Poppy Capital of Texas,” retains its focus on tourism throughout the year, hosting the Red Poppy Festival in the spring, a wine and music celebration in September,
ghost tours and a carnival around Halloween, and live music, art exhibits, market days, farmers markets, and First Fridays On The Square year round.

But when it comes to experiencing the true magic of Georgetown, residents say it’s hard to beat the holidays.

“When the lights go on and every-one gathers together, in some ways, it still feels like the 1940s and ’50s,” Benold says. “It’s impossible to explain, and something you just need to see for yourself to really understand.”