Exploring an urban preserve in Austin 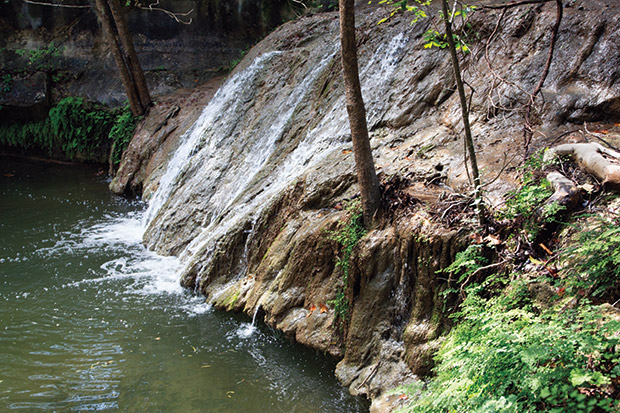 When some long-overdue rain last July relieved drought conditions in the Austin area, my thoughts turned to Wild Basin Wilderness Preserve, a 227-acre expanse of woodlands west of downtown.

I visit the park frequently to photograph wildflowers and other nature subjects, and I was curious if the preserve’s waterfall had begun to flow again. A short trail—less than a mile-and-a-half, round-trip—leads down past limestone outcroppings and stands of Ashe juniper to the place where Bee Creek, which flows from west to east across the property, descends over a wide incline of rock into a pool below. To my relief, I found the creek again rushing down that slope and into a natural pool ringed with newly green ferns within sight of sycamore and cottonwood trees.

The “wild” in Wild Basin could also stand for “wildflowers.” Several springs in a row, I’ve stopped at the entranceway to admire stands of mountain pinks. A single plant can widen into a densely packed dome of tapering, bullet-like buds and gorgeous pink flowers by the dozens. The property hosts many other spring wildflowers with picturesque names. Blue stars produce flowers whose five cool-white petals make them look like propellers or stylized stars. The diminutive Dutchman’s breeches resemble old-fashioned pantaloons from Holland. In the summer, woolly ironweed has fuzzy whitish buds and rich purple flowers. On an October visit, I saw my first Great Plains ladies’ tresses orchid of the season; in the 1800s, the plant’s rising spirals of white flowers reminded people of braids of women’s hair. I also saw more flowering stands of tatalencho (a shrubby plant with clusters of yellow flowers and a woody stem) than I’ve ever seen anywhere else in Central Texas.

The Wild Basin Wilderness Preserve has graced the hills on the west side of town for decades, yet many Austin-area residents and visitors remain unaware of it. And, in fact, the preserve might not exist today were it not for the vision of seven Austin women who saw beauty where many others saw prime real estate for development. In the 1970s, the women, members of the environmental group Now or Never who would soon be known as “the little old ladies in tennis shoes,” embarked to protect the land from housing or retail development and took on its preservation as their Bicentennial project. Persevering through various setbacks, the group gradually secured parcel after parcel, and by the 1980s, the preserve reached its current size.

Of the 227 acres that make up Wild Basin today, Travis County owns 164 and St. Edward’s University owns the other 63. The university backing is important because St. Edward’s operates the Wild Basin Creative Research Center, the educational heart of the preserve. Between 1,000 and 1,500 schoolchildren a year participate in class trips to Wild Basin, where they take guided hikes and explore environmental topics such as geology and how to identify wildlife and plants. At a higher level, faculty and students from St. Edward’s carry out scientific research throughout the year.

Trails at Wild Basin total 2.5 miles in length, and they intersect in enough places that visitors can follow loops of varying length and difficulty. The shortest and most level circuit is the Arroyo Vista Loop, which is the one closest to the parking area. Near the farthest point along that trail, a scenic overlook offers visitors their most expansive view, which stretches out across a valley mostly filled with juniper trees and then up into the steep opposite slope.

Wild Basin forms a part of the Balcones Canyonlands Preserve. Significant portions of that entity remain closed to the public, so Wild Basin acts as a gateway to the larger preserve by hosting public events. The Austin Astronomical Society, for instance, holds periodic star parties here. During the daytime, on the second Saturday of each month, Wild Basin’s volunteer trail guides lead groups on two-hour, information-packed hikes. Using binoculars, springtime visitors may even catch a glimpse of the endangered golden-cheeked warbler, and rarely, the black-capped vireo.

If you’d prefer to hike on your own, the Creative Research Center provides a printed map that you can also download on a smartphone. A display inside the visitor center features a large, three-dimensional contour map of Wild Basin. Press any of several buttons, and the corresponding trail lights up so you can plan your route through the preserve. The map’s contour lines let you gauge your time and energy, especially for the 200-plus feet of elevation gain coming back up from Bee Creek and the waterfall. Believe me, it’s well-worth the venture.