With a Butter Knife and a Ball-Peen Hammer 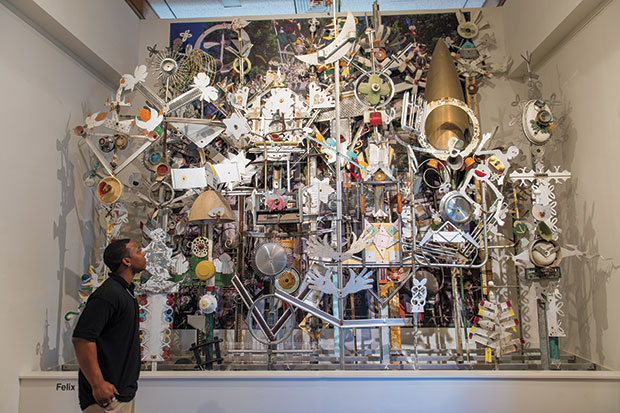 The neighborhood kids called Felix Harris “the Voodoo Man” because his front yard was full of eerie poles he brought to life using broken and discarded objects. He created more than 120 of the totems, from 5- to 18-feet tall. Sometimes the wind would make parts spin and hum, and the kids would run away screaming. Nobody on Ledet Road, especially not Harris, had any idea that these quirky creations would one day help give Beaumont a reputation as the folk art capital of Texas.

After Harris passed away at age 80 in 1985, his great-nephew Elray Wolfe donated the work to the Art Museum of Southeast Texas, which was in the process of moving from a private residence into a stately, new 24,000-square-foot building on five acres in downtown Beaumont’s historic district. This was before the mainstream had embraced “outsider art,” often created by self-taught expressionists, so you can imagine how Harris’ giant swizzle sticks went over in Beaumont at first.

After the museum installed 67 of Harris’ totems outdoors in the fall of ’87—adorned with items like scrap metal, old toys, and street markers—an “art or eyesore?” controversy erupted. Critics would drive by honking their horns and yelling, “get rid of that junk!” to museum staffers. Some museum supporters even cancelled their memberships in protest. This was not the kind of art they had in mind for Beaumont’s Main Street when they supported building the new museum.

But in the cutting-edge art world, the Art Museum of Southeast Texas was recognized for its boldness and vision. Thanks to donations from artists and collectors, the museum’s contemporary folk art collection has grown to 300 objects, many of which are part of the current exhibition tête-à-tête: Folk Art and Fine Art from the Permanent Collection, which runs through September 4. Joining Harris’ works in the galleries are those of other unconventional artists such as Carl Nash, Son Ford Thomas, Burgess Delaney, and Harold Jennings. 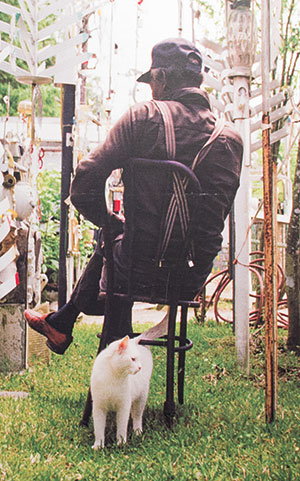 “The work of Felix ‘Fox’ Harris was the genesis of our folk-art collection,” says Lynn Castle, executive director of the museum. “He helped us define who we are.”

Admission is always free at the museum, which displays a rotating mix of fine art and folk art from the 19th Century to the present, mostly from Texas and the region. The museum’s sole permanent exhibit—Somethin’ Out of Nothin’: The Works of Felix “Fox” Harris—features 26 sculptures, plus revealing photographs of Harris at work by local artist Keith Carter. But the most moving display is a case containing the tools that Harris used to make all of his dramatic and whimsical art: a ball-peen hammer and a butter knife with a sharpened tip. That’s it!

Though he knew of equipment that would make his work easier, Harris chose to use primitive tools. For a flower made from metal, for instance, he would painstakingly tap his knife with the hammer until the piece was cut out. Harris never considered himself an artist, just someone who liked to make something out of nothing—as he had done with his life.

Born in Trinity in 1905, Harris, an African American, earned the nickname “Fox” as a child for his crafty elusiveness. As he got older, he worked as a hard laborer in lumber and railroad camps and drank a lot. But that was his old life. When he was about 55 years old, Harris said, God came to him and offered him a fresh start, one where self-expression would take the place of self-destruction. He handed Harris a blank sheet of white paper and then disappeared. Harris tells the story, overcome with emotion, in an audio interview that visitors can listen to in the exhibit.

Harris went to work on his totems and didn’t stop for almost 25 years. He favored certain motifs that underscored his mindset, like hands and running horses. Just as he had once been broken and made new again, his work resonated with rebirth. What some may regard as junk can be made beautiful with the right amount of skill and empathy.

A challenge for the Art Museum of Southeast Texas, however, has been to keep the Harris collection, made from castoff materials, from deteriorating in the elements over the years. Hurricane warnings led the museum to temporarily remove its outdoor Harris pieces on three occasions. The museum’s onsite storage couldn’t accommodate the number and size of the collection, with some pieces weighing as much as 500 pounds, so many of the totems had to be stored offsite. 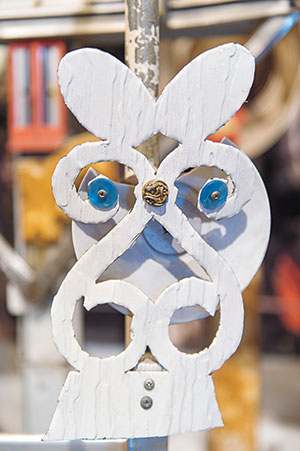 For about 10 years, until the late 1990s, the museum’s Boyt Courtyard held 67 totems, but the southeast Texas heat and rain eventually damaged the work. The museum received a conservation grant in 1996 and restored as many of the pieces as possible. Twenty-six found a new home inside the climate-controlled museum.

The museum sold the remaining objects in a June 2002 auction, with the proceeds placed in the museum’s acquisition fund. The gift of Felix “Fox” Harris keeps on giving.

Beaumont art collectors Keith and Patricia Carter were early supporters of Harris. In a book the museum published in 2008 featuring Keith’s photos of Harris and his artwork, Patricia described the collection of totems as a “fantastic forest, alive with color and movement, and infused with vision and spirit.” Titled Felix Fox Harris, the book sells for $20 in the museum gift shop.

Harris was illiterate, but he exuded wisdom in his approach to his work. Though his totems look like spontaneous creations, Harris carefully plotted and designed each piece before assembling it.

At his home in north Beaumont, Harris built a tree house high above his art, he told the Carters, so he could see it as God did. And if Harris is still able to look down, he’s got to be awfully proud of what he’s inspired.