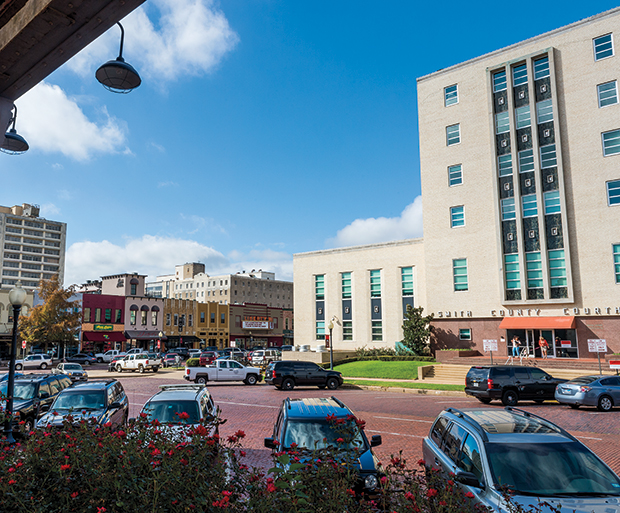 The architectural styles found along Texas main streets stack together like a timeline of the state’s historical development and shifting tastes. In four towns in particular—San Elizario, Tyler, Waco, and Dallas—building shapes and facades illustrate specific chapters of Texas history, from the early 1800s to the present. From squat adobe structures to towering glass skyscrapers, the buildings on these central thoroughfares resonate with distinctive aesthetics of time and place.

“The buildings of main street tell us who we were and what we will be,” says Stephen Fox, an architectural historian at Rice University. “San Elizario, with its plaza-centered Mexican urbanism, contrasts with the predominant type of Anglo-American main street, punctuated by a public square containing the county courthouse, as in Tyler and Waco. In Dallas, they built their square over the freeway.” 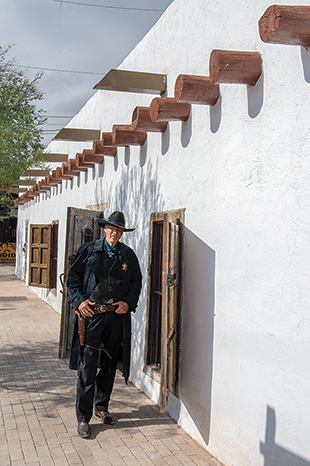 One of Texas’ earliest main streets is in the border town of San Elizario, on the outskirts of El Paso. Here, numerous white adobe structures gleam against the desert landscape and wide-open skies. These constructions, which feature thick, mud-brick walls and exposed wooden rafters known as vigas, are prime examples of the Territorial architectural style dating to when Texas was part of New Spain and Mexico.

In 1789, the Spanish built a presidio here, enclosed within a massive wall. In the subsequent century, local builders reused the wall’s adobe bricks in new buildings. Many of the older edifices in the historical downtown district contain these appropriated bricks, and a few of those on Main Street may incorporate sections of the original wall. One of these, the L-shaped Mercantile Building (built about 1830), now harbors a cluster of artists’ studios and the Veterans Memorial Museum. Another, which currently serves as the Old El Paso County Jail Museum, once held up to six prisoners at a time in its two wrought-iron cells.

On the adjacent San Elizario Road stands Los Portales (Spanish for “the portals”), named for its long, columned gallery. The building’s exact age is uncertain, but it served as a family residence in the mid-1800s and later as El Paso County’s first public school. Today, it houses Los Portales Visitor and Information Center, with exhibits relating to local history and Spanish contributions to the New World. Across the street, you can see the graceful curves of the presidio chapel, constructed between 1877 and 1882 in the Spanish Colonial Revival style. Its espadaña, or bell gable, was added in the early 20th Century in the California Mission style.

In East Texas, Tyler features several structures built in the Art Deco style along Broadway Avenue and nearby streets. This forward-looking aesthetic, characterized by decorative motifs of angular geometric shapes and streamlined forms, first became popular in the 1920s and was flourishing by 1930, when the East Texas oil field was discovered. In that decade, Tyler boomed as a hub of the petroleum industry.

Art Deco design is evident in the 15-story People’s Petroleum Building, which rises in three setback tiers and retains its original black granite entrance and expansive lobby with period details. Developers built what was then known as People’s National Bank Building in 1932 to meet the oil industry’s demand for office space. Located a block west of South Broadway, the building was renovated in 2012.

The six-story Blackstone Building followed in 1938, its brick facade ornamented with fluted limestone spandrels that draw the eye upward. Located on North Broadway, it was also designed as an office building and today houses the Tyler Chamber of Commerce.

Another addition of the 1930s was the Liberty Theatre (now Liberty Hall), on East Erwin Street near its intersection with South Broadway. This venue entertained audiences for about 50 years before shuttering. Restored to its Art Deco roots and reopened in 2011, it continues to draw audiences with classic films and performing arts events touted on its vintage neon marquee.

The single-story Sedberry Furniture building, with its simple lines and eye-catching, red-and-turquoise corner pylon, got its start as an H-E-B grocery store in the early 1950s, when Waco’s population was thriving due partly to a robust manufacturing industry. In 1953, one of the deadliest tornados in Texas history barreled through downtown. In its wake, some of the salvageable buildings were given mid-century facelifts. Some damaged buildings were razed and replaced with new constructions that embraced the aesthetics of the age. Erected in 1962 directly across from the Sedberry building, the Waco-McLennan County Library was built as a modernist flat-roofed pavilion clad with spandrel panels of pink marble. A 2013 remodel retained the library’s modernist characteristics.

One of the few structures to survive the 1953 tornado was the 1911 ALICO Building, which at 22 stories was the tallest building in Texas when it was built. In 1966, thanks to an urban-renewal effort aimed at stemming suburban migration, renovators added a cast-concrete facade with a design of faceted diagonals at street level, giving the original architecture a modernist twist. 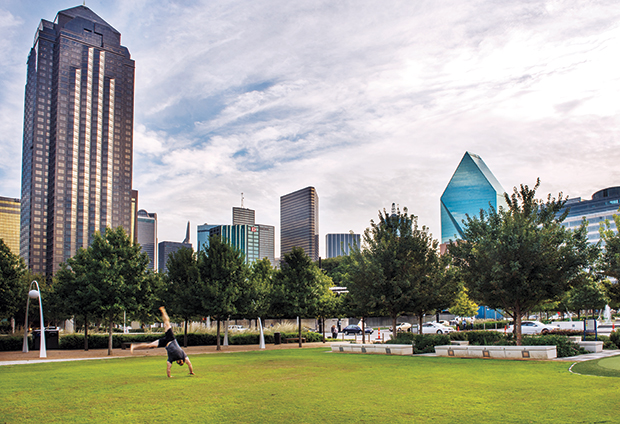 Flanking the park on one side is the Dallas Museum of Art, Nasher Sculpture Center, and Museum Tower, a 42-story residential tower completed in 2013 that resembles a column of reflective glass. A short distance north, the AT&T Performing Arts Center, which opened in 2009, beckons audiences with two different venues: the 2,200-seat Winspear Opera House, with its distinctive seven-story, red-glass oval protrusion and surrounding louvered metal portico, and the adjacent Wyly Theatre, a boxy, 12-story playhouse with a shiny exterior of vertical aluminum rods.

On the other side of the freeway, south of the park, stands the Perot Museum of Nature and Science, completed in 2012. This 180,000-square-foot building has a cube-like form sheathed in cast-concrete panels; a glass-encased escalator on the building’s surface pierces the building diagonally. The base of the museum merges into an undulating structure topped by an eco-friendly “green roof” of drought-resistant native flora.

Overall, the concentration of cultural venues and cutting-edge architecture around this section of freeway reflects Dallas’ dedication to urban engagement. While other main streets provide a trip back in time, this Dallas Arts District artery offers a glimpse into the future.