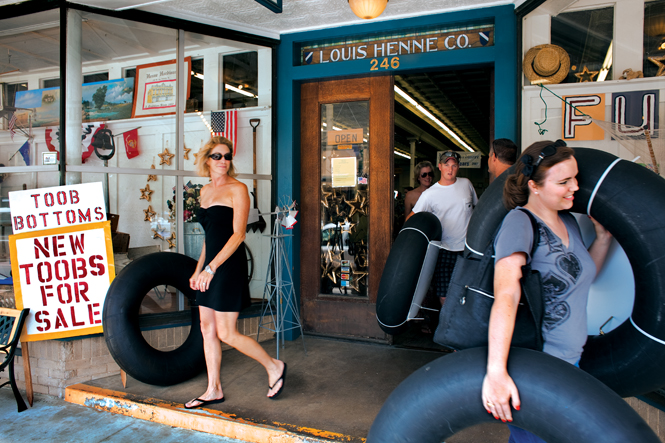 The clear, green Comal River rushes from the ground, flows two-and-a-half miles, and empties into the Guadalupe River, without ever leaving the city limits of New Braunfels. While many people consider the town synonymous with water recreation, the bustling burg also offers a variety of high-and-dry attractions that make it hard to beat as a weekend getaway.

On a recent visit, my husband, Corey, and I, along with our daughters, Holley and Bridget, stayed at Prince Solms Inn, a comfortable bed-and-breakfast named for New Braunfels’ founder, German Prince Carl of Solms-Braunfels (more on him later). Upon arrival, we freshened up in our rooms and then relaxed for a few minutes in the cozy parlor, which left us ready for our first order of business—dinner.

A short walk from the inn, Myron’s Prime Steakhouse occupies the former Palace Movie Theater, where a soaring ceiling testifies to the restaurant’s history. White tablecloths and plush, upholstered booths separated by fluted German glass complement an impressive wine list and a selection of fine steaks and seafood. We opted for steaks, which left us more than satisfied. Still, I couldn’t resist a slice of the restaurant’s signature chocolate cake  topped with a locally made Jack Daniels-infused vanilla ice cream—a heavenly combination.

Saturday morning kicked off with a leisurely breakfast on the Prince Solms patio. The inn includes nine rooms in the main building, and three in an historic feed store. The latter rooms open directly onto the patio and feature rustic, country decor, including pine floors, Mexican-made wooden furniture, and
Western saddles and tack. The 1852 Klein Haus, a self-contained guest cottage, includes a front porch and enclosed back patio.

Fueled on scrambled eggs, sausage, and fluffy biscuits, we walked a few blocks to Henne Hardware, which dates to 1857. Strolling among the rolling ladders and antique display cases, with wood floors squeaking beneath my feet, I felt a strange urge to buy lantern oil or a pound of nails. A sign out front proclaiming a sale on “toobs” (Hill Country-speak for the inner tubes used to float the region’s rivers) pulled me back to the present.

Down the block from the hardware store, the former International & Great Northern, Missouri Pacific and Union Pacific Depot houses the New Braunfels Railroad Museum. Restored in 1986 by the local Historic Modelers and Railroad Society, the depot displays lanterns, baggage carts, timetables, and photos of the golden age of railroading, many of them related to this area, as well as two operating model trains. A restored 1942 locomotive and 1950 caboose also occupy the grounds. They’ll soon be joined by two other railcars: a 60-foot boxcar, which will house additional exhibits, and a 1922 Pullman lounge-turned-dining car, which will be rented out for special occasions.

Three blocks south of the Railroad Museum, on a hill overlooking New Braunfels, we found The Sophienburg Museum & Archives. Prince Carl named the site Sophienburg (Sophie’s castle) in 1845, intending to build a grand home here for his fiancee, Lady Sophia, Princess of Salm-Salm. Legend says that once Sophie found out how primitive the conditions were in Texas, she refused to leave Germany and Prince Carl soon returned to her. However, the museum’s director, Linda Dietert, says the romantic story doesn’t take into account that Prince Carl was relieved of his duties as general commissioner of
the Adelsverein (a society of German noblemen that promoted emigration to Texas) before his departure. At any rate, he later married Sophie and never returned to Texas.

Upon entering the museum, visitors walk through a room designed to replicate the steerage area of a ship that brought German settlers to Texas in 1844. The tour includes an astonishing number of original artifacts, such as trunks, tools, dishes, and even some of Prince Carl’s personal belongings-among them his sword and a walnut writing desk. The gift shop remains in a perpetual state of Christmas, with more ornaments than Grandma’s attic, including hand-painted glass from Germany. A new exhibit inspired by the scrapbook of a local traveler, European Travel in the 1930s, starts this month and runs through August.

Between the two museums, a 1920s building now houses the Huisache Grill. Billed as “the contemporary version of a 1940s road house,” the restaurant serves everything from fried oysters and chicken-tortilla soup to portobello mushroom sandwiches and sirloin steaks. Everything on the extensive menu
sounded delicious, so we had a hard time deciding what to order. We settled on a salad sampler, hot-and-crunchy trout, and blackened salmon, with Mexican-chocolate mousse for dessert. The restaurant’s wine list features selections from around the world—including some from Germany, of course. I attribute the hefty wine lists and beyond-ordinary beer selections at many area establishments to New Braunfels’ German heritage.

Next, we drove a few miles west on Texas 46 to visit Dry Comal Creek Winery, which grows Black Spanish grapes and butterfly-attracting flowers on five acres of vineyards and gardens. For an $8 tasting, the winery pours nine wines, from dry whites to demi-sweets and dry reds. A $13 tasting adds four reserve wines, and for another $2, we braved a Shootin’ Blanc, or a dash of Sauvignon Blanc with a jalapeño in a frozen shot glass. Only in Texas.

With 16-year-old Bridget now serving as designated driver, we headed a bit farther out on Texas 46 to FM 3009 and the Natural Bridge Wildlife Ranch. Here, visitors may drive the four-mile loop as many times as they like for a close look at some 40 species of native and exotic animals, including gemsbok antelope, elk, wildebeests, and zebras. The free bag of animal feed that comes with admission equals instant popularity with most of these residents—but if you can, visit early in the day when the animals are still hungry.

In the 1870s, H.D. Gruene, son of early settlers in the area, Ernst and Antoinette Gruene, opened a mercantile store, cotton gin, and a gathering place, Gruene Hall, on the banks of the Guadalupe River just northeast of New Braunfels. Pat Molak bought the hall in 1975, and later, with friend Mary Jane Nalley, added a collection of area buildings and what remained of Gruene’s cotton gin. That became The Gristmill River Restaurant, a grouping of 10 distinctive dining areas, including the one where we landed that evening, the River Room. This impressive maze of decks hanging off the hillside at treetop level above the river no doubt keeps the wait staff in great shape. Enjoying an onion-ring appetizer and a glass of cold sangria, with music drifting from the patio out front and a breeze rising from the flowing water, I couldn’t have been happier.

Now listed in the National Register of Historic Places, Gruene lures nearly a million visitors from around the world to dine, shop, and catch live music at Gruene Hall. There, people pack the wide room, linger around a couple of pool tables, and relax at picnic tables or play horseshoes outside. We enjoyed first-rate people-watching and great music, but on our visit, only a handful of people danced, perhaps because it was so crowded.

On Sunday morning, we stopped just around the corner from the inn at Naegelin’s Bakery for cinnamon rolls that stretched six inches across. We took these to nearby Landa Park, whose 51 acres along the Comal just north of downtown include an arboretum and spring-fed pool. Adjacent city parks feature a nature trail and a tube chute. The pool and tube chute open only in the summer, but brave souls with their own “toobs” can float the river anytime. Find public access at Hinman Island, between the Landa Park Golf Course and the river. A few tube-rental outfitters open year round, and some offer wetsuits. Downstream from the park, Landa Falls rents tubes and provides river access and shuttle service during the summer. This starting location offers the longest float on the Comal, and a relatively tame and family-friendly one.

After our picnic, we drove east of town on Loop 337 to Conservation Plaza, a three-and-one-half-acre site that includes a 19th-Century log cabin, general  store, saloon, music studio, furniture shop, ranch home, and school, arranged like a German village. Our guide that day, the president of the New  Braunfels Conservation Society, Barron Schlameus, pointed out the Baetge House, which was built in 1852 by Carl Friedrich Baetge, a German civil engineer who constructed railroads for a Russian czar, married a member of the Russian royalty, and moved her to the Texas Hill Country. Schlameus helped rescue and move the house in 1975 from its original location 26 miles northwest of town. The structure retains a wood-plank floor, original doors, and handmade period furniture.

We ran out of time for many other New Braunfels attractions: Antiques shops. German food. The Museum of Texas Handmade Furniture and the Fire Museum. Schlitterbahn Waterpark. Texas Ski Ranch. Tubing on the Guadalupe. If Prince Carl showed up today, there’s no way he’d ever leave, Sophie or no Sophie.

For information on lodging, restaurants, events, and other attractions, call the Greater New Braunfels Chamber of Commerce at 800/572-2626; nbjumpin.com. Contact information for the sites in the story follows.