I spent a weekend with one of my best friends, Jana, at the Hotel Galvez in room 507, if I recall correctly. It was a couple doors down from the famous room where a woman had hung herself so many years ago.

Laying there, awake in bed, I watched the face of an older gentleman in the upper corner of the room. He was in period clothing. I wasn’t sure what I was really seeing. Was my mind playing games?  Was I really asleep already and just didn’t realize it? No. I was a awake. I made sure.

The next thing I know, I’m pinned to my bed. Unable to move, breathe, scream or even mutter a sound. What looked like a sea haggard witch (how I got that description? I have no idea. It just fit) was on top of me, straddling my body with her hands on both sides of my rib cage. Her hands were vibrating so fast and she was shaking me with a fury in her face. I could feel what was like electricity in my body from her hands. 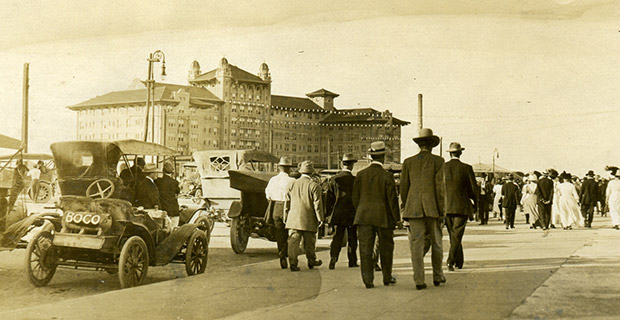 I was finally able to mutter a tiny whimper of a sound, and my friend in the bed next to me calls my name. The witch disappeared into thin air just as fast at she had appeared.

I shared my experience with my friend, who believed me as she’s open to stuff like that. I’m not!

The next day my friend is talking to anyone in the floor that will even be honest enough to share their story about wha they experienced.

I only told Jana what the which looked like.

Later we had a spa day and while Jana was talking to everyone about what each person experienced, she finally tells my story.  The whole time I’m getting a pedicure, the girl that was working on my feet never even looked at me, much less speak more than 2 words that I could even recall.

When Jana shared my experience, the young lady described what I saw.  NO ONE was told what I had seen!  I was completely embarrassed to look like a crazy person.  I tried googling anything about what I saw and no where is it online that I could find.