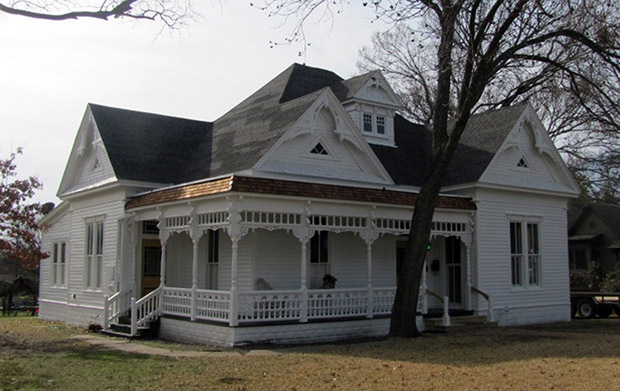 This is true, you can draw your own conclusions! Yesterday we think we saw a ghost.

When I went on the historic home tour in Waxahachie with my best friend, Janie and my granddaughter, Hannah, we noticed an old man wearing a bright blue vintage blue suit. He had big bushy hair and he looked like a crazy professor. As he got on the bus we thought he was part of the people dressed up in old clothing for the tour but he wasn’t.

It was about 2 p.m. and very hot and humid as we waited for the bus with him. We stood in the heat for a long time waiting for the next bus. We were fanning ourselves and drinking from a water cooler the tour provided.

The old man was like a zombie. He was always looking around, turning his head in all directions very fast and was emotionless. He didn’t have a drop of sweat on his face and never drank any water. We asked him if he had been to all the houses on the tour, and it took him a long time to answer. He appeared to not want to interact with us or anyone and would constantly look around and pace and stand back from people. He would walk very fast and jump on the bus quicker than anyone.

He stood still for a minute and spoke to us. He said he loves the historic home tours and has gone on all the tours since 1970 except for one. We asked if he lives in Waxahachie. He said he lives in Arlington. His face and his skin looked a weird, translucent grey color and the reddish color on his cheeks appeared to have been painted on a long time ago. He looked like a person who had died and had makeup on him like they do in the morgue. There was a lot of brownish, yellow looking stuff under one of his eyes. His shoes looked like temporary shoes. Janie and Hannah said they couldn’t believe he was able to walk in such thin looking shoes.

After the tour, we started heading back home and saw the old man in the bright blue suit walking down Main Street/ We wondered where he was going. There were no houses to tour in that direction and there were no cars parked on that side of the street. After we passed him I pulled up in a driveway and suggested we ask him if he wants a ride.

As I was turning the car around, my friend and my granddaughter kept watching him. He had started walking across the yard of an old house and stopped in the yard. He quickly looked all around then disappeared.

We drove up in the driveway and you could see through the windows that the house was vacant. My granddaughter and I walked up on the porch of the very old house and looked in the windows. The man was no where in sight and the house was empty.

We drove all around the area to make sure we didn’t imagine it, but he was nowhere to be found.

Could this be the old house he used to live in? And when he said he lives in Arlington, could he mean that he now resides in Arlington Memorial Cemetery?

This is true, you can draw your own conclusions.

My friend and I went on an old historic home tour in Waxahachie. We were in one of the old houses that had a room filled with old toys. As we walked in, I laughed and said that at night when everyone is asleep the toys come to life. Suddenly, just as the words left my mouth, out of nowhere a big doll that was propped up in a corner fell on the ground hard, really hard. It was fairly far from where it had been propped up on display. It seemed as if it raised up and then fell.

We both have vivid imaginations so some of the old houses seemed very scary to us.

We decided to be adventurous and eat in an old restaurant famous for being haunted, called the Catfish Plantation. The restaurant was packed so we had to sit on a wooden bench inside the restaurant and wait. We picked up a notebook with different stories and ghostly sightings written by customers who had seen and experienced things in the restaurant. The more stories we read the more we watched for ghosts.

A lady came in and sat down next to me on the old wooden bench . As she sat down she let out a squeaky toot. It was fairly loud. I was sitting between Janie and the squeaky toot lady.

Janie’s eyes bugged out as she turned to me and said quietly in a scary tone of voice “did you hear that?” I tried to keep from laughing as I replied in my scariest voice “yes I did.”