Written by Art Williams, Photographs by Dave Shafer | From the January 2019 issue | Updated: February 20, 2019 | Filed Under: Where to Stay 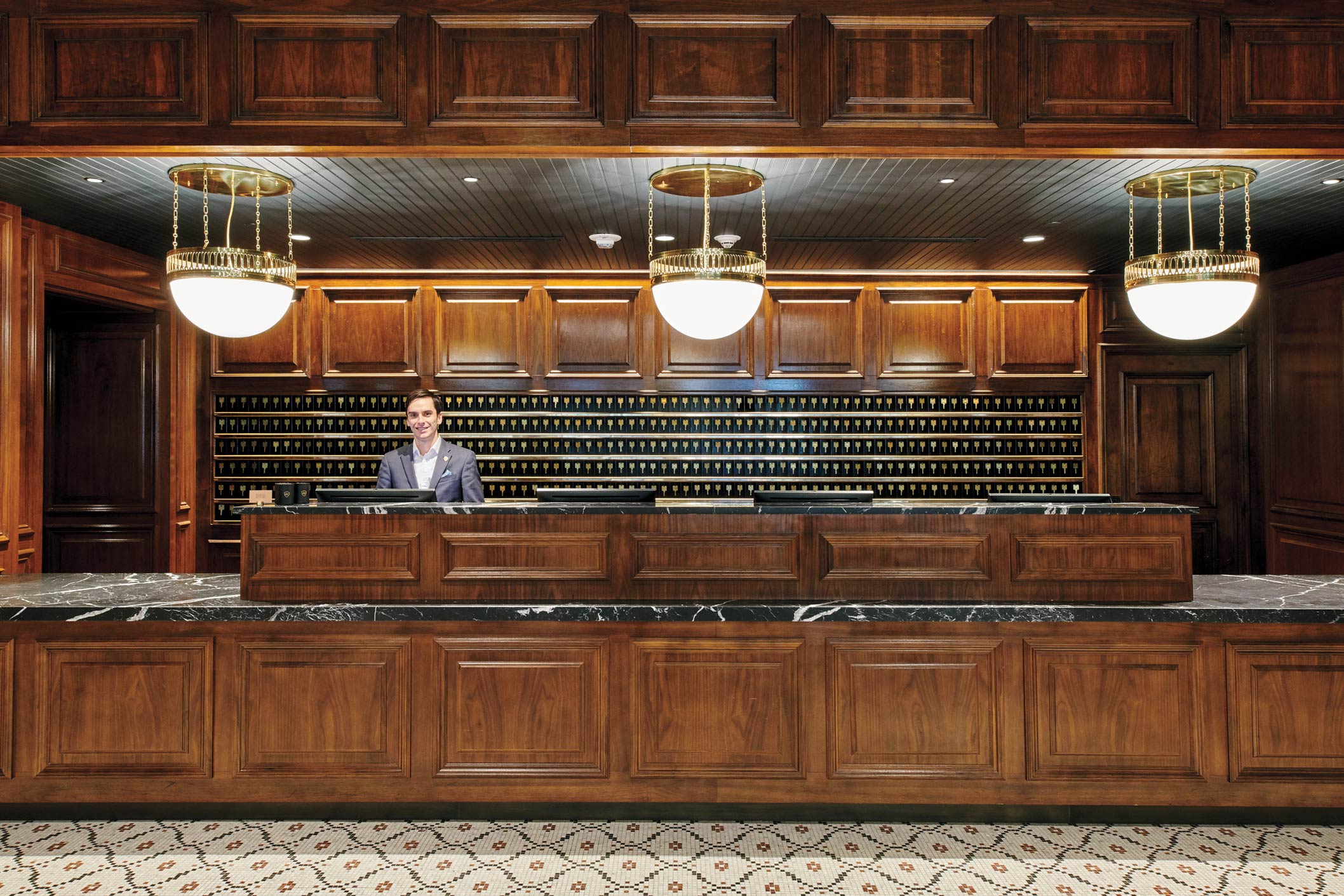 Stories of Dallas’ glamorous past unfold at three classic hotels where recent, significant updates make them as relevant as some of their much younger and flashier counterparts. To spend time exploring The Adolphus, The Stoneleigh, and The Statler is to appreciate the ways old becomes new again and to understand how these vintage jewels first shaped the Big D into an enjoyable place to visit.

Modern rooms at the Adolphus Hotel start at $189. Embrace the midcentury at The Statler from $183, or bask in The Stoneleigh’s natural light from $169.

“King of Beers” Adolphus Busch would surely be as proud today as he was when he built his palatial Texas hotel in 1912. A renovation completed in October of the 407-room downtown landmark honors Busch and his beer, Budweiser, in numerous ways.

A giant chandelier Busch purchased at the World’s Fair in Chicago in 1904—and which resembles a crown festooned with the same kinds of eagles and hops that appear on the iconic Budweiser label—hangs over the escalator that leads from the lobby to a massive parlor called the Social Lobby. A majestic portrait of Busch is displayed near the elevators, which still exhibit gold leaf detail original to the hotel’s debut.

New, contemporary elements work within the hotel’s grandeur: The 1915-era Brass Tacks barbershop, which had been abandoned for decades, thrives again near the hotel entrance; and Commerce Goods + Supplies, a boutique just off the lobby, stocks locally made fragrances, leather creations, and hats by Stetson, one of which is unique to the Adolphus—a style called The Renard. One of the largest spas downtown now sits next to a new rooftop pool, where guests sip cocktails by the fire.

City Hall, the more casual of the hotel’s restaurants, serves a menu of bright, exotic dishes hinting of Mediterranean influences. The renovated French Room, a vaunted Dallas institution for high-end dining, shows off 17th-century-style chandeliers crafted from hand-blown Murano glass. In the bar and salon just outside the restaurant, a collection of more than 40 original works by Texas artists adorns the walls. 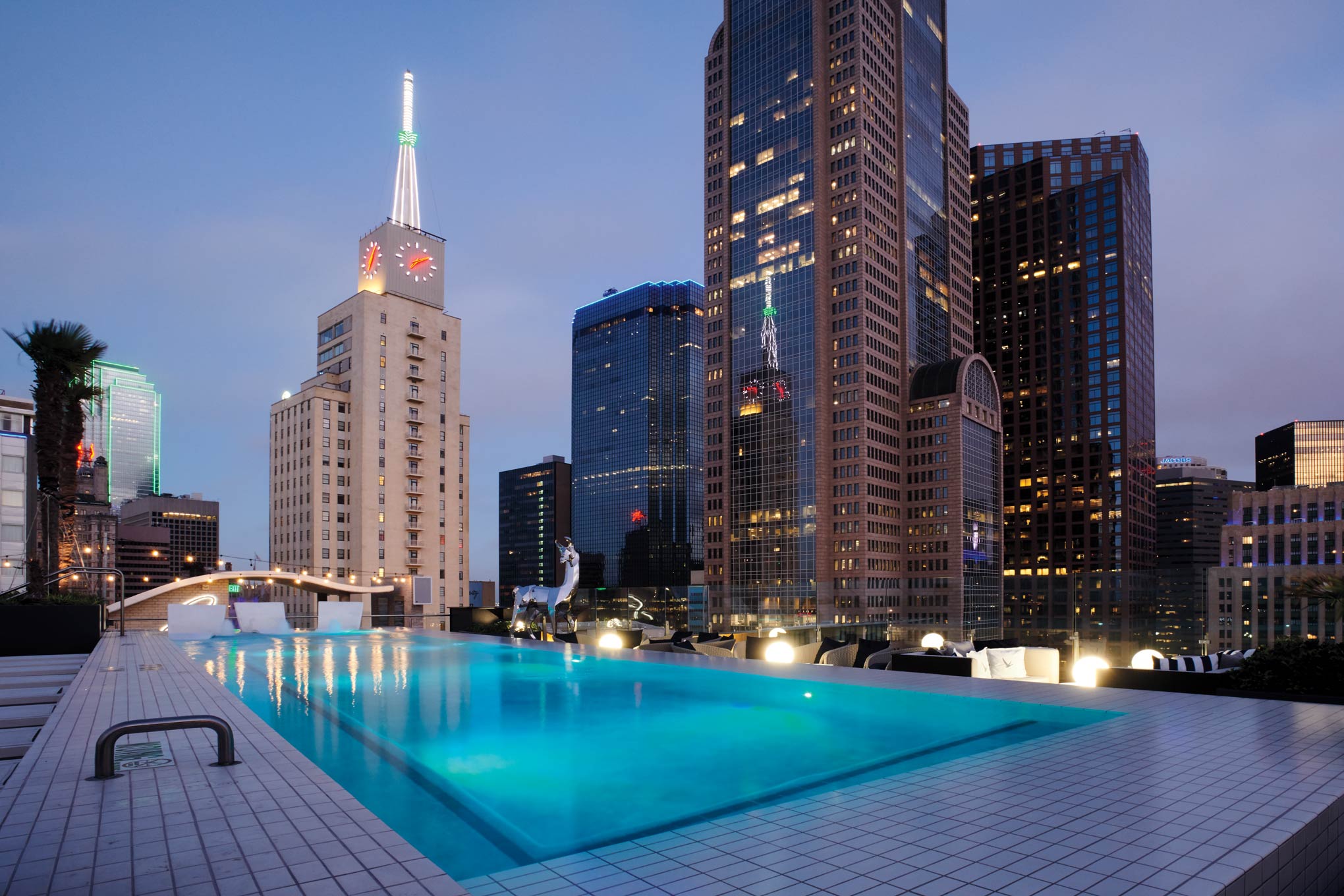 The rooftop swimming pool at The Statler.

A few blocks from the Adolphus, The Statler was an edgy, $16 million masterpiece when it opened in 1956; famous guests included Frank Sinatra and Elvis Presley. Shuttered in 2000, it fell into decay and barely escaped the wrecking ball. A lengthy $255 million redevelopment created the showplace anew, welcoming guests to 159 rooms in fall 2017. Vintage elements include the classic midcentury’s pioneering, cantilevered design; a large, stainless steel-and-gold-plated rotating sculpture by José de Rivera called A Wishing Star that rises from a patio overlooking St. Paul Street; and a striking, colorful 40-foot-long mural by artist Jack Lubin in the lobby. Throughout common spaces, from the lobby to hallways on guest floors, terrazzo flooring and mod light fixtures transport guests to the best of the 1950s.

Guests are transported to the 1950s at The Statler, where Frank Sinatra and Elvis Presley stayed during visits to Dallas.

To one side of the lobby, the elegant Fine China serves a communal-style menu of reinvented American-Chinese cuisine, including dim sum, rice and noodle dishes, as well as high tea service. At the more casual and campy Scout, meals come with sides of bowling, pingpong, pool, foosball, and live music. Also off the lobby, Overeasy’s all-day breakfast includes buttermilk biscuits with shaved honey ham, brisket hash topped with eggs and crispy okra, or a five-way deviled egg flight. Imbibers enjoy Bourbon & Banter, a basement bar with speakeasy tones and smooth-talking bartenders whipping up craft cocktails in a space that once held the hotel’s barber shop; and the rooftop Waterproof, serving cocktails beside a long swimming pool that glows electric blue under a starry sky 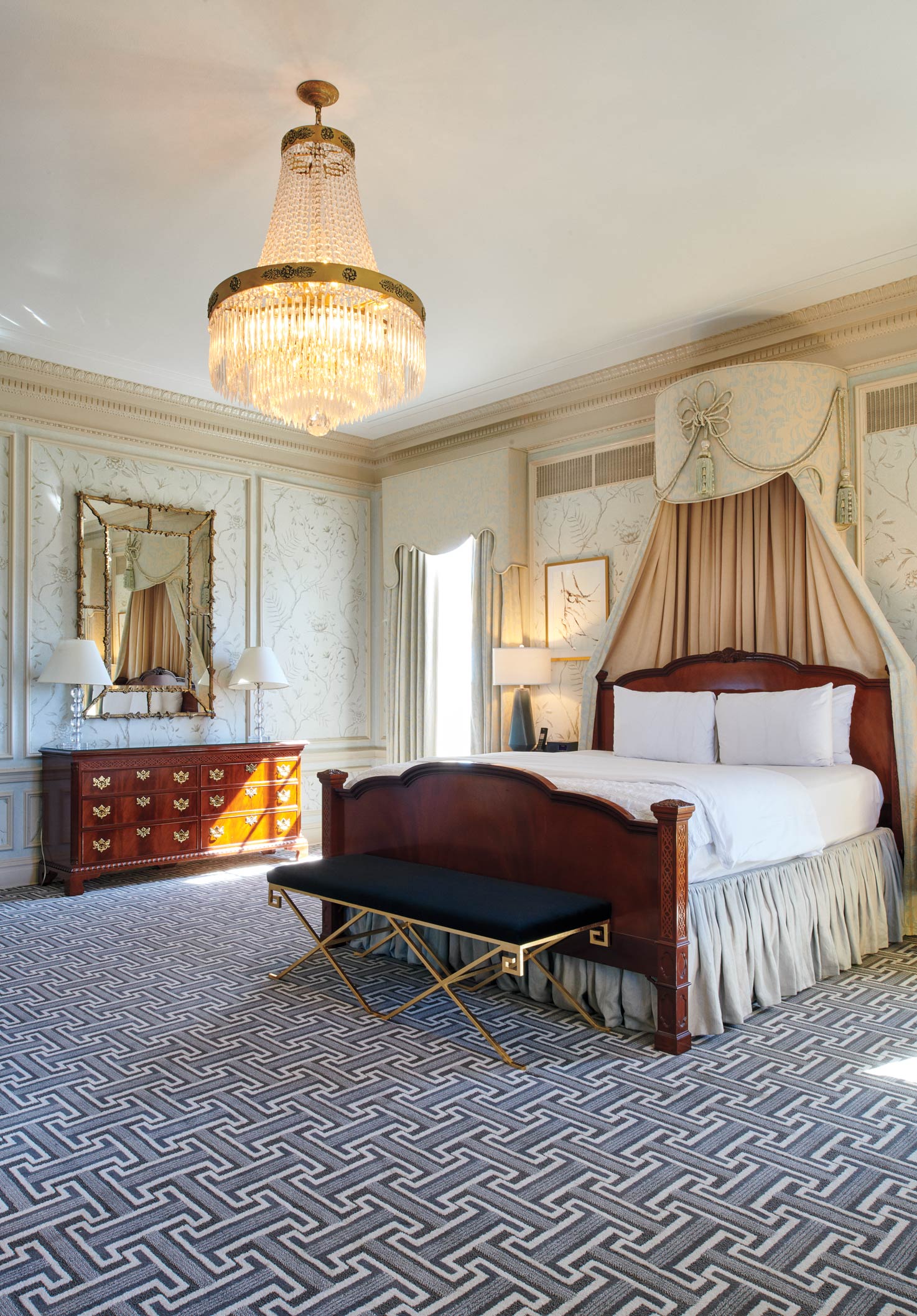 A room at The Stoneleigh.

Known as The Stoneleigh Court Hotel at its 1923 opening, the handsome lodging in the neighborhood now called Uptown boasts 176 guest rooms and newfound confidence after a 2018 face-lift. Its darkish, dowdy lobby became a bright, crisp setting that flows easily into an open, airy bar and terrace lounge overlooking beautiful Maple Avenue. Guests move from cocktails and charcuterie at the bar into the new Perle on Maple, which serves Niçoise salad and duck confit pancakes. Walls hung with framed vintage hotel and neighborhood photos and an art installation comprising pen-and-ink drawings atop books of classic literature satisfy visual appetites.

Up top, a former penthouse residence offers luxury guest suites and a library and salon frequently used today as a party or meeting venue; it’s well worth asking to see the finery, which has been restored to its original glory. Best of all, terrace views of downtown and one of the graceful Calatrava bridges spanning the Trinity River take one’s breath away. Those with no fear of heights can look straight down to the new outdoor swimming pool area, complete with chic, comfy cabanas—perfect for enjoying an al fresco flute of bubbles and toasting the smart hotel reboots in Big D.