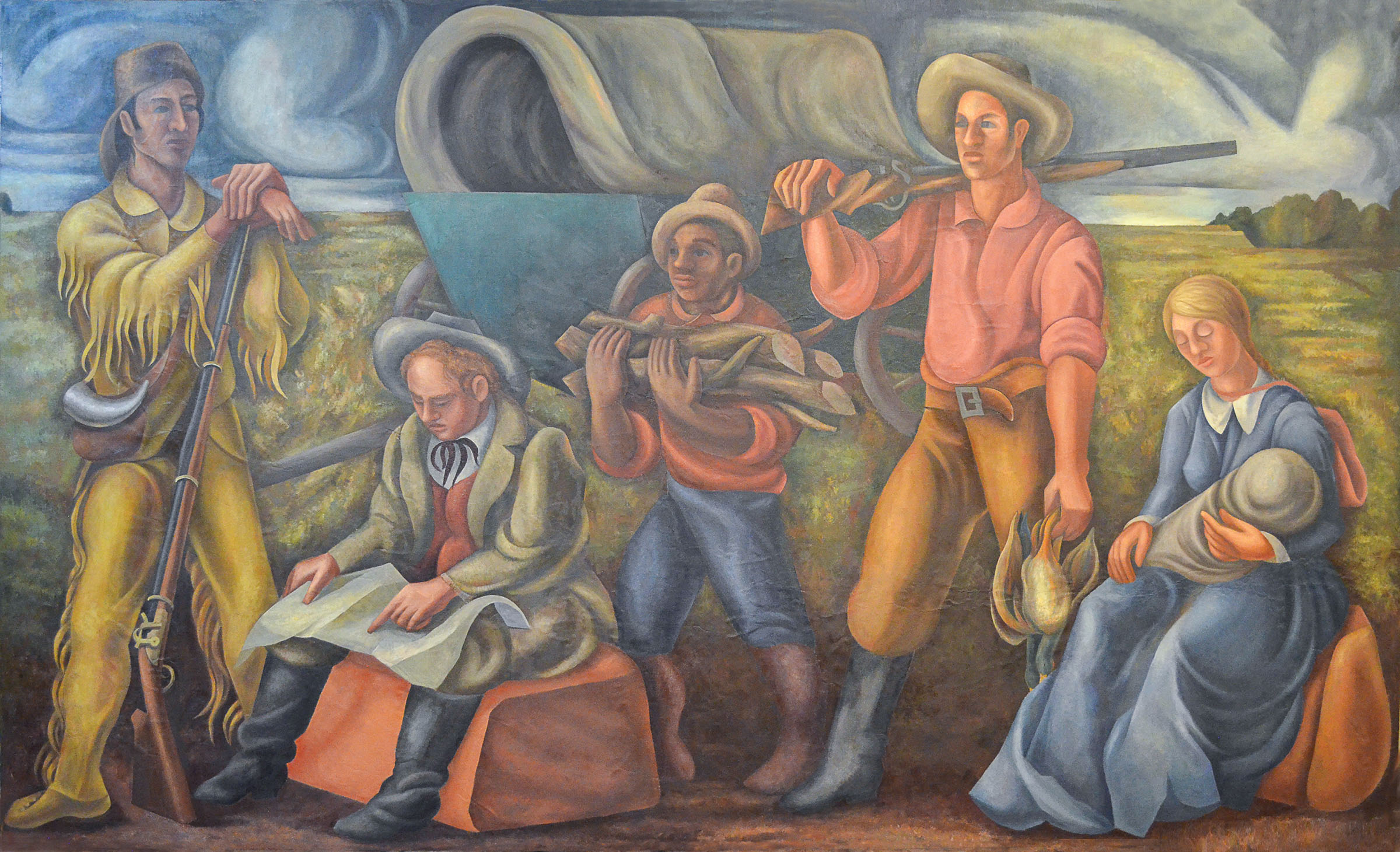 In the 1930s and ’40s, artists enlivened the walls of post offices across the United States with colorful murals depicting community life. These artworks, often mistaken for Works Progress Administration projects, were part of a separate New Deal initiative called the Section of Fine Arts. Unlike the WPA, the Section’s primary purpose wasn’t to put people to work. Rather, its mission was to create high-quality art and lift the spirits of people worn down by the Great Depression. Many of the roughly 1,400 murals nationwide portray resolute pioneers, productive labor, and proud moments in regional history.

“The Section wanted people in rural America to know that the federal government did not forget them,” says Philip Parisi, who wrote the 2004 book The Texas Post Office Murals: Art for the People. These murals were often the first artworks residents of rural areas had ever seen in person. Although people are less reliant on the postal service in the age of the internet, post offices still serve as landmarks and community spaces. More than half of Texas’ murals are still displayed in their original locations, quietly preserving an important era in American history.

Artists from across the country designed murals for Texas post offices, but three prominent native Texans contributed several murals each.

Jerry Bywaters
Bywaters, born in Paris, was a member of the Dallas Nine art collective, an art critic for the Dallas Morning News, and director of the Dallas Museum of Art. His murals include “The Naming of Quanah” (Quanah, 1938), “Soil Conservation in Collin County” (Farmersville, 1941), and “Lumber Manufacturing” (Trinity, 1942).

Tom Lea
Lea, born in El Paso, was an artist, a novelist, and a historian known for chronicling the Southwest and for his on-the-ground depictions of World War II. His murals include “Pass of the North” (El Paso, 1938), “Stampede” (Odessa, 1940), and “Comanches” (Seymour, 1942).

Julius Woeltz
Woeltz, born in San Antonio, was a landscape artist and professor at the University of Texas at Austin and Sul Ross State University, where he founded the Art Colony. His murals include “Texas Farm” (Elgin, 1940), “Disk Harrow” (Amarillo, 1941), and “Coronado’s Exploration Party in Palo Duro Canyon” (Amarillo, 1941, below).

Typical artist payment for a mural

AND THE AWARD GOES TO

Artists working for the Section of Fine Arts were chosen not on the basis of financial need, as with WPA projects, but instead through competitions. The largest was the 48 States Competition in 1939. More than 3,000 entries were judged, and the winners were placed in one post office in each state and included in the December 1939 issue of Life magazine. The winner in Texas was “After­­noon on a Texas Ranch” (mural study above), created by Ethel Edwards for the Lampasas post office.

The Texas Post Office Murals: Art for the People, by Philip Parisi, is a handy guide to murals across the state, featuring 115 photographs and a locator map. To research the book, Parisi visited the National Archives to read New Deal-era newspaper articles and letters exchanged among the artists, local postmasters, and program administrators. He describes how the artists chose their subjects and how each mural was received by its community.

The Section of Fine Arts chose artists based on their proposals, not where they lived. Many could not afford to visit the communities where their murals would be displayed, and even when they did, inaccuracies still cropped up.

Consider “Cowboy Dance” in Anson, depicting the Texas Cowboys’ Christmas Ball. Artist Jenne Magafan, who visited Anson for inspiration, was not informed the town was dry, and the liquor jug she painted at the feet of a musician caused a minor uproar.

Another example: “Big City News” (below) in Borger shows cowboys reading their mail on the porch of a wooden post office, their horses tied nearby. Artist Jose Aceves evidently didn’t know that all the buildings on the original main street were brick, or that by 1926, when Borger was founded, cowboys were more likely to drive Model Ts and Model As than to ride horses to town.