Cast Away: Fly-fishing the Guadalupe River 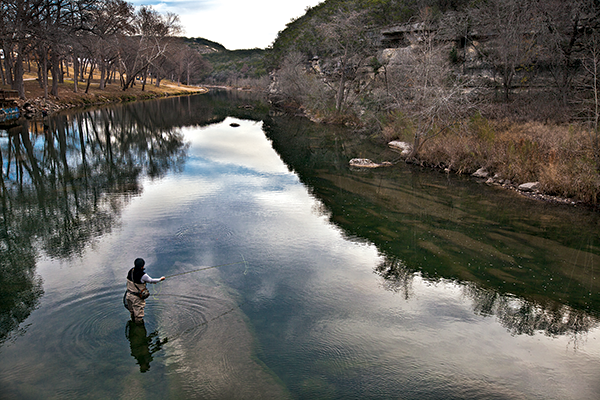 The river best known for its summertime activities also is the southenmost trout fishery in the United States. (Photos by J. Griffis Smith)

Seated on a large, flat rock along a tranquil section of the Guadalupe River, I hear the faint whoosh of my husband’s fly line as his cast cuts through the air. He’s fishing in front of me, hip-deep in the water. Behind me, two squirrels are chasing each other, rustling about in crinkly fallen leaves. I look up at a towering pecan tree next to me, relaxed by its occasional sway. This is the soothing soundtrack I look forward to every winter. I’m at Rio Guadalupe Resort in Sattler, reading a book at water’s edge, just steps away from my rented cottage for the week.

Located 16 miles north of New Braunfels, Sattler is an unincorporated, one-stoplight town near Canyon Lake; it was founded in 1845 by William Martin Sattler, who had left Germany to settle with his wife in Texas. Home to a popular dance hall, saloon, and bowling alley in the late 1800s, today Sattler is quiet, encompassing not much more than a grocery store, an Ace Hardware, and a few simple restaurants.

But during the winter months, the area becomes one of the Hill Country’s most popular fly-fishing destinations, as each year the Texas Parks & Wildlife Department stocks nearly 24,000 rainbow trout in the Guadalupe from December to early March. Trout Unlimited, a national nonprofit dedicated to conserving coldwater fisheries, also stocks trout. The river best known for its summertime activities is also the southernmost trout fishery in the United States, and this is why we’re here.

We make the four-hour drive to Sattler to fly-fish for trout at least twice a year, once after Christmas and once in February for Troutfest—a three-day fly-fishing expo and banquet hosted by the Guadalupe River chapter of Trout Unlimited. Troutfest draws hundreds for casting contests, lectures, demos, and a kid’s fishing pond. Back home in Fort Worth, when I mention this to fellow anglers, I’m met with surprise.

“Nobody believes you, do they?” asks Carolyn Sanders, one of the amiable Rio Guadalupe Resort staffers I’ve come to know over our dozen or so trips here. “I just got a call from a fly-fisherman in Colorado who said, ‘You mean it doesn’t get too hot?’ I told him the Guadalupe runs 58 to 62 degrees year round. He said, ‘You’ve got to be kidding me.’”

No kidding. Each winter, men and women clad in multi-pocketed vests and clunky wading boots embark on fly-fishing excursions in the cool, shallow waters of the Guad, as the locals refer to it. They fish in hopes of landing a hog, so to speak, as the trout here are known to be big. 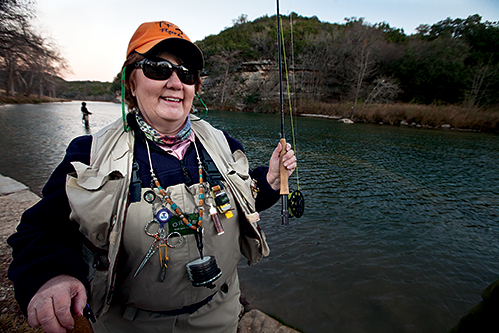 Each winter, men and women clad in multi-pocketed vests and clunky wading boots embark on fly-fishing excursions in the cool, shallow waters of the Guad, as the locals refer to it.

But so far on this trip, I haven’t hit the water. I’m in no hurry, either, unlike my husband, Josh, who had one foot in his waders before we parked our vehicle. This is why we love staying at Rio—the RV park and campground also offers 21 frills-free cottages about 50 yards from the water, so I can walk back and forth to our river-view deck as often as I please. Josh will fish for hours on end, strategically placing his carefully selected fly near underwater rocks and in deep pools as he slowly moves up and down a quarter-mile stretch of river. On the other hand, I might fish three or four times during the entire trip, because my agenda also includes reading with a glass of wine on the deck, practicing living-room Pilates, and cooking un-rushed meals for the family in the cabin’s kitchenette.

So for now, I’ve chosen to unpack our kitchen utensils and settle into our two-story, three-bedroom temporary home.
My parents and two family friends, Jason and Gwen, are joining us on this trip, and I’m planning a pasta marinara dinner topped with shrimp kabobs that I’ll cook on the grill in front of our deck.

“I’ve been fishing this river since I was eight years old and I always wanted to have a fly shop,” he once told me.

During one visit to ReelFly, my mom and Gwen, who don’t fly-fish, join me as the guys stay on the water. We want to see the hand-painted wooden crosses and bracelets made from leather belts created by a family member of Brent’s. I also want to pet Midge, a Basset hound-Labrador mix who serves as the official fly-shop dog. We take Brent’s girlfriend, Ashley, up on her offer of a complimentary pint of Trout Slayer wheat ale, which is brewed up in Montana—fly-fishing country.  She keeps a keg on tap next to the register. I take a sip and pick up a coral-colored Lilypond handbag as my souvenir from the trip. Made of recycled materials, with lots of hidden pockets, it’s perfect for travel and outdoors adventures.

Feeling the fishing itch coming on, I check out the bins full of colorful fly selections and choose a bright fuchsia worm—a San Juan worm, they call it—and pluck it from its compartment with tweezers. Gwen has picked out a trout-painted travel mug for Jason, and my mom has found a pair of polarized sunglasses for dad.

We thank Ashley for the beer and head next door to Bad Girlz of Texas, a funky boutique with costume jewelry, risqué greeting cards, trendy clothing, and always a great sale. After our laid-back shopping outing, the blinking “open” sign at The Real Pit Bar-B-Q catches our attention from across the street. We decide to pick up a few pounds of oak-smoked brisket from the outdoor walk-up counter, along with family-size cartons of potato salad and baked beans. The meal will make for an easy riverside picnic lunch. Waiting in line, a woman tells me she travels 30 miles for The Real Pit’s smoke-crusted brisket, partly because it’s so tasty and partly for the leisurely drive. 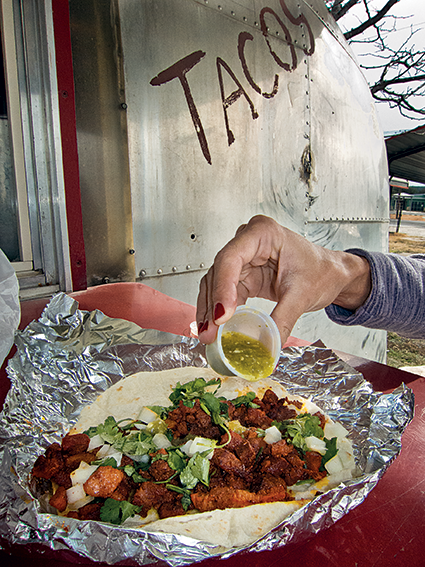 Within a few miles of the Rio Gradalupe Resort, an angler finds all the necesseities like bait, barbecue and breakfast tacos.

Sattler’s dining options are minimal, but deliciously satisfying. While we’ll cook most of our meals, tomorrow we’ll visit Sergio’s Tacos, a silver Airstream trailer that serves tasty tacos al pastor, carne asada, avocado-stuffed tortas—and on Saturdays, menudo. And before we leave, we’ll stop for peach bread pudding with peach brandy sauce at the Old Sattler Baking Company, a homey breakfast and lunch café that has been in business nearly two decades.

Mom and Gwen decide to walk off the barbecue with a stroll along the riverfront. There are some emerald ducks napping in the distance, so they head that direction. From our deck, I watch a family of five, including two giddy young girls and a boy, unroll a badminton net and set up for a game on the grassy lawn. A box of ladder-ball equipment lies on the ground next to their racquets and birdies.

Leaning on the wooden deck railing, I scan the jade-colored river and see Josh, Jason, and my dad standing knee-deep in the water, fishing quietly. Then Josh’s rod suddenly bends over into a U-shape as he holds his arm high. Fly-fishermen scattered about the water look his direction. Josh’s other hand holds his fishing net and, after a few minutes of both reeling in and letting line go, he squats slightly, scooping up what appears to be a nice-size rainbow trout.

Now is my time to make my way to the water. I like to fish between lunch and dinner, when the sun is at its warmest and starting to set over River Road’s fourth crossing bridge, located on the edge of Rio’s property. Cyclists and bikers zoom by as they begin a long, winding ride along the river, and cars often stop and idle here for a few moments, too, their drivers mesmerized by the fly-fishermen’s systematic casting below.

With my waders on and my rod in tow, I walk down the short hill to the river. The water is cold, and I’m thankful I put on two pairs of wool socks. Scooting my feet slowly to a flat spot, I begin casting toward deeper waters. I’m rusty at first, but gradually I gain momentum as my San Juan worm begins to land in the vicinity of where I’m aiming. Josh suggests I try a pale morning dun—a fly he tied last night that’s “been doing pretty good.”

We fish until the sun sets. And while he catches another two or three trout, I only end up with a bite for the day. But that’s okay. The peaceful pace of Sattler and this refreshing, wintertime version of the Guad is always restorative for me, fish or no fish.

Following are sites included in the story.

How and where to learn the basics of fly-fishing.