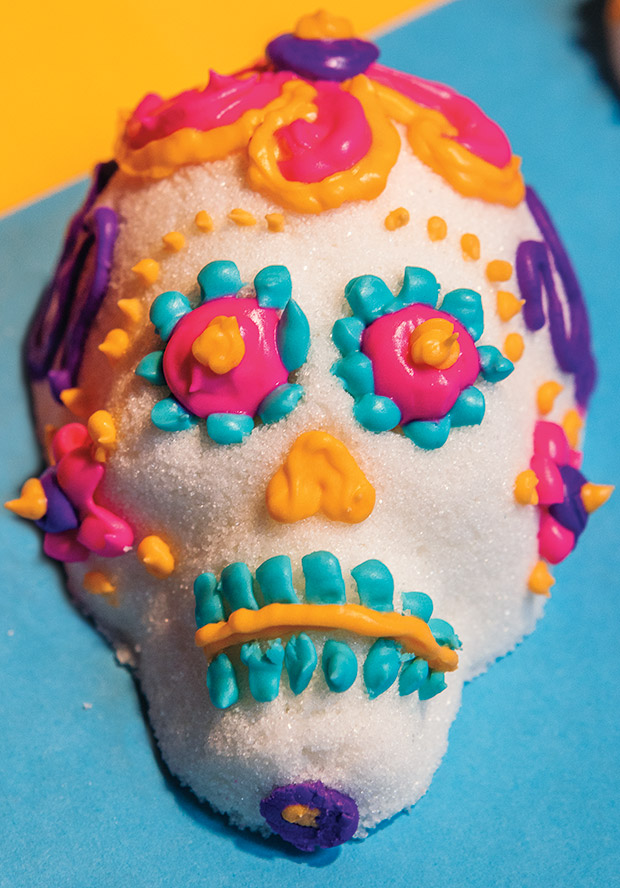 When my family moved to Texas from Michigan in the summer of 2014, I was still reeling from the loss of my mother, gone suddenly from my life at age 64, just six months earlier.

Our move to Austin seemed like a way to start fresh and heal the pain with a heavy dose of sunshine and good music. Instead, without my mother’s love as my compass, I often felt lost in a strange new place with two young children of my own.

Perhaps in search of emotional distraction, I found myself increasingly drawn to the Mexican cultural traditions characteristic of my new home. I spent numerous mornings lingering at the Mexic-Arte Museum, a showcase for Mexican art and culture in downtown Austin, and seeking out ballet folklórico performances. And then I discovered the Day of the Dead.

I had heard of Día de los Muertos but had never observed the tradition or attended one of the November celebrations. In so much of America, the funeral marks the end of our connection to our loved ones. The idea of an annual celebration to honor their continued presence in our lives spoke to me.

“In the Mexican culture more than any other culture, images of death are more integrated,” says Olivia Tamzarian, the Mexic-Arte Museum’s education coordinator. “I see Day of the Dead as a celebration of life and death. There’s always that constant dichotomy.”

In preparation for my first Day of the Dead in Texas, I purchased a plastic sugar-skull mold from the Mexic-Arte’s gift shop and set to work creating a makeshift ofrenda, or altar, in my home. My first surprise was how easy it was to involve my children in Day of the Dead. With their playful love of mystery, the kids were enchanted by the smiling sugar skulls and dancing skeletons on papel picado (colorful tissue paper punched out with festive images).

As we mixed meringue powder with sugar and water and packed it into the four-inch-tall skull mold, I talked to my son August, then four years old, about what kinds of things we should put on our altar to remember his grandmother, Bubbie.

The calavera, or sugar skull, is a natural entry point for kids to learn about Día de los Muertos, says Tamzarian, who spends much of her time at the museum guiding groups of school-aged youngsters through the rotating exhibits of contemporary and classic artworks.

“You eat it and you think about your own death, and it’s supposed to be fun. If you can laugh at something, if you can create something sweet that reminds us of death, then you’ve changed your association,” she says, noting the rich tradition of Mexican artists poking fun at mortality. Among the most famous was José Guadalupe Posada, a late 19th-Century printmaker who used skeletons as vehicles for political satire and humor.

Tamzarian says that something interesting happens when traditions like Day of the Dead move across the border and mix with elements of American culture. In Texas, grocery chains like H-E-B stock supplies for making sugar skulls, while in Mexico, the character Jack Skellington (from Tim Burton’s 1993 animated film Nightmare Before Christmas) appears on altars.

Ofrendas traditionally include photographs, mementos, and treats, ranging from dancing shoes to cigarettes. In Mexico, communities organize shared altars and everyone is encouraged to contribute. “It’s supposed to be an active space that families have built together, allowing the memories of their loved ones to shape the space,” says Tamzarian.

To our home ofrenda we added the books that Bubbie used to read to August, a few photos, and rum—she was famous for her piña colada recipe—plus our sugar skulls. Over the next few days, I added photos of other loved ones who had passed away, among them our grandparents and even some beloved pets. Putting the altar in the middle of our house provided my family an opportunity to talk about our memories more than we normally would. Though the tears still came regularly, I also found myself smiling a lot more.

Our first Día de los Muertos celebration was in Round Rock, hosted by local civic and cultural groups. We arrived at the Prete Main Street Plaza just as the sun was setting. Young girls were strolling through the square wearing traditional white blouses and brightly colored skirts, with their faces painted like skulls. Community ofrendas provided a place to write loved ones’ names, and vendors were selling calaveras and retablos, small painted altars venerating saints and icons such as Frida Kahlo.

As the evening wore on, elegantly dressed skeletons danced to the music of horns and drums while others with lighted rib cages and hearts paraded down the dark city street. For someone who grew up a long way from Mexico, it was a striking scene.

According to Día de los Muertos tradition, between November 1 and 2, the door linking the worlds of the living and the dead opens, and we can invite the spirits of our loved ones into our homes through our memories and our ofrendas. We can keep each other company once more.

In the darkness, among the crowd of strangers, I was grateful that I could hide my tears as I wished my mother could have seen such a sight. She had an adventurous soul and inspired my love for experiencing new cultures. Then again, the thought resonated that maybe she had been here all along.