Aboard the Tall Ship Elissa docked at Galveston’s Pier 21, two boys pause near the wide base of a towering pole. They both lean back and stare upwards. Horizontally crossed by massive spars and laden with intricate cables and lines, the central mast of this antique yet fully functional square-rigged sailing ship rises more than 99 feet above the main deck. After a moment of silent wonder, one of the boys, squinting and pointing toward a tiny platform high overhead, questions aloud, “Is that the crow’s nest?”

But his companion is already bounding up the steps to the aft deck and the helm, eager to find the large wooden steering wheel. Soon, as his father lines up a snapshot, he grasps the spoke handles and announces, “I’m the captain.” Then he enthusiastically rouses his imaginary crew, “Ahoy, mates, raise the plank. Anchors aweigh!”

On the Elissa—the Official Tall Ship of Texas and a National Historic Landmark—such whimsy comes easily for young and old. Even when berthed along the wharf, this grand, three-masted boat stirs the imagination, channeling that ancient human impulse to traverse the seas by harnessing the wind. Maintained by the Texas Seaport Museum, the Elissa also symbolizes the crucial role of 19th-Century seafaring craft in the development of the coastline-rich Lone Star State.

The iron-hulled Elissa (205 feet long from stern to jib-boom tip) first launched in 1877 from Aberdeen, Scotland. For 90 years it lugged commercial cargo to and from North America, South America, Europe, Africa, India, and Australia. At least twice during the 1880s it is known to have visited Texas. The Texas Seaport Museum, which is also located at Pier 21, displays an enlarged Galveston Daily News advertisement from December 1883: “The British bark Elissa having just arrived from Tampico with a small cargo of choice bananas, the same will be sold from the vessel at Labadie wharf this day in lots to suit the purchaser. Call early and secure a bargain.”

The Elissa’s connection to Galveston proved essential to its unlikely salvation. By 1970, the 19-sail freighter was deteriorating in Greece, destined for the scrap yard, its role in transoceanic commerce having been taken over by motorized vessels. Meanwhile, leaders of the nonprofit Galveston Historical Foundation were searching for an antique ship to symbolize the island’s nautical heritage. Upon learning about the Elissa, they raised $4 million to rescue, restore, rehabilitate, and return the majestic boat to Galveston, where it opened for public tours in 1982.

The foundation, which owns the Seaport Museum and the Elissa, undertook the challenge “to show how much of the wealth and how many of the people came to and from 19th-Century Galveston—that vital connection to seaborne commerce and immigration that got here on the decks or in the holds of ships like Elissa,” explains Jamie White, director of the Seaport Museum.

Even when berthed along the wharf, this grand, three-masted boat stirs the imagination, channeling that ancient human impulse to traverse the seas by harnessing the wind.

An internationally experienced ship-rigger and restoration expert himself, White notes, “They really did it the right way with quality craftspeople. Some of the best technicians in the business came out and worked on that project.” Since then, patrons and volunteers have donated funding and labor to keep the venerable vessel sailing. Every spring, for approximately two weeks, the Elissa takes a series of daytime excursions beyond the harbor and into the open Gulf, manned by a crew of licensed officers and volunteers (who earn the highly coveted passage with their year-round assistance). Moreover, in 1986 it voyaged to New York Harbor to represent Texas in the centennial rededication ceremonies for the Statue of Liberty.

“Elissa has been a very lucky ship,” White adds. “Whenever she needed something to happen to keep her viable, someone was there to undertake it and keep her seaworthy.” In the Seaport Museum’s theater, the 17-minute documentary film Passage to Galveston: The Story of the Elissa chronicles the initial effort to preserve one of the world’s oldest surviving sailing ships and the on-going commitment to maintaining it as an operational vessel.

The Texas Seaport Museum’s exhibits reach beyond the Elissa with additional displays and artifacts that highlight seaborne enterprises and events relevant to Texas history. Among items in the main hall are a well-worn dinghy suspended from the ceiling, an anchor and wheel from the 1937 shrimp boat Santa Maria, antique navigational tools and devices, various vessel components (such as a deck prism, which was used to disperse daytime light below deck), scale models of ships, and numerous historical photographs, drawings, paintings, and maps.

One display focuses on seaport commerce, particularly the cotton trade and equipment or techniques for compressing, baling, lifting, and loading the fibrous commodity. At the dawn of the 20th Century, such business had made Galveston the state’s most prosperous city. Yet the city’s history changed course with the devastating 1900 hurricane, known as the Great Storm, which is featured in another exhibit. The hurricane prompted many businesses to abandon the barrier island for the mainland port of Houston. 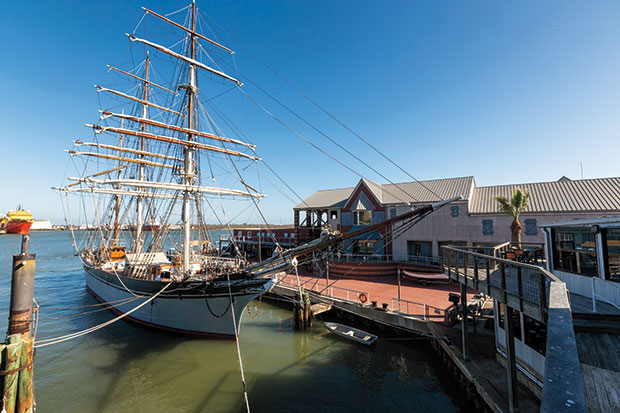 Tall Ship Elissa at her berth at the Texas Seaport Museum

The museum also explores the topic of U.S. immigration via Galveston, formerly known as “the Ellis Island of the West” (the government closed the local processing station during World War I). An exhibit titled Diverse People, Diverse Ideas traces the evolution of various demographic patterns, such as the many German-born settlers that arrived on boats direct from Europe between 1839 and 1853. It also spotlights the 10,000 Jewish refugees who fled ethnic massacres in eastern Europe and Russia and, assisted by various benevolent societies and Rabbi Henry Cohen of the local Temple B’nai Israel, arrived in Galveston between 1907 and 1914. A nearby computer station allows visitors to search the Galveston Immigration Database for records related to their ancestry.

The museum’s second floor houses an exhibition devoted solely to the Texas Navy, which formed in 1835 during the Texas Revolution and lasted 10 years through the Republic period until Texas joined the union. Its most impressive relic is a long cannon from the Brutus, commissioned for naval service in 1836. The largest of nine guns mounted on that ship, it was recovered from waters off Galveston in 1884. Various tools and equipment used to fire such weaponry are on view, too. Other presentations document the Texas Navy’s ships, flags, sailor uniforms, and major events.

Downstairs at the main entrance, a nautical-themed gift shop offers souvenirs, toys, and books about Texas maritime history and general seamanship. The shop also sells museum tickets ($12 for the Elissa and Texas Seaport Museum; $9 for children age 6-18), as well as tickets for Galveston Historical Foundation’s daily harbor tours and dolphin-watching expeditions aboard the Seagull II, a twin-hulled motorized boat.

The Texas Seaport Museum, located just across Harborside Drive from Galveston’s popular Strand District and not far from the cruise ship terminal, draws thousands of visitors year round. Yet some surely discover it serendipitously while dining at any of the nearby waterfront restaurants, such as Willie G’s, Fisherman’s Wharf, Olympia Grill, or Nonno Tony’s. Moored not far from dockside dining tables, the impeccably restored Elissa, with its brass-accented woodwork, soaring masts, booms, and spars draped with approximately seven linear miles of lace-like rigging, is an alluring sight to behold—a distinctive billboard, so to speak, for the museum.

Yet the essential appeal of the Elissa runs deeper, for it is not only an artfully preserved 139-year-old historical artifact. “Sailors and ships rot in port,” says White. “She’s a museum ship, yes, but a living, working vessel—a historic ship, not a replica. But what makes her special is she actually sails.”