A Weekend Getaway in Bell County

An abundance of craft brews, barbecue, and Texas history await in Belton and Salado 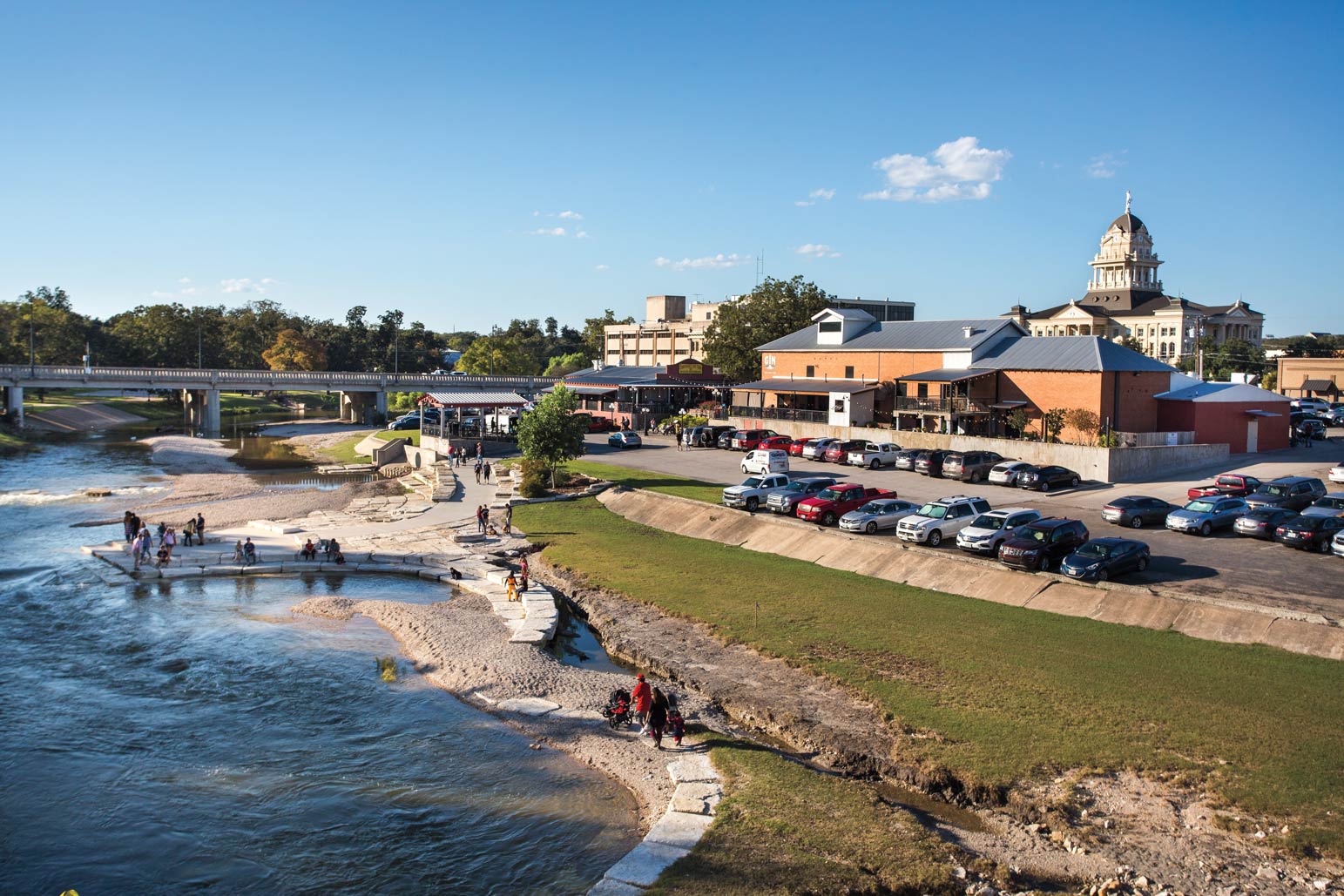 Located in the heart of Texas, just off I-35 between Waco and Austin, Bell County is far enough from hipster joints and the urban hustle to provide a dose of small-town Texas—but close enough for a weekend getaway. For barbecue enthusiasts, Belton’s stellar smoked meat purveyors provide reason enough to exit the interstate. But the area’s appeal goes well beyond brisket: There is camping, fishing, and boating on Lake Belton; hiking in state parks; craft beer, and a free-spirited creative community; and plenty of shopping in nearby Salado. It’s a diverse community where the camouflage population of Fort Hood intermingles with co-eds.

Early on, Belton’s location on Nolan Creek fueled its growth. In the 1870s, most businesses were devoted to cotton and the numerous cattle drives on the Chisholm Trail. After a fire destroyed Belton’s business district in 1879, locals rallied to build the town’s first cottonseed oil mill (and more gins to follow). The best way to appreciate the area’s charms and understand its rich history is to spend a weekend soaking it all up. 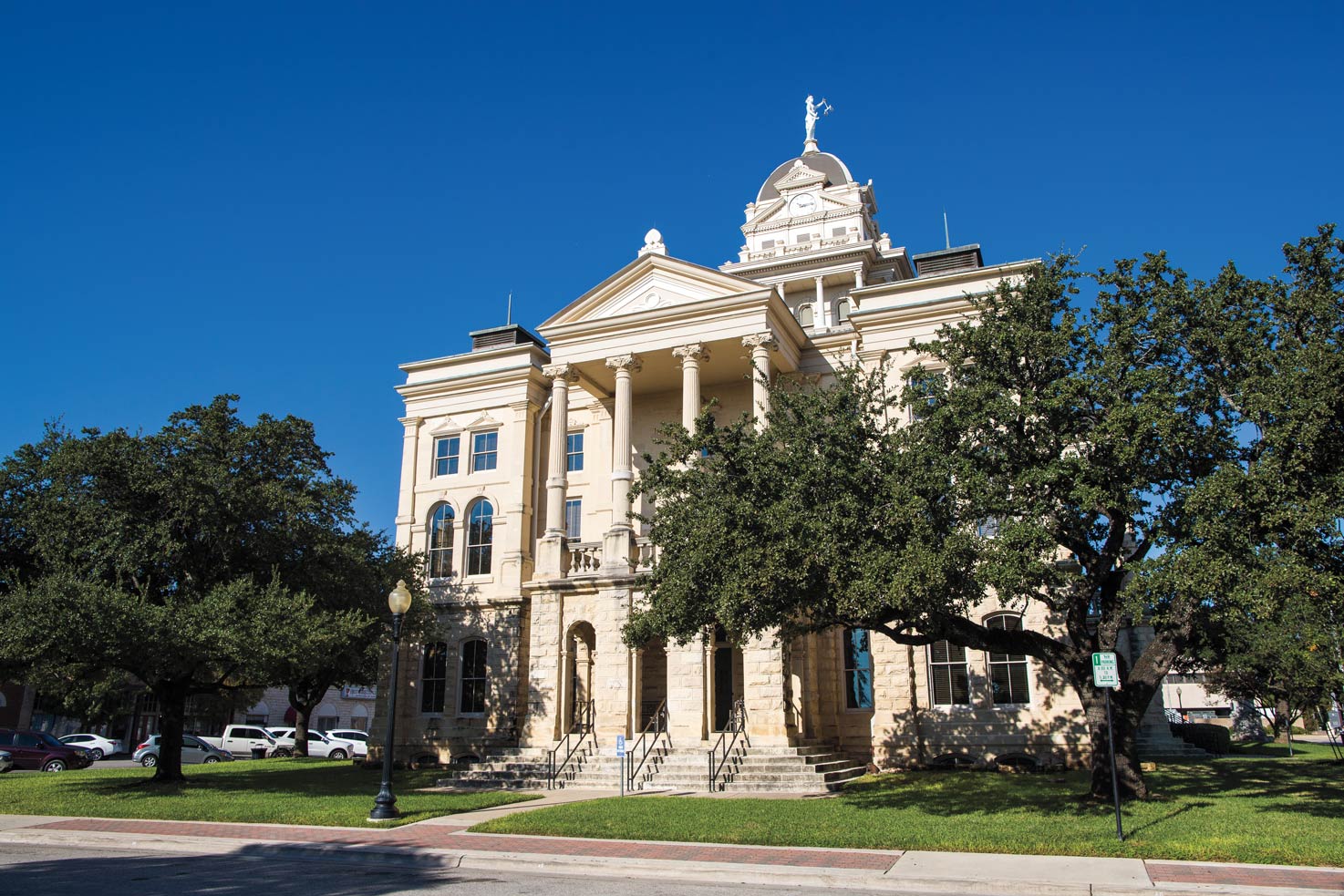 It started with Gilmore Girls, James Sharp explains. First his wife, Sara, fell in love with the popular television series—and then with the dream of running an inn (as the main character does on the show). So last summer, the adventurous couple—passionate cooks and former school teachers from Killeen—purchased the Yellow House Bed and Breakfast in Salado from its previous owners. The B&B is a mini hamlet of cottages, historic houses, and four guest rooms in the main house. The option to have your own private porch swing makes an ideal setting for couples or small groups who want a serene rural setting, friendly hospitality, and proximity to gallery hopping downtown.

It took a petition, an election, and some serious spirit rousing for husband-and-wife duo Graydon and KD Hill to open Barrow Brewing Company in Salado in 2016—Bell County’s first microbrewery. Grab a seat in the stylish tap room and notice the knotty pine walls (which are original to the structure, an old grain silo). Then kick back with a pint of Evil Catfish IPA–named after a local mermaid legend–or 784 Belgian Witte, an orange- and coriander-scented brew named after the number of residents who voted “yes” for a brewpub in 2014, enabling the brewery to establish itself downtown.

“Graydon and I knew we wanted to put down roots in Salado and were inspired by the local artisans and makers who call this village home,” KD says. “Craft beer has a way of bringing people together.”

Follow the aroma of mesquite coal-fired meats to Schoepf’s Bar-B-Que, the oldest barbecue restaurant in Belton. Owners Ronnie and Staci Schoepf purchased the business from Ronnie’s parents in 2007. Over its 25-year history, the family business has amassed a devoted following among locals, visitors, and even celebrities–they’ve prepared ’cue for everyone from Oprah to Air Force One.

In addition to their bounty of smoked meats (brisket, chicken halves, bacon-wrapped quail, and their “big chop”—a massive, two-inch-thick pork chop), there are freshly made sides (like crispy cucumber salad) and Tex-Mex offerings, so good luck deciding between brisket nachos or the rib-eyes cooked to order on Friday and Saturday nights.

The restaurant has won numerous accolades, but Ronnie stays focused on the big picture. “We’re a restaurant, not a brisket store,” he says. “There are lists of the best this and the best that … but I think we offer the best overall barbecue experience you can find.” Indulge in a slice of homemade caramel cake—you can dance it off in their backyard venue, which hosts live music on occasion. 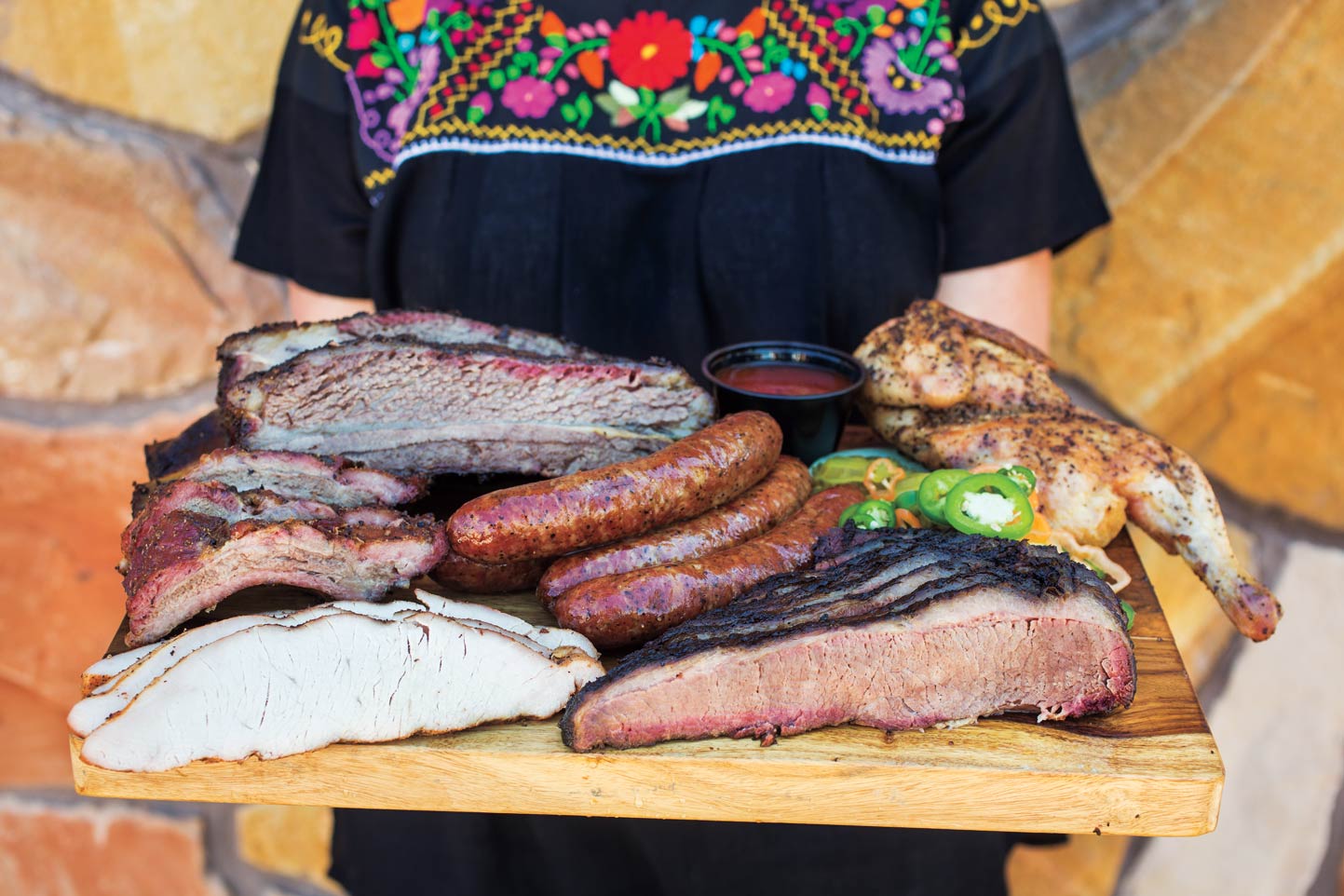 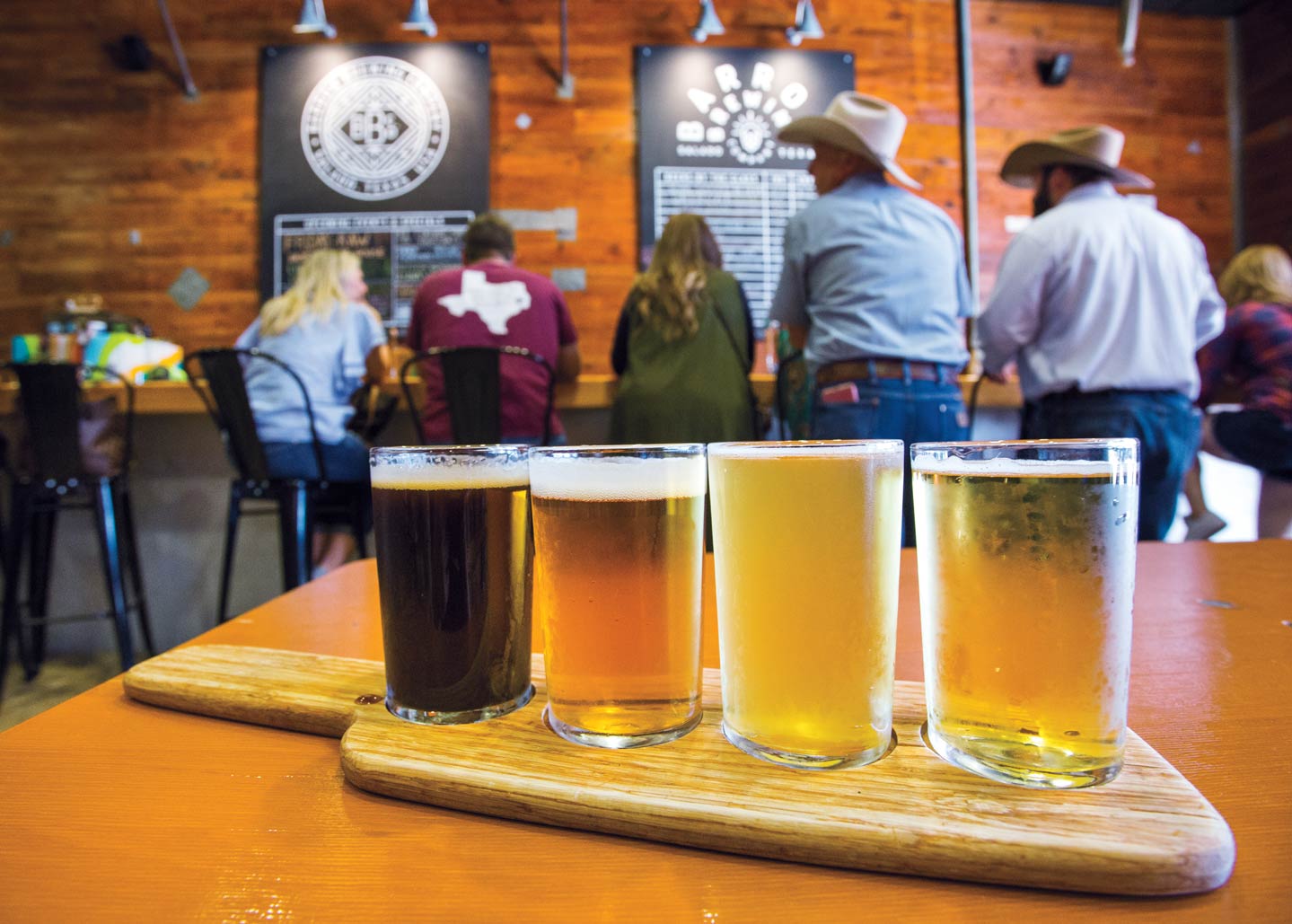 After fueling up on The Yellow House’s breakfast (which might be bacon cheddar bread pudding or peach croissant French toast), head to Belton. The best way to appreciate the charms of its historic downtown is on foot, so park your car and start at Cochran, Blair & Potts, the oldest operating department store in the state. The store’s interior shows its age in all the best ways, thanks to a recent restoration of the original brick walls, wood floors, and tin ceiling. It’s a pretty setting to peruse merchandise that ranges from practical (denim shirts and work boots) to home décor.

Across the street, a red neon “Texas” sign illuminates the entrance at Exchange on Central, a rabbit’s warren of around 75 vendors selling vintage kitchenware, handmade gifts, and upcycled furniture. Down the street, the three-story, Renaissance Revival-style 1885 Bell County Courthouse is a stunning example of the Golden Age of Texas courthouses.

You need to keep your strength up, so join the queue at Miller’s Smokehouse, a family-owned operation that first opened in 2008 and relocated to its swanky corner digs in 2016. Exposed brick, an Italian espresso machine, and refrigerator cases brimming with takeout options bring a contemporary edge to the traditional Texas barbecue prepared by father-son pitmasters Dirk and Dusty Miller. Dirk’s wife, Lisa, oversees from-scratch desserts like chocolate pudding cake, sopapilla cheesecake, and banana pudding.

With its handsome 1904 Carnegie Library façade, the Bell County Museum is a stately place to delve into the area’s history. A mix of permanent and traveling exhibits encourage visitors to play archaeologist in the interactive Gault Site exhibit and learn about people and places that shaped the region, like Bell County native Miriam A. Ferguson, one of Texas’ first ladies and the first female governor of Texas. Don’t miss the Little River Log Cabin—a reconstruction of a one-room house built in the 1850s near Little River, the county’s earliest Anglo settlement—and the museum’s whimsical collection of moustache tea cups. Popular during the second half of the 19th century, when prominent moustaches were in fashion, the cups feature an inner shelf across the top edge that protected one’s moustache from coffee, hot chocolate, or tea.

A few blocks away (past Belton’s original Katy Depot, built in 1882), settle in with a pint of Lake Day Lager or a flight of new brews like Jalapeño Cream Ale at Bold Republic Brewing Company. Expect a friendly crowd, sports on television, and a mix of beer geeks and families gathered at picnic tables with pizza or playing cornhole outside. Farm-to-table enthusiasts should head to Ramble in Salado for chef Jacob Hilbert’s seasonal, locally sourced cuisine like roasted shiitake mushrooms with guanciale, garlic, and honey reduction; Gulf blue shrimp with a corn and saffron veloute; or 44 Farms beef filet. With desserts like warm apple and pecan galette and dulce de leche macarons, you’ll want to save room. 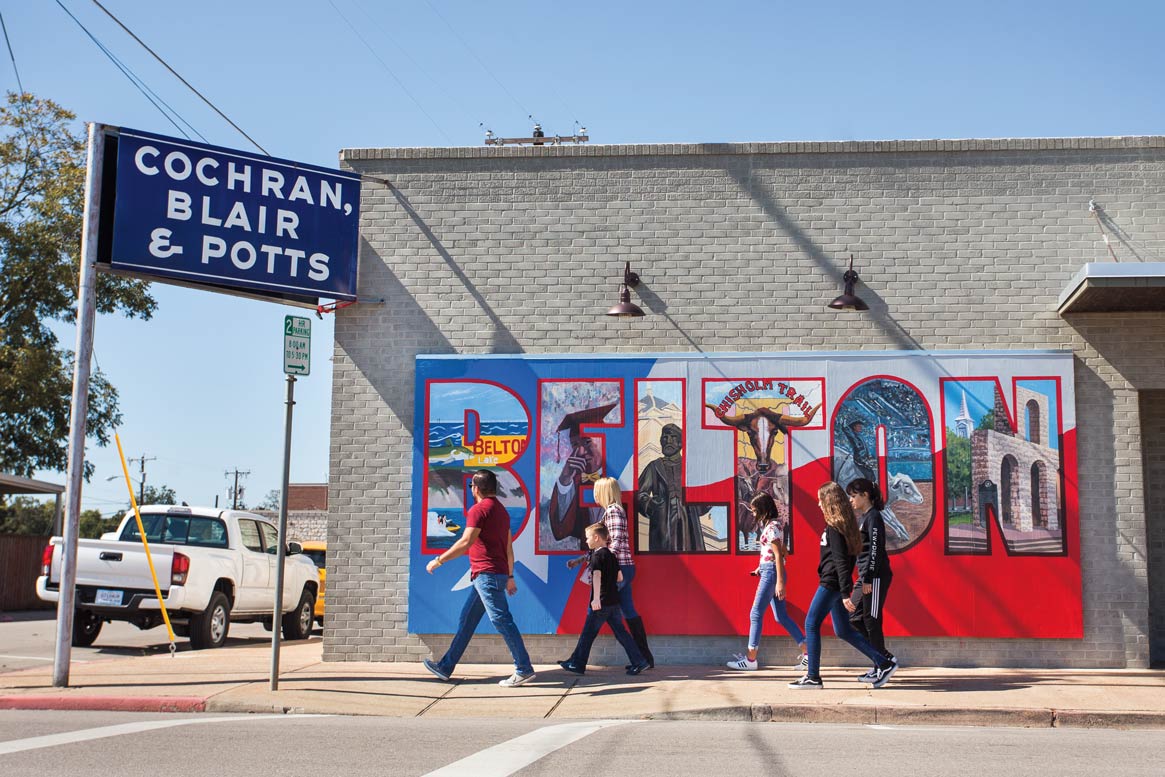 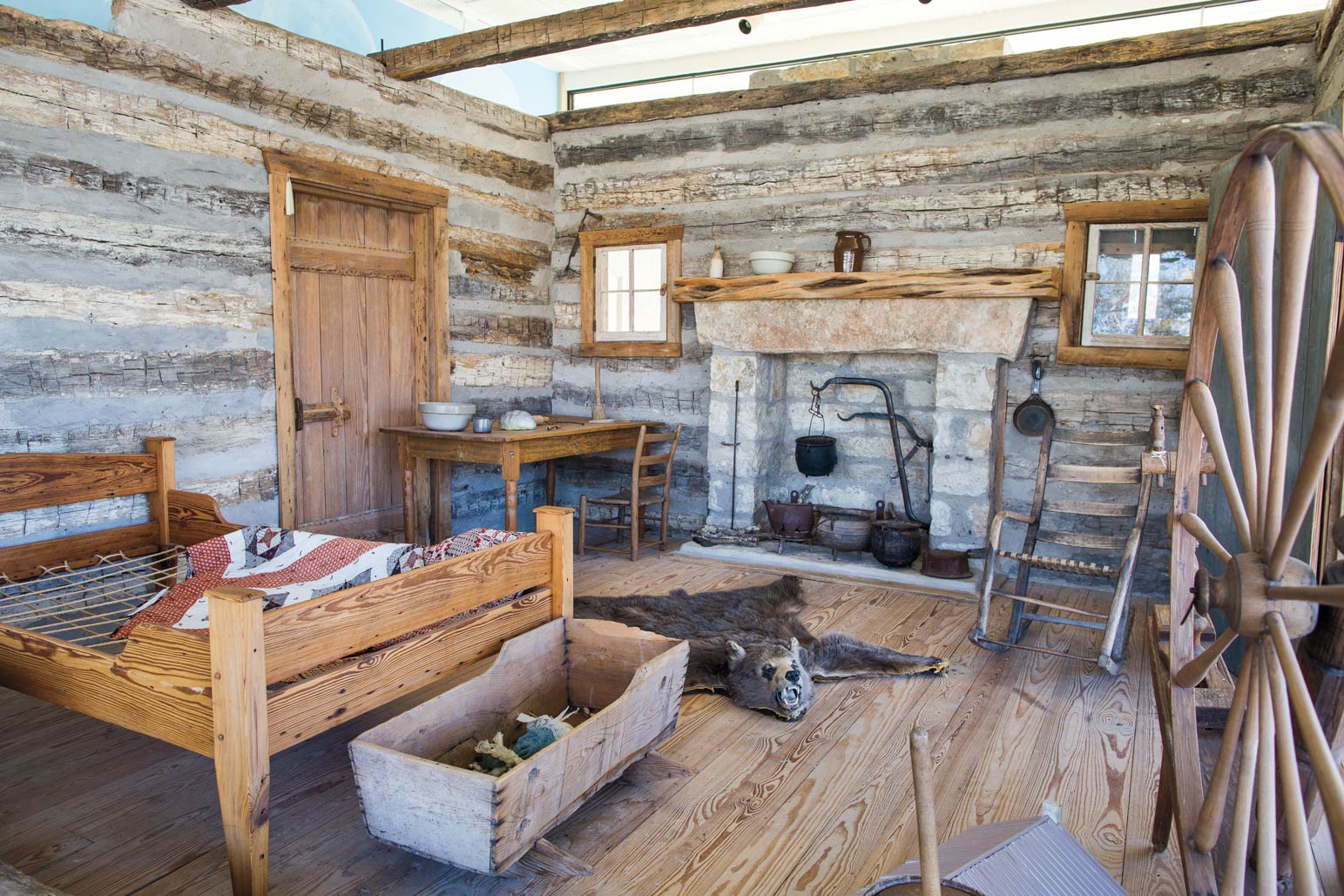 A few blocks away (past Belton’s original Katy Depot, built in 1882), settle in with a pint of Lake Day Lager or a flight of new brews like Jalapeño Cream Ale at Bold Republic Brewing Company. Expect a friendly crowd, sports on television, and a mix of beer geeks and families gathered at picnic tables with pizza or playing cornhole outside. Farm-to-table enthusiasts should head to Ramble in Salado for chef Jacob Hilbert’s seasonal, locally sourced cuisine like roasted shiitake mushrooms with guanciale, garlic, and honey reduction; Gulf blue shrimp with a corn and saffron veloute; or 44 Farms beef filet. With desserts like warm apple and pecan galette and dulce de leche macarons, you’ll want to save room.

Any good getaway should end with brunch, and Belton’s Gin at Nolan Creek—housed in a 1927 brick cotton gin that’s been carefully restored and converted into a beautiful restaurant complex—serves Texas-inspired comfort food like chicken-fried steak, Texas cheese-steak made with shaved rib-eye, and donut bread pudding.

“We have so many good neighbors—shopping, spas, top-rated barbecue, and pizza—all good people working together for the benefit of downtown,” managing partner Evan Morrison says.

The eatery anchors a cluster of other casual restaurants that lead to the creek’s newly restored waterfront—designed for kayaking, tubing, and family fun. Try to decide between the ham and cheese omelet or “Cotton Balls” (bacon-wrapped and jalapeño cheese-stuffed chicken bites) and crispy waffles. Don’t fret for too long though. Chances are, Belton will have left its mark, and you’ll be back for another taste soon.