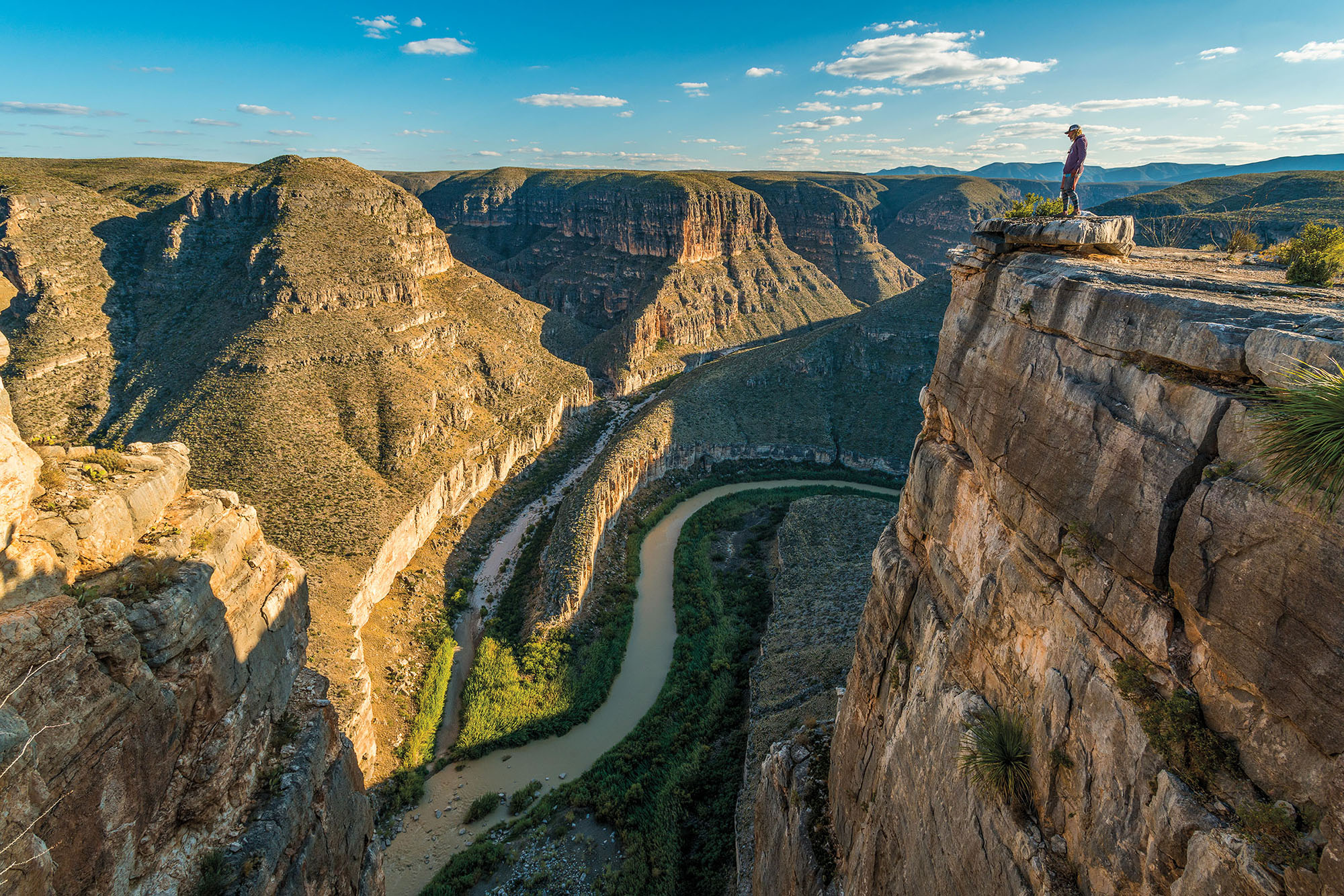 Exploring the most secluded
reaches of the mighty Rio Grande

The bovine skull came into view as we rounded a bend on the Rio Grande, setting a scene like the desert backdrop of a Wile E. Coyote cartoon. With its muzzle down, horns up, and carcass stretched as flat as a carpet, the cow had apparently come to the dirt bank and lay down for its final rest. Only the effects of time and weather had disturbed it since.

Drifting past the desolate sight, I marveled at the glory and isolation of exploring one of Texas’ wildest places—the Lower Canyons of the Rio Grande. Last November, I joined photographer Laurence Parent and a party of nine others for an 83-mile paddling trip along the Texas-Mexico border. For seven days, we followed the river’s verdant strip through a chain of dramatic canyons bisecting the rocky slopes and arid flats of the Chihuahuan Desert. We didn’t see another soul for the entire trip, unless you count bighorn sheep, canyon wrens, and peregrine falcons.

“This is a good trip for people who want a true wilderness experience,” said Greg Henington, the leader of our expedition and the owner of Far Flung Outdoor Center, based in Terlingua. “It’s remote, wild, and vast. A lot of people don’t even realize this is down here in the Lower 48. But I would say this is not a trip for first-timers. You can get in trouble in a hurry.” 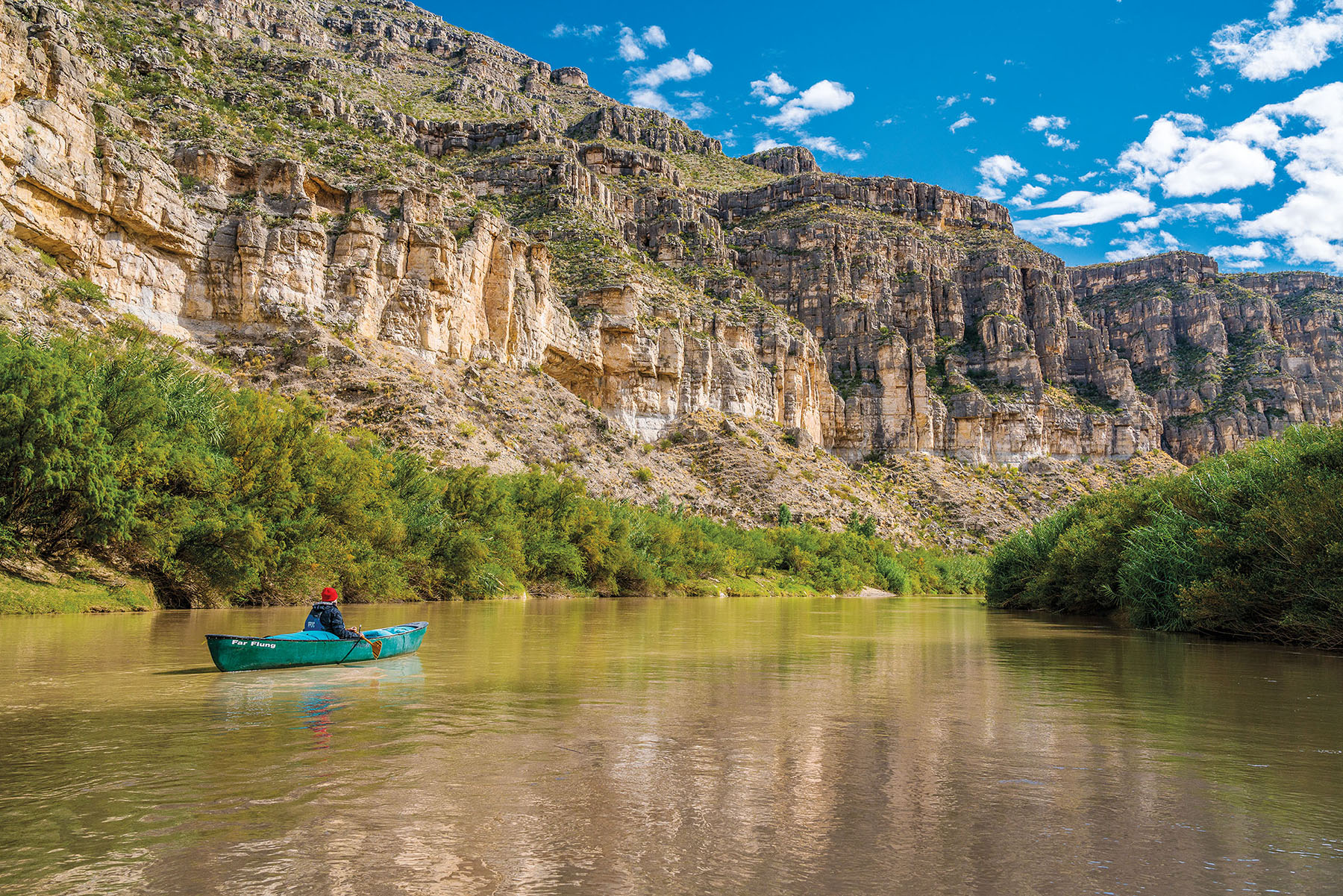 TOP OF PAGE: The view of the Rio Grande and Arroyo del Tule from Burro Bluff.

THIS SPREAD: Our group took four rafts and one canoe. “It’s one of the most remote places I’ve been anywhere in the U.S.,” photographer Laurence Parent said. “Although we had rain and clouds at times, the canyons are so beautiful I still got more good photos than I know what to do with.” 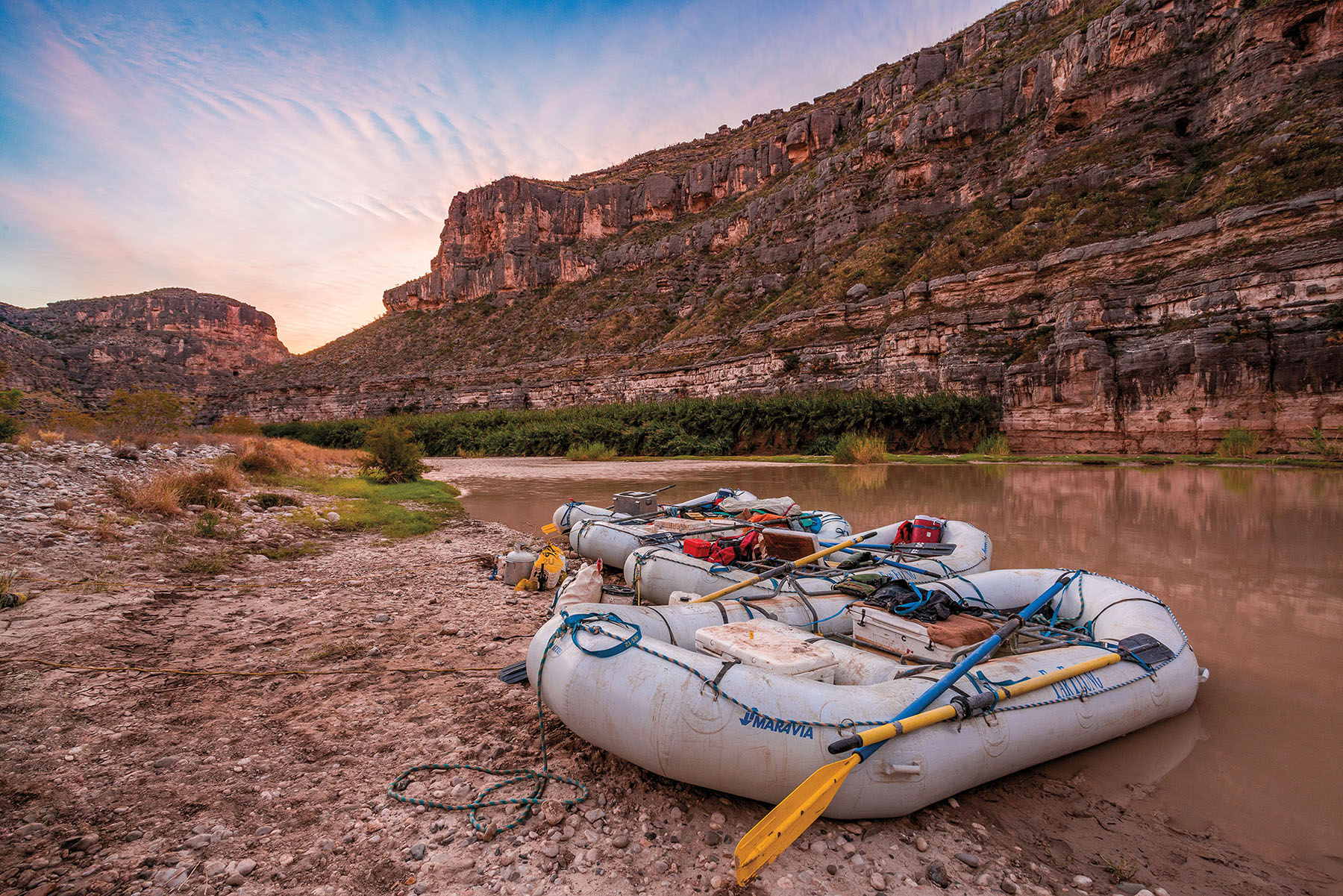 Only about 400 people run the Lower Canyons each year, according to Big Bend National Park. Though the Lower Canyons are downstream from the park boundary, the National Park Service requires backcountry permits for the trip because Congress has deemed this stretch of the Rio Grande a “Wild and Scenic River.” The 1978 designation calls for the park to work with local entities and landowners to protect the river environment for recreation.

It’s hard to imagine development springing up along this distant stretch of the Rio Grande, which runs northeast from the southern dip of the Big Bend. We saw few signs of humanity across the meandering miles—a shuttered Mexican fluorspar processing plant, a couple of rickety fishing cabins, ancient mortar holes in the bedrock, a ranch house, ranging cattle, and a shack perched on a cliffside ledge with a pipe hanging down like a straw. Turns out the shack was once a pumphouse, built 80 years ago to suck river water hundreds of vertical feet to a makeshift factory that extracted wax from candelilla plants.

For a sense of the Lower Canyons’ isolation, consider that nobody surveyed this part of the Rio Grande until 1899—30 years after John Wesley Powell made his pioneering trip through the Grand Canyon of the Colorado River. A geologist named Robert T. Hill led the 1899 expedition. His detailed account, published in The Century Magazine, captures the highs and lows of a monthlong Rio Grande expedition from Presidio to Langtry. Traveling in three heavy wooden boats, the six-man party weathered the extremes of desert climate, unpredictable rapids, and exhaustion. But Hill emerged a convert, and he later was a vocal advocate of the establishment of Big Bend National Park. 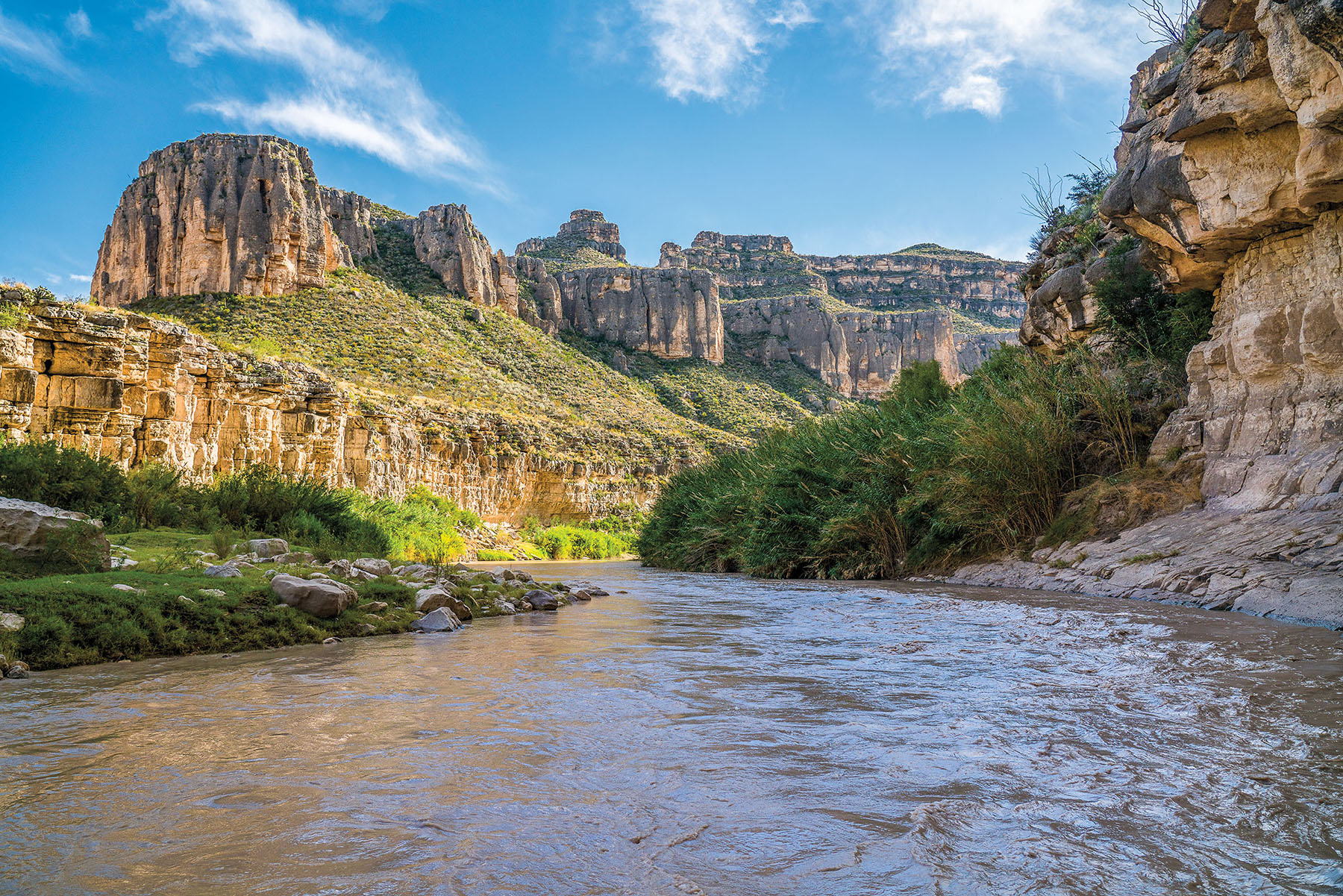 “The solemnity and beauty of the spectacle is overwhelming,” Hill reported. “One is constantly surprised by new types of sculpture and scenery. The sculpture is marked by queer, eccentric pinnacles projecting above the ragged skyline—spires, fingers, needles, natural bridges, and every conceivable form of peaked and curved rocks.”

Hill’s surprises are real. From my riverine perspective, I felt like I was floating through a gallery of grandiose landscape paintings, though not even Thomas Cole could mimic these vistas. Around each bend, beautiful new horizons unfolded. At the famed Bullis Fold, the river bisected an anticline, where rock striations lifted like falcon wings from either bank. At another point, the evening sun highlighted Cerro El Sombrero, a solitary butte that rose like a hat crown over an empty expanse known as Outlaw Flats.

Then there was the mesmerizing spectacle of whitewater crashing over boulders. We were always on alert for the roar of rapids, a sound both seductive and menacing. Our trip navigated 13 rapids, some mild like tube chutes and others akin to riding a bull. I paddled several of them in the canoe, capsizing in the chilly water only twice, which was pretty good for me.

I was free to enjoy the scenery in large part because our trip was supported by three hardworking guides. The members of our party took turns paddling the solo canoe, while Henington and the guides rowed four rafts packed with passengers, tents, sleeping pads, tables, folding chairs, a toilet, ice chests, food, water, and kitchen gear. Along with Henington, the guides handled the logistics of our caravan: They scouted rapids, picked campsites, and loaded and unloaded the rafts. 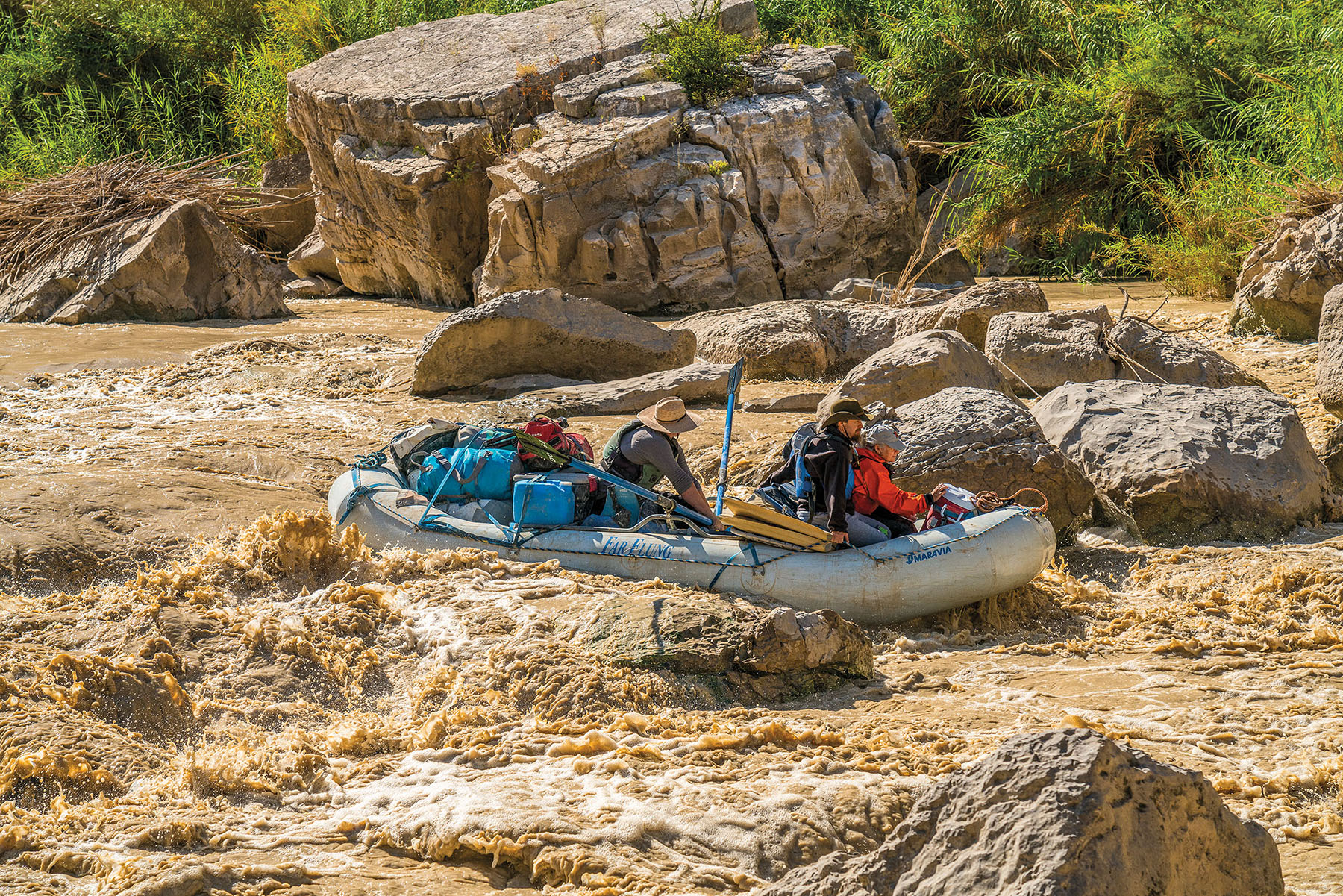 “For a week we didn’t think about cellphones or Instagram or any of that—it’s just dialogue among the group, solving puzzles on the river,” said Greg Henington, owner of Far Flung Outdoor Center. “It’s a great equalizer for all of us. I think, ‘Geez, if I can do this, I can do pretty much anything.’”

The guides were also responsible for the cooking—hearty dishes like New York strip steaks, chocolate cake, French toast, and Starbucks coffee—while I had the freedom of evening downtime to hike the surrounding canyons. At Silber Canyon, I soaked in hot springs of clear warm water that poured forth from a jumble of boulders before flowing into the muddy river. At Burro Bluff, I hiked to the top of a 900-foot limestone face, then toyed with vertigo on the ledge, eyeing the sliver of river far below. At San Francisco Creek, I followed a dry, rocky tributary far enough inland that I could no longer hear the flow of the Rio Grande. It was the purest silence I’ve ever experienced. In the shifting breeze, I imagined wind whistling across cactus spines and the snooze of a napping mountain lion.

On these hikes, I’d watch the sun wane as Parent clicked photo after photo, always hungry for that perfect shot. Raised in the Desert Southwest, Parent has hiked the Big Bend region more than anyone else I’ve met. But he knew moments like these were rare. “This is the third time I’ve been here,” he reasoned, “and every time, I think I’ll never be back.” 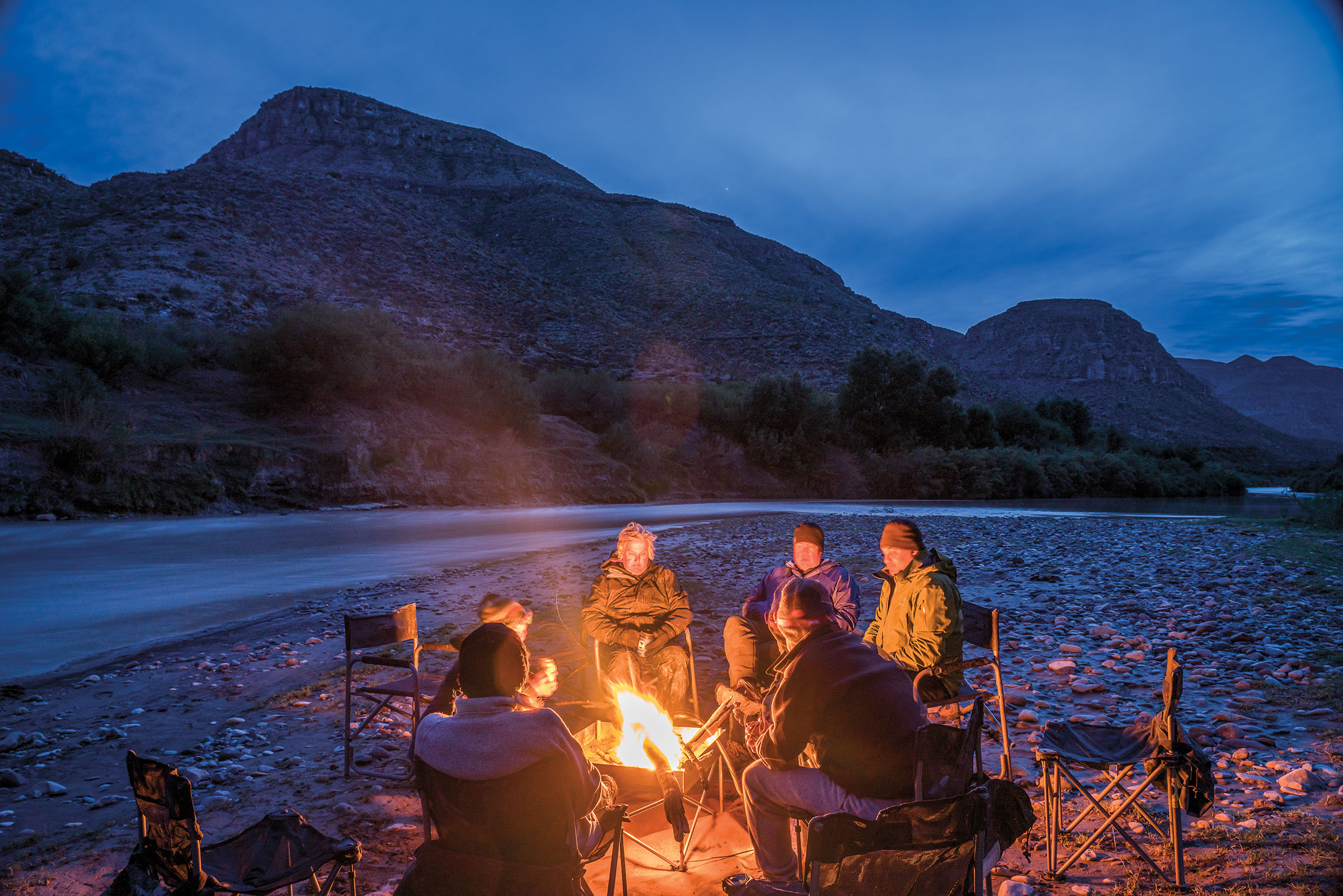 BELOW: Pools in San Francisco Creek. “I don’t think I’ve ever had a time in my life with so much silence,” said Ruthie Douglass, of Sisters, Oregon. “Not lack of sound but simply no noise—just the sounds of the water, weather, wildlife, and our group. I don’t know how many places in the world you can go and get that.” 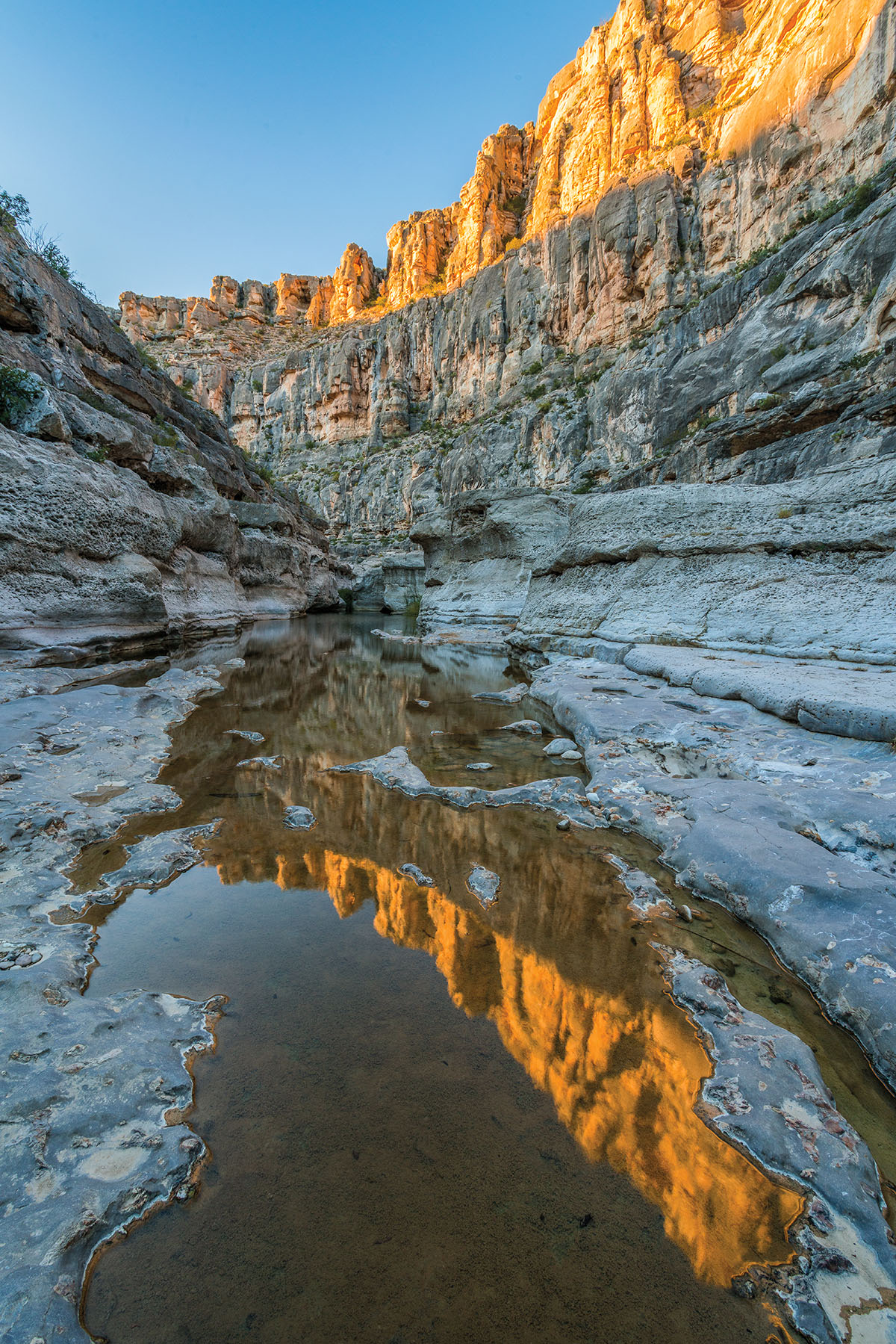 It’s interesting how wilderness can alter your perspective. Near the end of his journey 121 years ago, Hill was, understandably, ready to get back to civilization. “We no longer appreciated the noble surroundings,” he wrote. “We longed only to escape from the walls, upon which we now began to look as a prison.”

But for me, on a trip one-quarter the duration, the opposite was true. I remember breaking camp the fourth evening on a grassy bank near Palmas Canyon. After a couple of tough days of rain and near-freezing temperatures, the sky began to clear, and I set my gear out to dry in the desert air. In every direction, limestone bluffs hemmed the horizon, framing an open sky that darkened from marbled dusk to a sparkling Milky Way. In my daily life in Austin, walls stack up around me in a series of confinements—fences, high-rises, cubicles. But out on the Rio Grande, the walls of the Lower Canyons echo with liberation. 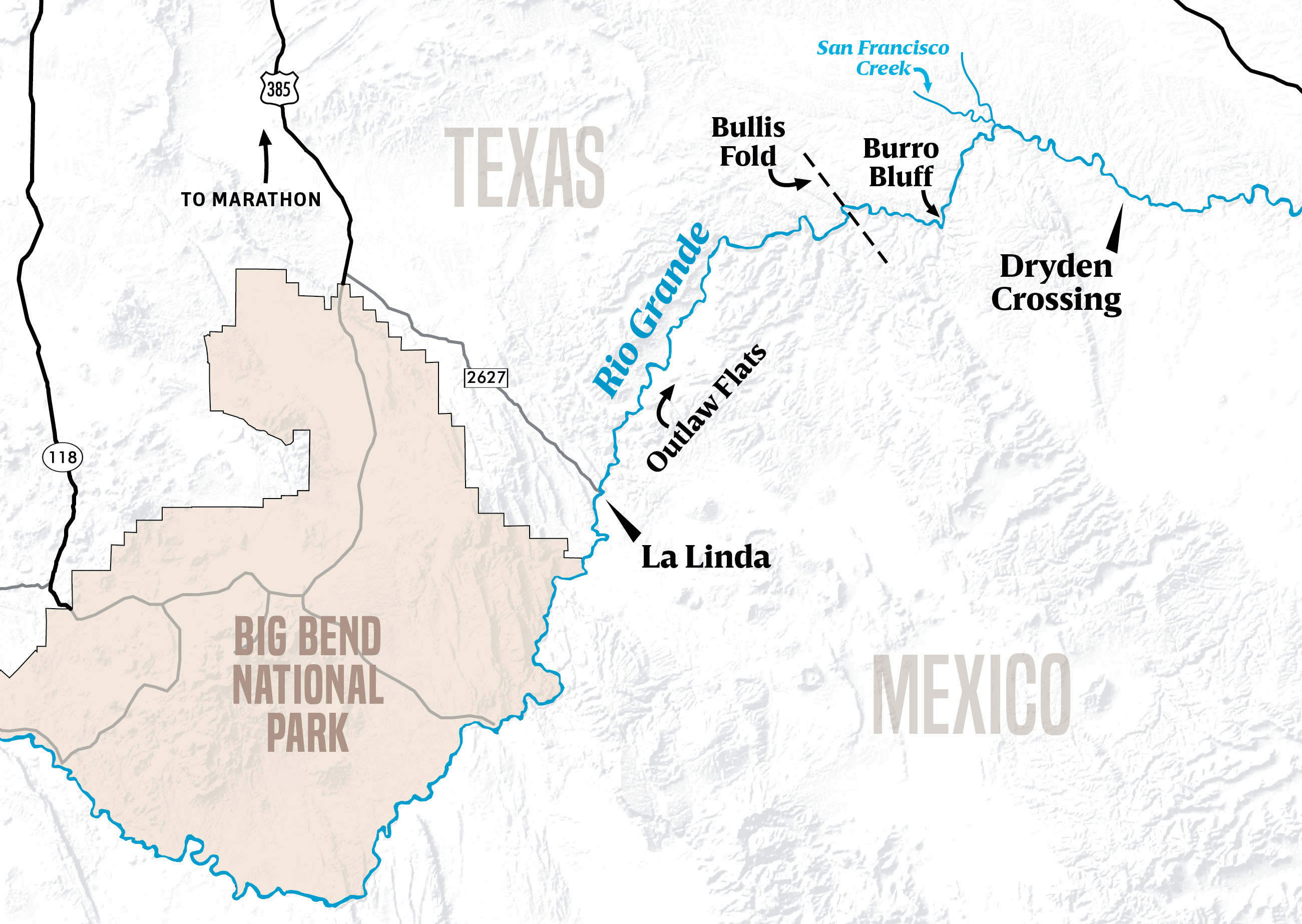 The most popular run on the Lower Canyons of the Rio Grande spans 83 miles over seven to 10 days. Outfitters offer guided trips, or if you prefer to do the trip yourself, they can help with planning, equipment, and shuttles.