Albany shares the season, along with small-town charm. 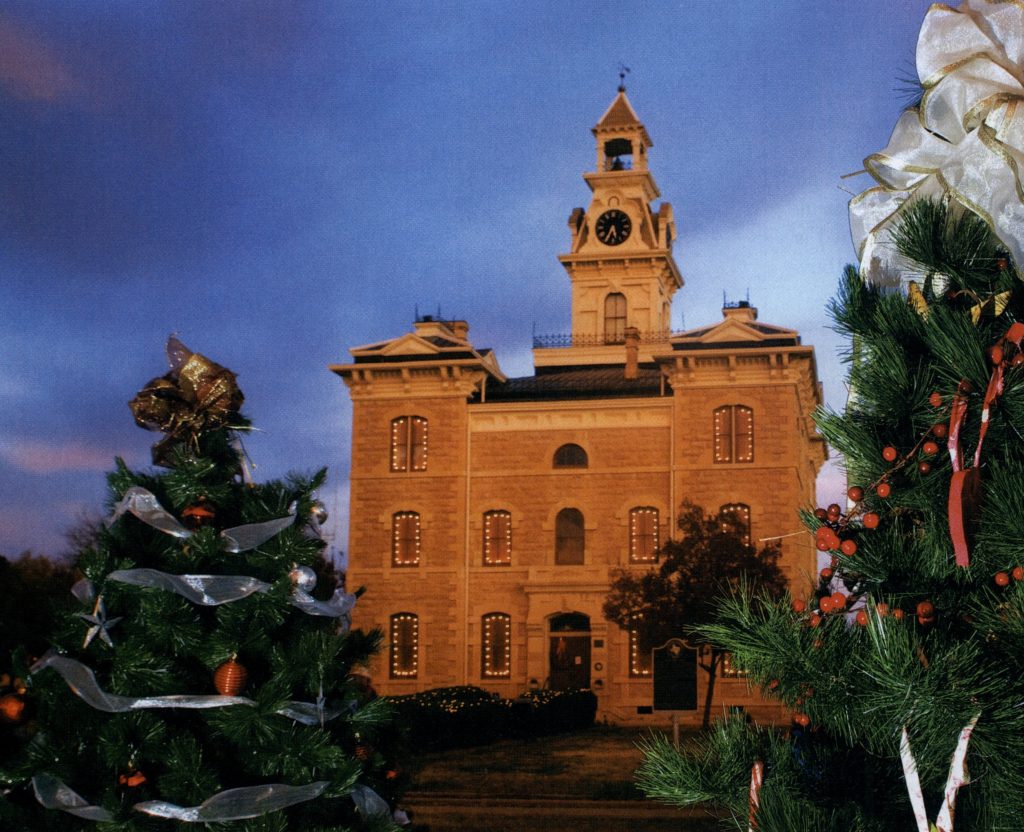 Albany celebrates its history and the holiday season with An Old-Fashioned Christmas, an event that includes caroling, tree lighting, and a parade that circles the courthouse. Photo by Michael Amador.

The holidays are a time for excitement, and there’s nothing like seeing the lights come to life on a decorated tree to create a burst of enthusiasm for the spirit of the season. On the Saturday after Thanksgiving (November 28 this year), Albany will light up the tree on its courthouse lawn as part of An Old-Fashioned Christmas, a holiday event that pumps up the town’s already-strong community spirit by drawing the area’s residents together with visitors.

In addition to the tree lighting and general good cheer, the Old-Fashioned Christmas gathers carolers to sing traditional songs and culminates in a parade that includes horse-drawn wagons rumbling up the street and around the courthouse. Of course, some of the 20 or so floats are motorized in one way or another, but the important thing is the way the event draws an enthusiastic crowd.

Holly Bernard, who owns Blanton-Caldwell Trading Company on Main Street, describes the events: “It’s like a huge, street-long block party that really brings the town to life. I have to say, I was amazed at the parade last year. I know people who brought their family to town in the early afternoon and had a great time all day and into the evening.”

These holiday activities, along with the town’s ongoing restoration and renovation projects—as well as  the interesting new businesses they house—make the area worth a few days’ visit. In addition to operating the Blanton-Caldwell Trading Company, a surprising combination of women’s boutique, hunting and outdoors gear-outfitter, and gift shop, Bernard is renovating a building across Main that once housed the community grocery.

Also across the street from Blanton-Caldwell is the newly refurbished Sanders Drug Store, brought back to life by Mike and Betsy Parsons. They extended the
original marble counter of the soda fountain and included many of the store’s original fixtures in the renovation, so the effect is truly of revisiting a bygone era. Mike Parsons, who suggests that Betsy is behind all the good ideas, is quick to invite visitors to the soda fountain for “a real Coke.”

There are other ways that Albany residents (Albanians?) celebrate the town’s past and bring it into the present. For typical small-town community spirit, it’s hard to beat a supper served by the volunteer fire department, and the Albany VFD will serve a chili supper—the same afternoon as the parade—in the restored Aztec Theater, also on Main.

Just down the street, the Ledbetter Picket House (next door to the original train depot/visitors center) opens for tours. The dogtrot cabin was first built in the mid-1870s near Fort Griffin, where it served as a home and ranch headquarters. The rugged structure was moved to its current site in Albany in the early 1950s. The cabin is unusual because its walls are vertical poles, or pickets, rather than horizontal logs. To keep the old-fashioned spirit of the event, Texas Historical Commission staff will have the cabin dressed up with period decorations.

Just a week after the Old-Fashioned Christmas, on December 6, 2009, Albany opens a half-dozen of its noteworthy homes to visitors from 2 to 5 p.m for the annual homes tour. The tour includes both historic restorations and more recently built, but no less inviting, homes.

For another holiday event, this one at the Old Jail Art Center, Charlie Rose and Dan Peeler, artists-in-residence at the museum for more than two dozen years, delight young audiences with puppet performances on December 1 and 2 this year. Each performance is followed by a demonstration of the art of puppeteering for the youthful crowd. As Rose explains, “It’s a musical variety show using popular music, and each of the scenes lasts about two minutes. For example, we have a Brave Combo arrangement of Frosty the Snowman in which Frosty juggles his head.” Whether Frosty loses his head or not, the puppets are a perennial favorite, as is the museum.

Fort Griffin State Historic Site, 15 miles north of Albany on US 283, is always worth aside trip. The sweeping views from the site are all the more impressive since the Texas Historical Commission has cleared away invasive mesquite and prickly pear. The THC, along with the Friends of Fort Griffin, continues to plan additional improvements to the site as well as to include more activities for each season’s calendar.

Just a few miles farther afield from Fort Griffin, after a circuitous route on unpaved backroads, intrepid explorers can find the historic marker that designates the site of Robert E. Lee’s 1856 meeting with Comanche chief Catumsehin the “principal village of the Comanche Indian Reserve” established here in 1854.

There’s no question that the people of Albany enjoy talking about their town. Luckily for visitors, many of them put their money where their mouth is in order to make restoration projects and the down home public celebrations come to life.