Starting with the Lone Star Beer Can Christmas Tree, the display has grown to include roadside display replicas of an open-air saloon and cafe

Written by Matt Joyce | Updated: October 6, 2022 | Filed Under: A Piece of TexasCultureThings to DoTRAVELTravel News 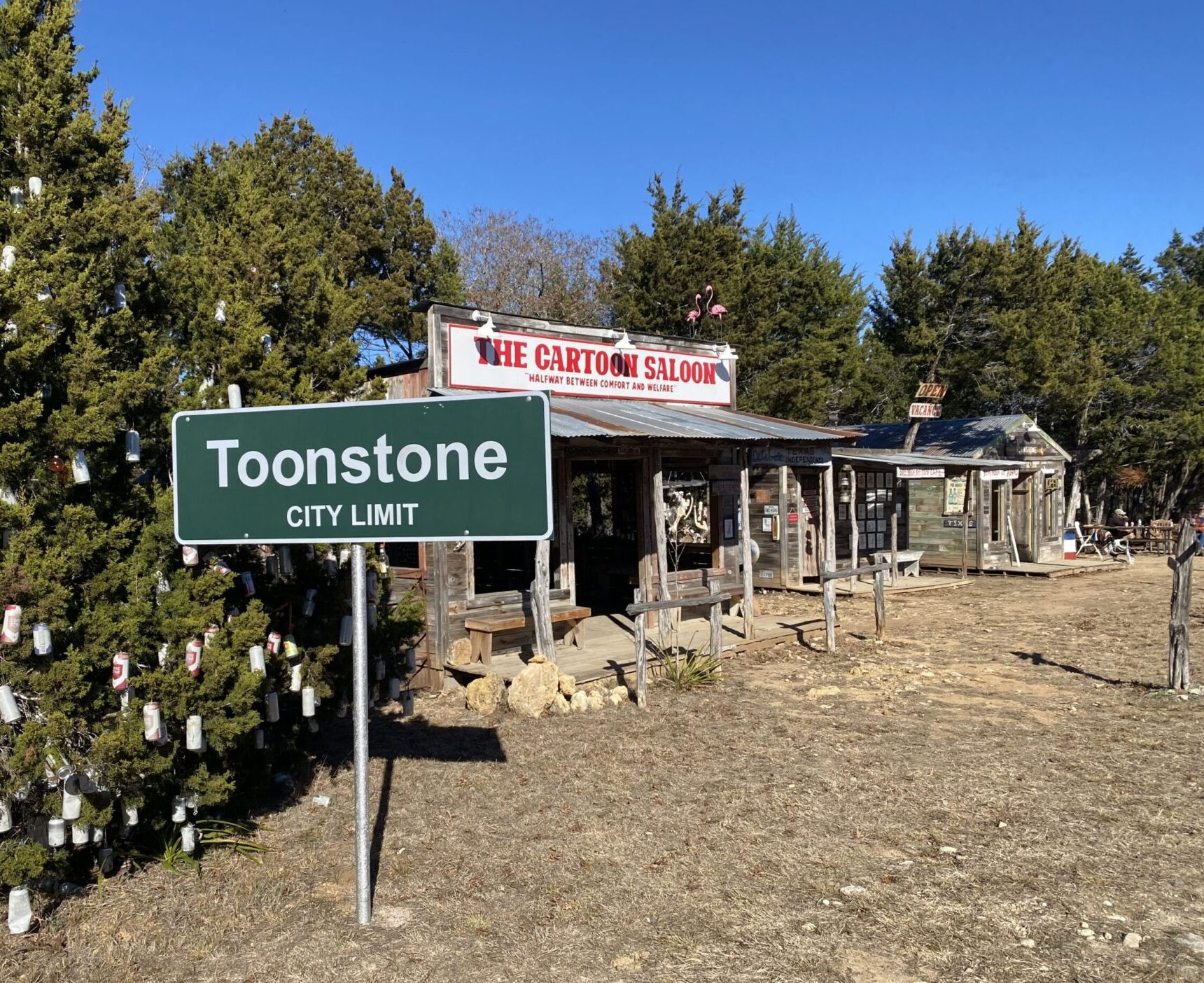 Cartoonist J.P. Rankin built the Cartoon Saloon with friends to create a place to hang out and build community. Photo by Jacqueline Knox

It all started with a bunch of empty Lone Star Beer cans. In December 2013, J.P. Rankin, aka “the Cartoon Cowboy, cartoonist extraordinaire” and his daughter Ammeke Herrera took the cans and hung them on a cedar tree near the road on Rankin’s property on the outskirts of Comfort, calling it the “Lone Star Beer Christmas Tree.”

Five years later, Rankin was hanging out at The Cocky Rooster Bar in Comfort with three friends, Paul Denmark, Brian Coyle, and Marc “Biscuit” Lafrenais, discussing how to spend the next day—Texas Independence Day. They decided to gather at Rankins’s Christmas tree, handing out free beer and hot dogs. They got a cooler full of beer, fired up a grill, and placed a “Free Beer and Hot Dogs” sign along Farm to Market Road 473. Roughly 40 people stopped by the impromptu Texas Independence Day party.

After that, the three decided to turn that area of Rankin’s property into a full-time hangout, and built The Cartoon Saloon, a walk-in photo opp about 5 miles east of downtown Comfort. Not an actual saloon—the place sells nothing—the building “really owns itself,” Rankin says. People can visit at any time since it’s never technically open, yet never closed. Regulars tend to congregate there on Saturdays.

The building is full of signed beer cans, license plates, and trinkets that visitors have left behind. “People like to leave a part of themselves when they come in,” Coyle remarks. “It has taken on a life of its own.”

Lafrenais even wrote a song about the special spot—”The Cartoon Saloon Song”—which you can watch on YouTube.

Many of the relics in the open-air saloon have personal meaning. A sculpture of a horse and a signed Schlitz can honor one of Rankin’s friends who passed away.

The property also has two other roadside structures: A lean-to called Sal Men Nello’s Café (not an actual cafe) showcases some of Rankin’s cartoons; another wooden building features more cartoons and a fridge that sometimes has beer. The property also doubles as a makeshift wedding venue. Rankin says the Cartoon Saloon has hosted seven weddings, one of which Rankin officiated as Elvis.

“Our slogan is ‘Do More Better,’” Rankin says. “We are giving back to the community by giving people a place to stop.”

The Cartoon Saloon regulars are working to fulfill the slogan this year, building food pantry boxes, and installing on the property a lending library and a collection spot for toy donations for those in need. “We take and take,” Rankin comments. “I think we should give, and that’s what we are trying to do.”