Written by: Cathryn A. Hoyt 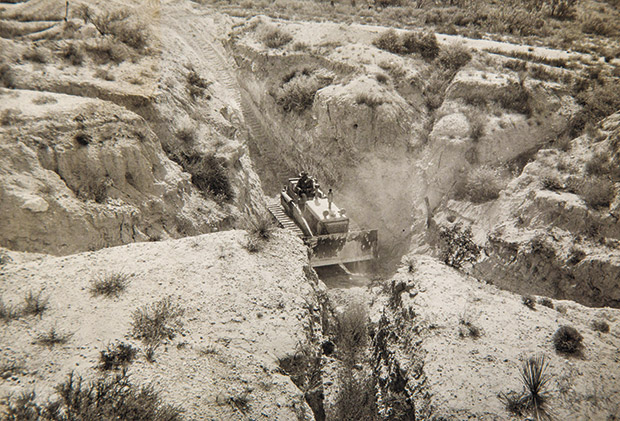 A meteor streaks across the pre-dawn sky, its long tail sparkling. Perhaps Chicken Little is right. The sky is falling. But what are the chances that a killer meteorite might land in West Texas? The chances are low, but it has happened before.

To learn more about that catastrophic occasion some 63,000 years ago, I head for the second-largest meteor crater in the United States. About 10 miles west of Odessa, I exit off Interstate 20 and follow Meteor Crater Road as it threads between tumbleweed-choked fence lines and pump jacks en route to the Odessa Meteor Crater Museum.

Perched on the edge of the 550-foot diameter crater, the museum tells the story of its namesake crater and offers fascinating exhibits about meteorites from around the world. Posters line a wall of the one-room museum, showing where meteors come from, where they’ve struck the earth, and the dramatic consequences. A small gift shop—including necklaces with meteorite fragments—occupies one corner of the room, while a flat-screen monitor showing educational videos occupies the other.

The Odessa meteor crater site has attracted attention at least since the 1890s, when a rancher found a strange fist-sized rock in his pasture. Thinking it was a sample of iron ore, he gave the rock to a geologist from Baltimore who sent it to the Smithsonian Institution for testing. The piece was 91 percent iron and contained the classic black fusion crust and crystalline structure of a meteorite.

At first, no one gave much thought to “the great depression” where the meteorite was found, despite the upturned limestone blocks lining the rim of the eight-foot-deep hole. Standing on the lip of the crater, I marvel at the force that was necessary to dislodge these blocks, some of them as large as desks, from 22 feet below the surface to where they stand now.

It happened, scientists believe, when a superheated lump of iron and nickel crashed through the atmosphere and shattered into a swarm of meteors. Moving at up to 27,000 miles per hour, the meteors compressed and warmed the air as they fell from the sky. One chunk, perhaps as large as 32 feet in diameter, never made it to earth. Just before impact, the chunk exploded, throwing a shower of small meteorites in a two-mile radius and creating the Odessa meteor crater. (The blast actually created five craters, which are collectively known as the Odessa Meteor Crater.)Shock waves threw dirt and rock high into the air, peeled limestone back, and fractured deeper layers of sandstone into rock flour. The blast sparked fires, created a rush of 1,500-mph winds, and instantly killed any plants or animals within 2,000 feet.

Interest in the Odessa meteor crater accelerated in 1926, when geologist D.M. Barringer Jr. read a paper describing the meteorite and the curious hole near Odessa. The son of a Philadelphia mining engineer who identified a huge meteor crater in Arizona,
Barringer was intrigued. Could this be another meteor crater? Barringer visited the site and immediately recognized the upturned rocks encircling the depression, the iron shale, and the material blown out of the crater and scattered across the surface—all features indicating that the hole was special. He was sure it was a meteor crater.

It wasn’t until 1939, however, that geologists from the University of Texas arrived with a crew of Works Progress Administration men to excavate the crater. They believed that the meteorite was buried deep below ground. They set out to dig a shaft down to the main body of the meteorite, then dig a lateral tunnel to provide a view of the meteorite in its subterranean resting place.

The WPA workers dug a 165-foot-deep shaft into the center of the crater, turning up tiny fragments of meteorites along the way but ultimately discovering that there was no big meteorite. The impenetrable layer that geologists thought was the main meteorite turned out to be a dense layer of bedrock. In 1941, the project ended abruptly as the WPA workforce was called to fight in World War II.

Located on land owned by the Texas & Pacific Railroad, the shaft lay abandoned, a place for local teenagers to explore. “When I was in high school, we’d go out there at night with a mesquite stick and light it and climb down,” says Tom Rodman, who grew up on a neighboring ranch and is now an attorney in Odessa.

Rodman’s boyhood adventures sparked a lasting interest in meteors and prompted him to lead efforts to preserve the site, raising funds to build a small museum on the property. “A lot of people said, ‘We’ve got this crater, we ought to do something with it,’” Rodman recalls. Rodman also donated a collection of meteorites and put together exhibits for the museum. The museum opened in 1965, the same year the National Park Service designated the crater site a National Natural Landmark. The railroad donated the crater land to Ector County in 1979.

The remote museum proved to be a target for vandalism and thieves, but Rodman didn’t give up. He eventually convinced the late state Representative Buddy West of Odessa to provide state funding to build the current museum, which opened in 2002 and attracts thousands of visitors each year.

I follow the quarter-mile-long asphalt trail down into the crater, pausing to read the interpretive signs. Over thousands of years, sand and dirt have filled the crater to within about eight feet of the surrounding ground. Mesquite, thin patches of grass, and yucca plants cover the crater floor.

As I head back up the trail, I stop to visit with a family making its way to the crater. The children bubble with excitement. Why, I ask, are they interested in this place? “Because,” the little girl says, “It’s from outer space.”