The Artistic Enclave of Salado 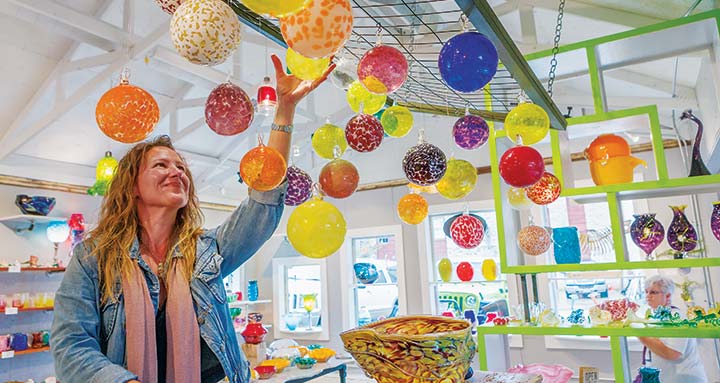 Sitting in the light-washed front room of his Salado gallery, artist Ronnie Wells shapes a small clay sculpture of two men carving a duck decoy, a model for a future bronze. In an adjacent room, his wife motions her hand as if to say, “It’s okay. Go on in.”

Neither annoyed nor flustered, Ronnie sets aside a scraper he uses for shaving the clay and indulges me in conversation, discussing his portfolio of dynamic portrayals of wildlife in oils, watercolor, and sculpture. He describes what it was like to see a majestic elk in the parking lot of a motel in the Rocky Mountains, a twist of fate that provided inspiration for a future work.

A block away, traffic hurtles through this Central Texas community on Interstate 35 between Temple and Austin. But there are plenty of reasons to slow down and exit onto Salado’s Main Street. The town of about 2,100 residents is home to more than 30 shops and galleries, many featuring Texas artists, as well as a community of engaging artists and craftsmen who create and display their works around town.

Larry Prellop, who opened Prellop Fine Art Gallery on Main Street in 1995, has watched Salado’s art scene evolve over the decades. An accomplished landscape and bluebonnet painter, Prellop also hosts workshops for aspiring artists and invites visitors to observe him at his easel. “So many of us actually work on site so customers can see the work in progress,” he says of Salado’s artists. “They love to watch an artist at work.”

Besides Prellop’s own award-winning paintings, his gallery sells the works of more than 30 landscape and Western artists, including the nationally celebrated Hill Country painter G. Harvey; the bronzes of Troy Kelley, who was commissioned to do a memorial at Fort Hood for the victims of the 2009 mass shootings; and the delicate botanical sculptures of Charles Allen.

Nearby, at Griffith Fine Art Gallery, Kay Griffith shows the works of roughly 20 artists and paints shimmering abstracts that have earned her an international reputation. “What you are going to find is the work here in Salado has a very high quality to it and is on par with anywhere in the country,” Griffith says.

Across the Main Street bridge spanning Salado Creek, Mud Pies Pottery greets visitors with a sampling from one of 45 flavors of fudge. Owner Titia Arledge Califano is best known for the cookware, bowls, table settings, and accessories she has crafted here for more than two decades, but the fudge is a sweet treat for visitors and has a history all its own.

For years, one of Salado’s big attractions was a place called Sir Wigglesworth, a “destination” store with room after room of crafts, decorations, clothing, tableware, folk art, and yes, fudge. When the store closed in 2003, Califano purchased the fudge-making pot, display counter, Sir Wigglesworth’s bunny-rabbit signage, and 15 recipes. The acquisition was providential, Califano believes: The fudge draws in potential new customers for her signature pottery, as well as extra cash flow.

Califano’s studio, including a kiln and pottery wheel, adjoins the retail area. The studio “is my second home—the heart of the business,” she says. It has become “a gathering place for all who seek a smile, a hug or two, warm soup on cold days, a respite for the weary to brighten their day—whether a personal friend or a customer who has no idea what they are walking into!”

Salado offers ample provisions for those who wish to spend an entire weekend. Johnny’s Steaks & Barbecue serves tasty chicken-fried steak with a crunchy crust, and hosts Texas country singers like Jason Boland and Sonny LaRue at Johnny’s Outback, an outdoor music venue next door. The Range at the Barton House serves upscale fare, including a grilled center-cut filet of beef with cilantro cream sauce, in an 1866 limestone house. A few blocks away, the historical setting extends to the Inn on the Creek, a lodging that includes a Victorian mansion that was built in Cameron in 1882 and then moved to the bank of Salado Creek and restored in 1986.

Welcoming the public is an integral part of the business plan at Salado Glassworks, located a couple of blocks off Main Street in a former cotton gin. “We really like it when folks come off the highway to watch us blow glass,” says owner Gail Allard, who learned glassblowing as an apprentice to Bob Rynearson in nearby Temple. “We kind of goof around and engage those who are watching and tell them how this works.”

In addition, Allard organizes special events, including an annual Blow Your Own Ornament workshop during the Christmas season. Participants select the colors of their ornament and observe from indoor bleachers “while we are handling the dangerous part—the hot glass,” Allard says. Then, the customer blows on a hose connected to a pipe and forms a tree decoration, no two of which are alike. The ornaments harden overnight in an oven, and then are signed and dated for pick-up the next day. The glassworks created close to 2,000 Christmas ornaments for customers in 2014, Allard says.

Allard’s blown-glass artistry ranges from bowls to wall hangings, vases, and various sculptural shapes, some of which are ethereal or even mystical. “That’s where the passion is,” he says. “It might be something like I’m driving down the highway and see a shape, or it’s in my mind’s eye to try something new.”

Larger-than-life shapes populate the Salado Sculpture Garden in a three-acre, wooded plot on the town’s north side. Opened in October 2011, the garden displays loaned pieces on a rotating basis—roughly 25 at any given time—some of which are for sale. Unattended, the garden opens from 9 a.m. to 5 p.m. daily and provides a tranquil place for a picnic or meditation on one of its benches or picnic tables.

The first piece purchased from the garden was a glass bird made by Melissa Paxton, who works in a two-story building next door with her husband, Joe Price, at Glass River Design. They moved their business from Arizona to Salado in 2002 and have a nationwide following for their “functional art”—customized glass sinks, windows, doors, tabletops, and accessories that are sand-carved, inlaid with metal, and colored in a beautiful variety. Paxton coordinates the design phase, and Price, a former contractor, handles the construction and installation.

One of Glass River Designs’ latest projects is the “Salado Gateway,” two dramatic structures 30 feet long and 20 feet high with LED lighting that will be placed at each end of town when the years-long overhaul of Interstate 35 through town wraps up in late 2015 or early 2016. The gateways depict agaves in bloom—“one of the more majestic plants that grow in this area,” says Price. The “blooms” on each piece are actually more than 100 glass bulbs blown by none other than Gail Allard.

On the rebound from the economic recession and 2010’s floods on the normally placid Salado Creek, and with the overhaul of I-35 nearing completion, Salado’s artists and shops are poised for an upturn and happy to interact with visitors interested in their craft. As Prellop says, “We have used the slogan ‘Artfully Yours’ and ‘The Best Art Town in Texas’ for a while. I think it’s catching on.”