All in on Alpine 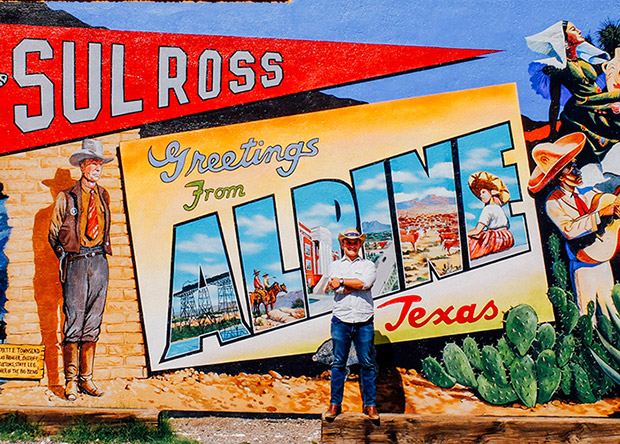 While Texas may not have any alpine skiing or alpine snowshoeing, it has alpine trippin’, Texas-style.  This West Texas town is unlike any other with an unusual mix of grit, funk, and class right in the middle of the Chihuahuan Desert. All this and more makes this “hub of the Big Bend” well-worth the trip.

9:00 a.m. The day was new, so I headed to PLAINE for my morning joe. This local coffee shop is a meeting ground for locals from all walks of life. I joined ranchers, bankers, and artists as we caffeinated for the day. I also grabbed a donut for an extra sugar boost.

10:00 a.m. Before the sun got too hot, I headed to Sul Ross State University to hit the books and hike a mountain at the same time. And after lugging myself about a mile up the trail, I arrived at the top of Hancock Hill and found a metal desk overlooking a stunning vista. Students hauled this desk up the mountain in the 1980s, and it gives new meaning to the term “higher education.”

12:00 p.m. I decided to explore campus and found a number of attractions hidden among its classic architecture. There was a cactus garden, and a statue of soldier and statesman Sul Ross himself, with countless coins left at his feet by students hoping for a little extra exam luck. But best of all was the Museum of the Big Bend, which presents exhibits covering topics as diverse as flying reptiles and native tribes to the creation of Big Bend National Park. I left feeling even more inspired to travel every inch of this rugged land.

1:30 p.m. It was time to take my taste buds to a new frontier, so I headed to Cow Dog, which serves up hot dogs that break the traditional flavor mold. The menu read like a combination of a dozen different restaurants, with flavors from India, Thailand, Mexico, and Texas. I ordered a “Hangover” with chili, cheese, and Fritos, along with an “El Pastor” with grilled pineapple and lime-spiked mayonnaise.

2:30 p.m. I set off on foot to cruise through downtown and take in the historic buildings, including the Holland Hotel, which feels as if cattle barons should still be hanging out in the lobby. There were also a number of colorful murals that mixed well with the local artwork at galleries and shops like Front Street Books.

4:00 p.m. Next up, I headed to Murphy Street Raspa, which makes Mexican-style snow cones inside an old general store. The bright colors and lack of air-conditioning made me feel like I’d truly crossed the border. So in the spirit of Mexico, I ordered a mango snow cone with chamoy sauce. Ay, caramba, it was good!

5:30 p.m. Feeling the call of the mountains, I headed west to see the Paisano Pass Volcano. I missed the actual eruption by 30 million years or so, but the surrounding mountains still have evidence of volcanic activity. Interpretive displays here explain its significance to the area’s geology.

7:00 p.m. Hungry once again, I stepped into Reata Restaurant, which was named for the ranch in the 1956 movie Giant, filmed in nearby Marfa. This restaurant’s mix of steaks, Southwestern cuisine, and comfort food blazes new trails in the category of upscale cowboy cooking. My pepper-crusted tenderloin was simply perfect, and the chocolate tamale made this meal one for the record books.

9:00 p.m. To close out the day like a local, it was time for Railroad Blues, a honky-tonk, bar, and self-proclaimed “tourist trap”—although I’m pretty sure I was the only outsider in the place. I ordered a Big Bend Brewing Co. beer and mingled with other patrons around the outdoor campfire.

As a local troubadour strummed a guitar, I didn’t want the day to end. It was one that had taken me to the tops of mountains, to the frontiers of flavors, and into the rich legacies of the Big Bend. So whether you follow my footsteps or forge your own path, I hope to see you on the road.