Antlers Up in Abilene with Chet Garner 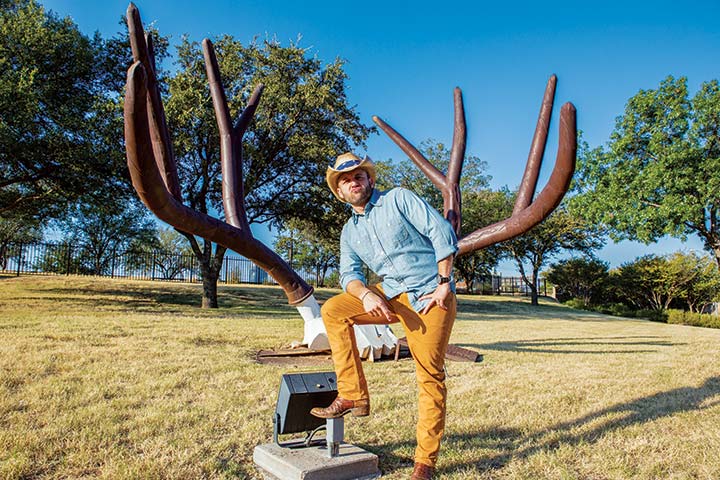 North of the Hill Country, but south of the Panhandle; west of North Texas, but east of West Texas, is a region that can only be described as “Big Country.” It’s a land of rugged prairies and epic stories as legendary as Texas itself. I headed to the heart of this region to explore its biggest and most fabled city—Abilene.

9:00 a.m. For the lore of the area’s past, I headed to Frontier Texas! With historical artifacts carefully placed next to state-of-the-art holograms, this complex summarized the frontier experience better than any museum I’ve ever visited. I felt transported to the time when native tribes, settlers, and bison by the millions converged on the open prairie. The 360-degree theater had my head spinning from all I learned about Texas’ Wild West history.

11:00 a.m. Inspired to see remnants of the real frontier, I headed north of town to Fort Phantom Hill. For decades, U.S. soldiers occupied this site and helped pave the way for westward expansion into unsettled parts of Texas. Today, the crumbling chimneys and abandoned roads hint at a time when this fort bustled with activity. I could almost hear Reveille sounding from a distant bugle.

12:00 p.m. Back in town, the vast sense of the frontier gave way to the kookiness of modern art as I passed sculptures of ridiculousness occupying Abilene’s open parks. There were deer antlers bigger than buses, a giant flamingo with sunglasses, and a bison to climb upon. It seems the Texas heat has made some locals a bit crazy, and I love it.

12:30 p.m. For art in edible form, I made my way to Abi-Haus for hand-crafted food rivaling that of much bigger cities. After reading the mouthwatering menu on a massive chalkboard, I started with some homemade sausage and followed it up with a house-smoked salmon BLT. And just when I thought my meal couldn’t get better, the waiter brought out warm beignets drizzled with honey (usually served only at dinner). My eyes settled safely in the back of my head.

1:30 p.m. Still on an artistic kick, I headed to The National Center for Children’s Illustrated Literature (NCCIL, or “nickel” for short) to indulge my inner kid looking at vivid illustrations that tackle life’s greatest challenges and mysteries. I walked across the street to the Storybook Sculpture Garden and found Dr. Seuss characters I remembered from childhood, including the Lorax, Horton, and even the Grinch. I sure do love Abilene, Sam-I-Am.

2:30 p.m. Not all of Abilene’s quirky animals are made of bronze, which I quickly discovered at the Abilene Zoo. The lions and tigers and bears were out in full force, but my unexpected favorite thing to do was toss fish food into the cavernous mouths of the carp inhabiting the zoo’s lake.

5:00 p.m. In an effort to spoil my dinner, I headed to Candies by Vletas, which has been in business for more than 100 years and now makes its signature pralines, brittle, and chocolates in a renovated train depot. I could have easily filled up on samples, but instead I grabbed a couple of bags for future road trips.

6:00 p.m. Undeterred from finding dinner, I drove to local steakhouse Lytle Land and Cattle Co. While owner Sharon Riley also has a barbecue joint bearing her name, this steakhouse is the best place for big beef cooked to perfection on a mesquite grill. My “Abilenian” rib-eye barely fit on my plate, but I somehow managed to fit it in my stomach. I didn’t want to waste even a nibble.

The story of Abilene seamlessly blends its Wild West past with a lively present. It’s full of stories, artwork, and meals as big as Texas is wide, confirming that there are big times to be had in Big Country. So whether you follow my footsteps or forge your own path, I hope to see you on the road.