A trip fit for a king 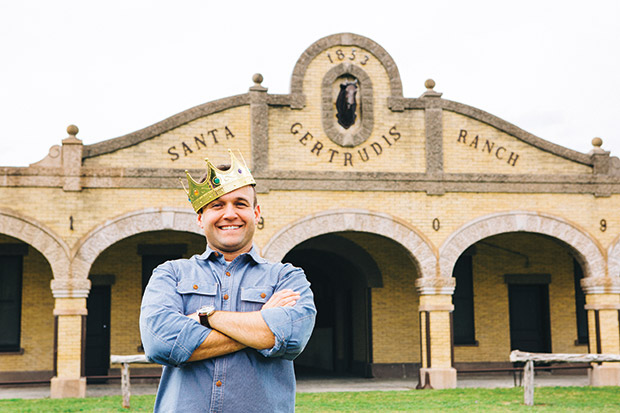 Typically, a kingdom can be measured in its vast stashes of gold and millions of faithful subjects. But here in Texas, a grand kingdom needs only acres upon acres of beautiful land and a seemingly endless supply of cattle. And that’s exactly what I found in the South Texas town of Kingsville.

9:00 a.m.: I cruised into downtown Kingsville, which consists of one long street bookended by the Kleberg County Courthouse and the immaculate former Henrietta King High School. I found historic architecture aplenty, and in searching for a king-size breakfast, I was directed to Harrel’s Kingsville Pharmacy. Since a “King Ranch Casserole Omelet” isn’t a real thing, I instead feasted on a plate of savory migas and tortillas.

10:00 a.m.: Along the historic strip, I found a selection of distinctive shops and crossed the street to channel my inner cowboy at the King Ranch Saddle Shop. This place is known worldwide for its
authentic leather goods, each one handcrafted and bearing the famous “Running W” brand. Deciding it is probably best to own a horse before purchasing a saddle, I happily opted for a leather wallet.

11:00 a.m.: With a trip to the legendary King Ranch high on my to-do list, I hopped on a guided History Tour to see part of this massive 825,000-acre spread. King Ranch was established in 1853 and now spans across four separate divisions in South Texas. We visited sites such as the iconic Carriage House and Quarter Horse cemetery. We saw pastures filled with King Ranch Santa Gertrudis cattle, and then toured the Weaver’s Cottage to speak with one of the Kineños (or “King’s men”), descendants of the original Mexican families who followed Captain King to Texas and have worked the ranch for generations.

2:00 p.m.: Marveling at this kingdom of cattle made me eager to learn more about the Texas King himself, so back in town, I visited the King Ranch Museum and found artifacts and pictures depicting Captain Richard King’s life and legacy. I was interested to learn that the treasures of King Ranch lie not only in its bountiful cattle, but also in oil, turfgrass, hunting, and the ranch’s natural wonders, as it’s home to deer, alligators, and some 300 species of birds.

4:00 p.m.: Having missed the ranch’s birding tour of the day, I drove to Dick Kleberg Park. With binoculars in hand, I set out on a small trail surrounding a creek. Almost immediately, I spotted a flash of green swoop into a nearby tree. I crept closer and discovered the brilliant green jay. Its northern range extends to southern Texas, but the bird is so colorful I felt like I’d stepped into a rain forest.

5:30 p.m.: Though I had spent the afternoon in nature, one animal I had sadly missed was the javelina. Luckily, I knew just the place to spot some javelina fans—at Texas A&M University-Kingsville, whose mascot is the hairy, brown peccary. I enjoyed exploring the campus with its Spanish Mission Revival-style architecture and red-tile roofs.

6:30 p.m.: Ready for dinner, I made my way to college hangout Young’s Pizza, where the sandwiches reign supreme. I ordered a fan favorite—the “Texicali,” with thin steak on a sesame-seed bun, grilled with onions and mushrooms and topped with Monterey Jack and jalapeño. The pizza may be delicious here, but I’ll never know because I’m ordering the Texicali from now on.

It turns out that what Captain King started years ago has now flourished into a full-blown Texas kingdom that extends way beyond the borders of the iconic ranch. It’s a place where all visitors can dine like a king, discover majestic nature, and explore the richest of histories. So whether you follow my footsteps or forge your own path, I hope to see you on the road.