Beachin’ It in West Texas 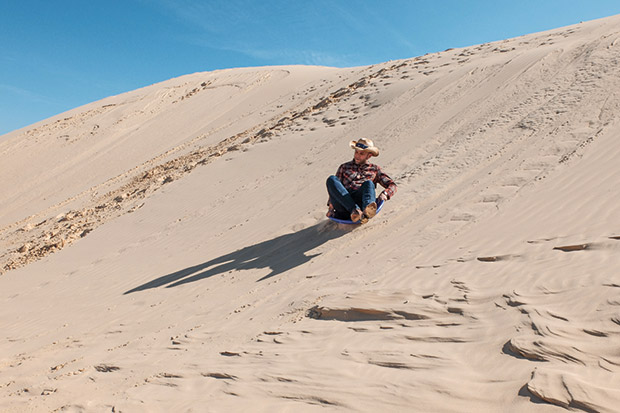 There are times when the highways of West Texas seem to go on forever. Small towns and rest stops flash by with seemingly little to differentiate one from another. However, each highway exit offers a call to discover something distinctive, which is exactly what happened when I pulled off into the desert oasis of Monahans.

Contact the Monahans Chamber of Commerce at 432/943-2187. More on Monahans Sandhills State Park at www.tpwd.texas.gov.

8:00 a.m. As I pondered the endless blue sky and brown earth that surrounded me, I was overcome with a single thought: “Where am I gonna find breakfast?” Luckily, I found Angela’s Restaurant, where I gobbled down a tasty breakfast burrito stuffed with chorizo and egg.

9:15 a.m. With a full belly, I headed to Monahans Sandhills State Park, an expanse of the Chihuahuan Desert that looks more like the African Sahara. I crested the first hill to gaze on layers of sand dunes stretching as far as the eyes can see. At first glance, I understood why some call the landscape “Texas’ largest beach without an ocean.” I spotted the highest peak in sight (about 30 feet tall) and grabbed the sand disc I had rented at the front desk. Trudging my way to the dune-top, I took a deep breath and launched myself down the hill on my plastic disc of speed. After a few good rides, I hiked back to my car and dumped an entire dune out of my boots.

1:00 p.m. Nothing suits a West Texas day like a plate of West Texas barbecue. I walked the line at local favorite Pappy’s Bar-B-Q and filled my plate with smoked meat and sides. My unexpected favorite was the chicken, flavored with just the right amounts of spice and smoke. Mmm!

2:15 p.m. As I drove through town, I could feel the authentic grit of West Texas seeping into my soul. The vintage storefronts and weathered motels along the old highway whispered the story of Monahans’ history and what it’s like to ride the boom-bust cycle of oil in the Permian Basin.

3:00 p.m. Attracted by a sign reading “Million Barrel Museum,” I found the Ward County Museum complex, comprised of historic buildings and pieces of farm equipment staged around a giant concrete pit originally created to hold a million barrels of “Texas-T.” Built in 1928, the tank leaked and, because of high taxes on stored oil, was abandoned within a couple of years. In 1958, it served as a water park for one day because—well—it leaked again. I wandered into one building and found a museum dedicated to the “Rattlesnake Bomber Base” of nearby Pyote (pronounced Pie-yote), which served as a training ground for U.S. bomber crews during World War II. It earned its nickname from the thousands of rattlesnakes uncovered when it was constructed in 1942.

5:30 p.m. While the base is gone, that didn’t stop me from driving 15 miles west along Interstate 20 to Pyote. From the highway I could barely make out the walls of the old main hangar, which once held B-17s and B-29s. I was tempted to walk through the field for a closer look; however, I remembered the base’s nickname and quickly decided to stick to the road.

7:00 p.m. Back in Monahans, I found the Jazz Café, housed in a renovat-ed theater and focused on bringing big-city flavors to small-town Texas. While the smooth sounds of jazz music tickled my ears, the sultry flavors of a seared-to-perfection rib-eye danced on my tongue.

I cut open the “dessert of the day”—a dumpling with cinnamon caramel sauce—to reveal an entire apple hidden inside its flaky crust. I thought to myself, “Ain’t that just like day tripping? Sometimes you never know what you’ll find inside a town until you jump in and start exploring.” So whether you follow my footsteps or forge your own path, I hope to see you on the road.