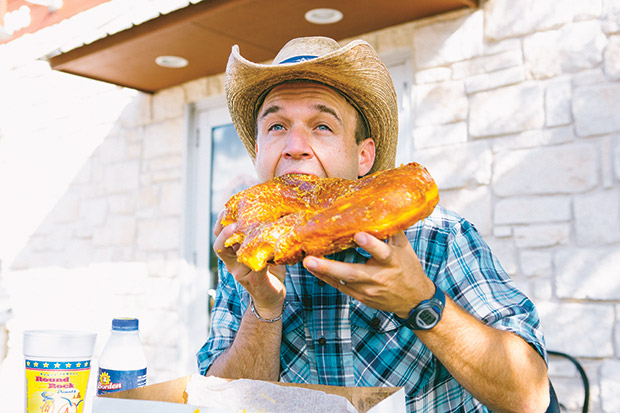 When visiting Texas’ capital city, some may be tempted to spend all of their time exploring within the confines of the famous Austin city limits. But those who know better will roll up Interstate 35 to visit a different Texas town where the history, sports, and donuts will rock your socks.

8:00 a.m. Eating breakfast at Round Rock Donuts is a mandatory activity for tourists and locals alike. With the drive-through line stretching down the block, I walked inside to the heavenly smell of hot grease and warm glaze. While the donuts’ signature orange-yellow color may be hard to fathom, their popularity is not. And my Texas-size appetite called for nothing short of the “Texas Donut,” which is cut with a custom bucket and fills an entire box.

9:00 a.m. I headed to Main Street, where shops and restaurants now occupy the historic buildings. It was on this street in 1878 that famed outlaw Sam Bass met his end in a blaze of glory and gunfire. Bass is buried in Round Rock Cemetery northwest of downtown.

10:00 a.m. To explore a more recent story, I headed to Hairy Man Road. This curvy, woodsy passage along Brushy Creek is named for a fictional old hermit who hated trespassers so much that he would hide in the trees and jump out to scare them. A local boy reportedly created the hairy man tale to scare his sisters, but some believe he still haunts the road. Luckily, I didn’t see anything too frighten-ing in the daylight, but I might think twice about returning at night.

11:00 a.m. I followed Brushy Creek to Chisholm Trail Road and found sculptures memorializing the cattle drives and pioneers who settled this area. To my amazement, I found the actual “round rock,” a circular stone rising out of the creek bed that was once used by cowboys and caravans as a geographical marker on the Chisholm Trail. As I forged the creek to stand on top, I found deep grooves in the limestone creek bottom formed by rock-loaded carts that once made the crossing.

12:30 p.m. For lunch, I headed to The Blind Squirrel Sandwiches, which are neither made by squirrels nor with squirrel meat. However, the sandwiches are far from ordinary with delicious twists on old classics. I opted for “The Paris, Texas,” a confit of beef brisket on Texas toast that put a French spin on a Lone Star original. It was fantastic, but I truly went nuts over the peanut-butter-bacon cookie I had for dessert.

2:00 p.m. Things got sticky as I headed to Round Rock Honey for one of the bottling and tasting tours (Saturdays only). Educating me on all things honey, the tour had me buzzing like a bee. Best of all was the tasting session featuring honeys from across the globe, each tasting drastically different based on the diet of the bees.

4:00 p.m. I stopped at Old Settlers Park and explored field after field for everything from baseball to kiteflying to cricket, making it clear why this town is the official “Sports Capital of Texas.”  Prepared for the occasion, I grabbed my bag of discs and hit the 18-hole disc golf course that weaves around the park.

6:30 p.m. At Dell Diamond, home of the Round Rock Express minor league baseball team, I joined the crowd on the grassy hill in left field and grubbed down on a Big Kahuna hot dog topped with pineapple mustard, mango salsa, and avocado. It was certainly a non-traditional meal for America’s most traditional pastime.

As the fans stood up for the seventh-inning stretch, I reflected on my “home run” of a day trip. Next time you get the chance to visit the area, don’t roll past Round Rock, because you’ll miss a rockin’ good time. So whether you follow my footsteps or forge your own path, I hope to see you on the road.