Written by: Daniel Blue Tyx
Photos by: Will van Overbeek

Written by Art Williams, Photographs by Will van Overbeek | From the October 2017 issue | Updated: September 19, 2017 | Filed Under: TRAVEL 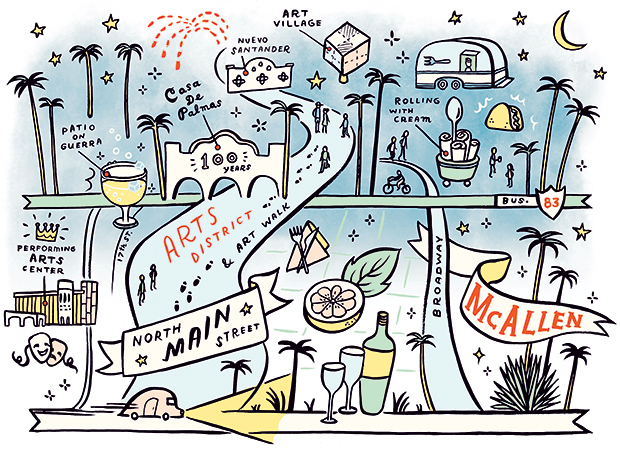 For many fellow Texans from “up north,” the Rio Grande Valley might be synonymous with birds, beaches, and grapefruit groves. To be sure, the Valley remains a bird-lover’s paradise, the beach still beckons, and the citrus is the sweetest anywhere. But with the region’s rapid growth and a nascent cultural boom, that list should also properly include art galleries, fine dining, and world-class performances.

For McAllen tourism information, call the McAllen Convention and Visitors Bureau at 956-682-2871.

Nowhere is this truer than McAllen; the McAllen-Edinburg-Mission area recently became the fifth-largest metro area in the state. Thanks to the work of a visionary group of artists, entrepreneurs, and local officials, the city now boasts a vibrant arts district, a fast-expanding culinary scene, and a striking new performing arts center. Altogether, this renaissance offers visitors a distinctive Valley twist on an urban weekend on the town.

When I first moved to McAllen more than a decade ago, the downtown area was picturesque but in need of a little TLC. Its streets were dotted with historic Spanish Colonial Revival buildings in varying states of repair. Aside from a restaurant or two, not much was going on after business hours in what is now the lively Arts District. Little did I know that the foundation was already being laid for Art Walk, a monthly gallery tour that would ultimately be the catalyst for the downtown revival in full flower today.

“The art scene was next to zero,” says painter and printmaker Reynaldo Santiago, an Art Walk co-founder. He moved to the Valley in 2003—the same year I did—from San Juan, Puerto Rico. “When we got here, we decided to do something for the entire community. Art should reach everybody because that’s how communities grow.”

One of the first Art Walk destinations was the Art House, a contemporary gallery co-founded by Santiago and Esteban Brown. Another stop was Nuevo Santander, a gallery specializing in art and antiques from the borderlands and the American West that was the first to open its doors downtown in 1998. “There wasn’t a lot here, but this was the oldest part of McAllen, and it had a lot of nostalgia for people,” says Becky Guerra, who co-owns the gallery with her husband, Che Guerra. “There was an ‘if you build it, they will come’ kind of thing.”

Over the years, the Art Walk grew from its initial six locations to 25 venues, mostly along Main Street. Eventually, the city officially christened the area the Arts District, which now includes the McAllen Creative Incubator, a campus of 20 artists’ studios offering a wealth of classes and workshops, and the Art Village, a complex of galleries and arts-related businesses down the street.

The downtown boom also benefited from the Main Street location of the venerable Casa De Palmas Renaissance McAllen Hotel, which will celebrate its 100th anniversary this New Year’s Eve. Operated by Marriott since 1991, the hotel was originally built to wow land prospectors checking out the nascent “Magic Valley.” It has remained the region’s premier accommodation ever since, hosting visiting dignitaries and celebrities from Marlon Brando and LBJ to Justin Bieber and Selena Gomez. Postcard-perfect twin bell towers, wrought-iron balconies, and a terracotta roof decorate the city landmark, and the Talavera-tiled pool is a perfect place for visitors to spend a lazy afternoon before heading out for a night on the town.

As the arts scene has taken off, a growing number of restaurants have begun catering to the arts crowd by offering creative menus that cross multiple cuisines and influences. One such culinary pioneer is chef Larry Delgado, who together with his wife, Jessica Delgado, converted an old photo studio into the airy and inviting House Wine & Bistro. The menu offers up Italian influenced dishes infused with local flavors such as the signature garlic lime shrimp, the seven-layer lasagna with brisket as a secret ingredient, and an unforgettable take on the Valley’s classic grapefruit pie. 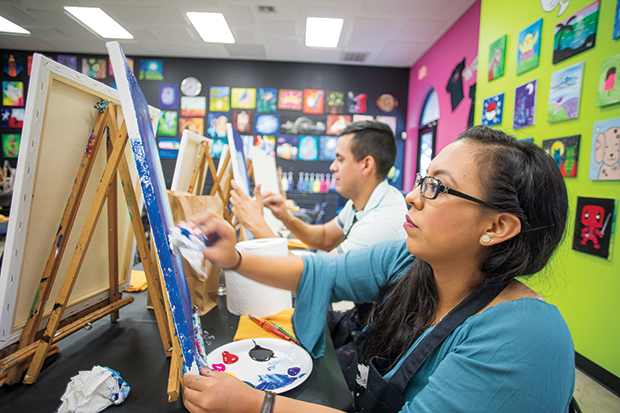 Encouraged by the enthusiastic reception to House Wine & Bistro, the Delgados opened a second restaurant, SALT New American Table, which flips the script by presenting classic Valley dishes with Asian and Italian flourishes. Another influential restaurant with its own distinctive take on Valley cuisine is the historic and elegant Patio on Guerra—also owned by Becky and Che Guerra—and housed in a 110-year-old building that has remained in the Guerra family since its inception. Other highlights include the retro-cool speakeasy-inspired Centennial Club and the leafy outdoor patios and large wine and craft beer selection of Infusions Eats & Drinks, Copper Moon Bar & Grill, and Roosevelt’s at 7.

For more casual fare, visitors can head down the street to the dozen or so food trucks at the McAllen Food Park. Lounging under strings of lights on folding chairs and tables, diners can sample eclectic menu items such as Korean Karnitas at Nuri, crazy good burgers at Se Vera Mal, and a wide assortment of classic Mexican street food, none better than the oversize flour-tortilla sincronizadas quesadillas and even larger fresh-fruit aguas frescas at Antojitos Beba. For dessert, there’s also hand-rolled ice cream at Rolling with Cream, where kids and adults alike love watching the cold treat prepared in front of their very eyes.

“Within the next few years you’ll hear more about the Valley because there’s some great culinary talent down here,” Delgado adds. “It’s just a matter of getting the word out and feeding more people.”

Whether it’s haute cuisine or straightforward street food, dinner downtown is the perfect overture to a night out at the remarkable new McAllen Performing Arts Center. Completed in November 2016, the MPAC isn’t just the latest addition to McAllen’s burgeoning arts scene: It’s the crown jewel.

Playing host to Broadway shows, symphony concerts, and Latin pop stars, the MPAC is worth visiting for the architecture alone. Patrons ascend the ground floor to one of the theater’s three upper levels via an angular staircase made of native mesquite. Upon arrival to the bougainvillea-inspired magenta seats, the most striking features are the zigzag arches of wooden panels overhead. Technically called “acoustic diffusers,” they’re made of Texas pecan and afford even the farthest-flung balcony seats an up-close listening experience. The proscenium eschews the traditional box in favor of a radically geometric design that’s further accented by a towering orchid-hued curtain.

The MPAC is in the Convention Center District, which also includes an adundance of nearby restaurants, five new hotels, a nearby shopping area, and Oval Park, the go-to place for a traditional Sunday afternoon paseo, or stroll in the park around the fountain and reflecting pool. While not technically downtown, it’s only a short distance from Main Street, and it offers one of eight stations for B-cycle, McAllen’s new bike share service. Other stations include Archer Park (off Main Street between the Casa De Palmas Hotel and the McAllen Food Park) as well as the 2nd Street Hike and Bike Trail, which connects popular destinations such as the adobe mansion and birding mecca Quinta Mazatlán, and Fireman’s Park, where visitors can rent kayaks, paddleboats, or the popular SUPs (stand-up paddleboards).

No matter what form of transportation you ultimately choose, the fact that it’s even possible to cycle between most McAllen destinations of note illustrates an important point. Although McAllen may dream of eventually rivaling Austin, Houston, or San Antonio as an urban destination, it’s still very much a small town at heart. And for this McAllenite, that’s a good thing. Venture down for a weekend-on-the-town, and you’re sure to find big-city amenities with small-town hospitality and distinctive north-of-the-border flare. One thing you won’t find? The big-city traffic.