Kids dig, deduce, and do at San Antonio’s DoSeum

Written by: Cynthia J. Drake
Photos by: Will van Overbeek

Written by Art Williams, Photographs by Will van Overbeek | From the October 2015 issue | Updated: September 16, 2015 | Filed Under: Family Travel 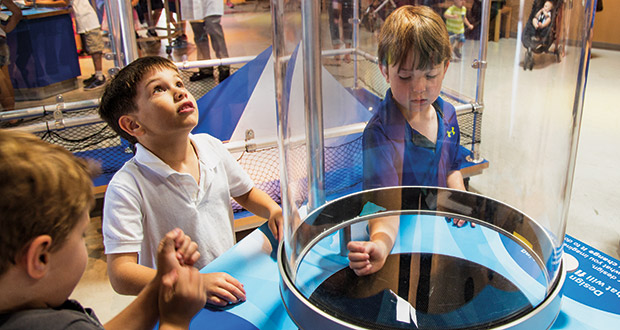 Now that my son August is on the cusp of turning five years old, he’s stumbled upon the concept of “infinity” to express a world that is becoming larger and more awe-inspiring by the day. “Can you count to infinity?” “The redwood trees—are they infinity big?”

I know that most young minds are insatiable for answers that only lead to more and more questions (and, occasionally, exhausted parents). So it was that my husband and I toted our inquisitive boy and his seven-month-old brother, Crosby, to check out the DoSeum, San Antonio’s new 104,000-square-foot children’s museum, which opened in June.

“Every exhibit is like an invitation for kids and their caregivers—it invites families to participate together and explore,” says the museum’s Cristina Noriega. “There are layers of complexity, and every single exhibit invites kids to dig deeper.”

The first stop on our visit, just to the left of the entrance, is a large projector screen with two strange, long-necked birds that move when you extend your hand in front of a motion-sensing camera. Open your fingers like a beak, and the bird pecks at a flower or some seeds. August is enraptured.

Nearby, the Spy Academy exhibit offers stations aimed at finding clues using math skills and deductive reasoning. Though the puzzles are designed for older children (ages seven to ten), some of the easier parts of the exhibit include dressing up in disguises, and “planting a bug” in a room of a house and guessing where the bug is hidden based on clues (like a flushing toilet). When the brain needs a little break to recharge, there are tunnels to climb through and speaking tubes to send secret messages.

“Tell me if you see a crocodile!” August calls from a speaker overhead. I growl back a response and he giggles.

We climb the musical staircase—each step chiming a different note—to the second floor and enter the crème de la crème for my four-year-old: the Innovation Station, which is filled with robotics and even a video game-style excavator—an excavator!—he can operate. He pushes buttons and pulls levers, he builds bridges, and he gleefully threatens to crash my robot.

Though he could spend all day in that space, I usher August over to Explore, an exhibit filled with maps, globes, and touch-screens conveying information about everything from natural resources to civics.

The Explore exhibits, like those throughout the DoSeum, tackle those major kid questions that come up on a daily basis and address them from multiple angles. Where do we live? Well, how about creating a skyline with little bricks using light and shadows? Then, listen to stories from other kids about their hometowns, including kids from Mexico City—home of the DoSeum’s sister museum, Papalote Museo del Niño—who wave to us via a live video monitor. How about trying your hand at dividing a city into districts, or fitting together a giant foam puzzle of the United States?

This multipronged approach is ideal not just for a range of ages, but for kids with different strengths and abilities, too. Some spaces are loud, while others are quiet (the Reading Lab nooks—awning-covered pods just big enough for a parent and child to fit—are wonderful). There are also places to climb, including an outdoors, wheelchair-accessible tree house designed by San Antonio resident Attie Jonker, whose tree houses have been featured on HGTV.

Also outside, kids can splash around at Water Works, which is filled with all manner of pumps and sprayers, dip their toes in the gentle, three-inch-deep Children’s Stream, climb across the rope bridges at Big Climb, or gather to hear a story perched on one of the hand-carved wooden chairs circling the Story Telling Tree.

In PowerBall Hall, a nod to the old San Antonio Children’s Museum’s most popular exhibit, children play and explore with balls, shooting them out of a cannon, cramming them into a pipeline, and cranking them through machines. Or, if you’re a seven-month-old, delighting in the simple joy of watching a ball roll away.

As we walk through the DoSeum and explore what feel like secret, magical spaces, I realize that the beauty of the museum is its simplicity. Though the latest touch-screen, bell-and-whistle technology is available to any modern-day museum, the DoSeum uses such technology wisely, and only in ways that encourage kids to do the heavy lifting with their brains.

In Little Town, an exhibit for six-month-olds to five-year-olds designed to spark role-playing and pretending (Be a veterinarian! Shop in a grocery store! Fly an airplane!), one of the areas August enjoys most consists of piling pieces of rubber mulch onto a moving conveyor belt. It’s such a simple idea, but such a satisfying way to approach big concepts—volume, texture, cause and effect, sharing.

“There’s so much interactivity and working with technology that is so important in preparing children for 21st-Century careers,” Noriega says. “But kids learn by doing—that’s why we call ourselves the DoSeum.”

We play together and explore for hours, and when it’s finally time to leave, we feel like we’ve hardly scratched the surface. I ask August for his overall review of the museum, and I already know what he’ll tell me.

“I infinity liked it, Mama,” he says.