The East Texas crossroads claims George Foreman and Bill Moyers, among others, as native sons 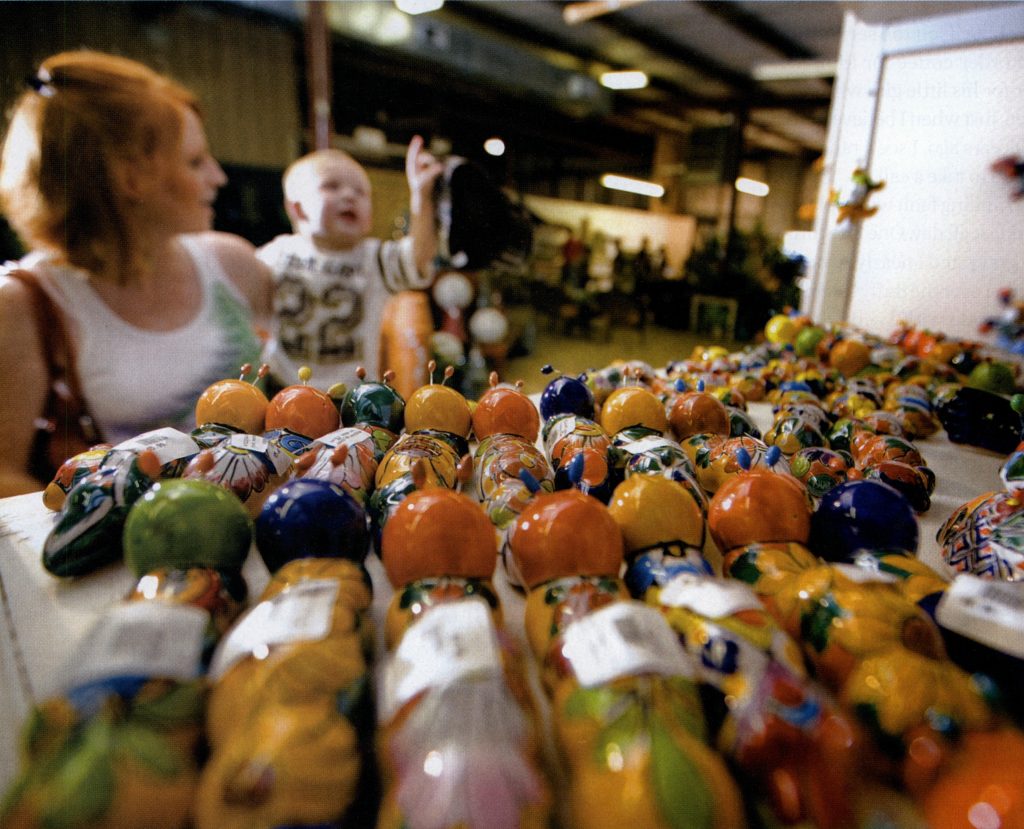 Fanciful centipedes vie for attention as Amy Alford shops with one of her twin sons, Aiden Neel, at Marshall Pottery.

The world’s problems are solved daily at Prospero’s Books in Marshall. At least that’s what Damon Falke tells me one morning as I peruse the new and used volumes on a recent visit to this appealing literary refuge tucked into a bright storefront in Marshall’s historic downtown. Falke, a poet, writ-er, and son of Prospero’s owner, Don Falke, helps run things. Besides offering the only bookstore in town, Prospero’s serves as a salon where regulars debate global issues. “Our bookstore, in its own small way, is a place for discussion and collegiality,” Falke says.

Of course, it’s also a place for book lovers, with sections dedicated to poetry, new releases, children’s books, and works by local authors. It also makes especially good coffee, and over a couple of cups, Falke and I talk at length about Marshall.

Originally settled in 1841, this East Texas town of about 25,000 once provided an important stop along stagecoach and railroad lines. Today, nearby Caddo Lake, the only natural lake in Texas, lures outdoor enthusiasts to the area.

If you use red clay pots for flowers and other plants, there’s a good chance they came from Marshall Pottery, in business since 1895. Touring the 100,000-square-foot facility and its three-acre pottery yard, you’ll find pots as tiny as thimbles and some too big to fit through your front door. The historic operation specializes in elegant, hand-turned pottery, and visitors can watch local artisans at work using a traditional potter’s wheel.

If you use red clay pots, there’s a good chance they came from Marshall Pottery.

Though not exactly a tourist attraction, downtown’s Sam B. Hall Federal Courthouse can be one of the busiest in the country. Around 2001, a few important judges implemented “rocket docket” procedures to quickly move patent trials through the system. “As a result, we get law firms from all over the country coming here to try patent cases,” says local attorney Sam Baxter. In addition to being a point of pride for Marshall, this abundance of patent cases—and the influx of lawyers—has also proved economically beneficial for the town.

Marshall continues to grow, while still embracing its history, according to Donna Musselman and her husband, Michael, who own the Three Oaks Bed & Break-fast. A restored, sunshine-yellow Victorian built in 1895, it sits just a few blocks north of the courthouse.

“This was the party house of Marshall: The original owners, Paul and Nannie Whaley, hosted large, grand soirees in the upstairs ballroom,” says Donna. During her personalized tours of the house, she shares stories about the home’s many antiques, including the seven-by-five-feet diamond-dust mirror from the mid-1800s, which reflects the home’s interior. The glass in this Renaissance Revival-style mirror is an inch-and-a-half thick; with its gilded frame and the elegant, sculptured portrait finial at the top, the entire piece weighs about 500 pounds.

Such active preservation is taking place all over town. In fact, several historic mansions, in various states of renovation, share the block with Three Oaks.

Downtown Marshall, too, generates enthusiasm for more contemporary tastes. There are still plenty of antiques shops, but new clothing boutiques, housewares stores, and cof-fee shops do steady business as well. Under the Texas Sun Wine and Gift Shop hosts wine tastings along with live music per-formances, drawing guests from throughout East Texas and beyond.

Because Marshall is only about 40 miles west of Shreveport, I meet several Louisiana visitors during my stay, as well as many transplants, including Brett Spivy, chef and co-owner of downtown’s popular Blue Frog Grill. “I just fell in love with the place,” says Spivy. “It’s like Mayberry with WiFi.”

Spivy opened the Blue Frog in August of 2007. The large, bright, 52-seat restaurant has hardwood floors and exposed brick walls. Its menu covers traditional Texas café standards, such as catfish, chicken-fried steak, and hand-cut rib eye, with most ingredients procured within 90 miles of the restaurant. But sometimes Spivy offers surprises, like sashimi-grade yellowfin tuna and Jekyll Isle crab cakes with organic baby greens.

Before hitting the road, I stop into Prospero’s one last time. Sure enough, several people are sitting around, hashing out the affairs of the world. I sip a cup of coffee, and even put in my two cents. I also learn that last June, Prospero’s hosted a Bloomsday Festival. This traditionally Irish event celebrates author James Joyce and his highly regarded masterpiece Ulysses.

When I finally get back on the road, I am confident to leave the world’s—and Marshall’s—future to Prospero’s. After all, anyone who can pull off Bloomsday deep in the Piney Woods of East Texas must know a thing or two about getting things done.