Bluebonnets provide a lesson in growing up Texan 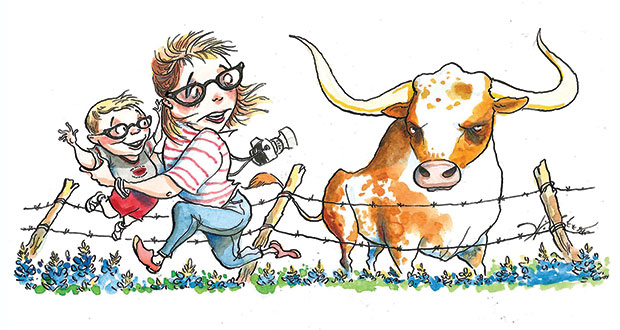 Many accolades have been accorded Lady Bird since her death at age 94 in 2007, but for me her crowning glory is the bluebonnet portrait, the wildflower photographs that are the signature of the classic Texan rite of spring. These photographs of children bundled out of the car by mothers who thumb-lick bangs and straighten collars before launching them into the floral sea are perhaps the truest legacy of Claudia Alta Taylor Johnson.

I think back to a roadtrip when I returned to Texas the spring that my son was 4. I had spent years of roaming the world, but nowhere else had I seen anything to equal the explosion of joy – and subsequent travel planning – that accompanies the blooming of Texas’ spring flowers. I think it was because of that one wildly free bluebonnet portrait session with my parents that I felt, upon my return, I had to make up for the years I had not photographed Elliott in a pool of bluebonnets. On every outing I looked for wildflowers, awaiting an opportunity to haul my less-than-interested son out of the car for a portrait.

It was near Johnson City that I attempted to seize the day. Driving the Willow City Loop, hoping to show Elliott the workings of a nearby turkey farm, I saw the shimmer of blue. I determined this sunny, spring day was the one that would allow me to initiate my New York-born child in the rite of passage he had missed. He may not have been born in Texas, but a bluebonnet portrait would go a long way toward making things right.

At that age Elliott was notoriously difficult to contain. No matter where we were, the minute I unbuckled the carseat his legs would begin pedaling like a wind-up toy. Set him down and the boy would literally hit the ground running. Fast. I forgot about that in the split second that I unbuckled him, pointed out the bluebonnets, and turned to get my camera. When I turned back he was not posing in the puddle of blooms, but well beyond. I watched in horror as he attempted to scramble through a barbed-wire fence for an up-close and personal encounter with a bull.

The bull lowered his head at this approaching threat. And snorted. Elliott suddenly realized this was not a friendly beast and turned to me with what can only be described as – no not terror, but pure elation – in his eyes.

“Mom,” he shouted, “I think I want to be a cowboy!” Fearful this meant he was about to give bull-riding a shot, I broke my personal best for sprinting. When I got him back in the car I was so winded and exasperated that I did not take the photo.

Elliott does not remember the flowers or the attempt at photography that day. He does remember the bull. And maybe that is memorial enough, because in some small way I think it was the day he set his Texas roots. Only a small percentage of bluebonnet seed germinates the first season after planting. This is nature’s way of ensuring the species survives during periods of adverse growing conditions. When commercial seed producers began selling the wildflower seeds to gardeners they learned that the seed’s shell has to be roughed up a bit so that it will germinate sooner rather than later. The process is called scarification. Texas A&M researchers say that the seedlings of scarified seed are also more vigorous.

I think that bull did scare Elliott a little bit. I also think the encounter seeded the Texan deep within him. More proof, I think, that a little scarification will have you bloom where you are planted.