The Spirit of a Bandera Dance Hall Lives On

Congregate under the stars at the famed Silver Spur Dance Hall

Written by Tyson Bird, Photographs by Kenny Braun | From the September 2020 issue | Updated: August 27, 2020 | Filed Under: Where to Stay 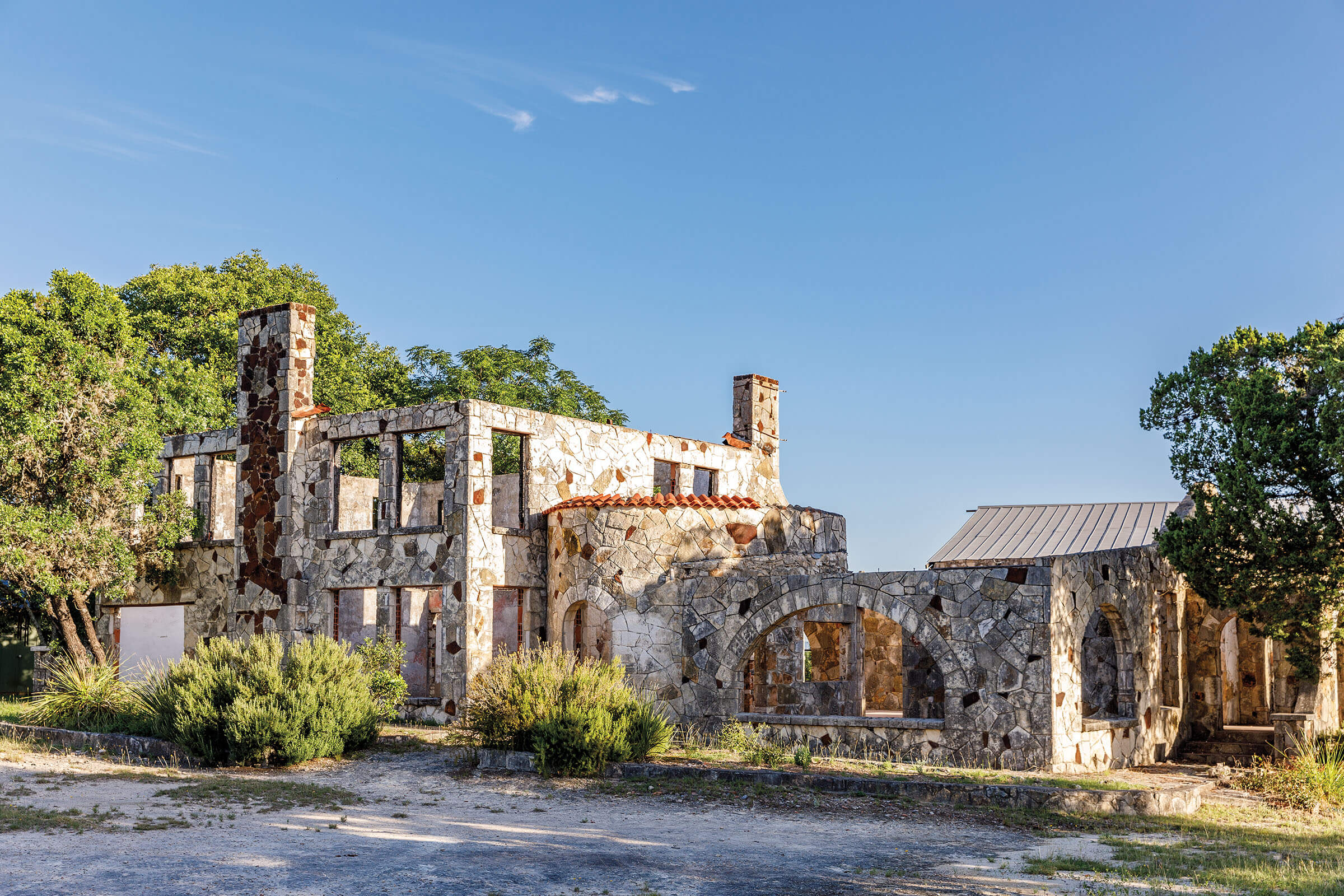 The ruins, 97 steps above the Medina River, are what has become of the dance hall founded in 1934.

Pascale Payne first stumbled onto the old stone ruins of the Silver Spur Dance Hall while exploring the backroads of Bandera nearly three decades ago. Every time her family returned to the Hill Country on vacation from their Dallas home, she found herself again driving across the low-water bridge on the southwestern edge of town, where the Medina River flows past bald cypress trees. Then, down a narrow road that twists and turns as it ascends a rocky bluff. There, perched on the cliff’s edge of Rugh Hill, the magnificent walls of the dance hall stood like an ancient monument to more rollicking times.

“The ruins always fascinated me,” says Payne, who grew up in France. “It reminds me of Europe when you travel, and you always see the castles on the hill, and you are drawn to them. I never stepped foot on the property, but I would drive up to it and just check it out.”

Four years ago, Payne gave in to her fascination and bought the empty “castle.” On the 3-acre property, she now rents out four renovated cottages made of the same native stone as the dance hall. (Search Airbnb for “Silver Spur Dancehall Ruins.” The property is designated Enhanced Clean, a service for COVID-19 and beyond.)

Payne hasn’t made any changes to the dance hall, which is said to have burned down in the late 1950s or early ’60s. “It could never be a commercial property again,” she says, “which is fine with me. I love the old stones, and I wouldn’t be able to rebuild it just the way it was.” 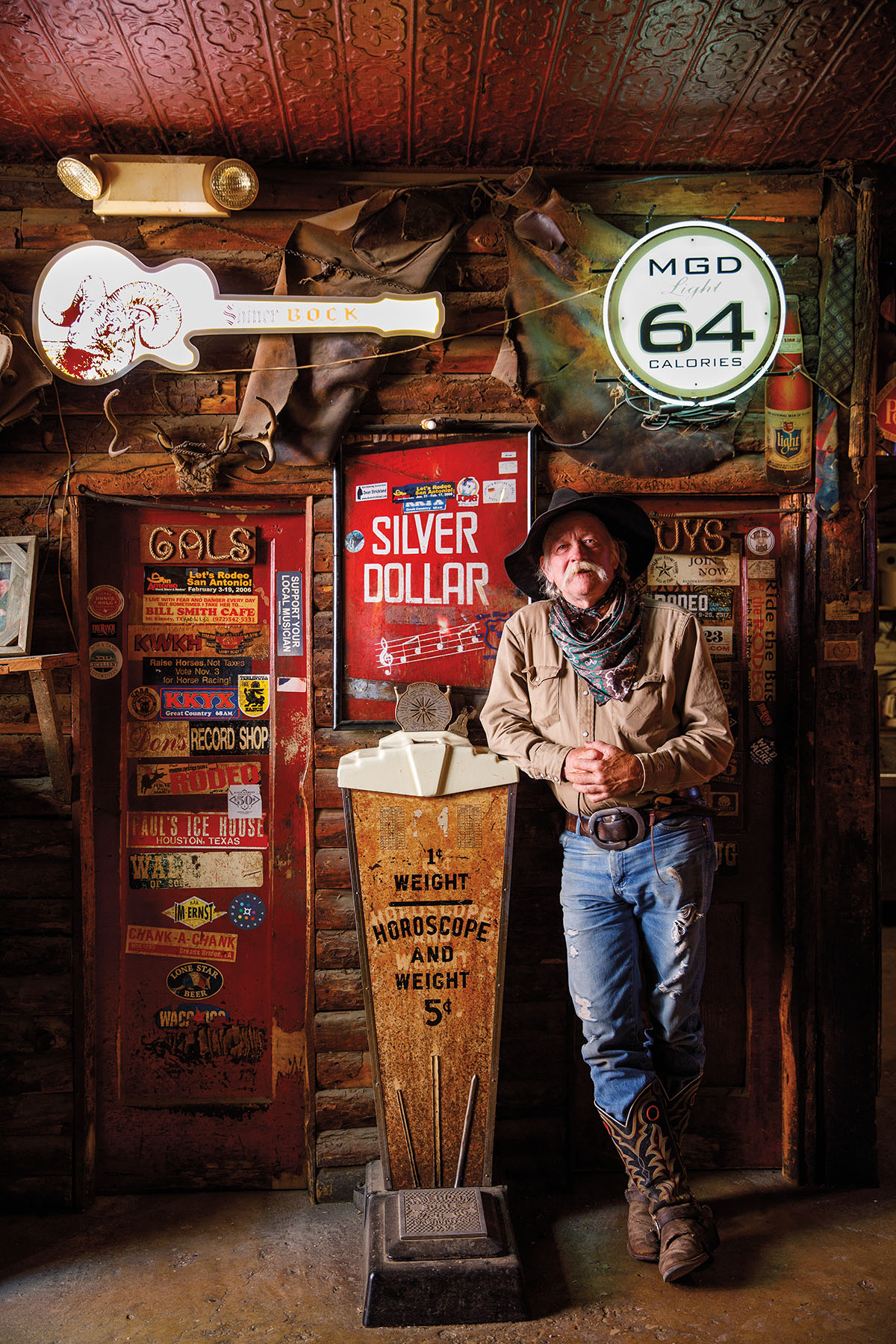 Large gatherings are no longer held at the roofless, open-air dance pavilion, connected to the Medina River below by 97 stairs made of rock. But the space remains a sanctuary for couples and history buffs. Cabin guests can explore the ruins during the day and stargaze from them at night, perhaps after an evening of dancing on the sawdust-strewn floors of Arkey Blue’s Silver Dollar, the venerable honky-tonk about a mile down the road. The sun rising over the leafy flood plain of the river provides the ideal backdrop to take in the sights. Visitors can climb the concrete stage where bygone musical performers from the big band and Western swing eras kept the crowds waltzing and two-stepping for decades.

Bandera residents Stella Rugh and her first husband, Emil Rugh, the owner of a meat market, founded the dance hall as Mt. Rugh Courts in June 1934. Long since deceased, they operated 11 fieldstone cottages, a clubroom, and a “commodious dance patio,” according to a front-page article in the Bandera New Era unearthed by local historian Raymond V. Carter Jr. on behalf of the Frontier Times Museum in Bandera. To commemorate the grand opening of the “pleasure resort,” more than 700 people attended a Saturday night dance.

Bandera native H. Alfred Anderwald remembers feeding coins into the nickelodeon about a decade later, when he was a teenager in the mid-1940s. “We was all poor kids, and we’d maybe have a quarter apiece,” he recalls. “We’d play a few records and dance a little bit, and sit and talk.”

Stella, who later remarried and went by Stella Hubbard, lived in a rock house attached to the dance pavilion and dealt with the music many nights. “Ms. Hubbard would get tired of sitting there waiting for us to put a nickel in the box, and she’d tell us, ‘When y’all get through, just roll the jukebox inside and unplug it.’ So, we did.”

According to Anderwald, some drivers struggled to make the hairpin descent from Rugh Hill after a night of carousing and slid off the road. They’d have to trudge back up to the dance hall and round up several revelers to maneuver the car back on track. Anderwald himself got into a little mischief once at the Silver Spur when he was about 18 years old.

“The old guy at the liquor store sold me a bottle of Guckie”—Guckenheimer whiskey—“and I went up there, and I was drinking that stuff, and I got to dancing around and sticking my elbows out, just daring somebody to push me,” he says. Anderwald looked around and noticed a bunch of guys who were much bigger than he was. The intimidating sight triggered a rowdy outburst. “I threw four or five chairs out the windows, and then I decided I better go home before I got in trouble,” he says, “so I eased out the back door and left.”

With the exception of a performance by Harry James, a trumpet-playing big band leader who married Betty Grable in 1943, Anderwald questions the long list of big-name acts who are thought to have entertained at the pavilion. (Over time it was temporarily roofed and renamed the Silver Spur Room at Mt. Rugh.) So does Payne. “We have not found proof that those people performed there,” she says of the proud claims that everyone from Hank Williams to Dolly Parton once crooned at the Silver Spur.

The names of the venue’s supposed top entertainers are painted on a wall behind the stage. They are also promoted in Silver Spur collateral materials that predate Payne’s ownership. In the previous owners’ marketing zeal, it’s possible that someone confused the Silver Spur with another Bandera dance hall called the Cabaret, which operated for seven decades on Main Street. The Cabaret did host a veritable “who’s who” of musicians —Bob Wills, Ernest Tubb, Loretta Lynn, Doug Sahm, Steve Earle—before it closed for renovations about seven years ago and never reopened.

Advertisements in Bandera newspapers from the 1940s and ’50s tout musical acts at the Silver Spur that are not as well-remembered today. These include Jimmie Revard and his Oklahoma Playboys, one of the Southwest’s top Western swing bands before World War II, and Willie Moore and his Avalons, who performed shortly after the dance patio opened in the summer of 1934. Ladies got in free; gents had to cough up 40 cents.

No matter who performed at the Silver Spur, it remains an impressive structure with sweeping arches and towering rock chimneys on the top of the hill. No one contacted for this article was quite sure exactly when the Silver Spur burned down, and the stories surrounding it are considered hearsay. “There wasn’t very much up there to burn,” Anderwald says. “The railing and everything was rock.”

Former Bandera resident Juanita “Amah” Jenkins bought the property and moved back to the Hill Country town in 2000, operating the vacation cabins until her death in 2014. Payne noted that every owner from Hubbard through Jenkins on down to herself has either been a single or widowed woman. Payne’s goal is to preserve the place’s history—she dreams of winning the lottery and restoring the house attached to the dance pavilion.

“It used to be a mansion on the hill by itself, and then Stella had to find a way to make an income off it, so she added the dance hall in the back,” says Payne, who recently hired a team of engineers to examine the stability of the rock walls. It seems the dance hall ruins will be standing there, on the bluff above Bandera, long after the rest of us are gone. “They looked at it and said, you know, if it’s been standing for 100 years, it shouldn’t go anywhere.”

The Silver Spur went silent decades ago, but it’s not hard to find live music a mile away in downtown Bandera. At the 11th Street Cowboy Bar, a watering hole straight out of the Wild West, country acts take to the outdoor stage on weekends. 307 11th St., Bandera. 830-796-4849; 11thstreetcowboybar.com

In the basement of the Bandera General Store just around the block, dancers two-step and waltz every night at Arkey Blue’s Silver Dollar, founded in 1921 as The Fox Hole and owned by singer-songwriter Arkey Juenke since 1968. Immortalized by Robert Earl Keen’s song “Feelin’ Good Again,” Arkey Blue’s is thought to be the oldest continuously operating honky-tonk in Texas. 308 Main St., Bandera. 830-796-8826; facebook.com/arkeyblues.silverdollar