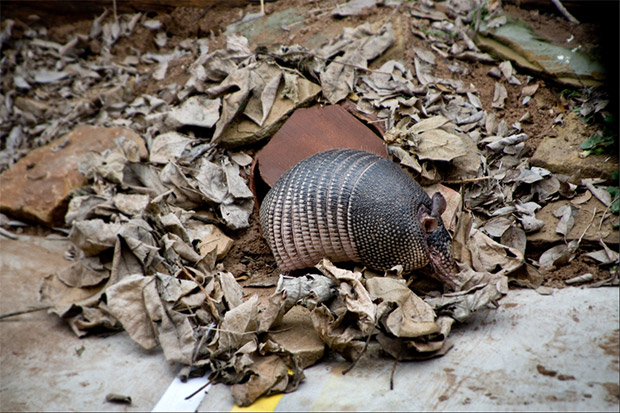 Pennsylvania will grab some national attention when Punxsutawney Phil, the prognosticating groundhog predicts the timing of spring by the presence (or lack thereof) of his shadow on Groundhog Day, today/Feb. 2. But on this balmy Texas day (68 low/77 high), it’s hard to believe that the weather in Pennsylvania (26 low/44 high) has anything to do with the weather in the Lone Star State. But that’s been remedied by the little armored Bee Cave Bob and Armadillo Day.

So what’s the formula?

At 12:30 p.m. on Tuesday, Feb. 2, armadillo Bee Cave Bob is prodded out of his subterranean layer under the careful watch of characters such as Al Manac, Wayne Guage and Hugh Midity. If he stays out of the hole, then spring is near. If he returns to the hole, then there’s a lot more winter in store for us.

A group calling themselves the Knights of the Benevolent Raccoon kicked off the first Armadillo Day in 2012, with founding member Terry Boothe at the helm. Boothe owns property, officially designated by legislature in 2007 as “West Pole, Texas” (Highway 71 at Bee Caves Road in the Village of Bee Cave near Austin). There, folks wait to see if the armadillo, named Bee Cave Bob, emerges to forecast an early spring or long winter. Typically, Bee Cave Bob is a lot more optimistic in his predictions than Punxsutawney Phil, with spring usually nipping at our heels.

Clearly it’s all in good fun, but if I’m going to give credence to any of it, yes … I’ll stick with Bob. Sorry Phil.

Who says Texans don’t have a sense of humor?