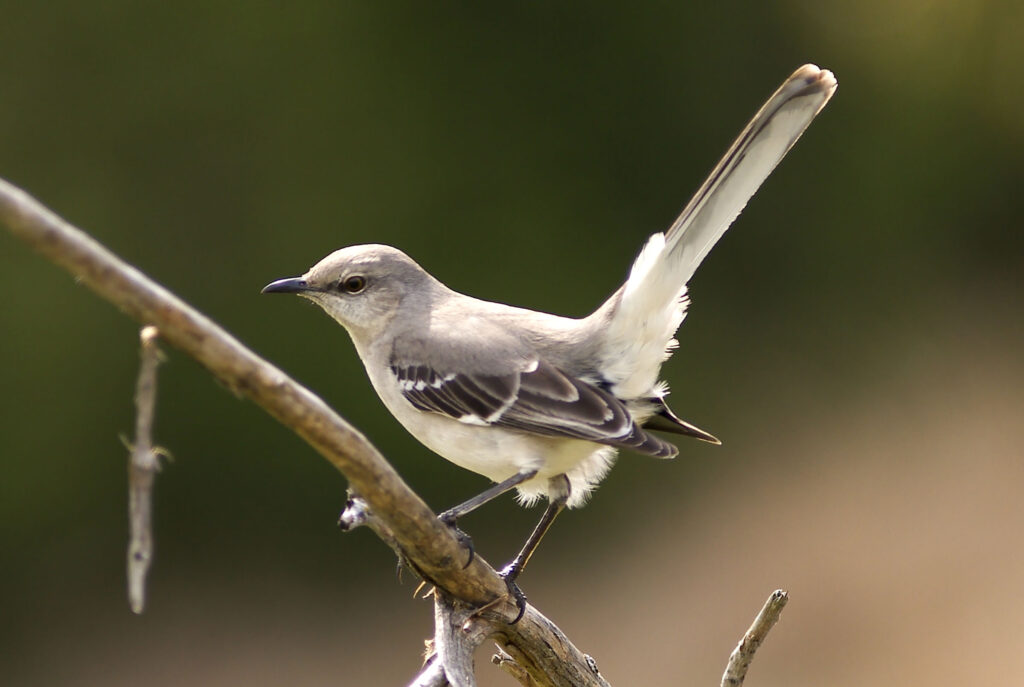 The mockingbird has been the Texas State Bird for close to a century. Photo by Michael A. Murphy.

Since January 1927, the northern mockingbird has been the state bird of Texas, an honor shared with a whopping four other states. In one of those states, Florida, there is a drive afoot to shoo the mockingbird from its lofty perch and replace it with a bird that’s more reflective of the state’s uniqueness. After all, there is nothing especially Floridian about encountering a northern mockingbird. Sightings are common in suburbs and parks from New England to California. With its mimicry and sweet singing, it’s a perfectly charming bird, but is it worthy of the top accolades of 10% of all American states?

Florida State Sen. Jeff Brandes, a Republican who represents St. Petersburg, is leading the effort to—ahem—flip the bird by writing legislation to swap the mockingbird out for a bird to be named later. “Part of what we’re working to do is highlight that Florida has these incredible species and we should recognize the bird that most represents Florida,” he told the Associated Press back in November. “To me, it’s a fun conversation to have.”

It is, and one that’s long overdue in Texas. As a bird nerd who grew up moving back and forth between Texas and Tennessee, where the mockingbird also reigns supreme, it always seemed a shame to me that Texas would settle for such a commonplace bird. In Tennessee, a state culturally typical of the Old South and geographically typical of eastern woodlands and mountains, the mockingbird is fine. But in Texas, a state so impossibly vast and varied that it’s like a whole other country?

We are Texas. We don’t need to be sharing our state bird with multiple states. Period. That is why I think it’s time we get a new state bird, and I have a few worthy candidates.

Deep in the Heart of Texas

Before listing possible replacements, there are some ground rules. First, a state bird should live year-round in all or most of the state it represents. According to the Texas Bird Records Committee of the Texas Ornithological Society, as of December 2021, some 657 bird species have been officially recorded in Texas. A little over half of them are migratory, so there goes such striking birds as the sapphire-like indigo bunting, the scarlet tanager, and the whooping crane, which is not only migratory, but too rare and confined to a tiny area. Simply put, part-time Texans don’t qualify.

That’s Right, You’re Not from Texas

A much smaller number of species—perhaps a dozen or so statewide—hail from other continents and were introduced into the wild. These include the house sparrow, the pigeon, and the starling. Escaped pets are another source of non-native birds: South American monk parakeets have established colonies atop power line towers of most Texas cities and atop palms along the coast. While the monk parakeet is a popular new arrival, and lives across much of the state, it can’t be the state bird because, like the Lyle Lovett song, that’s right, it’s not from Texas. But Texas loves them anyway.

Miles and Miles of Texas

Removing the migrants and artificially introduced leaves us with about 350 birds to choose from, a wealth by any measure. Here is where our size and varied terrain gets us into trouble. The Texas Parks and Wildlife Department divides our roughly 270,000 square miles into 10 distinct eco-regions, ranging from the Piney Woods to the Trans-Pecos desert, from coastal prairies and marshes to the Edwards Plateau and the High Plains.

Most birds prefer one or more of those niches over the rest, so how to find one that unites the entire state? Few birds in North America are as stunning as the green jay, but the fact that this Texas native seldom strays north of the King Ranch rules it out as anything but a regional delight in deep South Texas. Way out west, Rocky Mountain species like the Chihuahuan raven rarely leave the crags and cactus of the Big Bend and its immediate surroundings. Likewise, coastal stunners like the pink roseate spoonbill are out.

I’ll See You Around My Hometown

There is also a risk of choosing a bird that is too commonplace, and I would argue that is our current status. About one in 10 of the 350 or so native species are so-called backyard birds, including chickadees, robins, blue jays, crows and grackles, woodpeckers, and native doves. Taking a bird from this category makes no real statement about Texas specifically. These birds are the suburban strip mall staples of avian wildlife: there’s plenty of mass appeal for some, but generally speaking, something more local is usually better.

So where does that leave us? To me, we are left with the birds of the Lone Star State’s great in-between, the backroads of the state. Luckily many of these contenders are some of the most attractive birds we have.

1. The Greater Roadrunner. Though most common in West Texas, the roadrunner has been recorded in all 254 of Texas’ counties. You want charisma? It’s got it: Through both the Warner Bros. cartoon and homespun folklore, the roadrunner is universally recognizable, intensely courageous (they kill and eat rattlesnakes, for Pete’s sake), and as a primarily bipedal creature, relatable. While roadrunners can fly, they much prefer not to.

Drawbacks: We’ve been beaten to the punch by New Mexico, but sharing a very cool state bird with one state is better than sharing a far more ordinary one with four.

2. The Crested Caracara. Not only does it live in Texas year-round, its U.S. population lives in no other state (so far), making it something like the H-E-B of birds. Also like the homegrown supermarket chain, it was once seen only in South Texas but is now marching northward, popping up along the upper Texas coast and out towards and beyond the Metroplex. Crow-sized, with white-tipped wings, white crest and sides, and a color-changing face—the skin around its eyes can vary from light blue to dark red—the caracara is instantly recognizable both in flight and when stalking around on the ground in search of insects and reptiles. We Texans can be hard to figure as a people, and so is the caracara. Marveled one Texas naturalist, “Caracaras look like eagles, forage on the ground like chickens, eat carrion like vultures…but are considered falcons!”

Drawbacks: About that carrion… Caracaras adore roadkill. We regard this as nasty and lazy somehow, but we’ve managed to overlook it as a nation since 1782, when we adopted the bald eagle, a lover of dead fish above all else, as our national bird. (Benjamin Franklin, an advocate for the wild turkey, typified this anti-eagle attitude: “[The bald eagle] is a bird of bad moral character; like those among men who live by sharping and robbing, he is generally poor, and often very lousy.”)

3. The Eastern Meadowlark. Nothing quite complements the sound of sweet breezes sighing over the tall prairie grass than the meadowlark’s slightly melancholy whistled trill. Brown-streaked above a bold yellow breast adorned with a black V-shaped marking, the plump meadowlark, which is actually not a true lark, but a member of the blackbird/oriole family, sings from atop fenceposts and powerlines when not stalking the grasslands in search of crickets and grasshoppers. If you want to highlight Texas as an agricultural state, the meadowlark is easily the best bet.

Drawbacks: We’d have a lot of company in all but name and tiny variations in appearance and greater ones in song. The almost identical Western meadowlark is already the state bird of six western states. Only the Northern cardinal is (barely) more popular, and an addition of an Eastern meadowlark to the mix would invariably engender the sort of technical discussions on taxonomy only the most science-minded of ornithologists enjoy.

4. The Great-tailed Grackle. No Texas bird is more polarizing than these enormously gregarious, devilishly clever, hellishly cacophonous fiends. But these “painters” of unfortunately parked cars, brazen thieves of French fries and Cheetos, and freakish cosplayers of Alfred Hitchcock’s 1963 horror flick The Birds are also very Texan. The grackle racket, the birds’ dawn and evening choruses full of shrieks, squawks, and whistles from hell, gives the University of Texas Longhorns’ “Texas!. . . Fight!” chant a run for its money. And they apparently love the state, having decided to move among us and multiply exponentially over the course of my lifetime, staking claims to parking lots and busy intersections alike. But more importantly, if we did adopt the Great-tailed Grackle as our state bird, we’d likely be the only state to do so, forever and ever.

Drawbacks: Simply put, most people hate them—at least in America. It is not a universal sentiment, though; in the coastal Colombian city of Cartagena de Indias, the grackle is revered as the city’s official bird, honored with statues and monuments and the veneration of the people. Perhaps one day Texans will arrive at a similar state of accommodation with the urban Texan’s closest avian companion. I won’t hold my breath.