Wildflowers dot our plains and brighten our mountains. They carpet our hills, line our roadways, and spring up where the sunlight pierces forest canopies. They are tall, short, subtle, or showy, and—in a state that is home to an abundance of blooming plants—we are grateful for all 5,000 of them. Here are 20 of our favorites.

Jump to your favorite:

1
Bluebonnet (Lupinus texensis) begins blooming early spring, but the Big Bend bluebonnet can bloom as early as January. The Texas Legislature designated all six species that grow in the state, which are members of the large lupine genus, the State Flower.

2
Indian paintbrush (Castilleja spp.) blooms early spring throughout the state. There are several species, whose colors vary from scarlet to orange, cream, yellow, and occasionally purple. The bright tips of the petal-like bracts look like they’ve been dipped in paint. The genus name honors Spanish botanist Domingo Castillejo (1744-86). 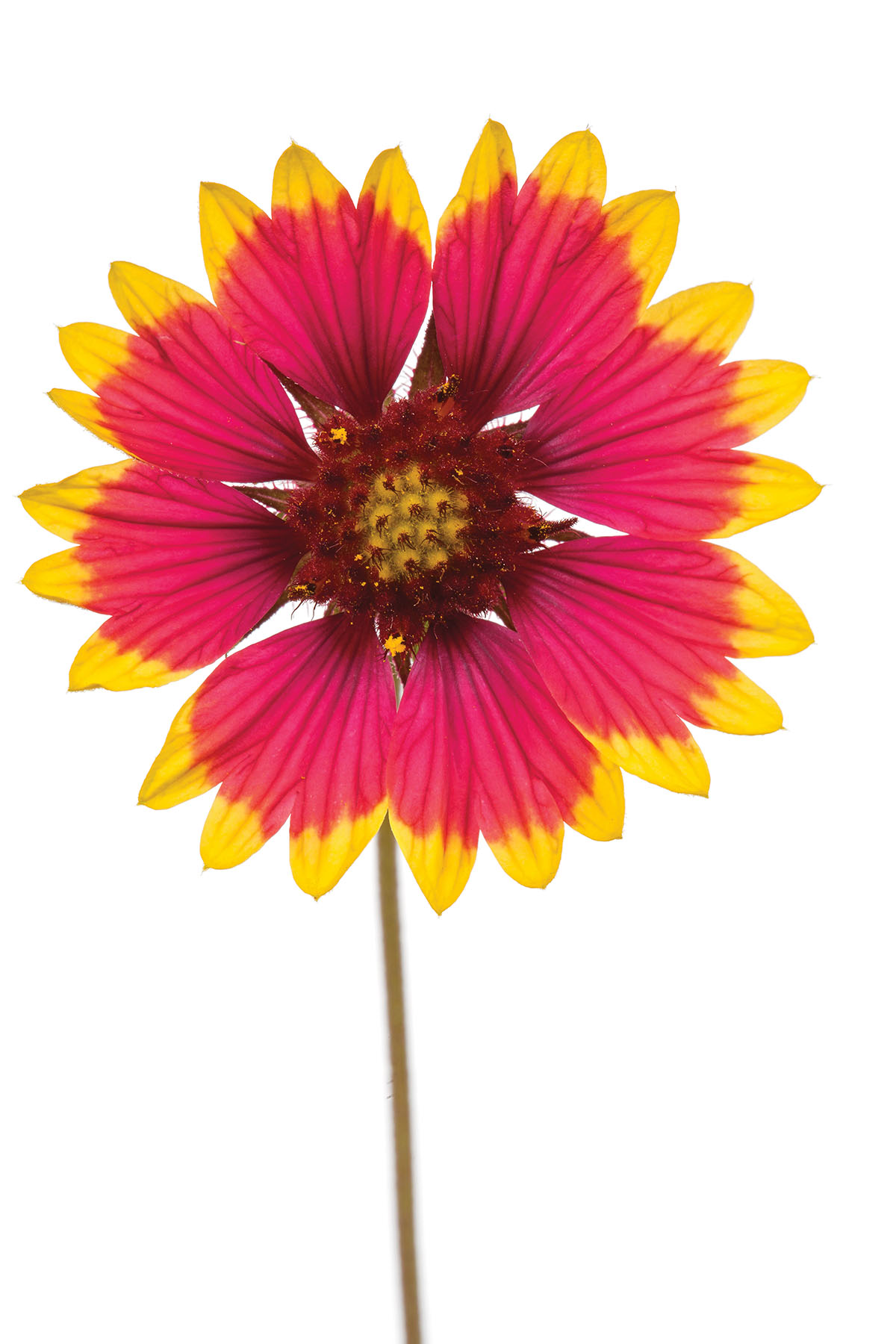 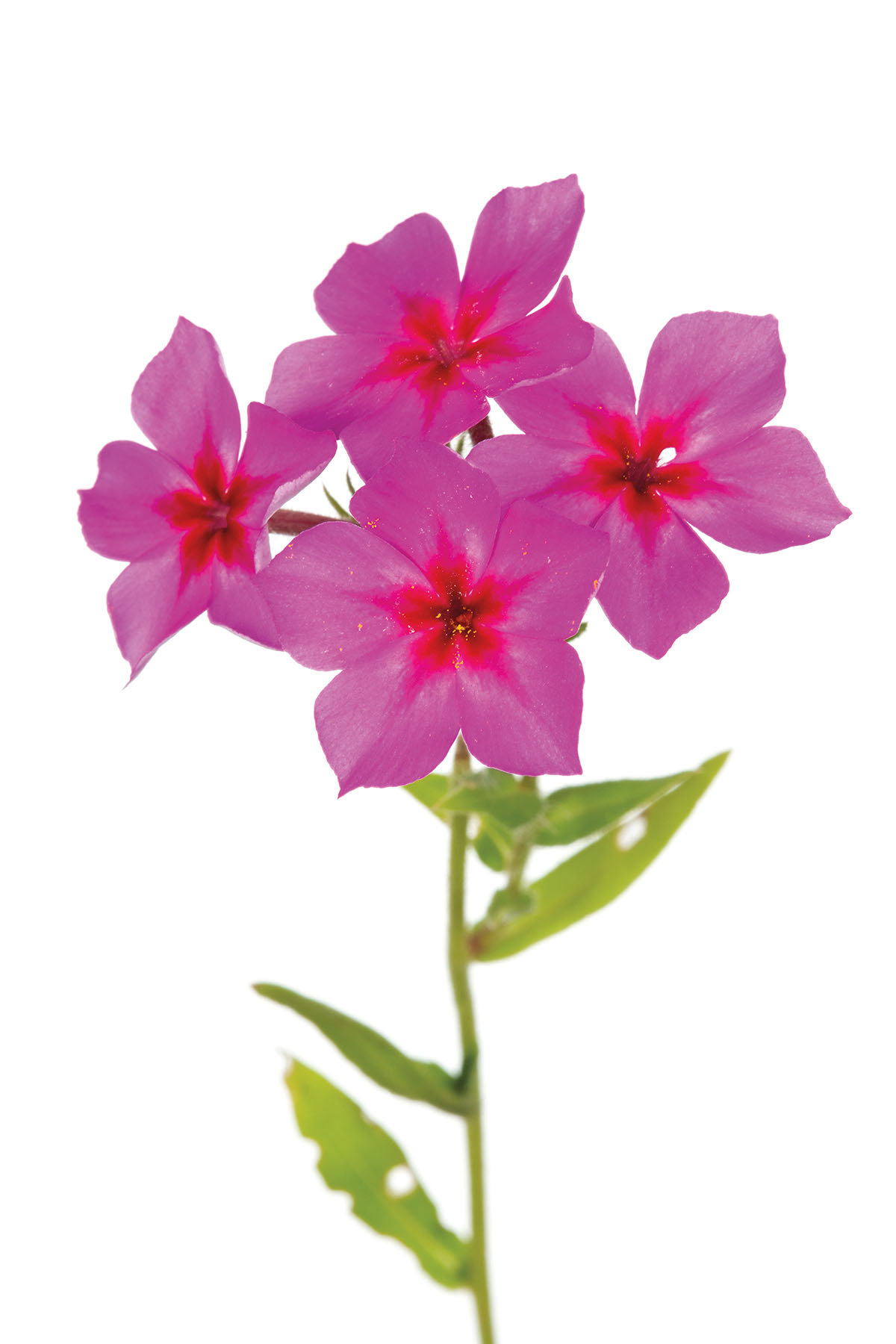 4
Drummond phlox (Phlox drummondii) blooms early spring. They occur most frequently in spectacular masses of color among sandy post-oak woods and along roadsides in south-central Texas and are named for Scottish botanist Thomas Drummond, who collected the plants on a visit to Texas in 1834. The most common color is red, but pink, blue, and purple are also seen. Also called wild phlox.

5
Prairie verbena (Glandularia bipinnatifida) blooms most profusely in spring, but may flower at other times of the year depending on rainfall. Found throughout the state; they’re among Texas’ most abundant wildflowers. 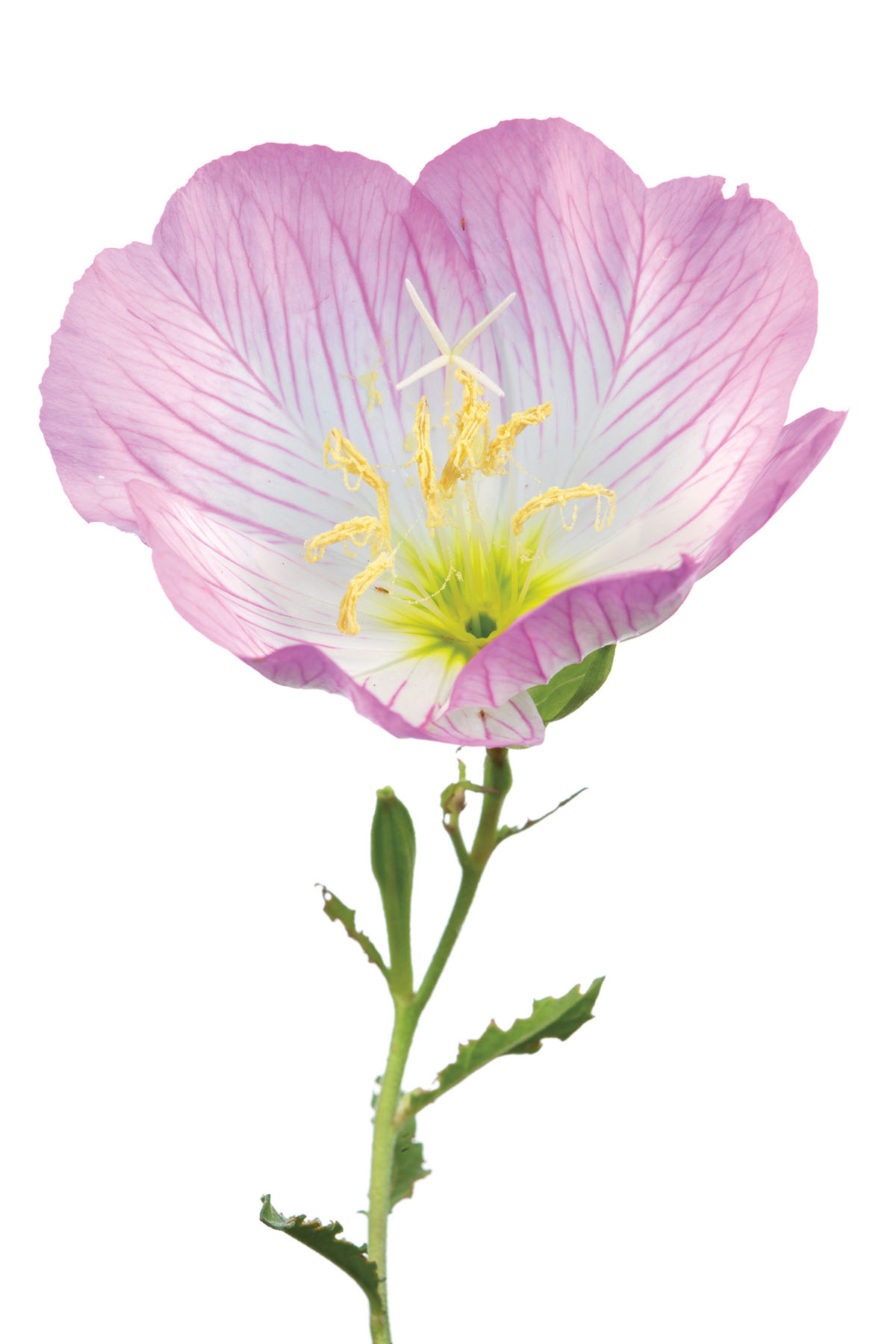 6
Pink evening primrose (Oenothera speciosa) blooms April to June across much of the state. The drought-tolerant flower opens at dusk in northern portions of Texas. Flowers wither each day, replaced by new blossoms each evening. Elsewhere in the state, blooms stay open all day. They’re also known as pink buttercup. 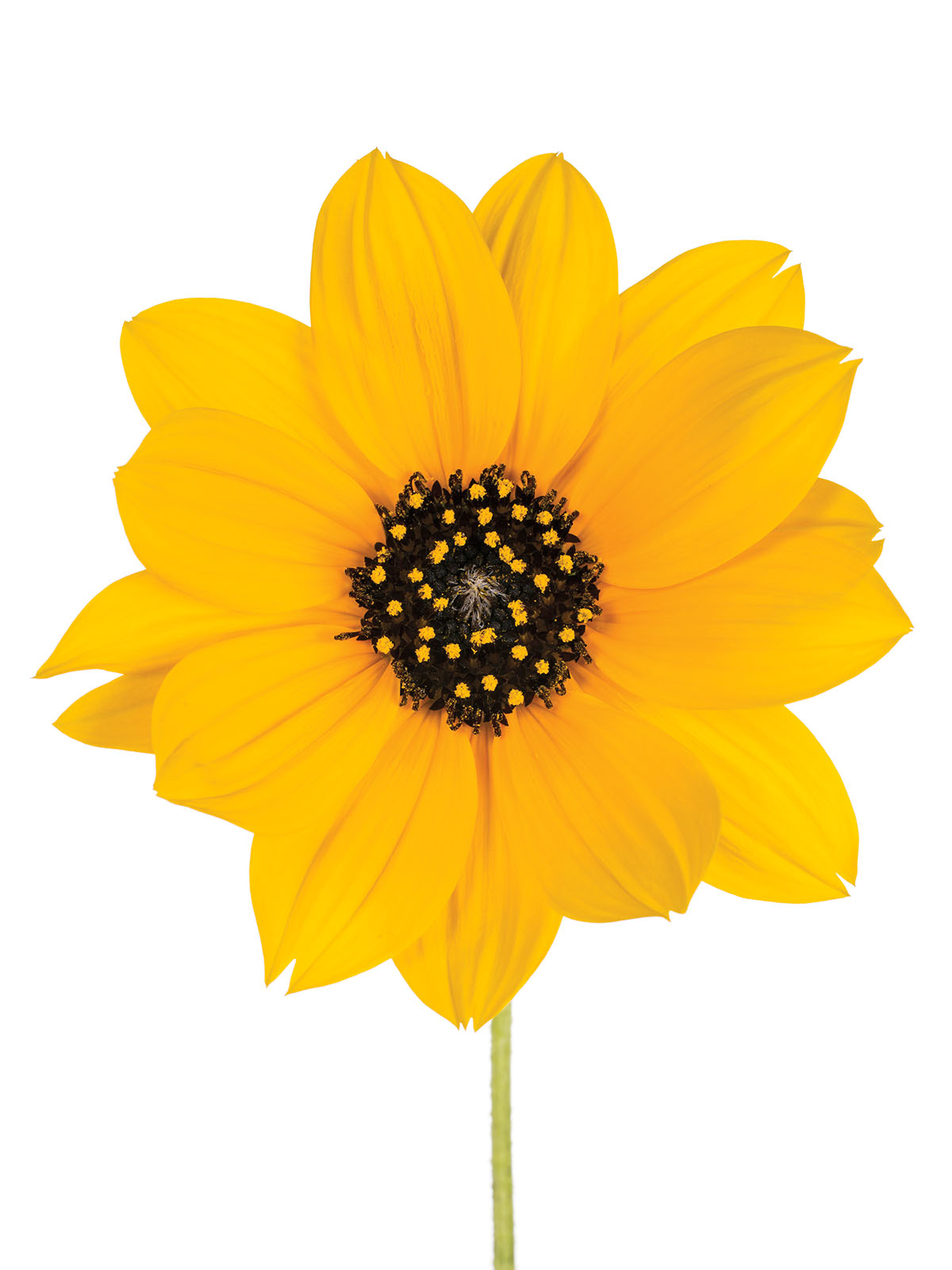 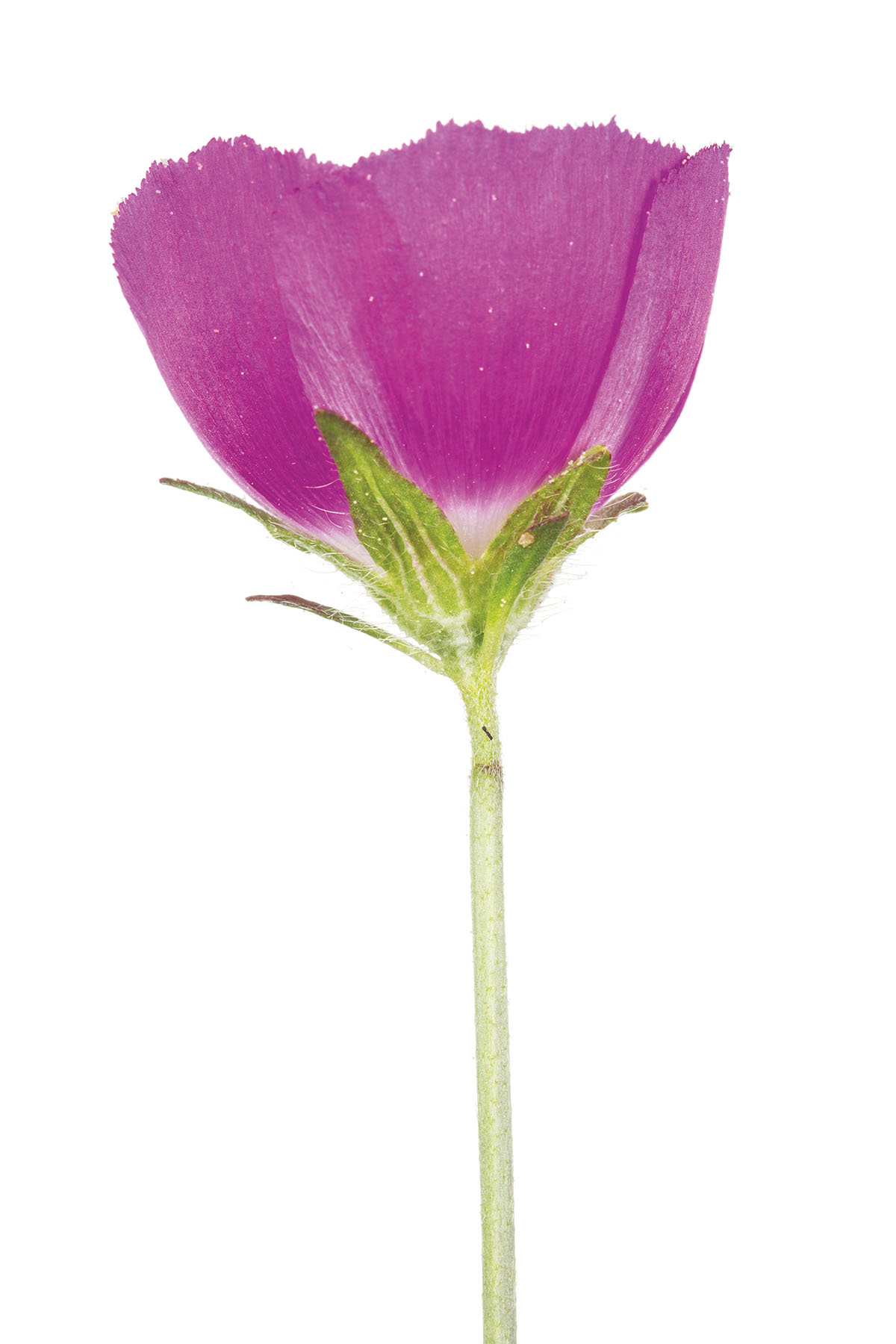 8
Winecup (Callirhoe involucrata) blooms early spring into summer, in most parts of the state, except the west. They grow in sandy soils in open woods and scrublands. A drought-tolerant, mat-forming plant, it grows up to 1 foot high and bears many dark, wine-colored flowers. 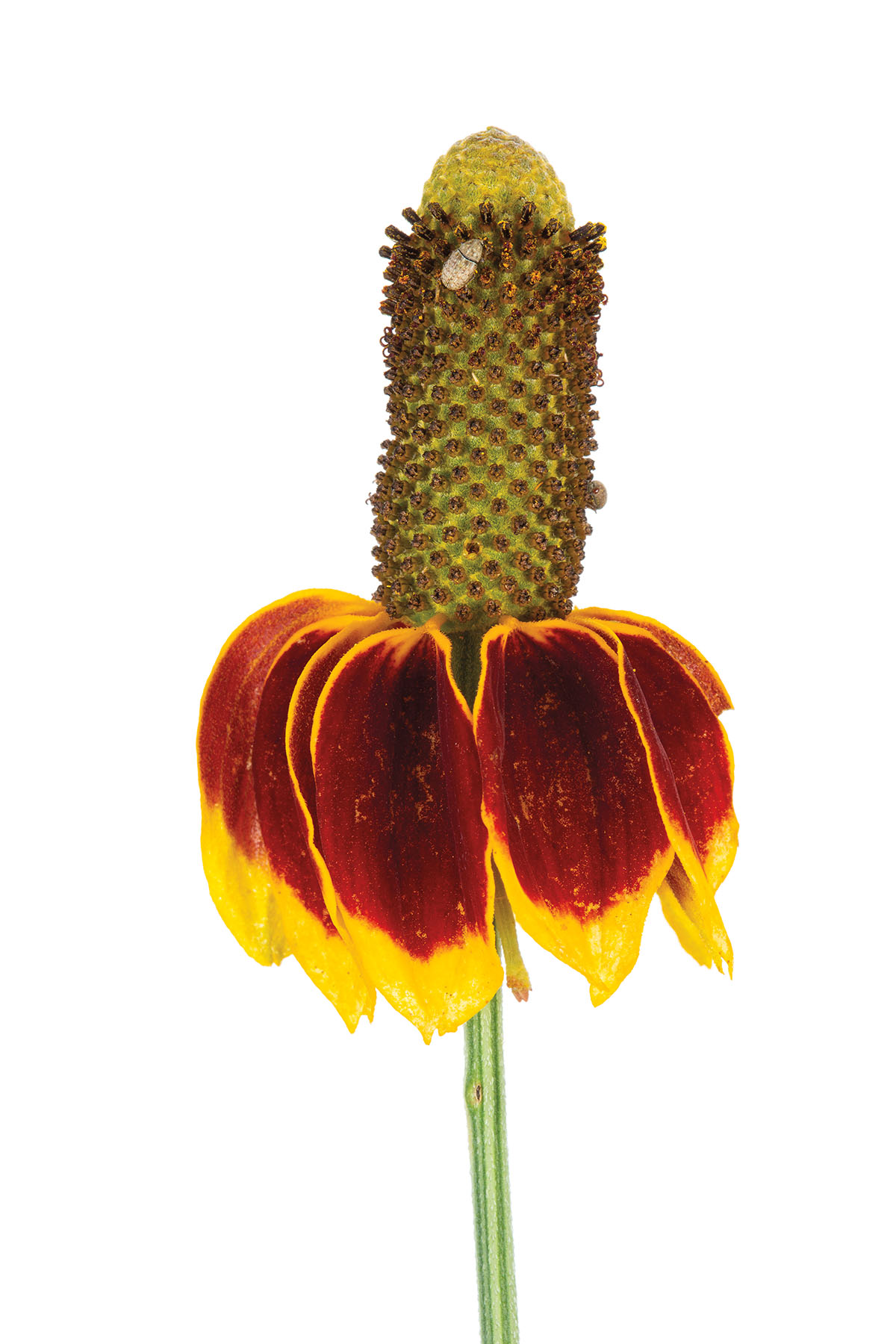 9
Mexican hat (Ratibida columnifera) blooms May to July, or later with favorable weather. Common throughout most of the state, the flower is named for its resemblance to the traditional high-crowned, broad-brimmed Mexican sombrero. 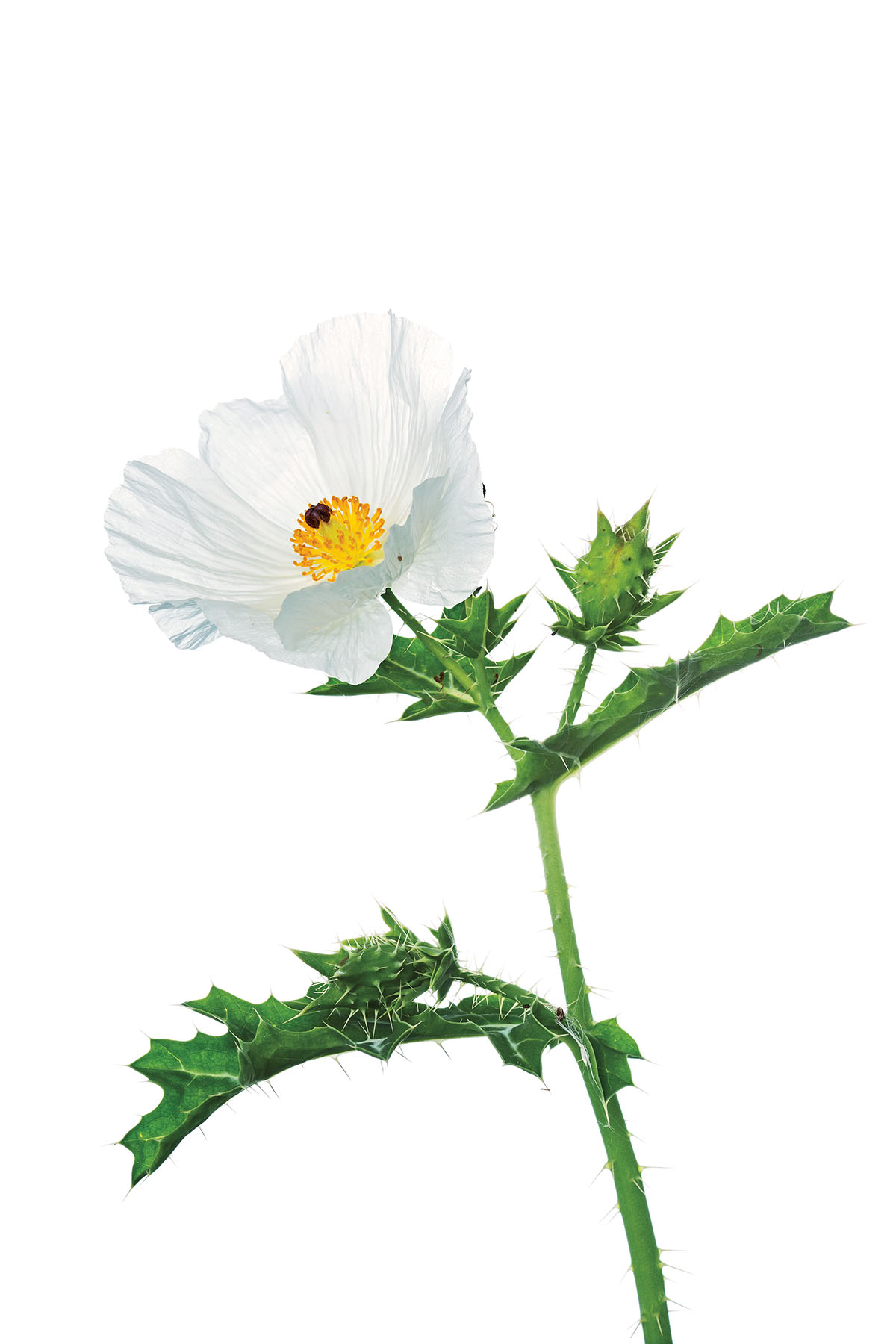 10
White prickly poppy (Argemone albiflora) blooms profusely in April. An abundant, nettle-like plant of Central and South Texas, the plants may grow more than 3 feet tall. Closely related species are yellow, pink, and rose. The herbage is so prickly that cattle leave it untouched even during severe droughts when they have grazed other plants to the ground. 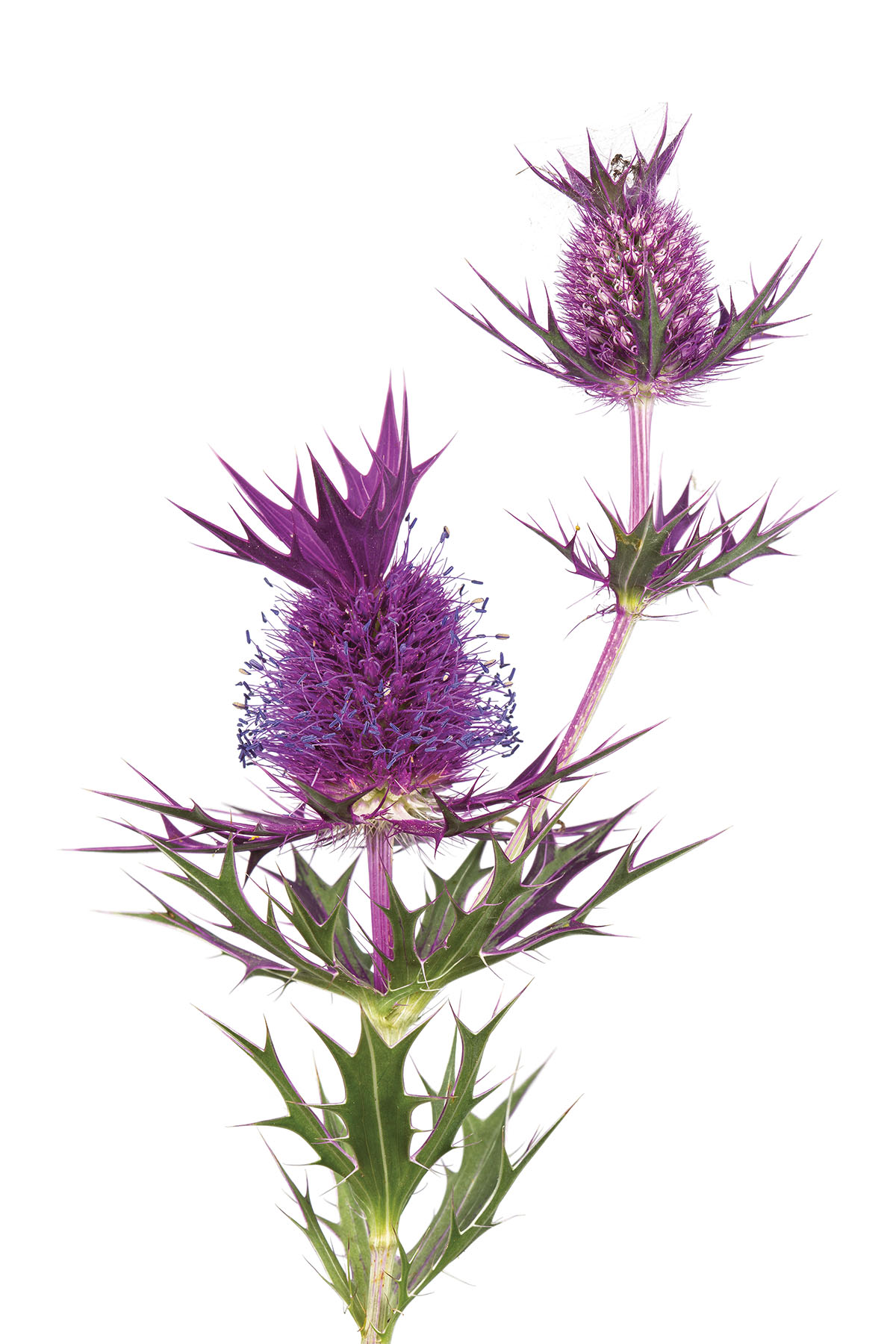 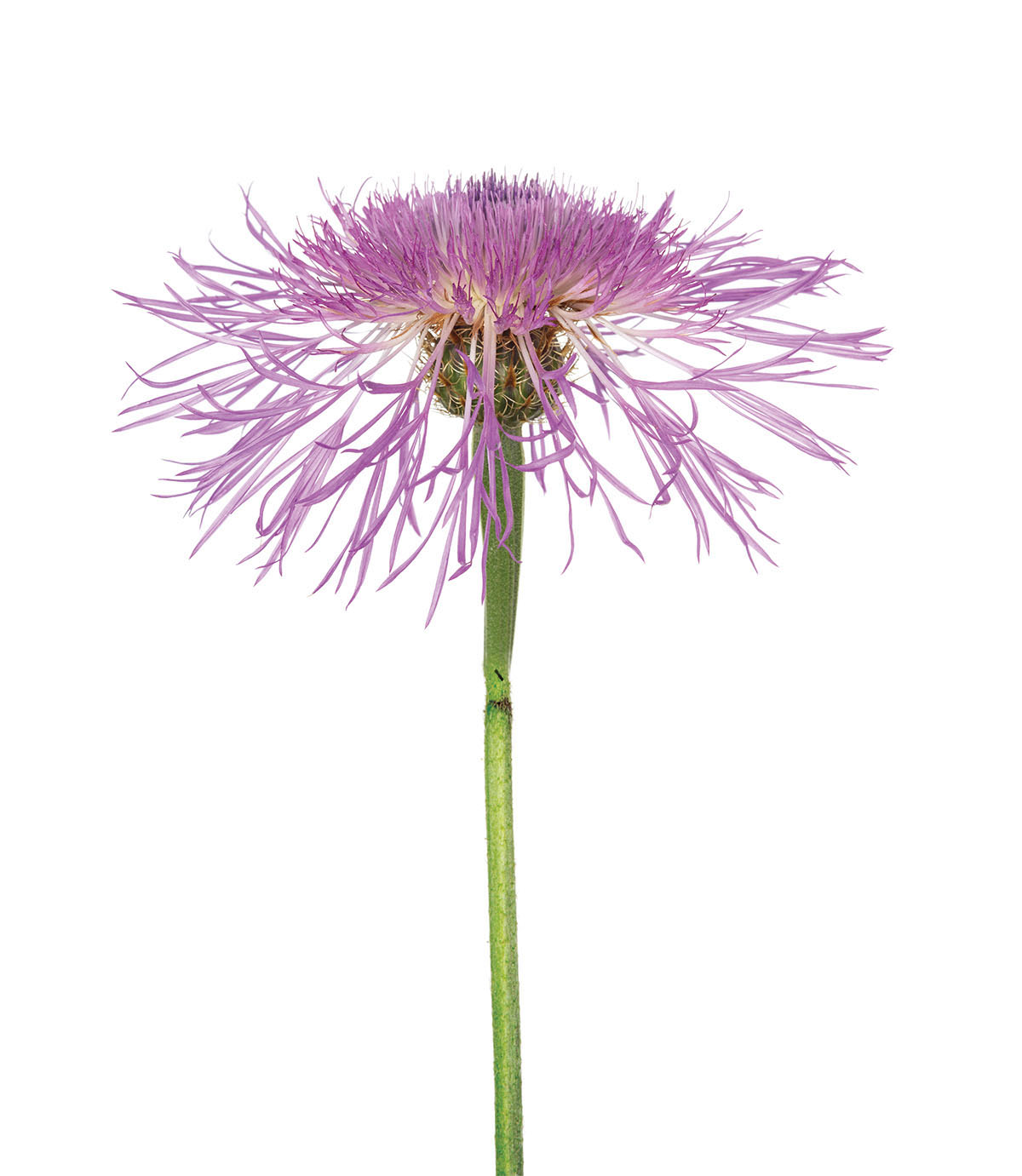 12
Basketflower (Centaurea americana) blooms June and July from east Central Texas westward and north into the Panhandle; in the Trans-Pecos, they sometimes bloom a second time in August. They’re also called shaving brush and star thistle, even though they aren’t prickly like a thistle. 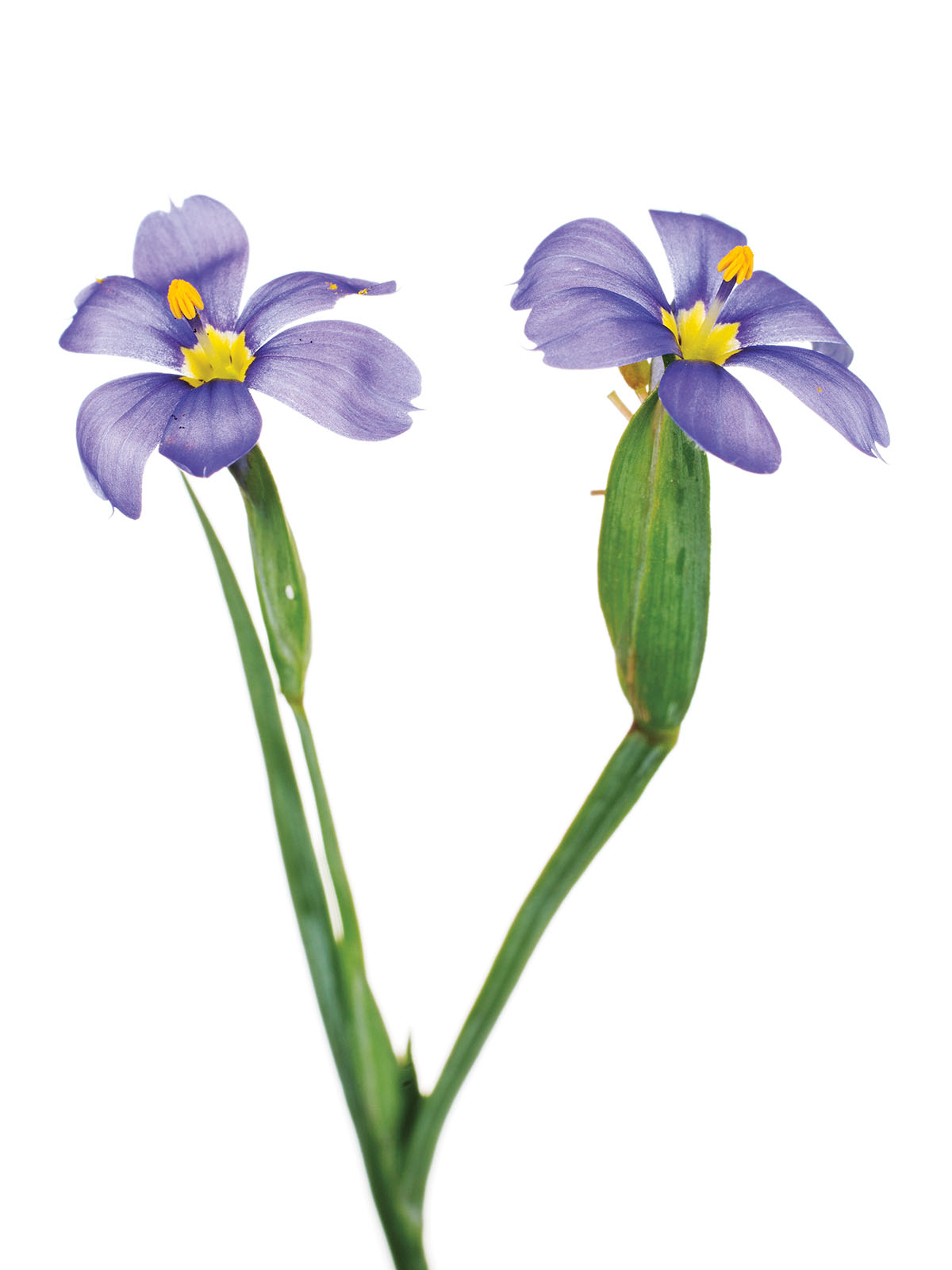 13
Blue-eyed grass (Sisyrinchium spp.) blooms March through May, blanketing roadside pastures with blue to purple blooms and grasslike leaves on sunny spring days. It’s common in sandy forests of East Texas and on prairies of the Texas Gulf Coast. 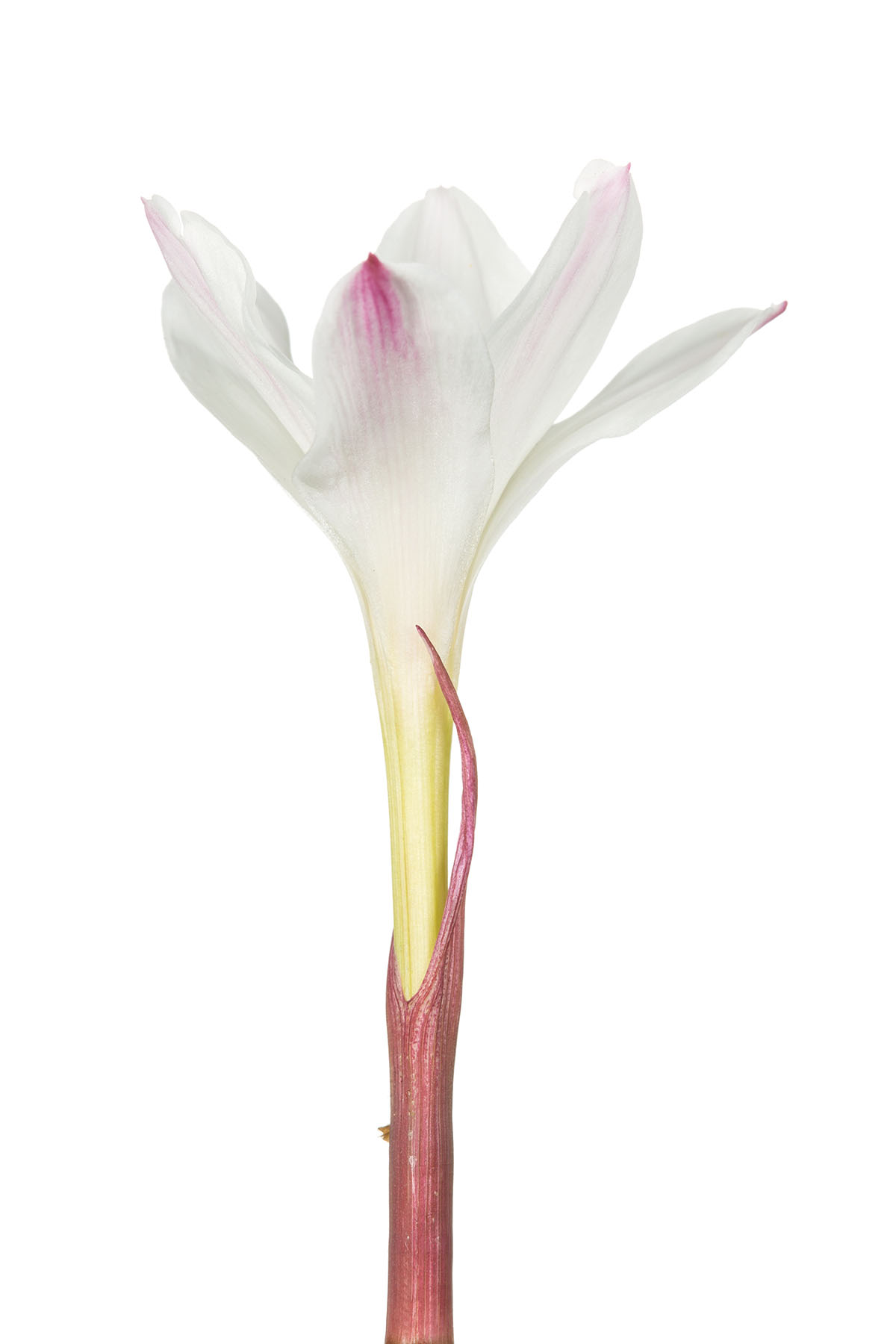 14
Rain lily (Cooperia pedunculata) appears like magic a few days after heavy rains, sometimes in masses—across the eastern two-thirds of the state—with a single white bloom atop a straight, foot-high green stem. Blossoms, with a delicate, lovely fragrance, open slowly at dusk, gradually expanding during the night, in full flower by morning. Flowers may last up to four days before turning pinkish and withering. 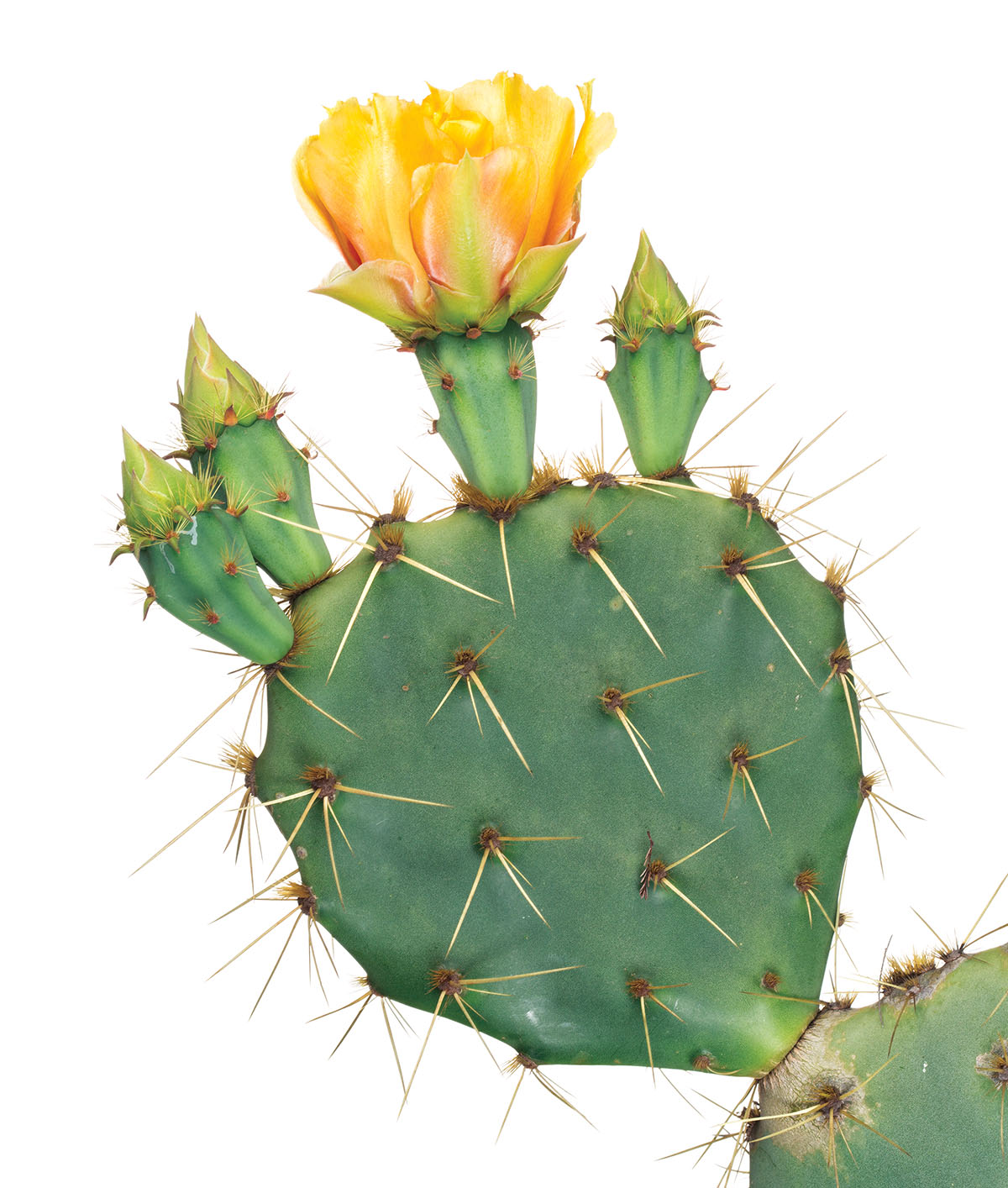 15
Prickly pear cactus (Opuntia engelmannii), a perennial, blooms in shades from yellow to red across the state. The fruit, or tuna, which ranges from red to deep maroon when ripe, makes a very good jelly (see our recipes for prickly pear desserts, a cocktail, and other tasty fare). 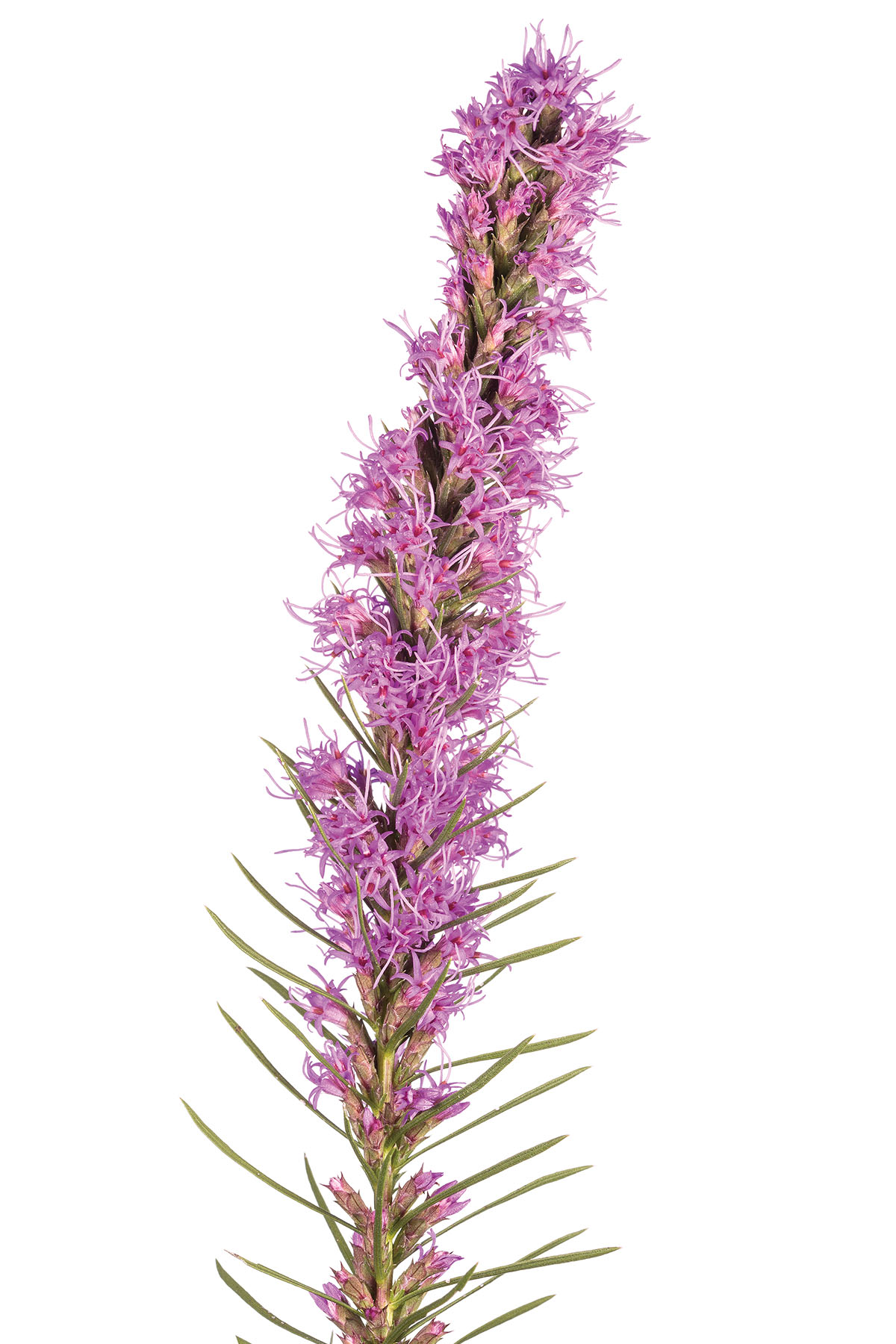 16
Gayfeather (Liatris spp.) blooms August to December in well-drained soils in prairies, plains, limestone glades, hillsides, and on the edges and open areas of woodlands. Also called button snakeroot because roots and underground stems have been used to treat rattlesnake bites, it is frequently visited by butterflies and hummingbirds; and goldfinches and other songbirds eat the seeds. 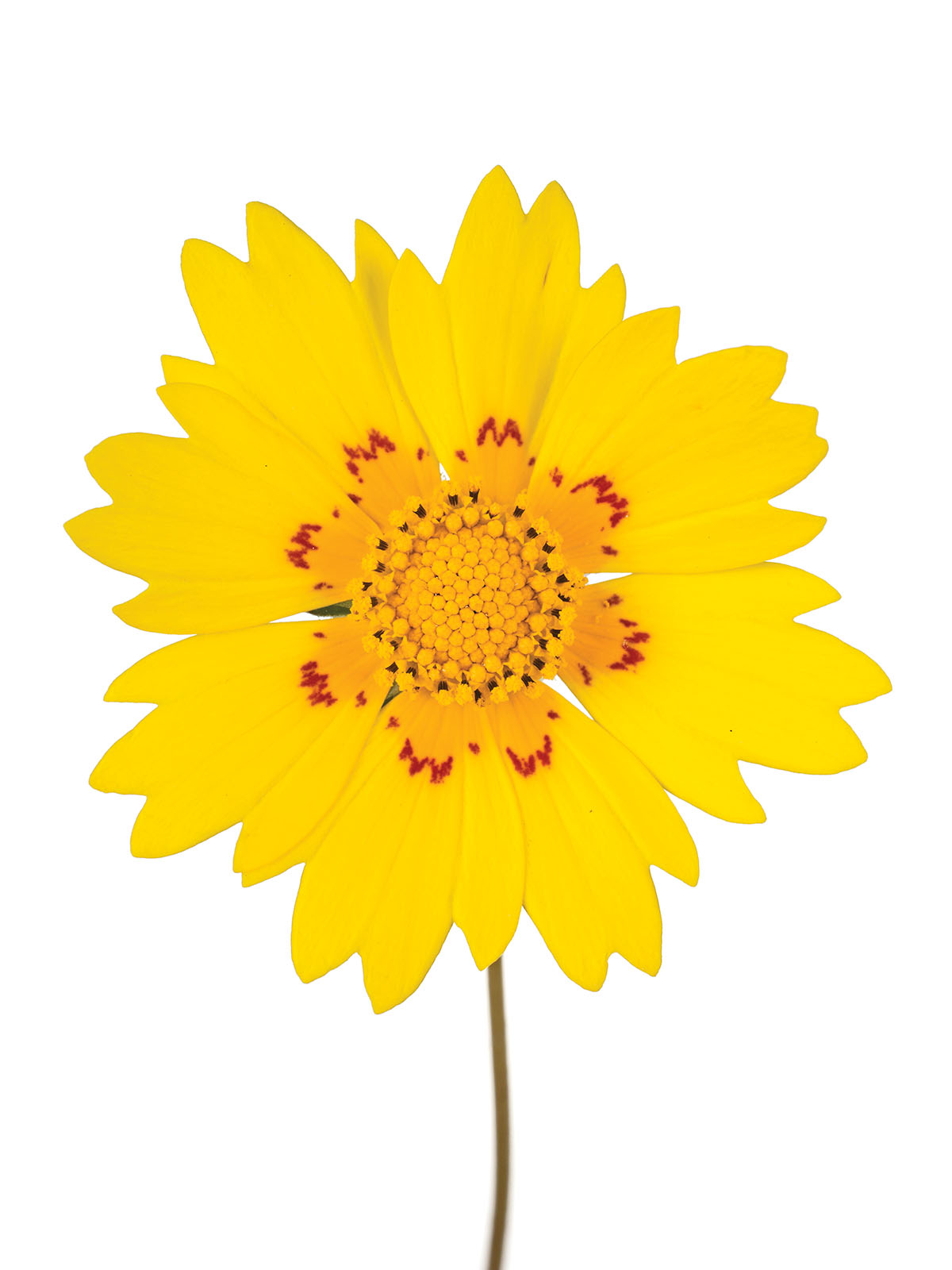 17
Coreopsis (Coreopsis spp.) bloom somewhere in the state every month except January. “Coreopsis” is from a combination of New Latin and Greek for “having a buglike appearance,” referring to the seed, which resembles a beetle—hence, the common name, tickseed. 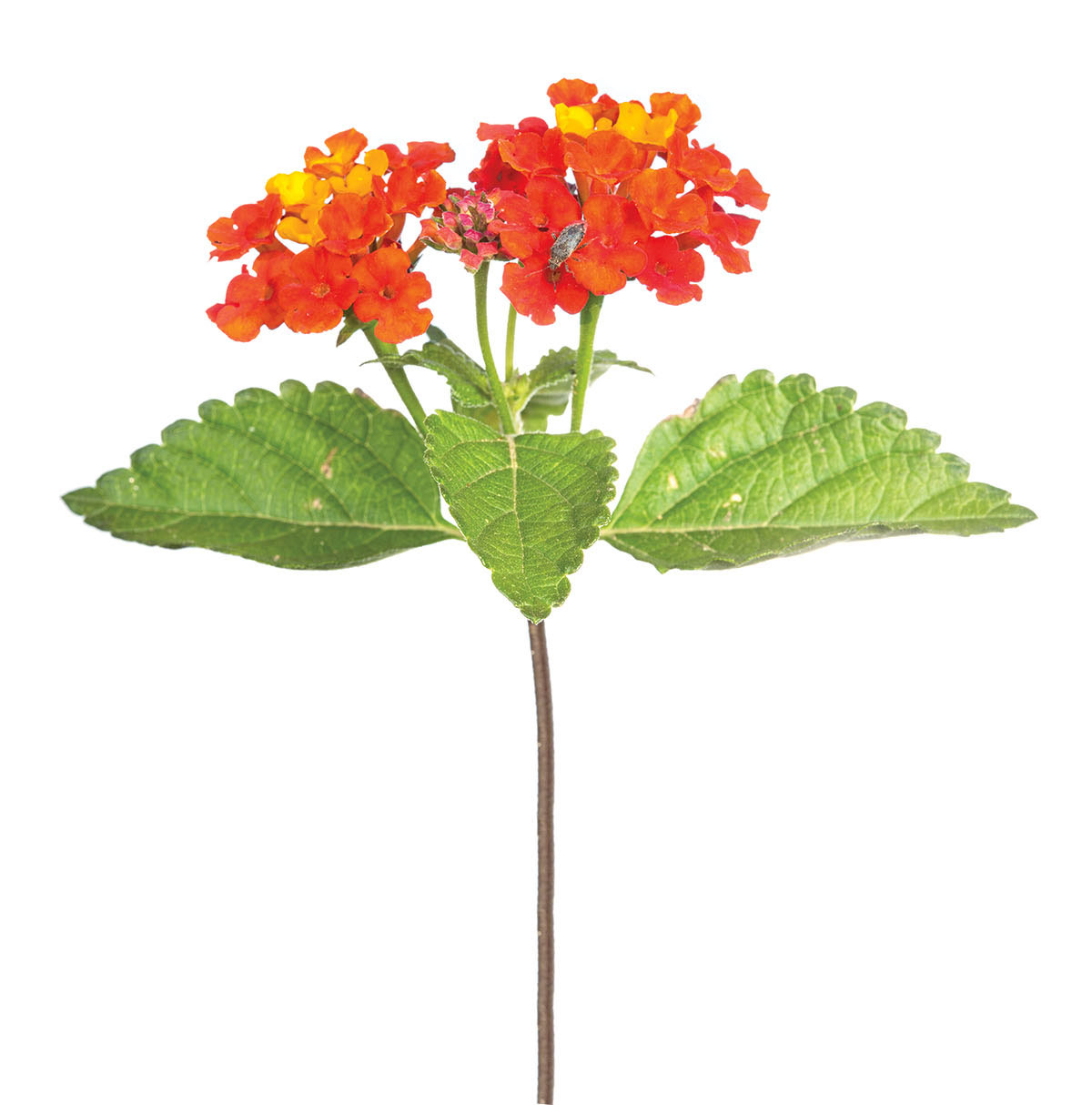 18
Texas lantana (Lantana urticoides or L. horrida) blooms nearly year-round in South Texas, April to October in Central and East Texas, and somewhat earlier in the Trans-Pecos. The “horrid” in its Latin name comes from the leaves’ distinctive pungent odor. Blooms are tight clusters of yellow, orange, and red flowers. 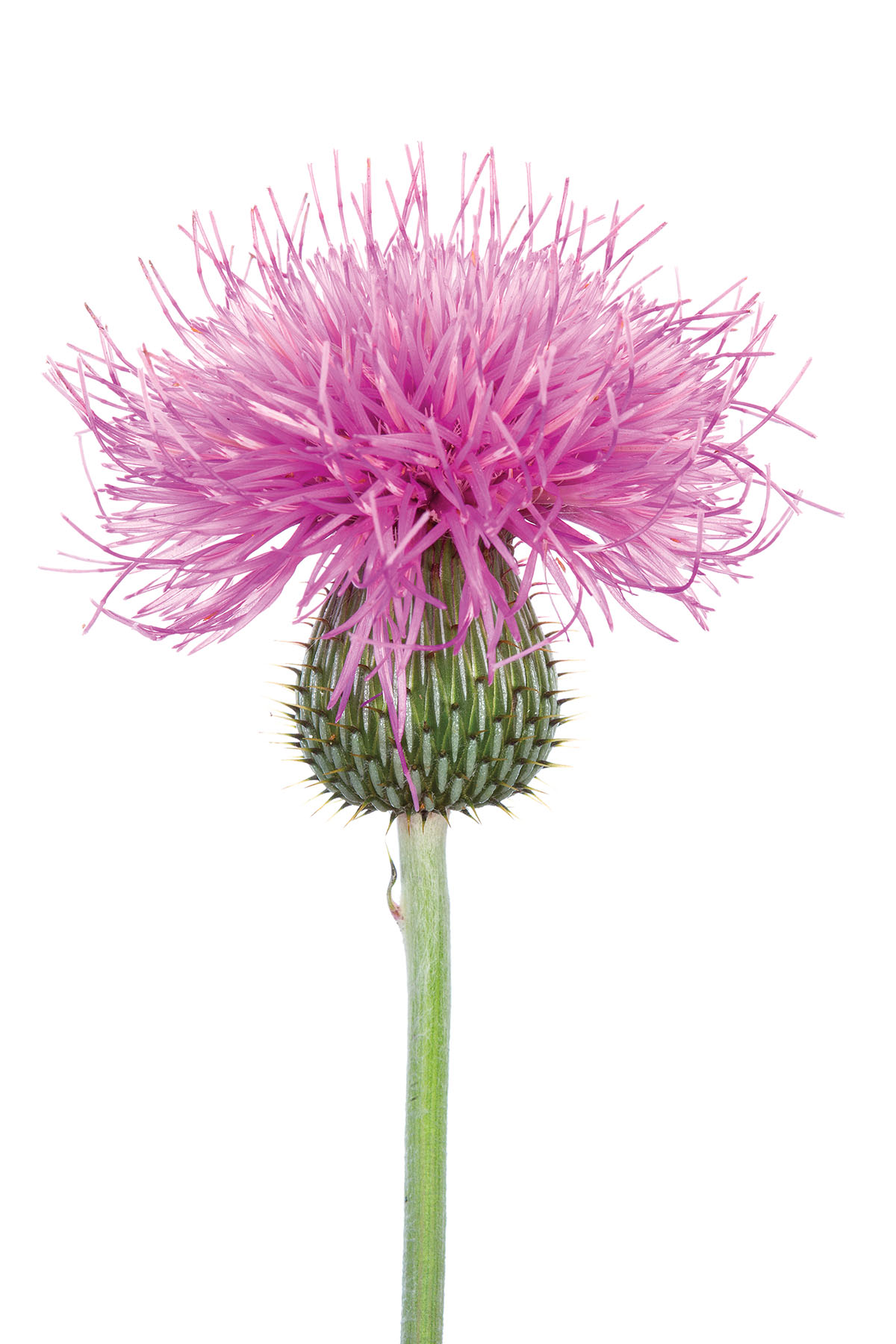 19
Texas thistle (Cirsium texanum) blooms throughout Texas, except in the Panhandle, April to August. Bumblebees and butterflies are attracted to Texas thistle. Goldfinches eat the seeds and line their nests with the fluff of the ripened seeds. 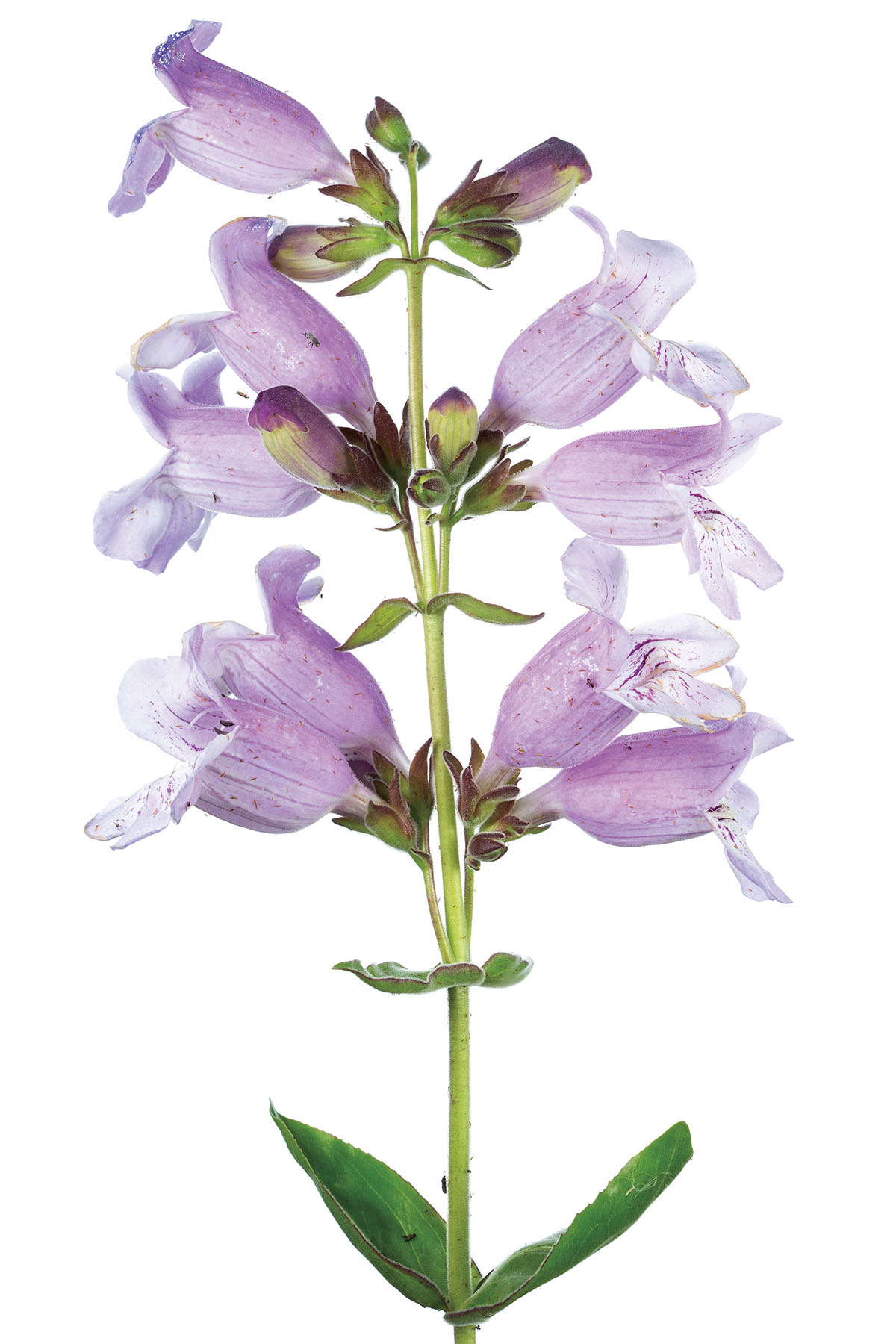 20
False foxglove (Penstemon cobaea) blooms in April and May across the rolling plains and Blackland Prairie south to the Gulf of Mexico. Also known as prairie penstemon, this showy flower grows best in sandy or rocky open hillsides, limestone outcrops, and loamy soils. 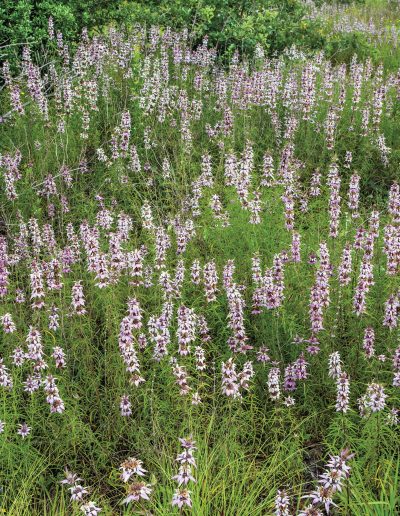 Spotted beebalm (Monarda punctata) blooms May through August. This tall erect annual or biennial thrives in sandy or rocky pastures, prairies, plains, and meadows throughout Texas. Also called lemon-mint, horsemint, and wild bergamot, the genus was named in honor of Spanish writer and physician Nicolás Monardes (1493-1588), whose work introduced much of Europe to such American plants as balsam, coca, corn, passionflower, potatoes, sarsaparilla, sunflower, and tobacco. Photo: Steven Schwartzman 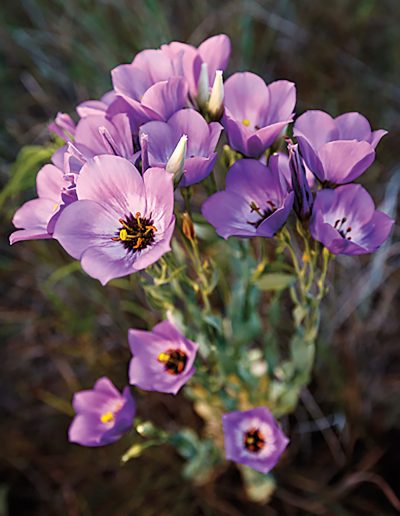 Texas bluebell (Eustoma exaltatum) blooms June to September in moist areas in fields and prairies, and in drainage areas, except in the Big Bend region. Bluebells have virtually disappeared in many locations because of indiscriminate picking. One of the state’s loveliest flowers, an entire field is stunning. Flowers range from bluish-purple to white, or white with tinges of yellow or purple. It’s sometimes called prairie gentian and lira de San Pedro (Saint Peter’s lyre). Photo: Sean Fitzgerald 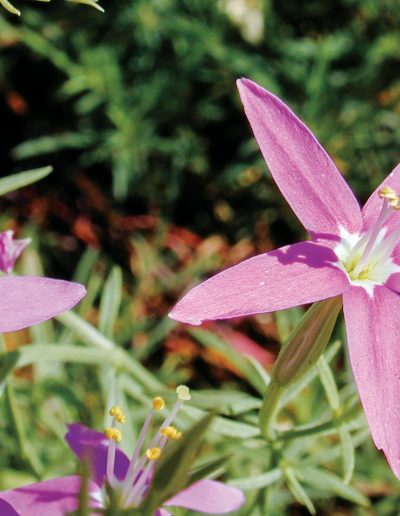 Mountain pink (Centaurium beyrichii) thrives on the barren, gravel-strewn hills of Central Texas and westward. The flowers, which bloom May through August, branch to form a nearly perfect bouquet. Called quinine weed by pioneers, the plants were dried and used to reduce fevers. Photo: Joseph A. Marcus 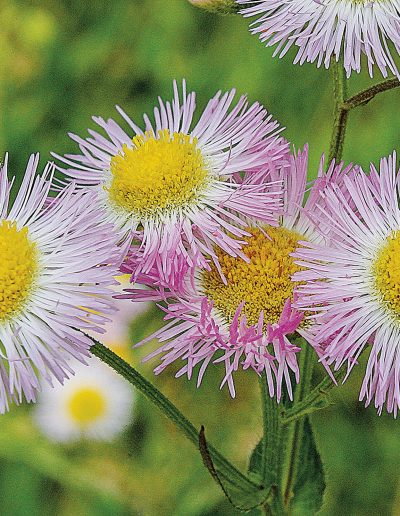 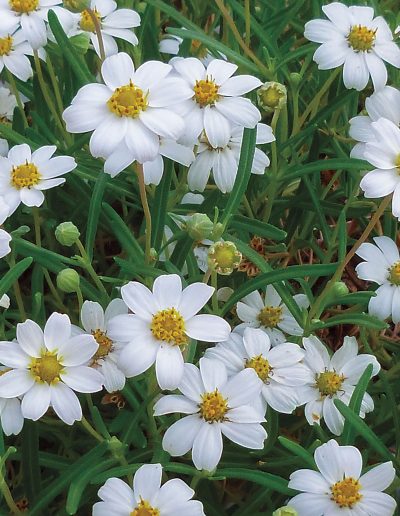 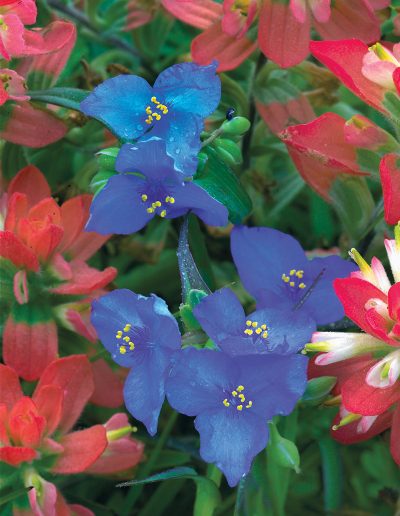 Spiderwort (Tradescantia spp.) blooms statewide February through June. Spiderworts were named for John Tradescant the Elder (1570-1638) and John Tradescant the Younger (1608-62), both of whom were English royal gardeners. The Tradescants grew plants sent to them and collected by them in America. As a result, spiderworts are common in English gardens. Photo: Tim Fitzharris 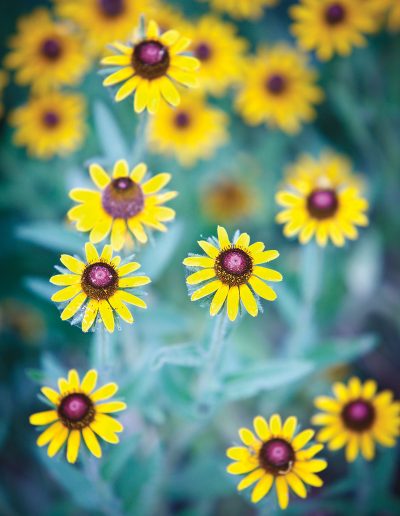 Brown-eyed Susan (Rudbeckia hirta) blooms May through September and is a prairie species found throughout the state. Renowned Swedish naturalist Carl Linnaeus (1707-78) dedicated the genus to two of his predecessors at the University of Uppsala, Olaus and Olof Rudbeck. Hirta means “rough” or “hairy” in Latin. Photo: Sean Fitzgerald 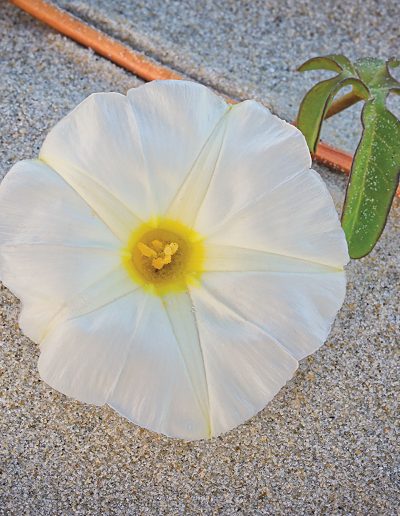 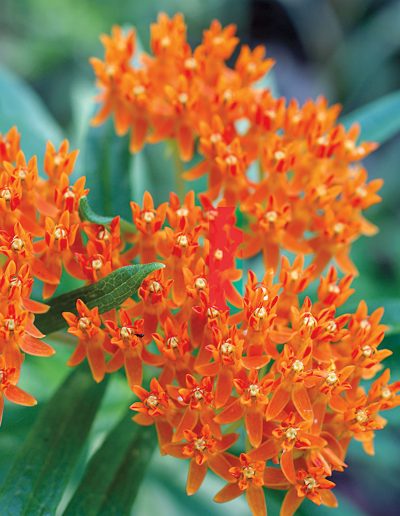 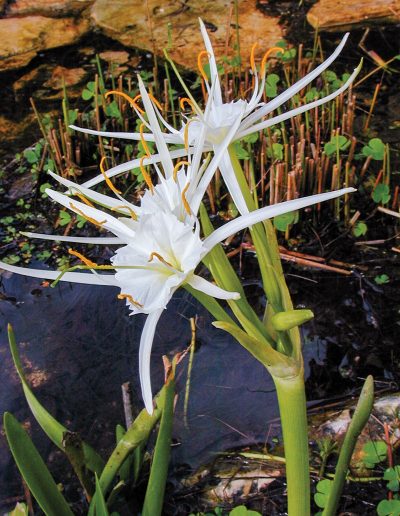 Texas spiderlily (Hymenocallis liriosme) blooms March to May and prefers swampy or other moist bottomland, banks of streams, and ditches along the Gulf Coast and in East Texas. The plant can grow 40 inches tall. The elegant varietal gets its genus name from the Greek kallos, meaning “beautiful,” and hymen, which means “membrane. Photo: Joseph A. Marcus 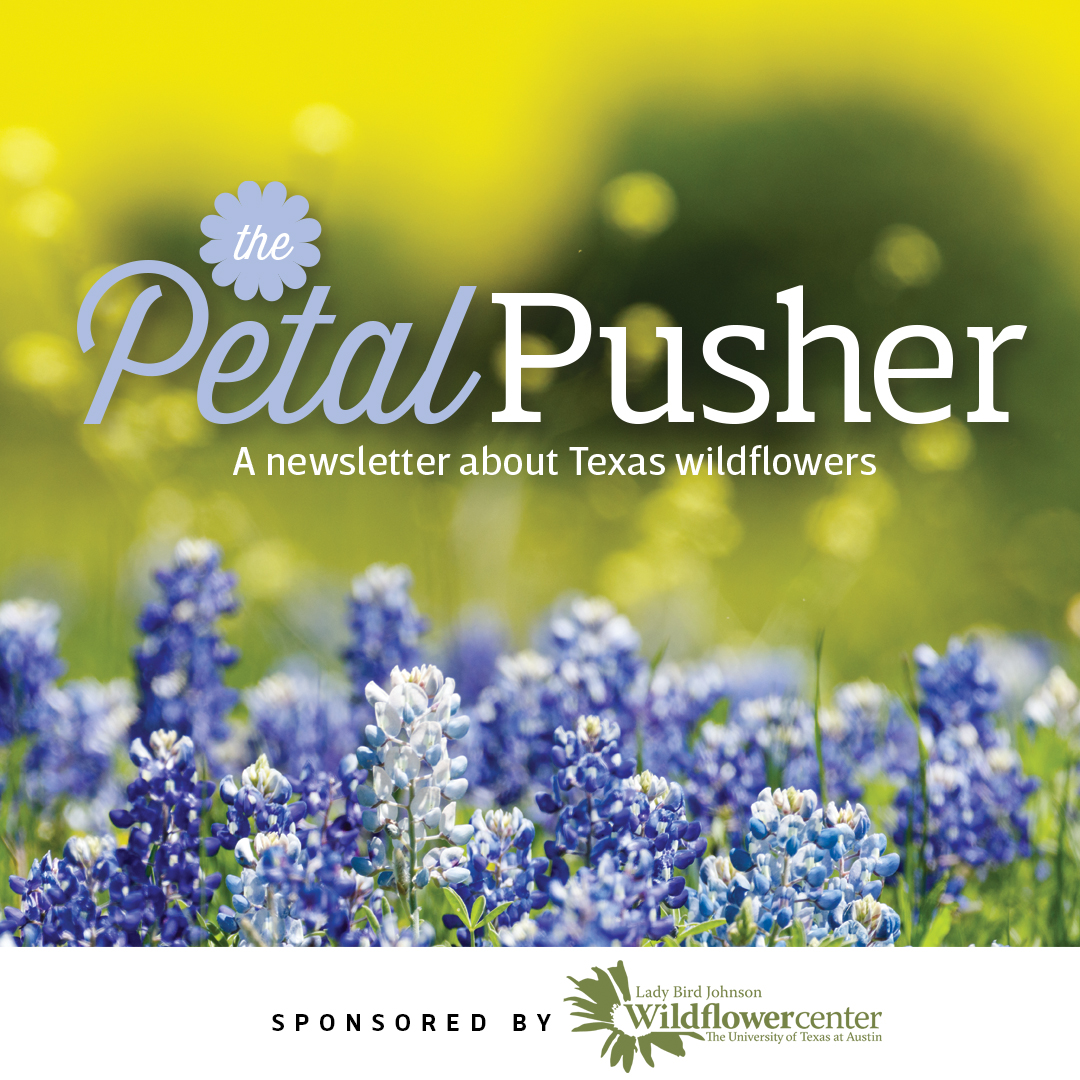