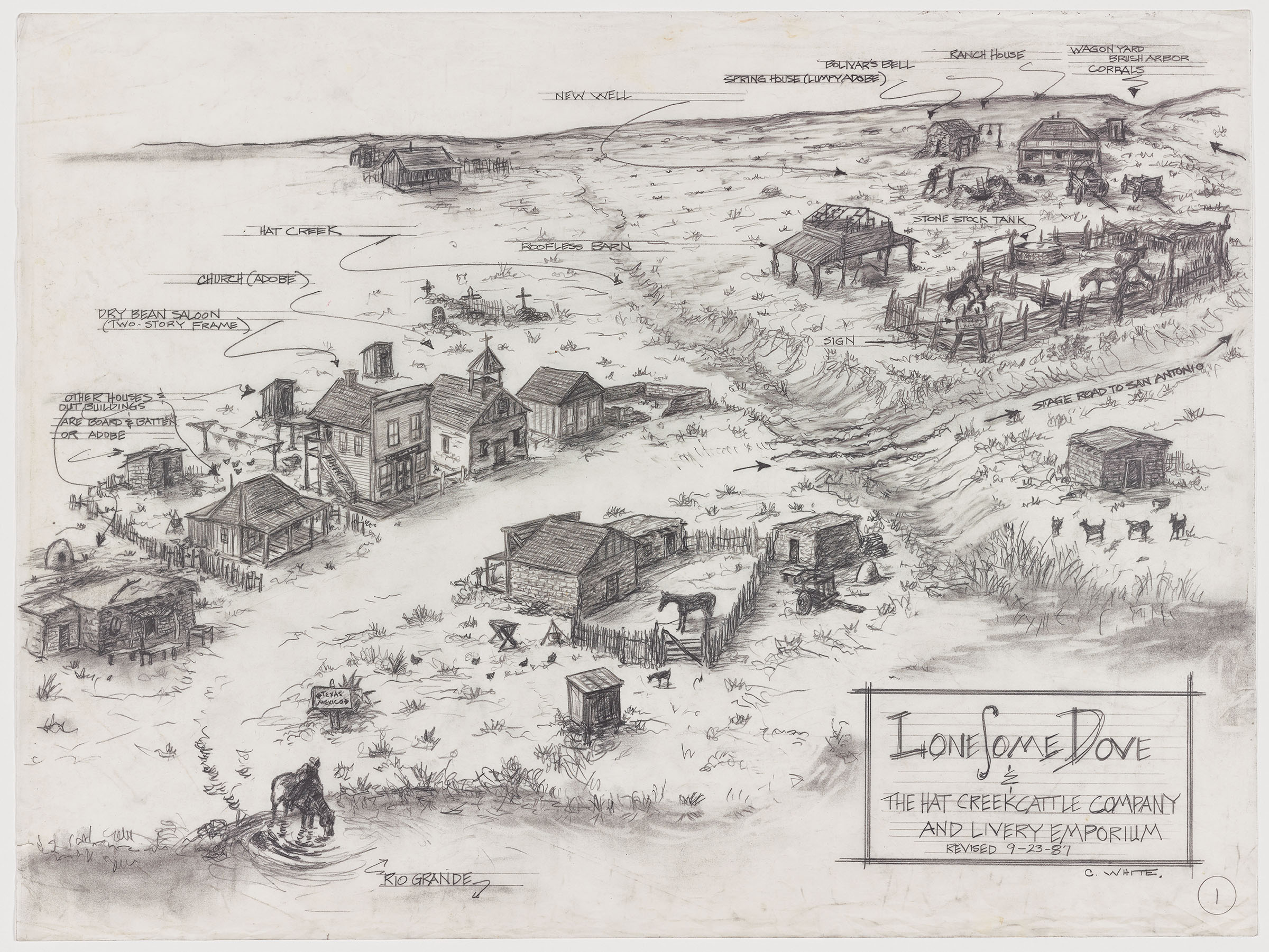 Behold the town of Lonesome Dove in its idea phase, before it became the set for the eponymous 1989 miniseries based on the book by Larry McMurtry. Art designer Cary White sketched this drawing in the office of Bill Wittliff, the esteemed Texas photographer and screenwriter for Lonesome Dove and various films. The drawing is part of the Wittliff Collections at Texas State University, a repository of work by writers, songwriters, and photographers, founded by Wittliff in 1987. Today, the collection is one of the country’s most respected archives of material on Southwestern culture.

Wittliff passed away in June 2019. In his memory the inaugural Wittliff Collections Festival is scheduled for Jan. 9. The daylong event will take place at the W Hotel in Austin, followed by a gala at the Moody Theater, home to Austin City Limits. Panel discussions will feature, among other creatives, writers Lawrence Wright and Stephen Harrigan, photographer Keith Carter, and visual artist Kate Breakey, plus assorted filmmakers and singer-songwriters. A reproduction of White’s sketch will be one of many items auctioned off with proceeds benefiting the Wittliff Collections. (Update: Due to COVID-19, the panel discussions have been moved to Nov. 14 and the gala to Dec. 2.)

White has thought a lot about this drawing, the original of which is on display in the new Lonesome Dove exhibition gallery at the Wittliff. “When we scouted the Rio Grande on the Moody Ranch, outside of Del Rio, we found this perfect spot on our first try, and that’s where we built the town,” he says, adding that the location was ideally situated on the tip of a bend, which allowed for the river to be seen in almost every shot.

“The one big place where I took some artistic license with McMurtry’s story was building a bridge over the arroyo known as Hat Creek,” says White, who is currently working on the Paramount TV series Yellowstone. “I was amazed that the producers didn’t object to the expense of building this bridge because our budget with everything on the show was so tight. I certainly was happy that we did build the bridge because it was such a strong visual element. The cowboys riding across the bridge at sunset is one of the most iconic shots in the show.” For more information, visit wittliffcollectionsfestival.com.