Written by Art Williams, Photographs by Will van Overbeek | From the May 2016 issue | Updated: October 28, 2018 | Filed Under: Culture 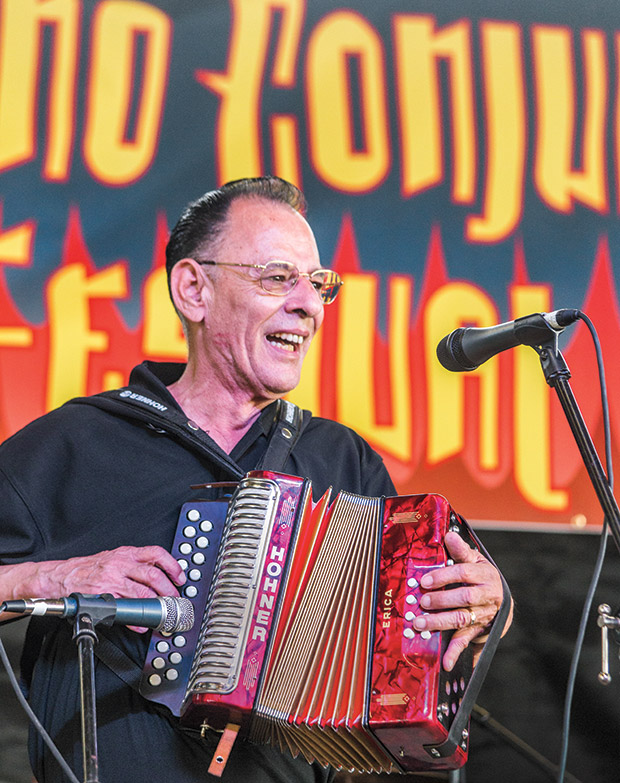 In these modern times, the words “music festival” make me think of Jumbotrons and multiple stages, $225 wristbands and the Foo Fighters. There’s none of that at the Tejano Conjunto Festival, a celebration of Tex-Mex accordion music that started in San Antonio in 1982 and maintains an old school feel as it enters its 35th year this May.

The 35th annual Tejano Conjunto Festival in San Antonio is May 11-15 at Rosedale Park, 303 Dartmouth St., and the Guadalupe Theater, 1301 Guadalupe St. A festival pass covering three days of music at Rosedale Park is $40, while a one-day ticket costs $12 to $15.

The festival, taking place May 11-15, is held in a no-frills pavilion in Rosedale Park on the West Side, with beer, food, and souvenir booths. So even though Tejano Conjunto fest was the first festival to feature conjunto music and presents the top names of the genre every year, it’s more of a baile than a blowout.

The setting is just right for the members of “Table 99,” about two dozen conjunto maniacs from Houston who trek to San Antonio each May for the dancing and camaraderie. Their tables are usually next to the Polka Dawgs, a “rival” dance club from San Antonio. “We’ve got our colors on,” jokes Forrest Armstrong of Table 99, whose members wear custom shirts embroidered with the club’s name. “But we’re all friends.” How could there not be an affinity among couples that drive hundreds of miles to dance for hours and hours?

“We attend dances and festivals all over South Texas,” says Armstrong, “and the Tejano Conjunto in San Antonio always has the top performers. And then if you can’t get enough, there are festival parties at local nightclubs.”

The daytime activities of the event, sponsored by the Guadalupe Cultural Arts Center, include a seminar on accordion tuning and repairs, showcases of youth accordionists, and a senior citizens dance. The Arts Center hosts the activities at its 376-seat indoor Guadalupe Theater, built in 1942 and wonderfully restored. 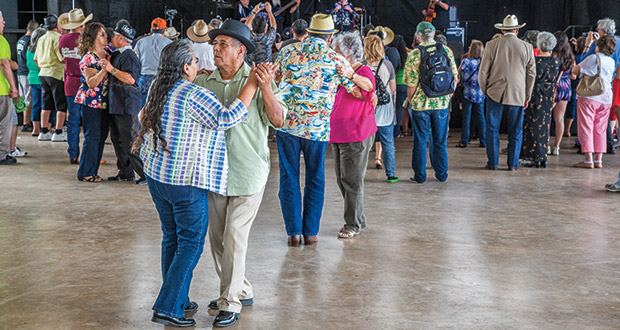 Conjunto music is the fusion of German polkas, introduced to Texas by Czech, German, and Polish settlers, and Mexico’s 12-string bajo sexto guitar. It’s a musical form born in Texas dance halls in the late 1800s, with the primary purpose of filling the wooden floors with hard-core dancers.

“You can’t separate the dancing and the music in conjunto,” says Juan Tejeda, who founded Tejano Conjunto fest in conjunction with the Guadalupe Cultural Arts Center. At Rosedale Park, the festival crowd readily fills the large concrete dance floor, which is shaded by a metal awning and surrounded by picnic tables and oak trees bearing their bright green leaves of May.

Although “Tejano” is an umbrella term that covers Tex-Mex music, accordion-fueled conjunto is the focus of Tejeda’s musical booking. “The main requirement to play the festival is that you have an accordion in the group,” says Tejeda, a music instructor at Palo Alto College. Some of the more progressive bands use synthesizers and electric bass for a fuller sound, but at the core is the squeezebox.

Honoring the heritage of conjunto music is a primary theme of the festival. “There’s a formula to the booking,” says Tejeda. “First of all, we’ve gotta bring in the legends who are still alive. Then, of course, we try to book the most popular acts.” Also, the festival inducts musicians each year into its Conjunto Music Hall of Fame.

Several performers on the bill for 2016 have already been inducted, among them Flaco Jiménez, the legendary San Antonio accordionist known partly for his crossover work with the Texas Tornados; Boni Mauricio y Los Maximos, from Corpus Christi; and Eva Ybarra, a San Antonio accordion master known as “The Queen of Conjunto Music.” 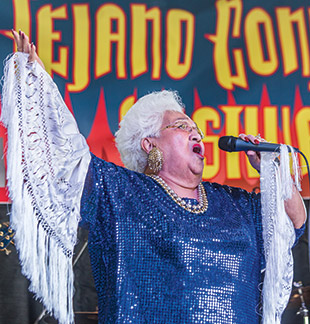 Bands from South Texas make up most of the schedule, such as Los Texmaniacs, a San Antonio group that won the Best Tejano Album Grammy Award in 2010, and Los Fantasmas del Valle and Los Monarcas de Pete y Mario Diaz of Houston. But other regions are also represented. This year’s performers include The Hometown Boys, from Lubbock, and all the way from the Netherlands, Dutch phenom Dwayne Verheyden, perhaps the only Tex-Mex accordion virtuoso in his home country.

Tejeda also works to book new acts that have never performed at the Tejano Conjunto Festival. Fresh faces this year include Conjunto Cats from Seguin, Los Nuevos Chachos de Jesse Gomez from Mission, and Conjunto Delta Boyz of Elsa. Tejeda’s budget for talent is only $30,000 for three full days of music, so there’s a balance between established acts who command greater fees and new acts who play the fest
for exposure—a proud achievement in the industry.

During the early 1990s, when Selena’s rise spiked the popularity of Tejano, the festival expanded and used multiple stages, but these days it’s back to the simpler one-stage setting—a format that Tejeda prefers because fans can catch all of the bands.

“It’s a relatively small festival,” says Tejeda, “but the impact has been pretty huge when you think about all the unknown acts who started out here. In May, San Antonio becomes the center of the conjunto universe for all of the United States, and increasingly Mexico and other parts of the world. We’re very proud of that. We were the first festival dedicated to conjunto music and we’re still going strong.”