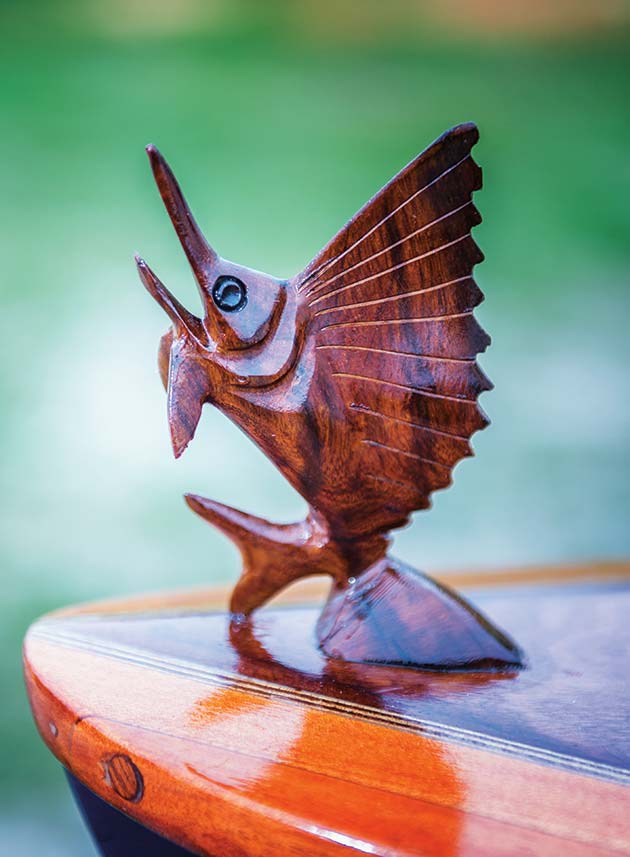 Inside a historic boat barn in Port Aransas, a small group gathered around a newly built wooden skiff to sign their names on the underside of the boat’s last unfastened floorboard.

Sawdust shivered on the lumber, work surfaces, and tools piled high on the surrounding shelves: clamps, tape measures, levels, saws, hammers, drills, and buckets of brushes. With the final signature complete, the builders attached the floorboard with screws and glue, completing an age-old tradition that marks the end of a boat’s construction and the beginning of its seaward life.

One hundred years after Farley Boat Works constructed its first wooden boat in Port Aransas, the tradition of boat building continues at the island workshop. I joined my parents for part of their recent guided boat-building experience—the construction of their own shallow, flat-bottomed boat, 16 feet long and 4 feet wide, which they christened The Lizabelle, a nickname of my mother’s.

Shuttered for decades, Farley Boat Works reopened in 2011 as an extension of the Port Aransas Museum. The workshop’s boat-building classes represent a new chapter for this relic of Port Aransas history—part educational workshop, part museum, and part community center.

In addition to guiding novice boat-builders through projects, the Boat Works offers classes on various aspects of making and using boats—from basic woodcarving to using epoxy resin, navigation rules, and rowing. The workshop also welcomes visitors who want to drop by and watch the boat-building process while learning about Farley Boat Works’ history through guided tours of the shop and vintage boats stored nearby. Old fishing nets hang from the ceiling, and a montage of pictures on the wall recounts Farley’s storied past.

“Farley Boat Works is one of the things that made Port Aransas what it is,” said Barney Farley III, grandnephew of the company’s founder, noting other significant cornerstones of Port Aransas’ development, such as the jetties, the ship channel, the Coast Guard, and The Tarpon Inn.

Farley Boat Works traces its history to 1910, when 16-year-old Barney Farley arrived in Port Aransas from Florida. He had traveled to Port Aransas—located on the 18-mile barrier island known as Mustang Island—to visit relatives. The small island town was flourishing at that time, having recently completed construction of its stone jetties, and it was growing as a popular destination for sport fishermen. Anglers from across the country came in hopes of snagging tarpons, the “silver kings” measuring four to eight feet and known for their ferocious fight and shiny scales. As a fishing enthusiast, young Barney Farley had found his place.

He went to work as a deckhand for J.E. Cotter, a fisherman whose family owned The Tarpon Inn, a former military barracks first built in 1862 and rebuilt after hurricanes in 1916 and 1919. Nowadays, more than 7,000 tarpon scales adorn The Tarpon Inn’s lobby walls like dried rose petals, each signed by its angler. There’s even a yellowed scale signed by President Franklin D. Roosevelt, who on a 1937 excursion aboard a Farley boat caught a 77-pounder just beyond the jetties.

In 1914, Barney wrote to his older brother, Charles Frederick “Fred” Farley, a woodworker, urging him to come to Port Aransas and build boats suited for the fishing industry. Fred made the move, and in 1915, he started Fred Farley and Son Boat Building. (The name was changed to Farley Boat Works in the 1960s.) 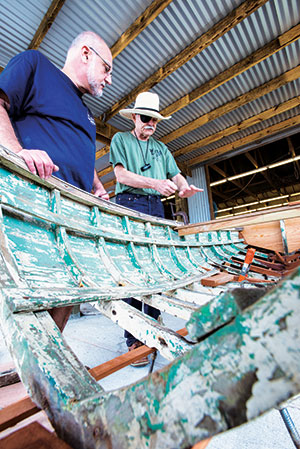 Through storms and changing times, fishing became the industry Port Aransas held onto, and the Farley family built the boats. Fred modified existing designs to make boats that were bigger, safer, and drier than the town’s ubiquitous fishing skiffs. Farley’s first boats were 20-foot motorboats, powered by engines from Model Ts and other automobiles, with manual transmissions. In the early days, Fred and his boys, Jim and Fred Jr., proved themselves adept at making things work.

“The very first boat had some kind of automobile engine in it. They literally had to grind the gears to get it going, working the RPM [revolutions per minute] up and down, and finally it would go into gear,” said Pat Farley, Barney Farley’s grandson, who now owns the Silver King jewelry shop in town.

To combat the strong winds and rough waves off of Mustang Island, Fred created a bow that was designed to navigate the seas with more stability. Unlike typical skiffs, which had sides that angled out, the Farley tarpon boats had low sides and a rounded tumblehome design that angled in, making it easier for the captain to land a heavy fish without a deckhand. Farley Boat Works grew with the sport fishing industry in the 20th Century, and the boats evolved in shape and size as anglers went farther offshore. Designed specifically to take anglers past the jetties, the Farley’s tarpon boats ushered in a new era of sport fishing in Texas.

Despite their success, however, time brought change. With the advent of fiberglass boats, wooden boats became obsolete, and in 1972, Farley Boat Works closed its doors. But the memory of the company and its place in Port Aransas history lived on.

In 2004, the Port Aransas Garden Club began selling concrete Farley Boat planters as a way of honoring the bygone company. The club has sold about 175 of the six-foot, 1,800-pound planters over the years. Often painted in vibrant colors and filled with flowers, the planters can be found all over town, including at the Ellis Memorial Library, the South Jetty Newspaper building, and in residential yards.

Elements of Farley history are also on display at the Port Aransas Museum, which chronicles local history with photos, artifacts, and revolving exhibits. The museum displays two small Farley boat models, as well as a restored back half of a Farley boat that’s similar to the one that President Roosevelt fished from in 1937. Visitors can take photos of themselves sitting in the boat’s chairs, with an image of Roosevelt holding a silver king as the backdrop.

In 2011, the Port Aransas Preservation and Historical Association bought and restored Farley’s old barn as an extension to the museum, preserving its history while renewing the boat-building initiative. What newcomers discover is that the craft is much like working a puzzle; each piece, from the stem to the transom, is uniquely shaped and must fit perfectly. Building a boat at Farley doesn’t require previous woodworking experience, but curiosity and commitment are important. Typically, it takes about two months to build a boat. When my parents built The Lizabelle—a “cocktail cruiser” that they use for motoring around the canals of Rockport and for fishing and picnics in the bay—they were able to partake in something they’d always wanted to do in a place that had historical significance.

The boat-building workshops and classes are a prelude to what Frank Coletta, Boat Works manager, hopes will be the addition of a new Maritime Branch for the Port Aransas Museum next door to the factory shop. In addition to exhibits of historic Farley boats, the expansion plans call for new classrooms. The Boat Works is in the early stages of fundraising for the $500,000 project. Coletta is also working to attract a broader audience for its guided workshops by working with customers to build other watersport vessels, such as paddleboards and trimarans.

In the meantime, Farley Boat Works is reestablishing its place in the Port Aransas community. On the second Saturday of every month, the workshop hosts a potluck party for the public. A couple of months after The Lizabelle was finished, my family returned to Port Aransas for the occasion. Outside, skiffs made at Farley Boat Works were displayed on the lawn. Some were unadorned; others were painted bottle green and crystal blue, like washed-up sea glass.

In the workshop, volunteers with cold beers chatted around new boat designs. That night, the Boat Works community once again welcomed my family and asked after our boat like it was their own child. A few weeks before, The Lizabelle had taken her maiden voyage, slipping into Texas water for the first time. She was newly painted, a deep navy blue with a red stripe and shiny gold lettering on the transom. In the years to come, this Farley boat will be linked to its birthplace, a home that’s been resurrected and reimagined as it carries the Port Aransas boat-building tradition forward.