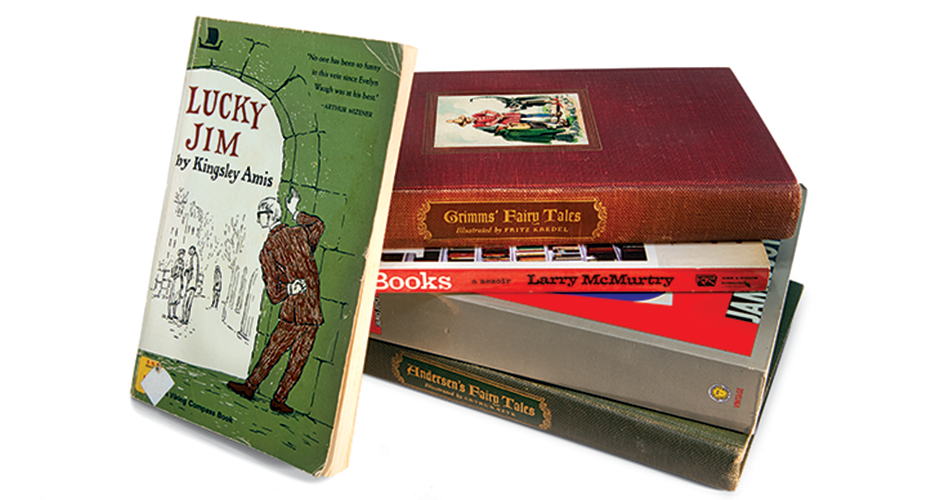 Wherever I travel, I seek out independent bookstores. They help define a city’s character for me. That said, I don’t collect books. I don’t seek out first editions, limited-edition autographed copies, or obscure European folios. I buy books simply to read them, and I love reading more than almost any other activity in the world.

What’s on your shelf? 10 Books Every Texan Should Read

And to me, books are sort of a biographical timeline—not just about what I’ve read, but in many cases, where I’ve been.

Take, for example, my copy of Ulysses, by James Joyce. I remember buying it several years ago at Book People, Austin’s celebrated independent bookstore, before heading east to Marshall to take part in a Bloomsday event. (Bloomsday, June 16, is an annual celebration of the protagonist of Ulysses, Leopold Bloom.) I read pages of the tome on each of Book People’s bustling sales floors, trying to tap into the right kind of inspiration for tackling Joyce’s literary experimentalism. In the end, I’m both proud to have finished it and happy that I never have to read it again. More important, perhaps, seeing it on my shelf always reminds me of my trip to Marshall.

One of my favorite small bookstores in Texas is Berkman Books in Fredericksburg. It’s a tidy store on East Main Street run by David Berkman, who is forever sorting, cataloguing, and replenishing his stock. There are several rooms filled with used books of all genres, and a quaint German antiques store in the back. On one trip, I simply couldn’t leave without purchasing a volume of stories by the Brothers Grimm. I found the book’s colorful cover and illustrated endpapers as enchanting as the stories themselves. (Sitting next to it was a companion book by Hans Christian Andersen, which I just had to have, too.) Whenever I read through these books today, I am taken back to the fairy-tale look and feel of downtown Fredericksburg, with its gothic churches and mid-19th-Century architecture reminiscent of medieval Europe.

As odd as it may sound, when I spy my paperback copy of the novel Lucky Jim, I think of Denton. Written by the witty satirist Kingsley Amis, Lucky Jim concerns a bumbling history teacher living in provincial England during the 1950s; I found my copy at Recycled Books, a converted opera house on Denton’s town square that carries more than 300,000 books. (You don’t need luck to find something great at Recycled Books; you just need stamina.) Whenever I’m in town, I set aside a couple of hours to peruse the store’s three floors. Befitting Denton’s reputation as one of Texas’ great music towns, Recycled Books also deals in albums, CDs, and even 8-track tapes.

Houston has several terrific independent bookstores, including Katy Budget Books (in the nearby suburb of Katy), which sells new and used books. It’s been around for decades and always features a good selection of Texana. A good place to bring kids thanks to its extensive children’s section, Katy Budget Books also hosts regular activities for young readers.

But among my all-time favorite Tex-as bookstores is Brazos Bookstore, in Houston’s West University neighborhood. Unlike Recycled Books, Brazos sells new books, and despite being around since 1974, it features a decidedly modern look with clean lines and white-painted bookshelves. When I pop into a bookstore like Brazos, sometimes I search for titles by local authors or about local subjects, and oftentimes I just pick up a book that looks interesting. My souvenir from a recent visit was Books: A Memoir, by Larry McMurtry. Along with being one of Texas’ most famous authors, McMurtry is an avid book collector and bookseller. At one time, his Booked Up bookstore in Archer City comprised four buildings and 450,000 volumes. (In 2012, McMurtry auctioned off 300,000 books and closed three of the buildings.)

In Books, McMurtry tells of memorable book-buying trips and how certain books affected his life, and he also names some of his favorite bookstores. It was a serendipitous purchase, to say the least, and I’ll never forget that when I went to pay for it, Brazos’ manager, Jeremy Ellis, told me, “An excellent choice. You know, Larry McMurtry used to come in here all the time when he lived in Houston.”

Having read Books and visited Brazos, that doesn’t surprise me a bit.

Texas by the Book