When dinosaurs (and mammoths) roamed

Journey 100 million years through Texas’ past

Written by Art Williams, Photographs by Will van Overbeek | From the January 2015 issue | Updated: June 12, 2020 | Filed Under: TRAVEL 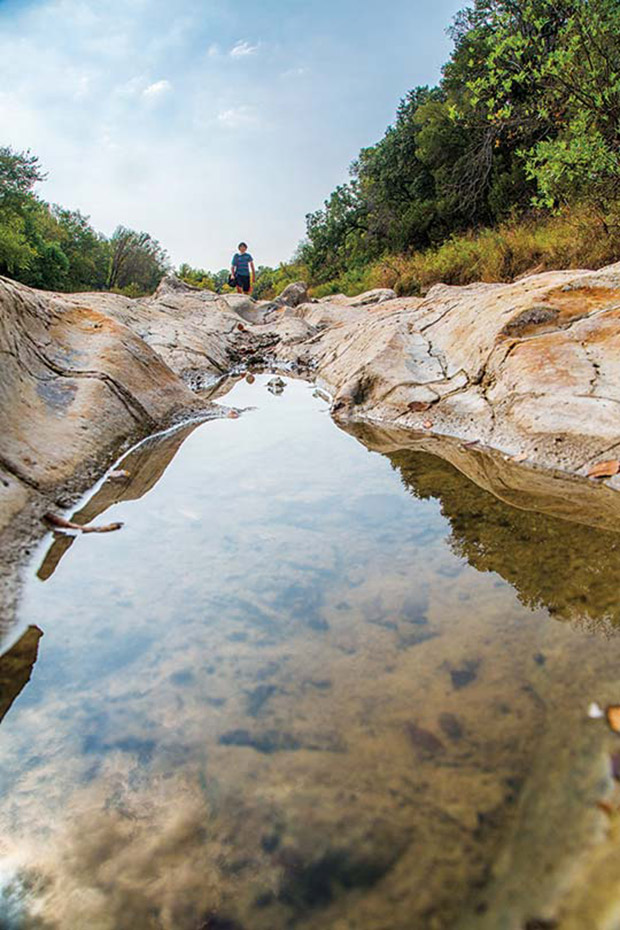 Curved tusks jut out of red sandy soil. Massive bones scatter around them in the prehistoric burial ground. These are the remains of Columbian mammoths, a rare “nursery herd” of mother mammoths and their offspring that lived about 65,000 years ago near what is now Waco.

Inside the Dig Shelter at the Waco Mammoth Site, my husband, Dan, and I stand on a viewing platform overlooking the excavation site. Natural light streams in from the windows, illuminating where the mammoth bones lie in situ—in position in the original place where they were found. A mural overlooking the dig site depicts how the mammoth herd may have looked in the Ice Age—the mothers touching their young with their trunks against the backdrop of an ancient river with groves of trees.

“They’re so well preserved,” Dan says, and I nod. I’ve only seen part of a mammoth tusk before, embedded in a creek near Glen Rose. That one appeared rough, ragged, and woody, like a giant root. These tusks looked like elegant spears of ivory.

Before this experience, I had viewed the remains of such prehistoric creatures in museum display cases. Peering through glass at the skeletons of ancient animals and then reading an exhibit description can be interesting, but also impersonal and passive. But standing so close to where the mammoths died, and seeing their bones just a few feet below, in the exact place they were discovered, is a different experience altogether. It feels vivid, even emotional—surreal in one sense and quite visceral in another.

Within a 70-mile drive, visitors can see the mammoth excavation site, a re-created shelter of some of the area’s earliest human inhabitants, and dinosaur tracks left in an ancient seabed.

That could describe the rest of the “prehistoric trail” between Waco and Glen Rose, as well. Within a 70-mile drive, visitors can see the mammoth excavation site, a re-created shelter of some of the area’s earliest human inhabitants, and dinosaur tracks left in an ancient seabed.

In Waco, the mammoths might have stayed buried if Paul Barron and Eddie Bufkin, two local teens, hadn’t been searching for arrowheads in a ravine near the Bosque River in 1978. Instead of arrowheads, they spied a leg bone sticking out of the ground.

The boys took the bone to Baylor University’s Strecker Museum, where experts identified it as belonging to a Columbian mammoth (Mammuthus columbi), an herbivore similar to the modern African elephant that became extinct some 10,000 years ago. 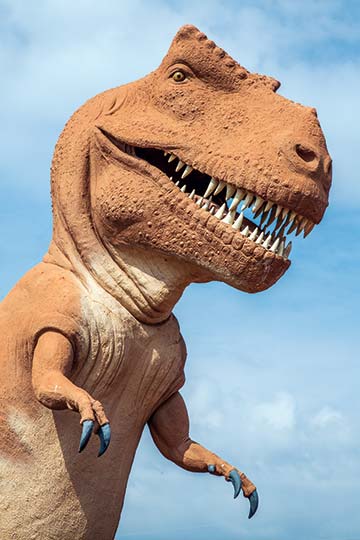 Museum staff, students, and volunteers soon returned to the ravine with brushes and bamboo scrapers and began a slow, careful process of excavation, eventually uncovering the remains of 16 Columbian mammoths. Later they found six more mammoth skeletons, along with the remains of a prehistoric camel and the tooth of a young saber-tooth cat.

After analyzing the remains, researchers have pieced together a hypothesis about how the nursery herd perished, and it’s tragic: As water from what is now the Bosque River flooded a steep-sided channel, a massive mudslide trapped them. Some experts think that the adult females formed a defensive circle around their young, became stuck in the deep, wet clay, and drowned standing up. (The other mammoth skeletons at the Waco Mammoth Site are believed to have died years later in another flood event.)

In 2006, interested citizens began discussing how to turn the site into a public park. The nonprofit Waco Mammoth Foundation took shape, and supporters raised some $4 million to build the viewing pavilion, accessible sidewalks, and a small welcome center and gift shop. The site opened to the public in late 2009, and today employees and docents lead guided tours of the site throughout the day.

Dan and I live in adjacent Bosque County on a ranch with several limestone overhangs. We’ve often wondered if ancient people ever used them as a shelter. Certainly some did elsewhere in the county, as proven by the 11,200-year-old Paleo-American archeological site known as the Horn Shelter.

To learn more, we drove 40 minutes northwest from the Waco Mammoth Site to Clifton, where the Bosque Museum showcases the Horn Shelter people and a re-creation of the famous Horn Shelter Man.

As archeologists Albert Redder and Frank Watt evacuated a shelter above the banks of the Bosque River in 1970, they discovered a burial site containing an adult male and a child. Douglas Owsley, an anthropologist from the Smithsonian Institution, examined the remains and concluded—based on the skulls and dental evidence—that the Horn Shelter people were likely not related to American Indian tribes.

The Horn Shelter turned out to be one of the rare Paleo-American sites to contain skeletal remains and burial goods—turtle shells, deer antler tools, bird and animal claws, coyote teeth, and bird eggshells. Not only does this indicate that the people had a concept of the afterlife, but the presence of so many items suggests a ritualistic burial, one that might have been afforded a shaman or other highly respected person.

At the museum, we peruse a replica of the burial site, which shows the man and a small girl draped in a deer skin, with a third person present in the background. Along with actual rocks and dirt from the site, reproductions of the burial goods also are on display, as is a bust of what the adult might have looked like, with sculpted high cheekbones being the prominent feature. The remains and original artifacts have been placed for safekeeping and research at the Smithsonian. 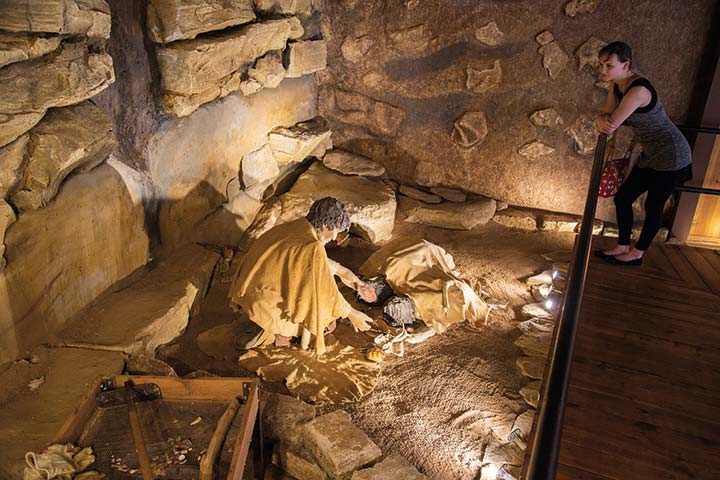 The representation of the Horn Shelter Man looks so real that it startles me. How did this ancient Bosque County resident get to this part of the world, I wonder? Anthropologists are still searching for the answer. Some scientists have hypothesized that since the man’s skull resembles that of the Ainu people of northern Japan, perhaps he was part of a group that made their way here during the Ice Age, perhaps on a boat or via an ice float. The Smithsonian is currently working on a complete genome of the skull, which may provide answers in the future.

We drive deeper into Texas’ pre-historic past as we leave Clifton, turn off Texas 6 at Meridian, and head north on Texas 144 toward Glen Rose.

Longtime friends Carl and Gayle from Dallas join us for an excursion at Dinosaur Valley State Park, a National Natural Landmark where, some 113 million years ago, plant-eating creatures called sauropods left their saucer-shaped footprints in the soft mud of what is now the Paluxy River bed. We grab a map from the visitor’s center and head to the major track sites.

Gayle, Carl, and I climb down a flight of steep rock stairs to the riverbank, then hop across boulders to the other side of the Paluxy. The tracks make a trail between the boulders, in the shadow of the riverside cliffs.

“Look at that!” Carl exclaims, pointing to a three-toed track. “It’s really clear.”

Adults and children alike climb over the rocks, looking for tracks and exclaiming when they find them. A local boy, nine-year-old George Adams, is credited with finding the three-toed tracks in 1909. Around the same time, a moonshiner named Charlie Moss discovered more tracks while looking for his still. Then, in 1937, Ronald T. Bird, a paleontologist with the American Museum of Natural History in New York, visited Glen Rose and made his big discovery of a sauropod trackway.

Recent paleontological analysis has suggested that this sauropod was not—as previously thought—a member of the species Paluxysaurus jonesi, the state’s official dinosaur, but rather a related species, Sauroposeidon proteles. An herbivore, the Sauroposeidon weighed 20 tons, stretched 60 to 70 feet, stood 12 feet tall, and used its 26-foot-long neck to help it reach food.

Travelers could expand on our prehistoric trail trek with visits to other nearby museums, including the Bell County Museum in Belton, which houses exhibits about the excavation of Clovis-culture people at the Gault Site; the Mayborn Museum Complex in Waco, which uses interactive exhibits to tell the history of the Tertiary Period; the Fort Worth Museum of Science and History, which presents full dinosaur models, including a partial re-creation of Paluxysaurus jonesi; and the amazing displays at Dallas’ Perot Museum of Nature and Science.

But we’re content to explore the prehistoric world closer to home, where the rocks of ages have so many stories to tell.