A family of hatmakers at Bryan’s Catalena Hatters 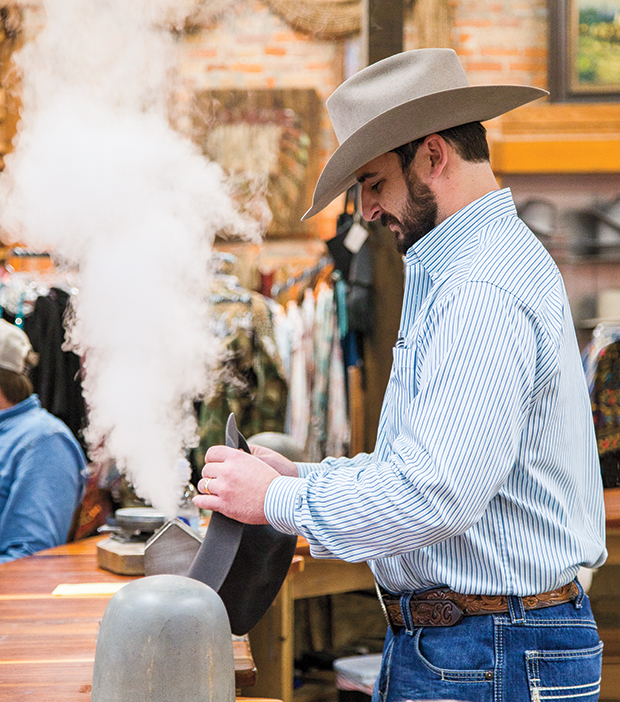 Scott Catalena forms a hat brim as steam pours out from the hat bar at Catalena Hatters.

A customer walks into Catalena Hatters looking for a special hat to match the one his friend never takes off his head, presenting a photo from his cell phone as a challenge to the hatmaker.

Looking at the customer’s cell phone photo, Scott Catalena makes a quick assessment. “That’s an Atwood Straw; that means he likes a short crown,” he says, getting all the necessary details to complete the order.

Another customer reminisces about the dancing of his youth while his black felt hat gets a quick tune-up. “I still kick a little bit,” he boasts. “I like my Tejano music.”

Scott smiles, gives the second customer’s hat a good brushing, then holds it over the steam bubbling out of one of three steamers—they sound like tea kettles—mounted around the semicircle counter.

“I’ve got a lot of customers who are glad their hats can’t talk,” Scott says. Some customers bring him hats that they purchased in the 1950s, and a few that are beyond the reach of refurbishment. “They don’t want to let that hat go,” he says. 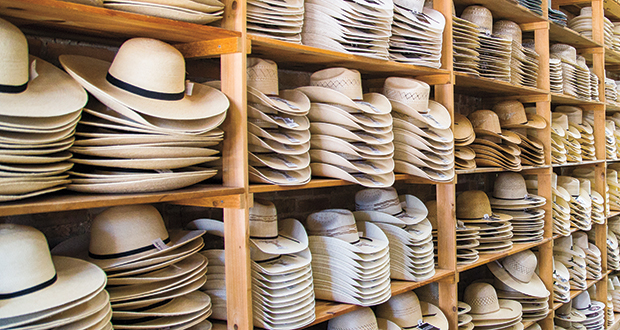 Catalena Hatters got its start in downtown Bryan in 1983. Even at that time, hatmaking was a dying art form, with hatmakers going out of business across the country. Sammy Catalena and his new bride, Carolyn, scooped up hatmaking equipment from those stores, clinging to the dream that they could make a go of it.

“I didn’t know anything about hatmaking,” Carolyn Catalena says. “I remember our first order [to stock the store] was $3,000. I stayed awake at night worrying. I thought, ‘How are we going to do this?’”

Three decades later, Catalena Hatters has made a name for itself across the globe for its quality hatmaking. The business, which now includes sons Scott and Travis as well as a few longtime employees, handcrafts up to 4,000 hats per year, shipping them to locations as far flung as Australia, where they have a loyal consumer base.

Willie Nelson, Aaron Watson, and Charlie Daniels have all donned Catalena hats, and the Catalena Cowgirls—a precision rodeo drill team of about 20 cowgirls and paint horses— have carried the Catalena name through all of Texas’ major rodeos since 1990.

Unlike so many mom-and-pop businesses that struggle to survive, the Catalenas have reached a point where they are at maximum capacity, and they’ve made a conscious choice to stay small.

“We’ve had people want to sell our hats in their stores, but that’s not what our goal is,” Carolyn says. “We want to make sure our customers are happy.”

The conversations the staff has with each person who walks in reveal the intimate level of customer service the store provides, whether a customer is purchasing an inexpensive straw hat, a 10x entry-level rabbit felt hat, or the shop’s premium quality hat—the 100x, made of beaver fur which can run upwards of $800. (The x-factor represents the quality of the hat, mainly based on the density of the fur.)

“The busier you are, the less time you get to spend on each hat with each customer,” Scott says. “And you lose what you are.”

The store stocks dozens of hats of each color and quality with an open crown and flat brim that can be styled and shaped to a walk-in customer’s preference—or they can be special-ordered.

How a hat becomes a hat

A hat starts its life as a hat body—a floppy, fuzzy rough draft of a hat with little shape or panache. It then goes through a dozen different steps, including blocking for just the right size, and sanding by machine and hand to shave down the fur. Light-colored hats get treated with petroleum jelly and a powder coating to even out the color.

Workers sew silk into the lining of each hat, and depending on a customer’s desire, they’ll add ribbons, braided horsehair, or a buckled felt band to adorn the crown and make the hat special.

And lastly, there is the crease, which is shaped to each customer’s specification.

The crease gives the hat its real sense of character, and you can tell a lot about the person wearing the hat and even where he or she is from by the way it’s shaped, Scott says.

“You start going west, you see the telescope crease (that’s a flat circular top on a shorter crown); in the east you see the cattleman (a dressier crease on a high crown),” he says. “Hat shapes are very regional, even within Texas. You’ll see a bigger brim and higher crown in Amarillo, and a shorter Cattleman’s crease in Houston.”

The Gus crease, a style worn by Robert Duvall in the miniseries Lonesome Dove, has grown in popularity in recent years, Scott says.

The smooth, sleek wool of a custom hat is counterbalanced by its thick, hefty brim, curled into just the right shape that seems like it will never unfurl for all the rodeos or two-steps its wearer might undertake. And indeed, with the exception of a few in-store “tune-ups” now and then, these hats really are made to last.

“It’s an extension of your personality when you wear a hat,” Carolyn says. “It’s more than a pair of gloves or boots.”

It’s why people make pilgrimages to Bryan from Mexico to custom-order their hats, and why it becomes a family tradition for four or five generations, “from toddler to great-grandpa,” to get measured in the modest storefront on Main Street.

“I grew up in here,” Scott says. “This [hatmaking] becomes part of your identity. It’s just what we do.”