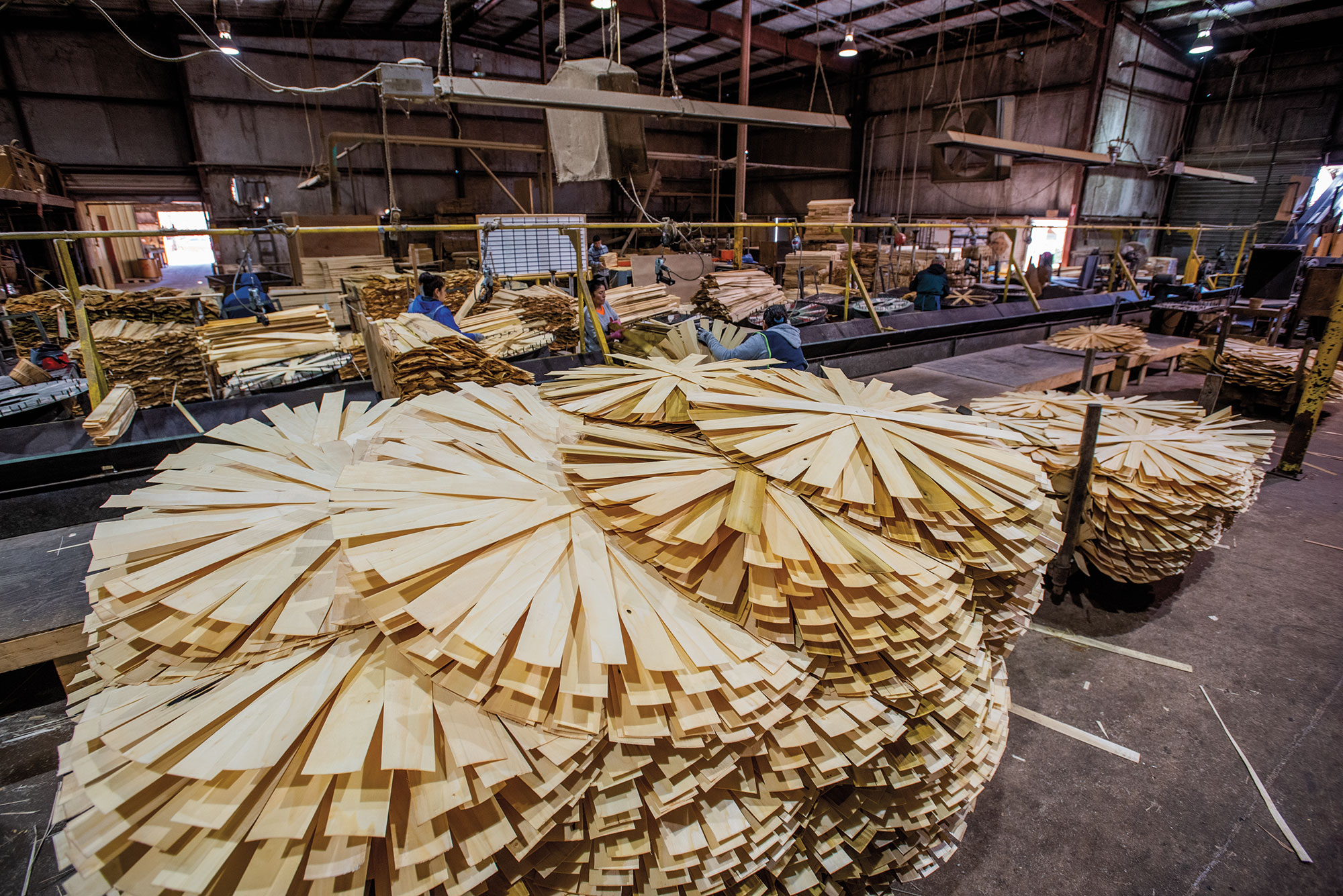 Stacks of stapled staves will be shaped into baskets used for everything from crabs and cucumbers to arts-and-crafts stores. Photo: Michael Amador

On any given day, the Texas Basket Company thrums with the rhythm of workers and steel machinery turning logs into wooden baskets. The product could be hard-bottomed baskets destined for Chesapeake Bay crabbers, bushels bound for New Jersey cucumber farms, or display baskets that will one day show off merchandise at Williams Sonoma.

The Jacksonville manufacturer, which celebrates its 100th anniversary this year, has churned out millions of veneer baskets since it opened in 1919, surviving amid changing times from its home along the railroad that first brought this East Texas town to life.

The East Texas manufacturer has churned out millions of wooden baskets since it opened in 1919.

In many ways, the daily challenges of running a century-old basket factory are similar to those of any small business hustling to survive.

“There’s always something to do and obstacles to overcome,” says Martin Swanson, company president. But for Texas Basket, challenges such as finding logs and maintaining sales long ago faded into routine, a backdrop for generations of resilience and change.

“We’ve had a little bit of everything to make things interesting,” says Swanson, who bought the factory with his father in 1976. “We had a big fire here about the same month we were trying to buy the place. There have been three fires here through those years, actually, and we had a tornado and a train derailment.”

There have been triumphs as well, including the launch of a factory retail store in the 1980s—a bustling shop that sells baskets and a variety of gift items—and a diversification of basket products that has helped Texas Basket survive as the only remaining factory of its kind in Texas, and one of just a handful in the United States.

The Texas Basket Company’s origins are linked to Jacksonville’s history as a center for peaches and tomatoes, which took root as commercial crops in the 1890s. According to a local history book published for the city’s centennial in 1972, Cherokee County’s peach industry hit its peak in 1912 with the shipment of more than 1,000 rail cars of fruit. By the 1920s and ’30s, farmers in the county planted 15,000 acres in tomatoes, and Cherokee County was exporting 3,000 cars of tomatoes every summer.

The industry employed thousands of people, from the farms to packing sheds and factories making boxes and baskets. Over time, Jacksonville became known as “The Tomato Capital of the World,” and in 1934, the town held its inaugural Tomato Festival. Jacksonville High School’s football team still plays in the Tomato Bowl, a stadium that opened in 1940 and is currently under renovation.

“There’s something about the soil here,” says Shelley Cleaver, a member of the Cherokee County Historical Commission. “Farmers were raising cotton, and they realized they could make more money off an acre of tomatoes than an acre of cotton. What they would do is pick them green and put them in these railroad cars where they had blocks of ice on each end, and then send them up north. By the time they’d get there, they’d be getting ripe.”

When it opened in 1919, the Texas Basket Company (then called Slover Box Co.) was one of six such factories in Cherokee County. Farmers used baskets to take their crops to town, where they lined up their tomato-laden Model T farm trucks along Commerce Street—nicknamed Catfish Row. Packing sheds would buy the tomatoes, then load up train cars for shipment around the country.

Cleaver’s aunt and uncle worked for Texas Basket Company’s predecessor “for a lifetime,” he says. “This would have been in the 1930s and ’40s, and when I was a boy I used to go with him and fire up the boiler on Sunday nights. I thought that was the biggest place in the world.”

While electricity now powers the factory, Texas Basket still feeds its wood scraps into the fire box of that same hulking, 85-horsepower boiler to produce steam for its logs. The company works with soft hardwood trees such as sweetgum, cottonwood, birch, and elm, all logged within a 300-mile radius, Swanson says. 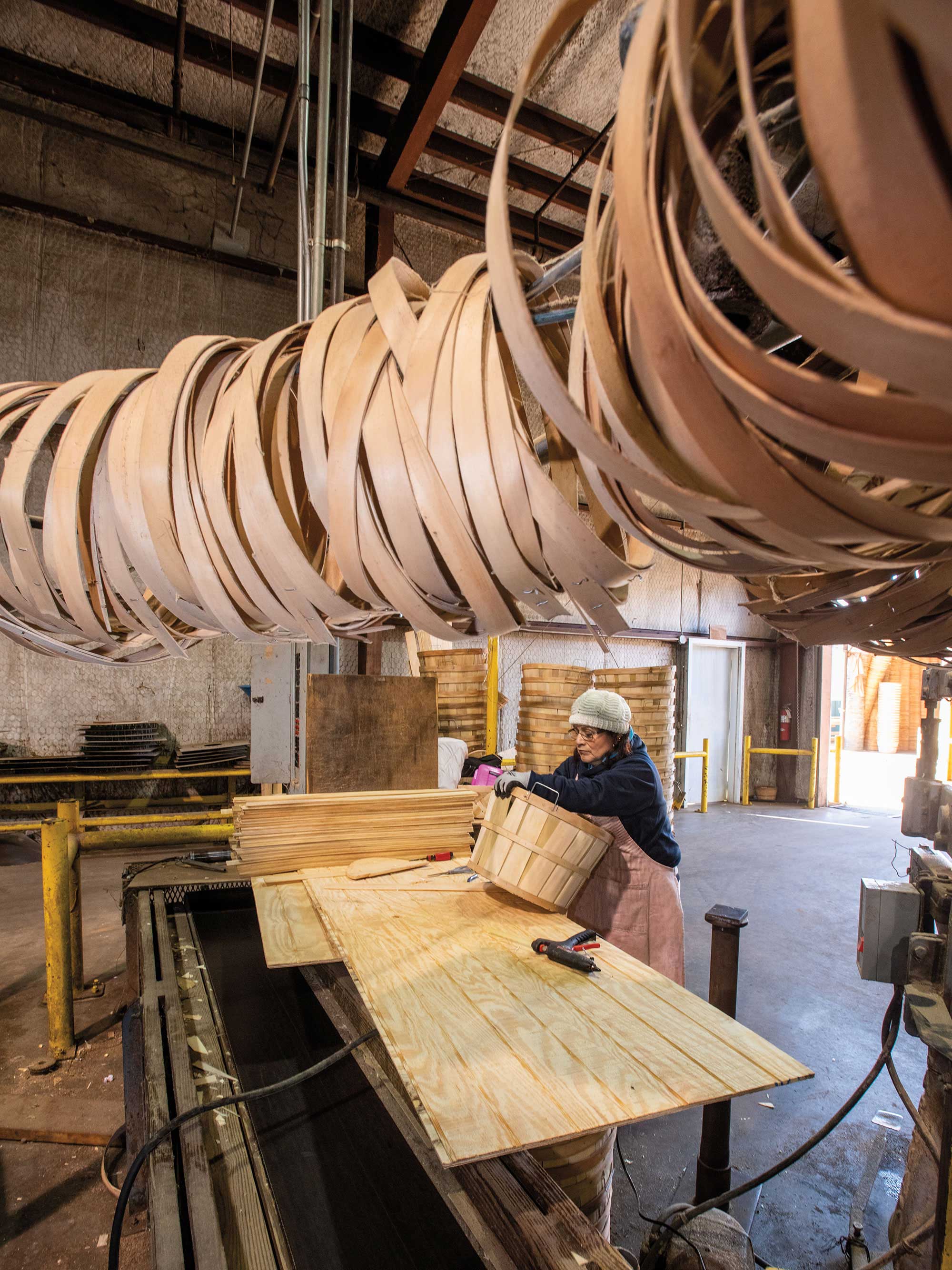 A Worker applies a wooden band around a basket to strengthen it. Visitors can watch the factory floor from an observation room. Photo: Michael Amador

After trucks deliver the trees, a debarking machine strips the bark. The logs are cut, doused in water, and then draped in a tarp to be steamed overnight to make the wood pliable. The next day, workers feed the steamed logs into a lathe, which peels them into sheets of wood called veneer. A clipper then chops the veneer into long rectangular strips known as staves. Workers place the staves onto trays to create woven web patterns akin to sunrays or asterisks. Next, a stapler joins the nexus, and then a basket machine shapes the flat webs into baskets. Staplers secure bands around the diameter to add strength.

Many of the machines are antiques dating to the 1930s, and David Haberle knows them like the back of his hand.

“He’s got baskets in his blood,” Swanson says of Haberle, the company’s executive vice president. Haberle’s grandfather, Fred Haberle, brought the first basket machine to Jacksonville in 1896, from Michigan—it’s now displayed on the factory grounds. David worked for his family’s basket plant until it closed in the 1970s, and he joined Texas Basket in the ’80s. “I just love it,” Haberle says. “I’ll come over on Saturday afternoon or Sunday just to walk through and pet it and say thank you.”

The factory employs about 90 people and makes 5,000 to 10,000 baskets a day. Agricultural customers make up about 30 percent of the company’s customer base, down from 100 percent when Swanson took over in mid-’70s. Much of that business was lost to cardboard and plastic containers. Swanson set out to diversify, expanding into arts-and-crafts shops, candy shops, grocers, home goods stores, and elsewhere. The factory’s “handmade department” makes baskets in countless shapes ranging from state outlines to armadillos and hearts. “Nobody wants the Colorado basket because it’s square,” Swanson says.

Business is holding steady, Swanson says, though the headwinds never subside—the internet, and particularly Amazon’s squelching of small arts-and-crafts retailers; competition with grass and reed baskets from eastern Asia; and ballooning expenses. Nevertheless, a 100th birthday is a milestone worth celebrating and a worthy excuse to take a deep breath.

“I definitely wanted to make it to a hundred years,” Swanson says. “Frankly, I don’t know what else I would do. And there are a lot of people that depend on this place for their living, and we feel some loyalty to them. We’ll just try to keep it going as long as we can.”

It doesn’t take visitors long to get the hint that Jacksonville is proud of its tomato heritage—maybe it’s the painted concrete tomato sculptures adorning nearly 200 local business fronts. On the second Saturday of June, the community’s fondness for the tangy fruit is on full display during the Jacksonville Tomato Fest (June 8, 2019), an annual celebration of the tomato harvest. Along with events like a 5K run and a car show, Tomato Fest honors its namesake by judging homegrown tomatoes and holding contests for tomato eating, tomato peeling, tomato packing, and salsa. Local farmers are also on hand selling produce. If you can’t make it for Tomato Fest, two produce sheds draw tomato junkies from far and wide throughout the growing season (roughly May to November): The Tomato Shed, 461 Alabama Ave., and Guinn’s Produce, 1603 S. Jackson St. Both carry a variety of produce.