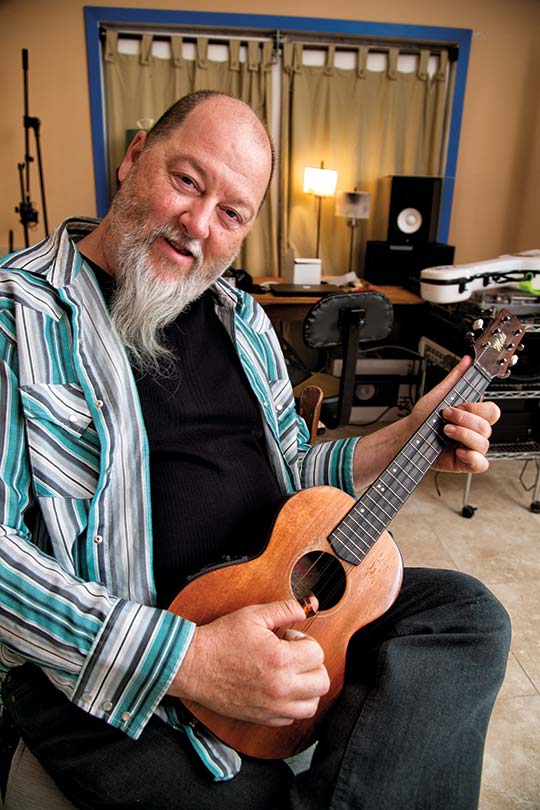 Austin musician Kevin Russell likes to recount a conversation he had with the late Doug Sahm, a sort of musical godfather to Russell, in which Sir Doug postulated about the great singers of Texas. “He was like, ‘You’ve either gotta have that West Texas dust or that East Texas rust,’” recalls Russell, frontman of the band Shinyribs. “And he said, ‘You’ve got both of those.’”

Check out Shinyribs music and upcoming tour dates at www.shinyribs.org, or download the band’s app for Android or iOS.

You can hear that geographical span in the mash of country and soul that Shinyribs performs across Texas and beyond, upwards of 150 nights a year. With idiosyncratic songs that conjure subjects from a lovable Sour Lake freeloader to the flies of Limpia Creek, Shinyribs draws on the roots of American music to create a sound that’s at once singular and familiar. The band’s third album, “Okra Candy,” is due out in early 2015.

Shinyribs’ performances are first and foremost a hoedown, captained by Russell himself, who sweeps any cobwebs of inhibition from the room with his own devil-may-care display of floppy-armed, Supremes-like gesticulating and jigging. Strains of rhythm-and-blues, country, and rock drive the sound of the six-piece band, whose songs can range from ukulele ballads to disco-infused boogie and truck-drivin’ jumpers. Throw in covers from luminaries like Willie & Waylon, Bill Withers, The Band, Muddy Waters, and TLC, and before you can find a place to set your beer down, the dance floor is bustling with everyone from two-year-olds to baby-boomers.

“It’s a joyful music and it translates to anybody, really,” Russell says. “They’re just pop songs. I’m mining a similar territory that has been done all along, but I feel like I’ve gotten good enough at this point that it has an original element to it that’s personal from me.”

The 47-year-old married father of three has been developing his guitar chops and buttery-brass vocal style for 30 years as a working musician. Russell was born and raised in Beaumont until his father’s job in the oil-supply business took the family to Humble and then to Shreveport, Louisiana, where he graduated from high school. Russell moved to Dallas in 1991 with the band Picket Line Coyotes, and then to Austin two years later.

In 1994, Russell co-founded the Gourds, a rambling roots-rock outfit playing self-described “music for the unwashed and well read.” The Gourds recorded 10 studio albums, became one of Austin’s most beloved acts, and developed a devoted fan base across the country before disbanding in 2013.

Russell, who mostly plays guitar and six-string ukulele in Shinyribs, started Shinyribs in 2007 as a one-man-band side project. (The name came from a transient woman who panhandled on a corner near Russell’s house. Russell gave her a plate of barbecue one day, and from then on, she would shout “Shinyribs!” every time he drove by.) The project grew into a four-piece over time—fellow Gourd Keith Langford on drums, Winfield Cheek on keys, and Jeff Brown on bass. Picking up steam in 2013, Shinyribs added the Tijuana TrainWreck Horns—Mark Wilson on sax and flute, and Tiger Anaya on trumpet. “I’m hooked on that brass gravy,” Russell admits.

Shinyribs’ distinctive hillbilly rhy-thm-and-blues can be traced in part to Russell’s boyhood in southeast Texas and Shreveport.

“The stories that went along with the musical history of the place—that was the biggest influence on me there in Beaumont,” he says, mentioning the likes of George Jones, Janis Joplin, the Winters brothers, and Johnny Preston. “And the environment also has a big influence on me. All the times spent out in the woods, the shell roads, walking around the old oil pumps. I love the rice fields, the flora and the fauna there.”

The expanse of Texas, along with its diversity of peoples, contributes to the outsized spirit of Texas music, Russell says. And, in a roundabout way, the state’s religious and political conservatism also fuels creativity.

“Texas is a great place to rebel against when you’re young,” Russell says. “There’s an oppressiveness sometimes to the culture in Texas. Austin’s got a long tradition of rebellious lifestyles and culture—the music reflects that—and I think Austin has a huge influence over the rest of Texas musically.”

That’s not to say that Russell isn’t conservative in his own manner, such as his appreciation for the craft of making records. For “Okra Candy,” Shinyribs recorded the songs starting with the bare-bones structure of guitar and drums, adding instrumentation to complement each specific song.

“It’s going to have a different sound, a different feel, on almost every song. You can’t sell that very easily because it’s all over the map,” Russell says. “But I’m from an era as a fan when every song was treated unto itself as a special thing. And I think that’s how records should be made. Now, I know records maybe are not important any more, but they are to me, and they always will be. I can’t change that. It’s hard-wired. It’s like being a Dallas Cowboys fan. I can’t change it. I tried.”