Texas Rollercoasters: May the G-Force Be With You 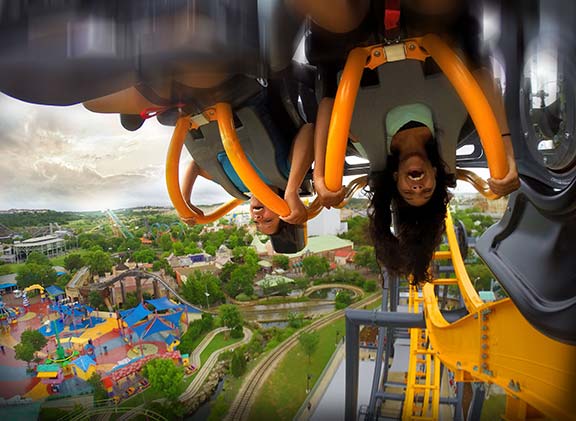 The fun is in the anticipation, say some, in the moments before you take the plunge, eyes wide open. Others praise the adrenaline rush and elements of surprise that make you feel unmistakably alive. I love all of it, but also the euphoric moments afterwards, when I can’t wait to repeat the experience.

Air Time: A sensation of weightlessness, when you come out of your seat (usually at the crest of a hill.) Also called negative gravity, or negative Gs.

Heartline spin: A corkscrew-like rotation with your heart as its axis.

Out-and-back: A classic coaster layout that follows an elongated oval, then returns to the station.

Positive Gs: The forces that pull you downward into your seat, at the bottom of a hill or inside a loop.

Safety dog: Also called a ratchet. The steel bar that runs below certain coaster trains and makes that “clack, clack, clack” as the coaster climbs a hill; it keeps the train from rolling backwards.

When I set out a few years ago to ride as many of Texas’ coasters as I could, I had no idea what adventures would unfold. I met new friends, laughed so much my sides hurt, and learned interesting bits of history they don’t teach you in school. Catherine the Great loved rollercoasters. So did Albert Einstein. And Charles Lindbergh supposedly said that the famous Coney Island Cyclone was more exciting than flying solo across the Atlantic.

Having never flown solo over the Atlantic, I can’t compare. But I can imagine, and that’s the point. To me, riding a good coaster feels like flying. It feels like commanding my own spaceship over an exhilarating landscape of dips, flips, and dives. It feels like being a nine-year-old again, when new sensations presented themselves at every turn, and I’d holler for the pure fun of it in my backyard. That’s why people love roller coasters—because they’re fun.

Luckily for thrill-seekers, Texas has plenty of coasters to keep things interesting. The three big amusement parks—the two Six Flags parks in San Antonio and Dallas and SeaWorld San Antonio—have the state’s most thrilling and technically advanced rides. Instant acrobat status can be yours: Just step right up, strap in, keep your eyes open, and remember to breathe. But smaller parks in Amarillo, Lubbock, and El Paso offer thrills without the chills—and they’re a blast, too.

Steel coasters, with their soaring, brightly painted, Spirograph-inspired architecture, promise multiple flips, double loops, heartline spins, G-forces comparable to taking off in fighter plants, and racy plummets of breathtaking speeds and lengths. In contrast, Texas’ fabulous wooden coasters (“woodies” to those who love them) are intricate, lattice-like structures that creak and moan and look elegant in the setting sun.

What are you waiting for? I’ll meet you in the front car.

It’s tough to rank a favorite coaster, as any number of variables affect a coastering experience. Do you like the smooth speed of steel or the bumpy freedom of a classic woodie? Are you in the mood for an extreme adrenaline rush, or do you simply want to holler like you were a kid again? Here are nine of my favorites—and one I’ve yet to try. 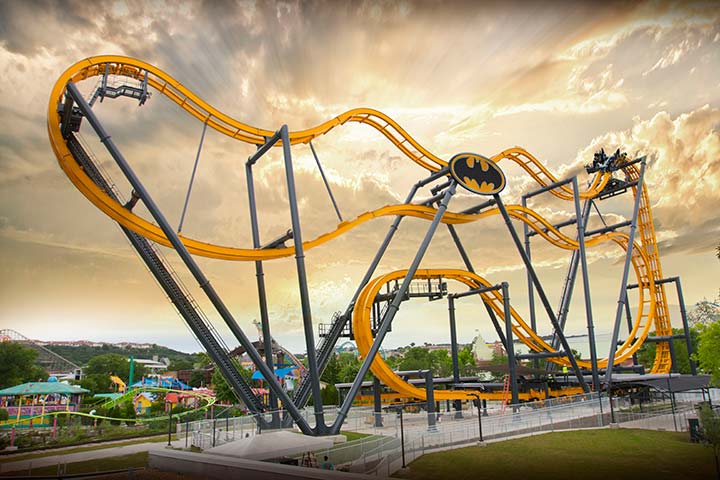 The Steel Eel, Sea World San Antonio. A 15-story initial dive send you gleefully plummeting. This one is good for exercising your vocal chords—yaaaaaaaaaaaaaa!

The Great White, Sea World San Antonio. Twisty, turny, flippy, joyful. Riding the Great White, with your legs dangling beneath you as you rock and roll across the track, feels like flying.

The Iron Rattler, Six Flags Fiesta Texas, San Antonio. Get loose with it. Lean forward, and try to keep your eyes open as the coaster zooms toward the cliff.

The New Texas Giant, Six Flags Over Texas, Arlington. An initial 153-foot lift sets the stage for this classic marriage of steel and wood. With speed, air time, and 21 drops, this coaster has it all.

The Titan, Six Flags Over Texas, Arlington. Dubbed a “hypercoaster” since it’s more than 200 feet tall, the Titan has a 255-foot initial drop followed by two back-to-back 540-degree spirals. Repeat after me: 85 mph.

And finally, here’s one for my summer wish list: The all new Batman: The Ride at Six Flags Fiesta Texas. This one-of-a-kind coaster uses magnetic fins to create six full inversions and a true free-fall after a dramatic 12-story drop. I’ll report back!