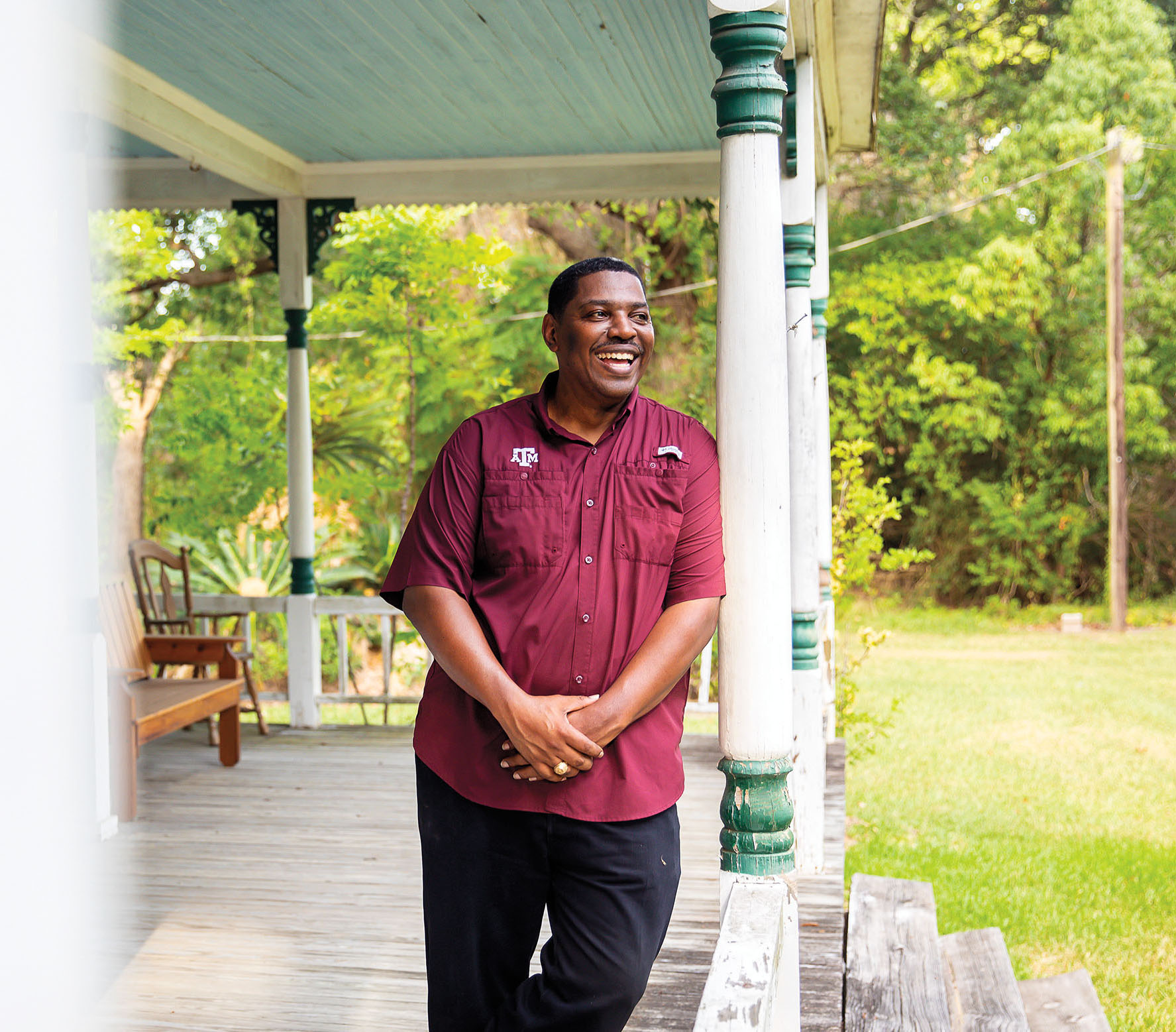 Samuel Collins III, a financial consultant and historical preservationist, restored a Hitchcock home that dates to the 1880s.

Before Galveston and Houston were connected by rail, boats plied Highland Bayou between the two Gulf Coast cities. Farmers settled along the bayou and Galveston Bay in the mid-1800s, forming a community that became Hitchcock in the 1870s. The settlers included Henry Martyn Stringfellow, a Confederate veteran renowned for his organic farming practices. Over the decades, Stringfellow Orchards eventually fell into disrepair before Samuel Collins III bought the remaining 10 acres in 2005. Collins, 51, was born in Galveston, grew up in Hitchcock, and now lives in neighboring La Marque with his wife, Doris. He restored the property’s 1880s Victorian residence as an office for his financial consulting business. Collins has long been active in promoting the area’s African American heritage, including fundraising for the Absolute Equality mural in Galveston. An advistor to the National Trust for Historic Preservation, Collins has hosted Juneteenth celebrations at Stringfellow and says he’d like to someday open it as a park and a link to local history.

“I would’ve never imagined that I would have 10 acres in the center of town. I didn’t know all of the history when I had an opportunity to acquire the property. It’s not included in our history books. After I researched the story, Mr. Stringfellow’s connection to the formerly enslaved and the African American community was strong because he offered 30 Black men the opportunity to work there and get paid $1 a day. This was the early 1880s, when the going rate was 50 cents per day. The other planters and growers in Hitchcock were upset with Stringfellow, but he paid them what he felt was fair. He took the high road because the low road was crowded during the late 1800s.”

“My dad’s family and my mom’s family lived in Galveston. But land was cheaper in Hitchcock. My mother’s family moved off the island, and my dad’s family stayed. They met at Lamar University in Beaumont. At the corner of Highway 6 and Mike Street, my grandmother used to have Odessa’s restaurant—soul food. That’s where I learned to walk. When my mother was working, I stayed with my grandmother. I grew up in a little green and white house on Mike Street. I used to think it was the biggest yard in the world when I had to cut it. Many birthday parties in that front yard.”

“The Hitchcock Red Raiders is like a rite of passage for boys. As a little boy, I felt like I’ve got to play little league football. Some kids come from other cities to play in the Hitchcock league because the coaches do a good job.”

“We always look forward to the Good Ole Days Festival every year in August. Growing up, my grandmother and I used to always go get an Italian sausage sandwich. There was a ‘Miss Good Ole Days.’ Whose girlfriend is going to win Miss Good Ole Days? That was a big thing. They bring out different rides for the kids like the merry-go-round and games with prizes. I think you’ll get 13,000 people. For our town, that’s big.”

“Hitchcock is a bedroom town. The jobs are in Galveston at the hospital, insurance, and tourism businesses. Mainly, the best-paying jobs are in Texas City at the petrochemical plants and businesses that support that.”

“When I was a child, my dad had an apartment two blocks from the beach. Anytime I was over in Galveston, we’d be out on the beach or on the Seawall. My grandmother fished all the time. They had places closer to Hitchcock on the bay. My grandmother used to fish out there long before it was all developed. Now, there’s a gated community with million-dollar homes.”

“Hitchcock is a diamond in the rough. It’s special because of the people in it. At the post office, somebody mailed a letter from Austin and they wrote ‘Sam Collins, Hitchcock Texas.’ No address. The postmaster of course knew who I was.”