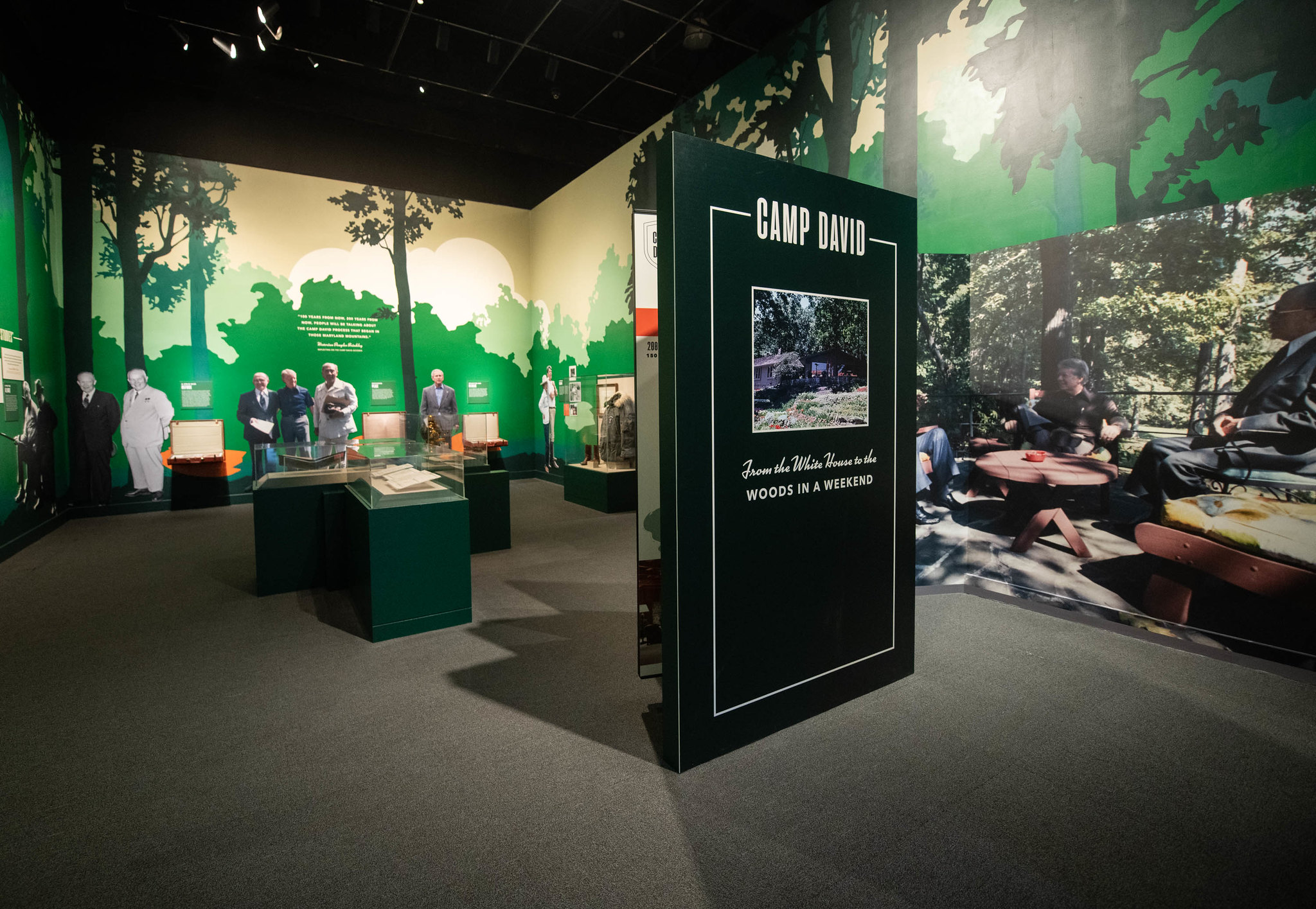 Maybe Ladybird Johnson said it best—“To me, Camp David is more a psychological journey than a physical one…I leave my troubles outside the gate.”  As visitors this summer to the George W. Bush Presidential Center in Dallas will discover, presidents seize opportunities to depart Washington, D.C. The Center’s exhibit on presidential retreats, which runs through Oct. 6, highlights Camp David and three Texas-related venues: LBJ Ranch in the Hill Country, George and Laura Bush’s Prairie Chapel Ranch near Crawford and the Bush family compound, Walker’s Point, in Kennebunkport, Maine, as well as identifying other getaways, including Harry Truman’s Florida White House in Key West, Herbert Hoover’s rugged Rapidan Camp in Virginia’s Blue Ridge Mountains or a succession of presidential yachts.

In addition to the current Presidential Retreats exhibit, the Center houses a permanent exhibit of the Bush presidency, including a replica of the Oval Office. Local and Texas cuisine is available at Café 43, including Laura Bush’s favorite tomato, avocado and mozzarella sandwich.

In an introductory video, Bush observes, “The White House, even though it’s magnificent, it’s like living in a museum. And, when we came to Crawford, it was like living in our home.” Photos show him in safety glasses attacking a cedar tree with a chain saw, as he explains, “to get rid of some of the stress that naturally occurs when you are president.” The saw and a cedar log are on display, as is one of his original oil paintings of the modest ranch house exterior.

Unlike formal accounts of presidential accomplishments, the exhibit humanizes presidents, perhaps because they fished for trout, played horseshoes, hiked, cooked out and fired water pistols at family members, as shown in a photo of President Obama at Camp David. With limited press access, they lived outside the fishbowl—as numerous inscribed quotes on panels and photographs articulate. Even so, visitors are reminded of historical events that occurred at Camp David, viewing Jimmy Carter’s handwritten notes to Israel’s Menachem Begin and Egypt’s Anwar Sadat that led to the Camp David Accords.

Nancy Reagan’s diminutive cowboy boots and Reagan’s fur-lined Camp David jacket and aviator sunglasses are on display, as is a panel with First Lady Patricia Nixon’s assertion to Mrs. Reagan, “Without Camp David, you’ll go stir-crazy.” More touching: a recollection of George W. Bush’s trip there after the 9/11 attacks during which he and cabinet members gathered at Laurel Cabin to sing hymns, including “His Eye Is On the Sparrow.”

The exhibit’s focus on LBJ Ranch in Stonewall and Lyndon Johnson’s legendary hospitality refers poignantly to “The BBQ that never was”—aborted plans to honor President John F. Kennedy the evening of Nov. 22, 1963. By then, JFK was dead at the hands of an assassin in Dallas and Johnson would be president. Also included: scenes of happier times with grandchildren, a checkered tablecloth and table settings for LBJ’s outdoor dinners, a life-sized photo enlargement of him roping a calf, and a manikin displaying his striped swim suit and shirt. 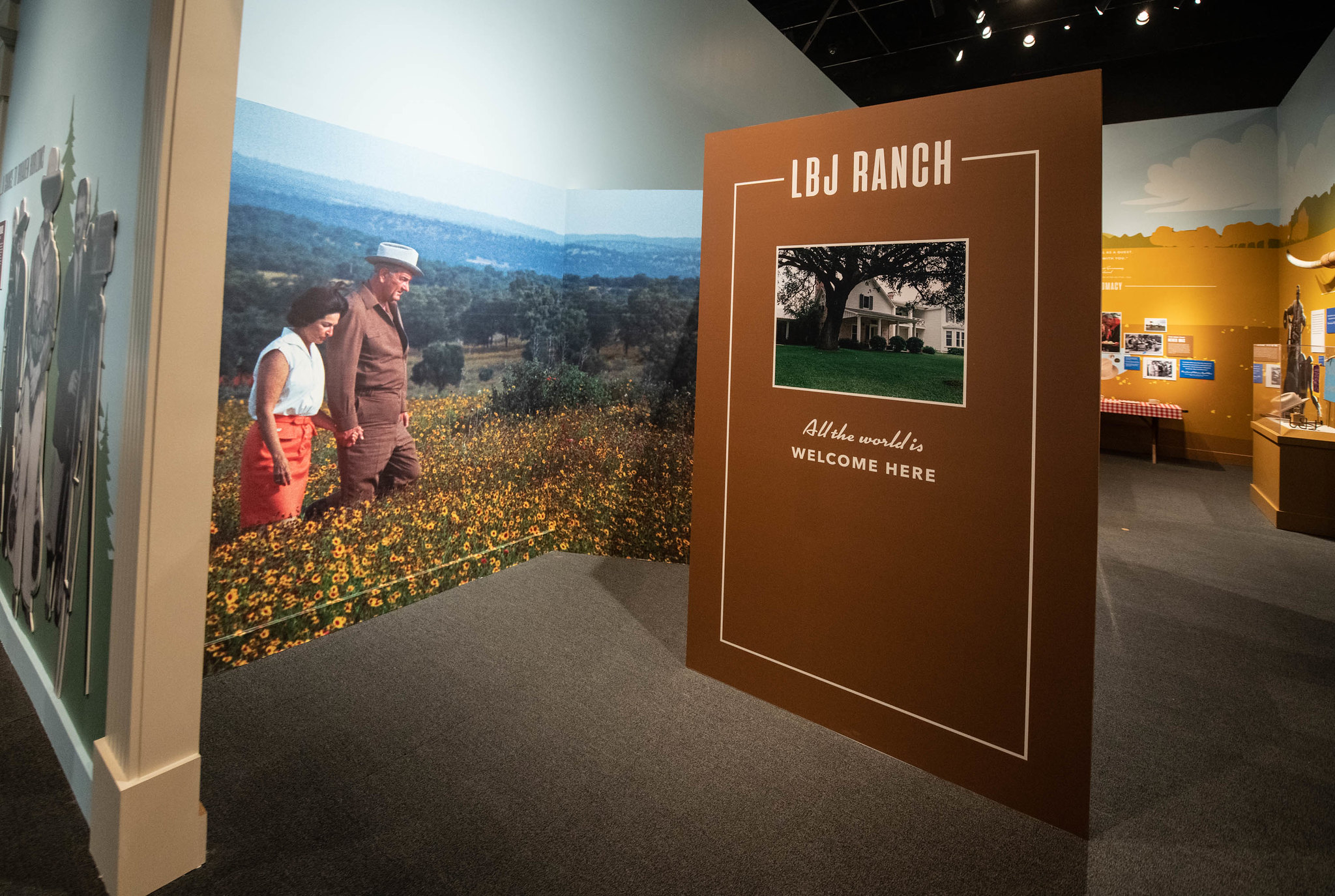 Of the four featured retreats, LBJ Ranch, now part of the LBJ National Historical Park, is the only one accessible to the public. Camp David, secluded in Maryland’s Catoctin Mountains, is a Naval installation, George and Laura Bush split time between Dallas and the ranch in Crawford, and Walker’s Point still hosts extended family gatherings, like daughter Barbara Bush’s wedding last year. LBJ’s Texas White House is closed for structural repairs, but LBJ Ranch driving tour remains open, as does the hangar visitor center and LBJ’s boyhood home.