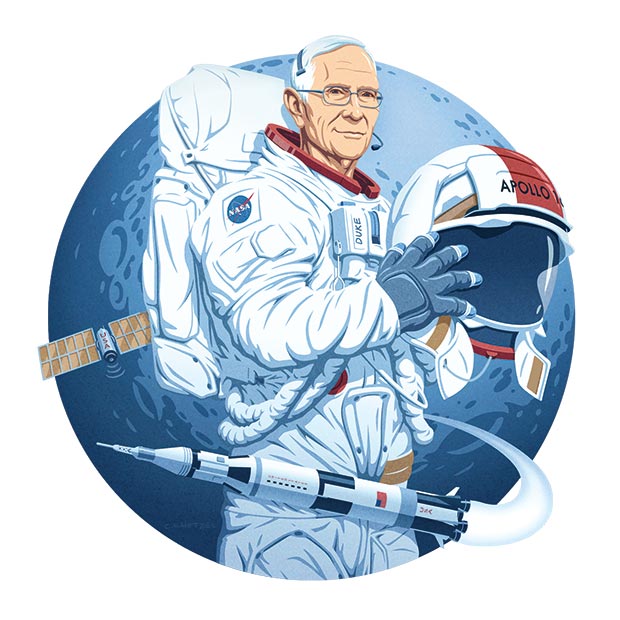 Only 12 people have walked on the moon, and New Braunfels resident Charlie Duke is one of them. Duke became the 10th astronaut to walk on the moon as part of the Apollo 16 mission in 1972. It was a life-changing experience for Duke, who was the first person to collect moon rocks from the lunar highlands. And the 82-year-old still shares his observations frequently as a guest speaker at events across the globe.

Raised in South Carolina, Duke joined NASA in 1966 after studying at the Naval Academy, enlisting as a pilot in the Air Force, and earning a master’s degree in astronautics and aeronautics from the Massa-chusetts Institute of Technology. Duke’s career coincided with NASA’s Apollo program, the gargantuan effort to send a man to the moon as President John F. Kennedy called for in his famous 1961 moonshot speech. As a result, Duke had a front-row seat to many of the American space program’s signature achievements.

During the Apollo 11 mission—NASA’s first moonwalk, immortalized by Neil Armstrong’s “one small step for a man, one giant leap for mankind” remark—Duke served as CAPCOM (capsule communicator), speaking directly with the astronauts from his Mission Control desk at Houston’s Manned Spacecraft Center (now the Johnson Space Center). During Apollo 13—a 1970 mission that served as the basis for the 1995 movie starring Tom Hanks—Duke was part of the backup crew and witnessed the harrowing events unfold from Mission Control.

“A thousand years from now, the 20th century is going to be remembered for the Apollo program.”

Whereas Duke went on to fame as the lunar module pilot for the Apollo 16 mission, many of those serving in a support capacity back at the space center remained largely unknown. A documentary released earlier this year, Mission Control: The Unsung Heroes, sheds light on those remarkable individuals, including Duke. For Duke, who retired from NASA in 1975 to settle in New Braunfels with his family and pursue business interests, the documentary brings back vivid memories.

Q: What do you think of the new documentary?

A: I thought it was about time that Mission Control got recognized. They saved the day on so many flights. Apollo 12 got struck by lightning twice at liftoff. Then there was Apollo 13. We had planned to support two guys for three days, but instead we had three guys and four days. And they saved our landing on Apollo 16.

Q: How did the Apollo 16 experience change your perspective?

A: When we were orbiting the moon, I could see Earth in the sky. It was a half-Earth, so it seemed to be getting smaller and smaller. It was more white than anything—polar ice caps and clouds. You could see some blue, which was the water, and just a little bit of brown. You don’t see national borders from the moon. You can hold out your hand, and Earth fits in it. I remember just the wonder of it all, seeing this different perspective of where we live.

Q: Does anything compare to the feeling of being on the moon?

A: Not in a physical way. The landing on the moon was the most dramatic moment of my flight career. It was a challenge to land—there were rocks all over the surface. Once we got out, I found it to be just a lot of fun. After we got used to the bulky spacesuits, we had a good time bouncing around and driving around on the moon. Nothing on Earth can compare to that experience.

Q: What do you miss about the Apollo program?

A: It was such a dynamic program. Changes were always being made to the spacecraft and in the schedule. You never sat in your office and twiddled your thumbs. After Apollo was over, I went to work on the space shuttle program from 1973 to 1975, but it was just meetings, nothing as dynamic as Apollo. But maybe I left the program too soon. I miss the excitement of Mission Control and the friendships that we established.

Q: Why did you move to New Braunfels after NASA?

A: I wanted to finish up my military career in the reserves at Randolph Air Force Base, and I also had business opportunities in San Antonio; it was close enough to commute. We had come to New Braunfels during my time off at NASA and had camped at Canyon Lake and floated on the Comal River. We loved the community. It reminded us of El Lago, where we had raised our boys and where a lot of astronauts, engineers, and technicians lived.

A: We like to go to the San Antonio River Walk and drive into the Hill Country, to Fredericksburg and Enchanted Rock. If the weather is decent, we’ll float in the Comal River, and we’ll take them to Gruene Hall to enjoy some country music. For real good food, there’s Pat’s Place in New Braunfels. It’s just a country diner but with great enchiladas, hamburgers, and chicken-fried steak. We love the outdoors. We’ve floated the Rio Grande a few times and have paddled canoes down the Sabine River to see a rookery. Once, we stayed up at Indian Lodge in Fort Davis for a couple of days and went to a star party at the McDonald Observatory.

Q: Why are people still drawn to the Apollo story?

A: Probably half of the world’s population was not even born when we did it, so we have a whole new audience. Grandparents are telling their grandchildren about that time, how exciting it was, and getting them interested. Plus, it was one of the greatest undertakings of mankind ever. Sure, it must have been something to work on the pyramids in ancient Egypt, but in modern times, it was a great achievement. A thousand years from now, the 20th century is going to be remembered for the Apollo program.

Charlie Duke chronicles his experiences during and after NASA in the book Moonwalker.