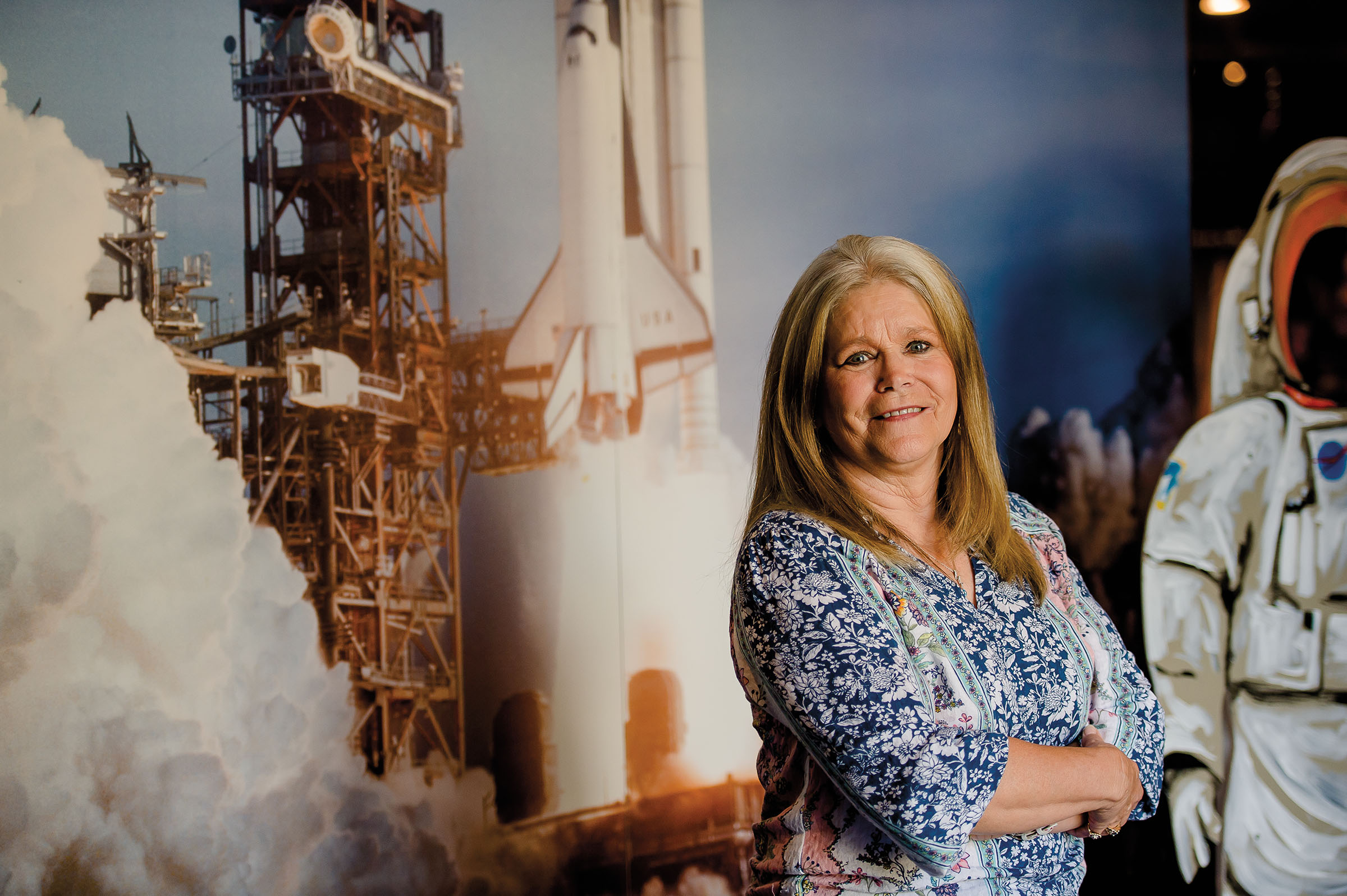 As a tour guide at the Columbia museum, Belinda Gay interprets a defining event in Hemphill history.

Hemphill sits on the edge of the Sabine National Forest, about 10 miles west of Toledo Bend Reservoir and the Texas-Louisiana border. The forest and the lake, which is part of the Sabine River, make this area a paradise for birders, hikers, hunters, and anglers. The forest took on a different distinction on Feb. 1, 2003, however, when recovery workers converged on Sabine County to search for remnants of space shuttle Columbia. Returning from a 16-day scientific mission, the NASA shuttle unexpectedly broke apart when reentering Earth’s atmosphere, scattering debris across the area. Belinda Gay, a Hemphill resident since 1998, was one of the many locals who rushed to help in the recovery effort, scouring the forest for signs of the wreckage and coordinating volunteers. She and others later worked to establish the Patricia Huffman Smith NASA “Remembering Columbia” Museum, which opened in 2011 to honor the seven astronauts killed in the disaster. Today, Gay keeps their memories alive by serving as the vice president of the museum board and by leading regular museum tours.

“The museum is a tribute to the seven astronauts of Columbia, Columbia’s 28 missions, and the legacy of all those who made her fly. There are display cases for each of the astronauts and the two people who lost their lives in the recovery. We display personal items from the astronauts that were with them on the ship, as well as flight suits, dog tags, their favorite books and poems—things that meant a lot to them. In our classroom, we have a functional flight simulator built from actual parts, some of which have flown in space. People from all over the world visit. We get astronauts and engineers who worked on Columbia here all the time.”

“When they made Toledo Bend Reservoir [in 1969], it brought fishermen to the county. We have around 10,000 people in our county, and on weekends that number will double or triple because of people coming to the lake to fish. Most people come to fish for bass, but some fish for crappie or catfish or alligator gar. Others come for waterskiing and swimming. A lot of birdwatchers also come here. We have several birdwatching facilities and nature trails, like the 28-mile Trail Between the Lakes in the Sabine National Forest. We have the red-cockaded woodpecker, a protected endangered species. The other day I saw three kinds of woodpeckers all together: a pileated woodpecker, a little bitty downy woodpecker, and a red-
cockaded woodpecker.”

“The Gaines-Oliphint House is one of the oldest remaining log homes in Texas [built in 1818]. It’s a log cabin near the 3-mile bridge that crosses the reservoir. We also have the historic Sabine County Courthouse, and next to it is the Historic Jail Museum. It still has its hanging tower. When it’s open, you can go in the jail cells and where the gallows were.”

“On the courthouse square, there is the Athens Cafe—a new Greek restaurant—Slice Pizza, and Sabean’s Coffee & Creamery. The pies and cakes at Pineywoods Pie Co. are the bomb. On the lake, there’s Fin & Feather Bar and Grill, which has great homemade onion rings, catfish, gumbo, and crawfish.”

“Hemphill is one of those towns where everybody knows just about everybody. And they take care of their own. If something happens, there’s always someone there to pick up the slack or lend a hand. During the recovery of Columbia, my husband and I oversaw the local VFW post, and they asked us to open it up as a staging area. I searched for three days in the woods before I had to come back in to help him because there were so many donations and volunteers coming in. The federal team didn’t take over the feeding [of the searchers] until day 16, so we organized it as a community. We served home-cooked meals for about 800 to 1,000 people three times a day for 16 days. The museum is not about the tragedy of Columbia, it’s about the legacy. It’s also a tribute to this community. It takes everybody doing their part to make the big picture happen.”