In Praise of Tex-Mex with TV Chef Pati Jinich 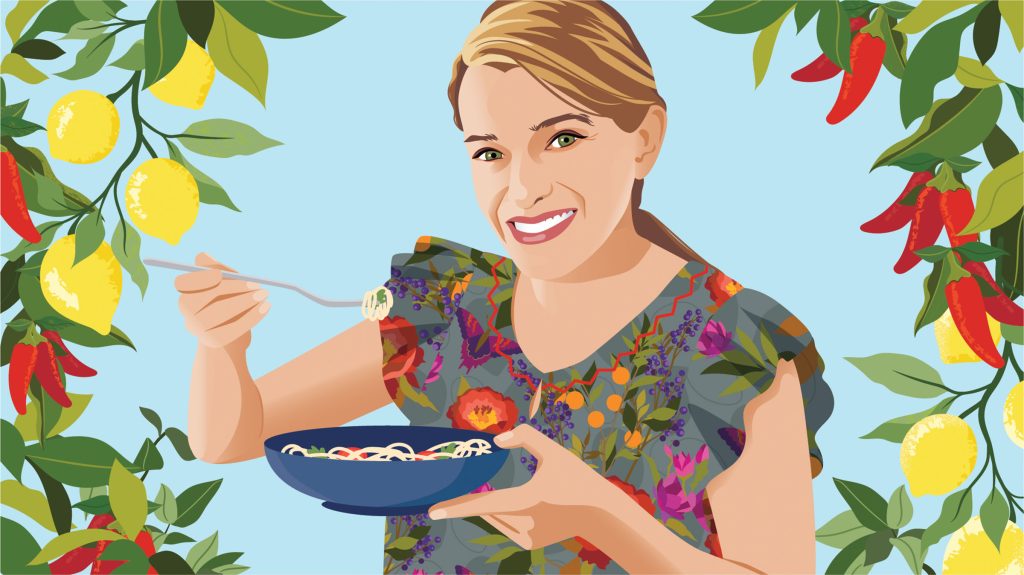 Almost 10 years ago, while on tour to promote one of her cookbooks, Pati Jinich visited the U.S.-Mexico border for the first time. “I was standing at the Rio Grande where Laredo and Nuevo Laredo meet, and I was like, ‘What is this force?’” she recalls. “I could feel the flow of hundreds and thousands of lives that have passed through there.”

Born and raised in a Jewish family in Mexico City, Jinich is best known for her Emmy-nominated and James Beard Award-winning cooking show Pati’s Mexican Table, which opened its 11th season on PBS in mid-September. But growing up, Jinich didn’t dream of becoming a chef. “I’ve always been a very good eater, but I wasn’t a good cook,” says Jinich in her distinctive chilanga (Mexico City) accent.

Jinich wanted to be a political analyst. She earned a master’s degree in Latin American Studies from Georgetown University and worked at a policy research center in Washington, D.C. But when she felt nostalgic for Mexico and her family’s dishes, Jinich turned to cooking to find a cure for homesickness. In the process, she found her true calling.

In 2021, after more than a decade of traveling between Mexico and the U.S. to make Pati’s Mexican Table, Jinich returned to the Texas border for a new docuseries called La Frontera, which not only covers food but also transcends cooking with its exploration of border culture. The first season aired last fall, and a second season is expected to air next year on PBS and Amazon Prime.

“I felt it was my responsibility as a Mexican and American,” says Jinich, who lives in the D.C. area with her husband and three sons. “As someone who has Mexican and American kids—and who explains and understands the world through food—I wanted to try to bring a microphone to the very misunderstood Texas-Mexico border and the world of Tex-Mex food.”

TH: How did Texas play into your American journey?
PJ: After I got married, my husband and I moved to Dallas in 1997 for his job. I remember my years in Dallas with a lot of fondness today, but when I first moved, I was lonely and homesick. My husband used to travel all the time. I remember going to the supermarket, trying to find ingredients to replicate the meals I was hoping would make me feel at home. This was 20 years ago. There wasn’t the richness, the diversity you find in stores today. And I remember really sheltering in trying to recreate the foods that I missed. I would dream with caldo de pollo simmering in my kitchen, the steam of beans cooking in a pot. I started calling my family and asking them how they make their arroz rojo, their frijoles de olla, their salsa. Not being able to visit Mexico, I developed a really strong relationship with Mexican food.

TH: Dallas is also where the seed for Pati’s Mexican Table was planted.
PJ: I still wanted to be an academic; I was working on my thesis. One day I heard KERA, the local public TV station, was working on a documentary about the Mexican Revolution. That period was a big part of my thesis so I thought, I can help there. I found their address and knocked on the door. They said, “We’re already wrapping up that project, but there’s another show you can help with. They need a production assistant, an intern. There’s no money, but if you can get to Mexico, we could use your help.” The show was [Southwestern chef] Stephan Pyles’ New Tastes from Texas. It was my first connection back to Mexico through food. I was the only one who spoke Spanish, so I became their translator in Oaxaca. I had been so hungry and so homesick for Mexico, and I got back by explaining it through food.

TH: How long did you live in Dallas?
PJ: Almost three years. My first son, Alan, was born in Dallas. We call him our Tex-Mex boy. Then we moved to Washington, D.C. Here I did my master’s and worked so hard toward becoming a political analyst, working in a think tank. Eventually I resigned, enrolled in cooking school, switched careers, and found my way to trying to build bridges through food rather than through political analysis. I find it so much more comforting and rewarding because you can eat your research.

TH: What’s the one thing about Texas you wish people who’ve never visited knew more about?
PJ: I wish people knew how not shallow Tex-Mex is in terms of food and culture. Everybody who doesn’t know Texas thinks of its food and culture as something that’s narrow and defined. Even the food, they think, Oh, it’s just hard-shell tacos or breakfast tacos. Then you realize there’s this rich diversity—different regional uses of chiles and salsas.

TH: What was the impulse behind La Frontera? It uses food to showcase the U.S.-Mexico border, but it’s a documentary, not a cooking show.
PJ: As my platforms became stronger and had a wider audience, I felt this responsibility to delve into deeper, more meaningful topics. I wanted to bring the microphone to places that either don’t get attention or only get attention to the bad, demonizing topics—at the border it’s the drugs, the crime, the cartels, the illegal immigration. Border communities are living their lives and doing businesses that are enriching these two countries. They’re international, bicultural, have two languages and sister cities, and are working together in incredible ways nobody’s talking about. So, I was like, “I’m gonna go to the border and bring the microphone without an agenda, just to shine a light on what is life in those places, to help change the narrative, so it’s not so narrow and harsh.”

TH: Did you discover any favorite Tex-Mex dishes?
PJ: I love a good burrito with freshly made flour tortillas. The burritos I tried in Juárez and El Paso were insane. But I couldn’t just tell you one thing. The tacos I ate in McAllen and Brownsville were incredible. The Tex-Mex I tried in the Rio Grande Valley was like no other Tex-Mex in terms of the richness—the flavor, the ingredients. I love Texas breakfast tacos. I love the traditional San Antonio Tex-Mex food. And I do love queso. Mexican purists complain about Tex-Mex queso, but I think it’s just addictive.

TH: You have dedicated your work to connecting the two countries you call home. Why do this through food?
PJ: The most noble way to understand who we are, where we come from, and what we can do is [through] food. There’s power in recipes because they go beyond the individual and a single life. We get to this Earth, and these recipes are here; we inherit them. By the time we’re gone, the food and the recipes remain. There’s such beauty in jumping into that food space because it allows us to understand things we wouldn’t be able to grasp, or to communicate things we wouldn’t be able to talk about, just by eating it. You and I can have different political views or come from different backgrounds. But if you share with me your grandmother’s soup, you’ve already brought the wall down. And when I sit down to taste it, we’re connecting on a different human level. With every recipe I share, I am grateful when I get a response from somebody sharing a photo of what they made. And they tell me, “I made this recipe with my grandmother. She hadn’t been able to find it, but now I’m making it with her. But by the way, I changed this.” I’m like, “Yay for you because that means that recipe is now yours.”