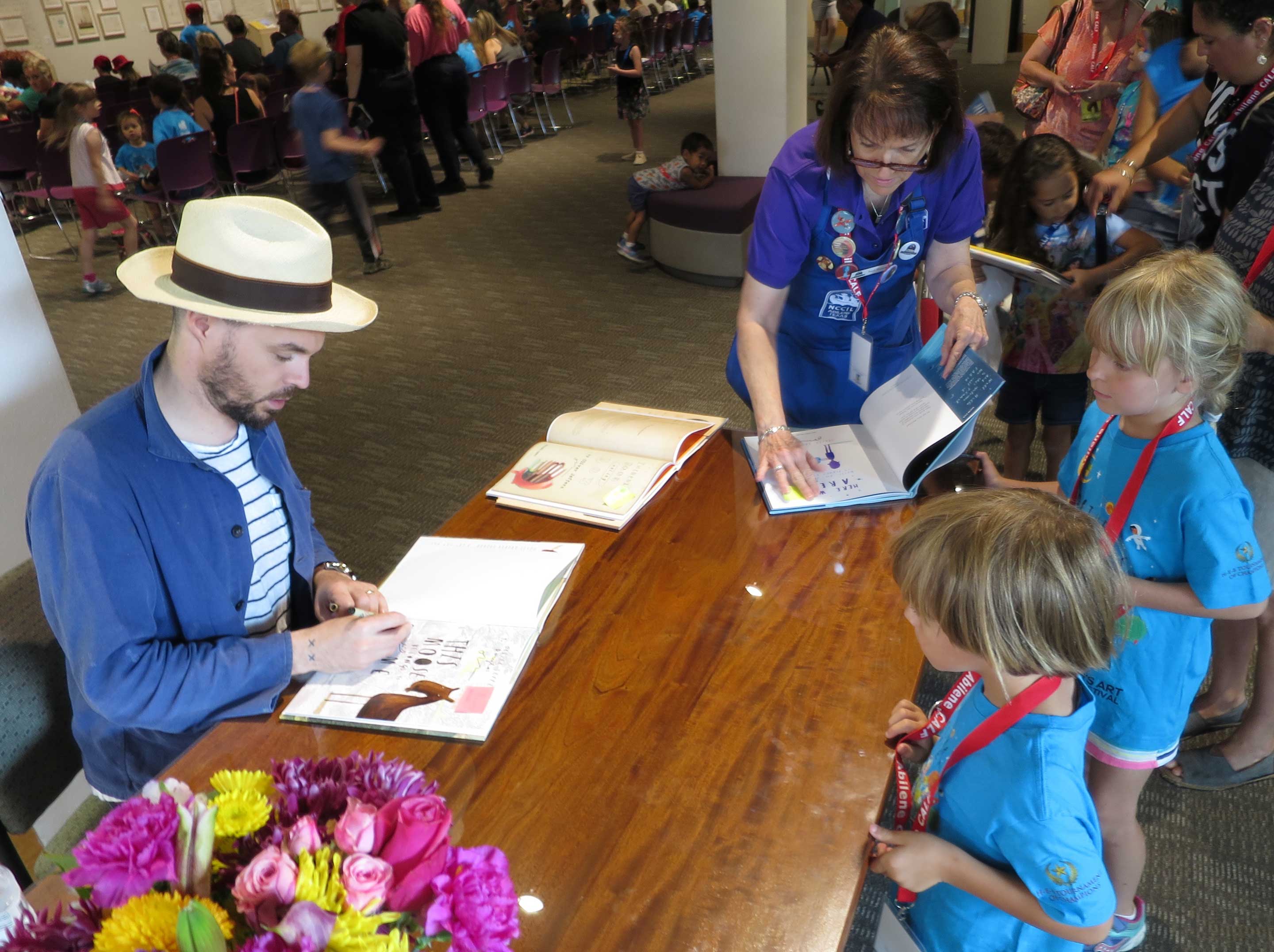 Oliver Jeffers has sold millions of children’s picture books, traveled the globe as a renowned artist, and even collaborated on art projects with Irish rock stars U2. But the Belfast-bred, New York-based creator of children’s books had never experienced a parade like the Storybook Parade he took part in in Abilene this past weekend.

The 40-year-old Jeffers was the featured artist at this year’s Children’s Art and Literacy Festival, Abilene’s seventh annual summer celebration of picture books. For three days, children and their parents took in dramatic readings of Jeffers’ hit books—such as The Great Paper Caper, Lost and Found, and The Incredible Book-Eating Boy—movies in the restored Paramount Theater, arts and crafts activities, children’s music, and much more all designed to inspire young readers in the “Storybook Capital of Texas.”

Stay tuned for a story in Texas Highways in advance of next year’s Children’s Arts and Literacy Festival. In the meantime, you can see an exhibition of Jeffers’ work in Abilene at the National Center for Children’s Illustrated Literature (NCCIL), on display through Sept. 30, 2018. And at the Abilene Convention Center, you can see Jeffers’ characters in sculpture form in the Adamson-Spalding Storybook Garden. Marcel and Wilfred, from Jeffers’ This Moose Belongs To Me, is the 24th installment in a fanciful sculpture collection that decorates downtown.

Now, about that parade?
That was a pretty fantastic moment. It’s funny because parades where I’m from have a very different connotation. Belfast is very contested. The loyalist Protestant population celebrates the defeat of this Catholic king 600 years ago, and it becomes very aggressive and there’s violence, and people do bonfires and it’s ugly. So Catholics tend to stay away from that. So being part of a parade that’s actually joyous and inclusive and celebratory was really pleasant. I was grinning from ear to ear, and my son [2 years old] was dumbfounded. He didn’t know what to make of it.

What is it like to see your work presented as a fine-art exhibition at the NCCIL?
The work that’s out there is but a drop in the ocean really, but just seeing it all laid out like that and the scale and the scope and the span that it crosses, it’s quite grounding really. There have been exhibits before but not quite like this in terms of a lot of the sketch work and the preparatory work and the thinking behind the work, and also never across books. It’s always been one or two books together, never sort of a sweep like this, so it’s incredible. It makes me feel old though.

What are your impressions of Texas?
Southern hospitality lives up to its reputation. The heat is one thing, but it’s a different sort of heat than you get in New York because there’s no humidity, so the heat’s more bearable than I thought it would be. But the people are wonderfully hospitable and everybody is very generous with their time and energy.

How long does it take to put together one of your books?
It just depends on the book. It averages out about one a year, but then I’m also doing other things. I’ll get to a certain point in the book and then work on another project and then come back. That sense of perspective and fresh eyes is as good as another editor, because you can see things that you might have been blinded to before.

At what point do you have a sense that the book’s concept is viable?
Normally when I get to the thumbnailing, because it’s got to have a strong beginning, strong middle, and a strong end. And sometimes you’ve two of those things but not the third. Once you realize the book has no resolution or the resolution feels flat because there was no real middle, then you kind of know.

What would you tell an aspiring artist interested in your medium?
At the book signing, a little girl asked me, “What do you do when you make mistakes? What do you do with those drawings?” Honestly that depends on whether it’s just on a loose sheet of paper. If it’s on a sketchbook I leave it so I can remember it and move on. If it’s on a loose sheet of paper, sometimes I’ll keep it, but a majority of times I’ll turn it over and draw on the other side. I tried to put it in as simple as terms as possible: You make more mistakes than you get things right. You just learn to embrace that.

You work across a variety of mediums—color collage, oil painting—but your artwork retains a distinctive look. How does that happen?
When I was in art college, somebody once said whether I’m doing figurative paintings or whether I’m doing illustrations or whatever, they said, “I can always tell it’s you.” And I took that as an insult back then, because I’m trying to do these different things. But now I realize that’s one of the greatest compliments I could’ve been paid. Because it’s distinctively me. And I think getting out of your way is one of the best things you can do for yourself as an artist. Just listen to the way your hands want to make art, and be as honest about that as possible. When you’re starting off, you do end up copying a lot of people’s work. I did that with Asterix comics. I would draw the way that looked. And then I learned that I don’t do it the same way, so I started to listen to myself. But I think some of the best art is when you’re not trying to make it look like anybody else, you’re just making.