My Hometown: Presidio Has Been a Frontier Crossroads For Centuries

Arian Velazquez-Ornelas works at Fort Leaton, a relic of the town’s storied past 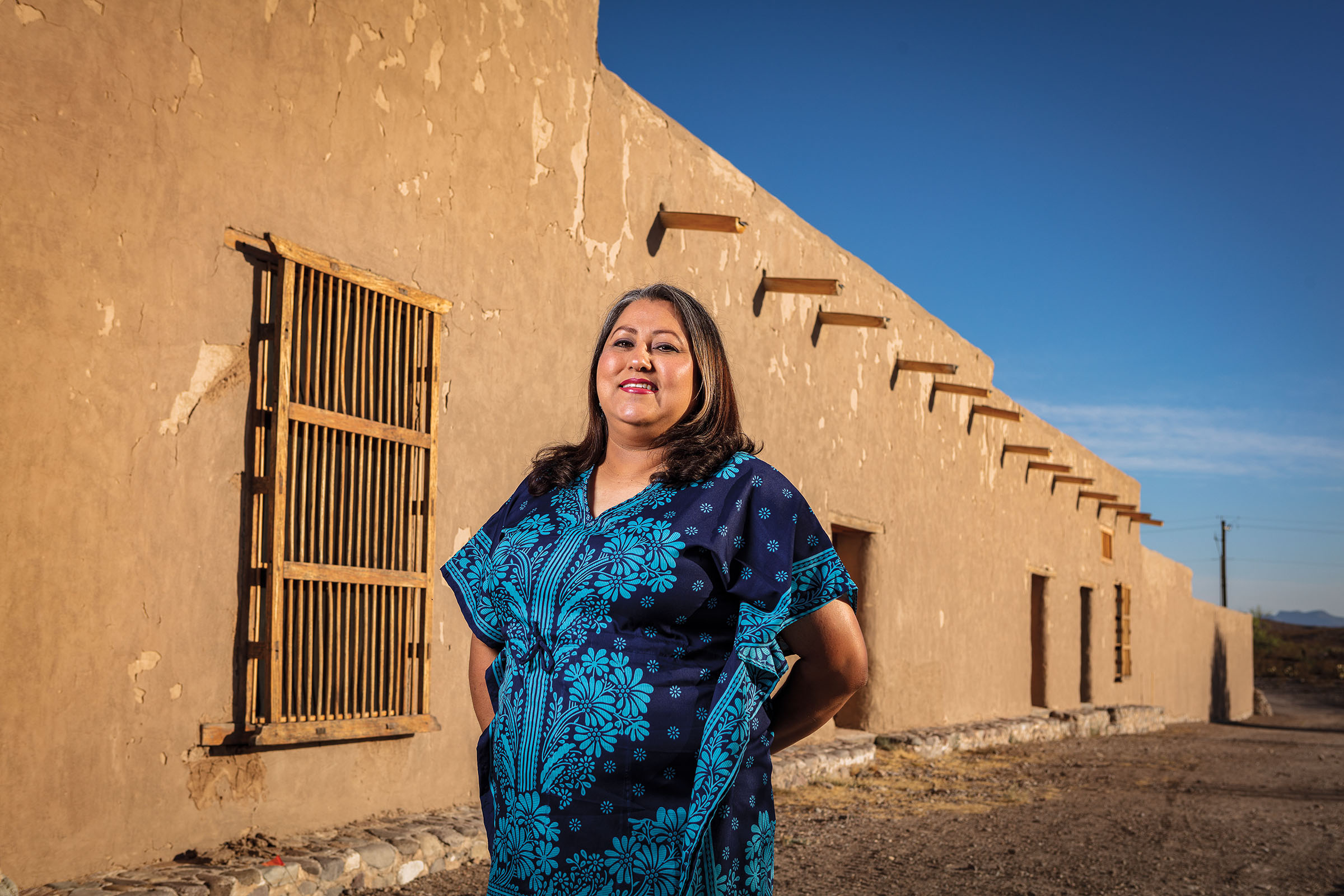 Arian Velazquez-Ornelas works at Fort Leaton State Historic Site, an adobe Spanish fort that was converted into a trading post along the Chihuahua Trail in the 1840s.

Located near the junction of the Rio Grande and Rio Conchos, Presidio has been a frontier crossroads for centuries. The Spanish encountered Indigenous farmers here in 1590, ushering in a clash of civilizations involving Spain, Mexico, the U.S., and tribes including the Jumano, Apache, and Comanche. Today, Presidio is anchored by local businesses, U.S. Customs and Border Protection offices, and the Presidio Independent School District, which is the town’s largest employer. Arian Velazquez-Ornelas moved with her family from California to Presidio when she was in ninth grade. It was a homecoming for her parents, who were from Ojinaga, Presidio’s sister city on the Mexican side of the border. Now a mother of two grown children, Velazquez-Ornelas volunteers as the head of the Presidio Convention and Visitors Bureau and serves on the city council. She also works at Fort Leaton State Historic Site, a preserved 1840s trading post and the western gateway to Big Bend Ranch State Park.

“Fort Leaton is the largest preserved adobe structure in Texas, and people going to the state park or national park stop here. In town, we have our historic church, Santa Teresa de Jesus, and the American Legion is right next to it. Across the street, there’s a mural that represents the first Christmas in Texas. And there’s a statue of the Virgin of Guadalupe, where a lot of people stop for pictures. We’re working on a walking tour.”

“I work at the fort, and my passion really is to become an interpreter and to bring our history to the schools and bring them out here. Something I’ve been grappling with recently is trying to give more context to what the Indigenous people had to go through. For the ones who stayed here, they had to trade with people who were essentially their enemies just to survive because there was nothing here. But it was the Wild West—that’s what life was like during that era.”

“There are only a few identified graves at the Cementerio del Barrio de los Lipanes [the historic Lipan Apache cemetery], but the majority of the families know of a relative buried there. A couple of years ago, the county gifted the land back to the Lipan Apache nonprofit group. But it’s not marked, so we’re trying to raise some funds to build fencing, and a historical marker has been approved and minted.”

“It’s a popular stop because it has a lot of the stuff that’s not allowed to be brought in from Mexico anymore, like fresh jalapeños and Mexican bologna. And it also has sweet breads and Mexican cookies. It used to be easier to drive into Mexico. When we were in high school, we were able to go get lunch and come back in time for school. Now it’s gotten into a bottleneck effect where you spend a couple hours on the bridge.”

“In this region, you’ll hear people say the river has never divided us. We have mountains all around, and the water comes down into the river. It’s always been what brings us together. Everybody has family in Mexico, everybody will go and visit them. Ojinaga has always been our sister town.”

“Basically, the kids rule this region. If you have an event and you want people to come, invite the schools, and you’ll get a crowd. We make sure the kids are recognized at the end of their seasons, and the parents just love it. It’s great because when people first move here, they see that the kids are well raised, well behaved.”

Everybody Knows Your Name

“I considered myself an outsider when I first got here, but everybody was friendly. They saw me sitting in the cafeteria and invited me to sit with them. And so, I started to get to know people and see how close they were and realized how many people you’re related to. My husband was born and raised here. His family is part of the Prairie Grass Band of the Lipan Apache that moved down here as part of a peace treaty in 1790. Basically, you throw a rock and you hit a cousin. But really what I guess attracts people is the quietness, the stillness of far West Texas and the desert. You come out here for the isolation and the close-knit community.”