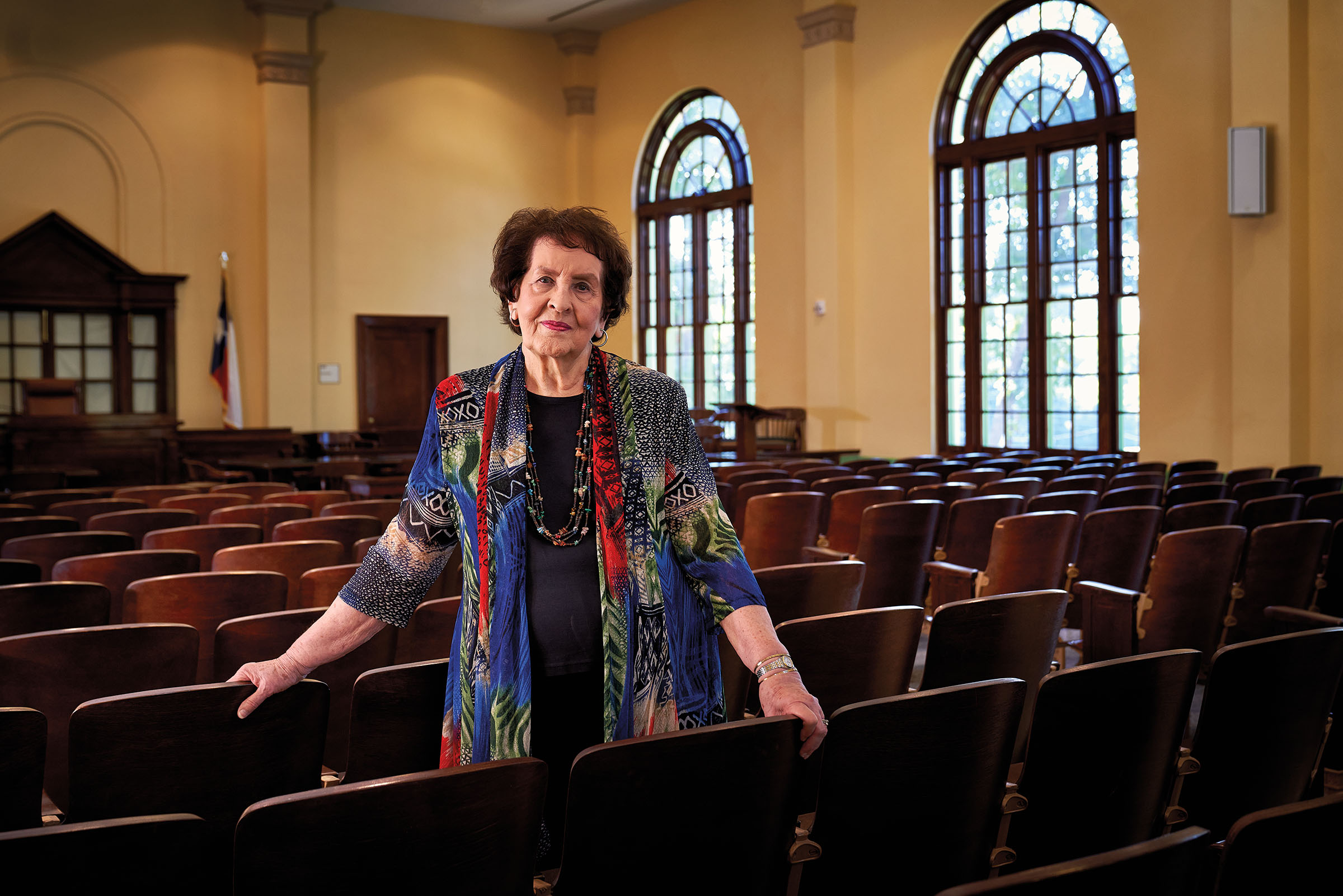 Known as the “Cradle of Texas,” San Augustine has a rich history predating the Texas Revolution. The Spanish built Mission Dolores along El Camino Real in 1719 to serve as an outpost among the native Ais tribe. In the 1830s and ’40s, San Augustine was home to many influential Texans, including Sam Houston and James Pinckney Henderson, the state’s first governor. San Augustine today is known for its historic architecture and a rural economy based on the poultry and timber industries. Lifelong resident Betty Oglesbee has had a hand in many of the town’s restoration projects through her fundraising role with the San Augustine Garden Club. “I don’t know how to not be involved,” says Oglesbee, 86, who raised four sons here with her late husband, John Oglesbee. “I have to care. If I think there is something to do to help, I have to try. I feel like I have to stay busy.”

“Just think of the history oozing in every direction. Everything has a story behind it. We are putting together a self-guided tour of the Augustus Phelps homes [from the 1830s]. The soon-to-be restored Mission Dolores museum at the mission site on the Ayish Bayou is fascinating. If you’re interested in genealogy, our library has an outstanding department. The jail museum contains a history of San Augustine law enforcement officers, plus the late Willie Earl Tindall’s outstanding Texana collection. And you have to go to San Augustine Drug, on the square, and have a [nonalcoholic] grapefruit highball, invented by pharmacist Casey Jones in the late 1920s.”

“I am working with the San Augustine school district superintendent, Virginia Liepman, to restore the old rock gymnasium. We raised more than $5,000 locally to put in new windows. The gym is a Works Progress Administration project from 1939. We’re also working on replacing the doors. It’s going to be used as a gym again. It still has gorgeous hard­wood floors.”

“Since El Camino Real comes straight through San Augustine, it’s worth driving out to the Lobanillo Swales, 10 miles east of town. This roadway was carved first by buffalo, wild horses, and deer, then continued by Spanish priests and soldiers, and their burros, oxcarts, and wagons, as they established the Spanish missions in the early 1700s. The El Camino Real de los Tejas National Historic Trail Association raised the money to purchase the tract five years ago. Interpretive signage, with maps, timelines, and early history, tells the entire story.”

“The Mission Dolores site is now operated by the Texas Historical Commission. It hasn’t happened yet, but if I can live long enough, we want to go to the Legislature and get funding to build a replica of the mission on the site. I really think that will attract visitors and school buses filled with kids. We received a $75,000 grant from Texas Parks & Wildlife and raised another $125,000 to build a children’s park in town across from the law enforcement center. And we’re working with TPWD for funding for a wetlands park on 10.5 acres along the Ayish Bayou, which runs through the middle of town.”

“Rural East Texas around San Augustine County is a sight to behold in all seasons, but particularly in the fall. In October and November, the region is transformed with the reds, golds, browns, and yellows of sassafras, red maple, sumac, hickory, oak, Chinese tallow, and sycamore. You can get brochures and maps at the chamber.”

“We have the best people here. We’re a poverty-level county, but people are so generous. When we did the courthouse renovation, people gave because it’s the ‘People’s House.’ People would stop on the street to give the treasurer a $10 bill. We had to raise $657,000 to get the match from the Texas Historical Commission. We ended up with 30 or more pages, single-spaced, of people who gave to the restoration. I just think we have caring people here.”